In the first installment of this series, we covered the commercially available cartridges based on the .308 Win. case that could be run in the AR-10 platform. This time around, we’re looking at the outliers of the .308 Win. cartridge family – the .308 wildcat cartridges available from boutique manufacturers at best, or require handloading at “worst.” If you’re anything like me, though, there’s nothing more therapeutic than reloading, so maybe this article will up your spirits, just as these cartridges up the performance capabilities of and applications of the .308 Win. case.

At its smallest, the .308 Win. case’s neck was sized to .224 caliber. Jim Carmichel and Fred Huntington created the cartridge in 1970; Kenny Jarrett did the same thing with the .243 Win. case (see the previous article as to why that’s relevant), and both had the same goal. However, Carmichel’s case was a tad bit faster, in part because it pushed the shoulder forward by 20 degrees (from 20 to 40) rather than a 35 degree shoulder as on the .220 Jaybird. Both cases used the same principles P.O. Ackley’s “Ackley Improved” design did to other cartridges. The result? The .22 Cheetah cartridge pushes a standard 55-grain, .224-caliber bullet more than 4,000 fps, beating the fastest .22-caliber cartridges like the .224 Weatherby, .22-250 and .220 Swift by 500 fps or more, the .223 WSSM by at least 100 fps, and Jarrett’s own .220 Jaybird by almost 50 fps (all loads based on Hodgdon’s reloading data using a 55-grain bullet, and H4350 powder). The two downsides to either the .22 Cheetah or the .220 Jaybird cartridges is the turnover rate for barrels is fast, and while neither cartridge is efficient based on diminishing returns; max loads top out at 51 grains of H4350 for the .22 Cheetah, and the .220 Jaybird uses four fewer grains of H4350 (8-percent less) for a negligible loss. For perspective, Ackley’s famed .280 AI cartridge shoots a 168-grain bullet using half a grain of H4350 more than the .22 Cheetah. Efficient? Not at all. Effective? Certainly, provided the bullet stays intact. Then again, fragmentation at that speed might be preferred, especially with varmint bullets. 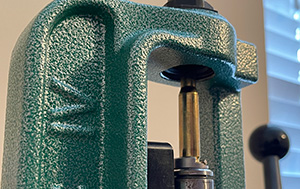 Ironically, SIG Sauer just semi-commercialized – and thereby semi-legitimized – this cartridge within the last couple of years in working toward meeting military contract requirements, and surprisingly, handloaders never really messed with this combination before SIG marketed it. And because of the popularity of the .270 Win., the 6.8X51 mm variant was a losing battle. However, that doesn’t mean a select few didn’t toy with it. Even less data is available on this one from a handloading perspective, which is why none is listed. However, with SIG bringing it to market, that very well may change soon.

The .375 Raptor is where the divergence from handload-only to boutique 308 wildcat cartridges occur. Created to turn AR-10 rifles into a true 400-yard hunting rifle while using common rifles and reloading components, one simply necks up a piece of .308 brass using a tapered expander to set the shoulder angle of the case and expand the case neck, then trim the neck to 1.865 inches. In part one of this series, .338 Federal and .358 Win. cartridges were listed; those cases can also be converted using the same steps. The creator of the cartridge, North American Sportsman, LLC AKA Raptor Shooting Systems, also claims that .300 Savage can be used, though the neck will be slightly shorter.

So what’s performance like? Well, the company states that the cartridge can provide 3,600 ft.-lbs. of muzzle energy, and retain 2,000 ft.-lbs. of energy at 300 yards using Alliant 1200 powder and a 260-grain Nosler AccuBond. Bullet weights run from 175 grains to 350-grains, and are available from Barnes, Nosler, Speer, Sierra, Hornady, LeHigh, Federal, etc. If a company makes a .375-caliber bullet, you can likely use it. Load data is also provided on the website with barrel length listed for performance considerations. One particularly interesting load listed by Raptor Shooting Systems is the 350-grain Sierra MatchKing load. That specific bullet has a BC of .720 when going 1,700 fps, which the company states produce 60 percent more energy at 100 yards than a .300 BLK round at the same distance. Per testimonials on the cartridge’s website, users have taken cape buffalo, grizzly bears and caribou with the .375 Raptor, so it’s plenty capable of completing a wide variety of tasks. Barrels are available from X-Caliber barrels. And because all the cartridge needs is a barrel swap, no other parts need to be ordered, the cartridge will feed just fine through whatever AR-10 magazines you have on hand.

If the .375 Raptor doesn’t entice you, maybe the .45 Raptor will. This 308 wildcat cartridge was actually the first cartridge made by North American Sportsman, LLC, and was built to duplicate a .460 S&W Magnum, but uses no proprietary components like the .460 S&W Mag. does. This means that the cartridge uses .452-caliber pistol bullets, not .458-caliber rifle bullets; it also means .460 S&W Mag. reloading data can be utilized with no problem, meaning .45-cal. pistol bullets from your favorite manufacturer for those loads will fit the bill perfectly; the company once again provides reloading data for the .45 Raptor, too. The company even claims that .460 S&W Mag. dies can be used; one just needs to use a .308 Win shell holder. Ergo, any of the dies from Hornady, RCBS, Redding, Lee, Lyman, and others will work just fine. For those wanting premade brass, Starline produces brass specifically for the .45 Raptor. And when compared to common .45-caliber AR-15 cartridges, like the .450 Bushmaster and .458 SOCOM (as well as the .50 Beowulf), the company offers a comparison chart for various bullets.

For the TL;DR version, the standard 300-grain bullet is faster by about 300-350 fps than the AR-15 cartridges listed, which produces about at least 800 more ft.-lbs. of energy at the muzzle, and maintains 1,500 fps at 200 yards while producing a matching 1,499 figure for ft.-lbs. For this cartridge, two components need to be changed: the barrel, and the magazines need to be modified. Barrels for the cartridge are much easier to come by than the smaller .375 Raptor. X-Caliber again makes the .45 variant, but Shaw, McGowen and Satern also manufacture barrels for this ashtray slinger. For those who don’t want to reload, Buffalo Bore comes in clutch, providing four factory loads. The interesting one out of the bunch? Wait for it… A hard-cast 360-grain gas-checked flat nose bullet chugging along at 1,850 fps. But if you want to hit something the hardest, the 275-grain Barnes XPB load has a muzzle velocity of 2,400 fps, which equates to 3,517 ft.-lbs. of energy at the muzzle from a monolithic hollow point. Enjoy your shoulder surgery.