October 15, 2021 Guns In The News
Home»Commentary»Al Capone’s Personal Guns Up For Auction
Commentary

Al Capone ranks among the most notorious gangsters in history. His name and face are synonymous with the proliferation of gang violence during the Prohibition era, and he’s widely assumed to have been responsible for ordering the 1929 gang hit infamously known as the “St. Valentine’s Day Massacre.” To his family, though, he was known as a father and grandfather affectionately called “Papa.” In 2021, nearly 75 years after his death, the Capone family is auctioning off several of Al Capone’s personal items, including a .45 ACP-chambered Colt 1911 known to be his “favorite.”

“There were numerous attacks on my grandfather,” said Diane Capone, Al Capone’s granddaughter. “In fact, in one of the famous biographies that was written by Mr. Pasley, I believe his name is, years and years ago, he referred to my grandfather as ‘the most shot at man in the country,’ and so Papa many, many times had to be prepared to protect himself. That was his number-one gun for protection, as far as he was concerned, and I know he referred to that as his sweetheart. She was watching out for him.” 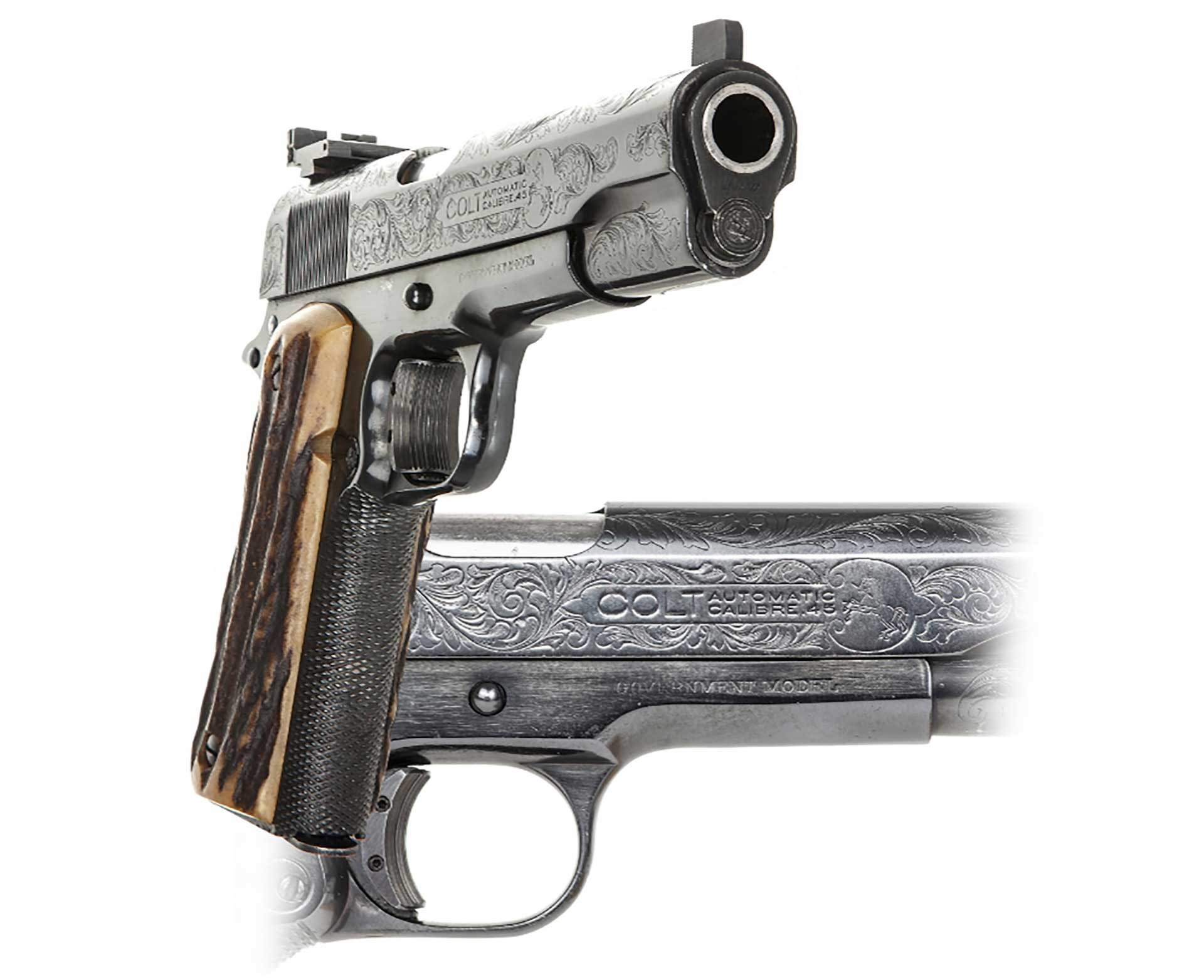 The gun Al Capone considered his “sweetheart” started out life as a Government Model Colt 1911 and was then customized, with many of the customizations likely added at Al’s request. The lanyard loop at the bottom of the mainspring housing was removed, leaving two holes, and the grip itself was modified. The frontstrap has a unique checkering job that extends up just before the beginning of the trigger guard. At the back of the frame, textured stippling extends from the bottom of the frame to the space just below the grip safety. The scant, hard-to-see military sights have been replaced with a set of adjustable target sights at some point in its history.

Additionally, the gun was engraved and refinished with a high-gloss blue, and the polishing needed to prepare the frame for the bluing softened the “GOVERNMENT MODEL” stamping on its right side. The trigger was also modified to include a customized shoe with a radiused face complete with vertical serrations. A final personal touch came in the form of custom stocks made from antlers as a replacement for the checkered wood stocks originally included on Colt’s guns. Otherwise, the pistol includes its original slide-stop lever, single-side thumb safety, short grip-safety spur and magazine-release button.

“When you handle his possessions, you get a sense of who a person is,” said Brian Witherell of Witherell’s Auction House in Sacramento, Calif. “Regardless of how he made his living and what his profession was, you see the human side of him.” 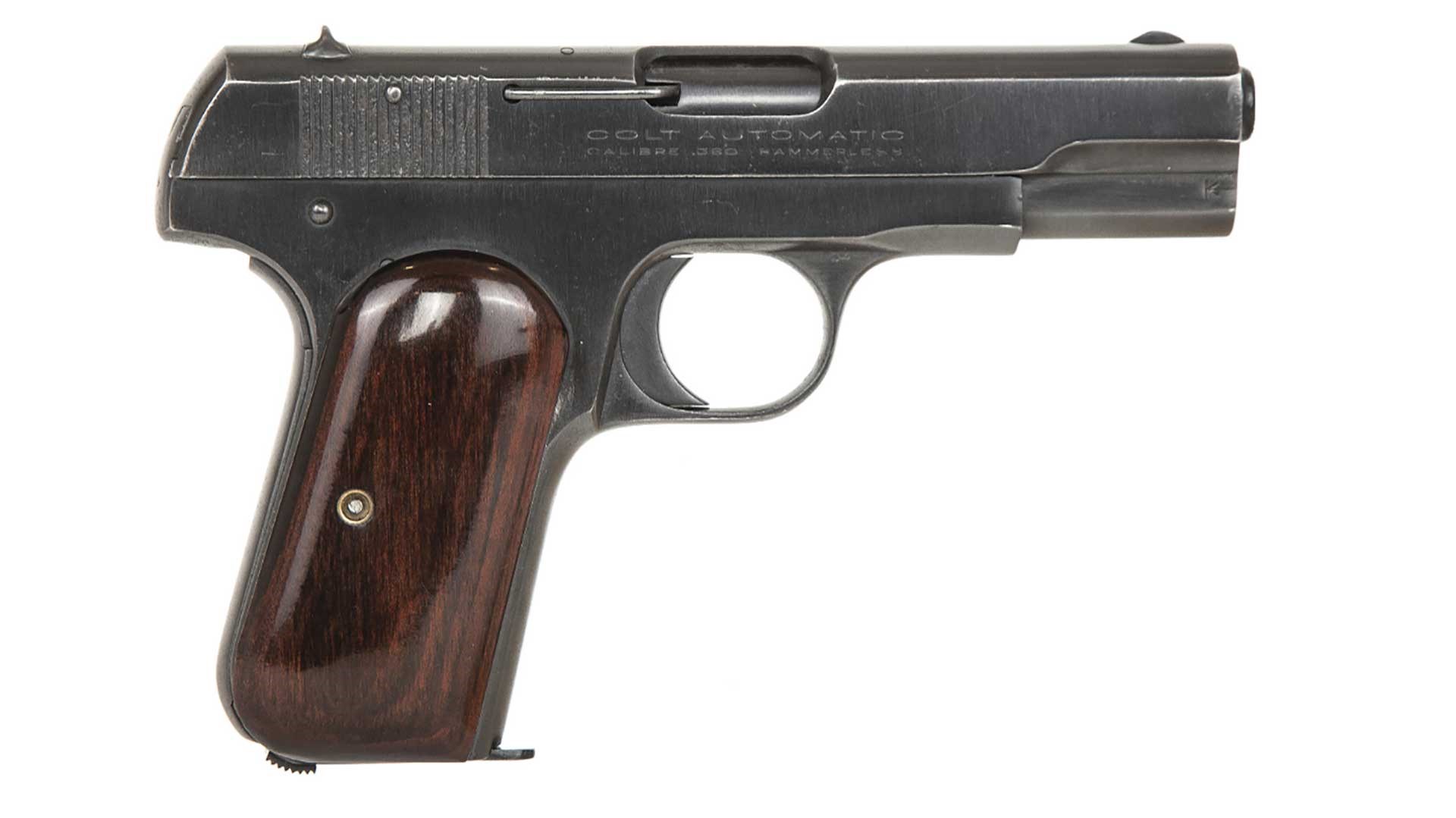 This Colt Model 1908 Pocket Hammerless was owned by Al Capone and was carried by him, according to his granddaughter.

Along with Al Capone’s Colt 1911, the Capone estate also features a number of other firearms. These include Al Capone’s Colt Model 1908 Pocket Hammerless, as well as “Sonny” Capone’s extensive collection of firearms, which includes an M1 Carbine and a number of Colt and Smith & Wesson handguns.

“The smaller gun is a .380 caliber and is hammerless so that it could easily be carried in a suit pocket without need for a holster,” Diane Capone said. “It was also a favorite of Papa’s and was often carried by him.”

Following Al Capone’s death in 1947, his pistols, as well as a number of other significant items from the Capone estate, were passed to Al’s wife, Mae Capone, and then were owned by Albert Francis “Sonny” Capone, Al’s son, before his death in 2004. After his passing, the items were in the possession of Al Capone’s granddaughters, but they’ve decided its time for these unique items, true witnesses to history, to leave the family. 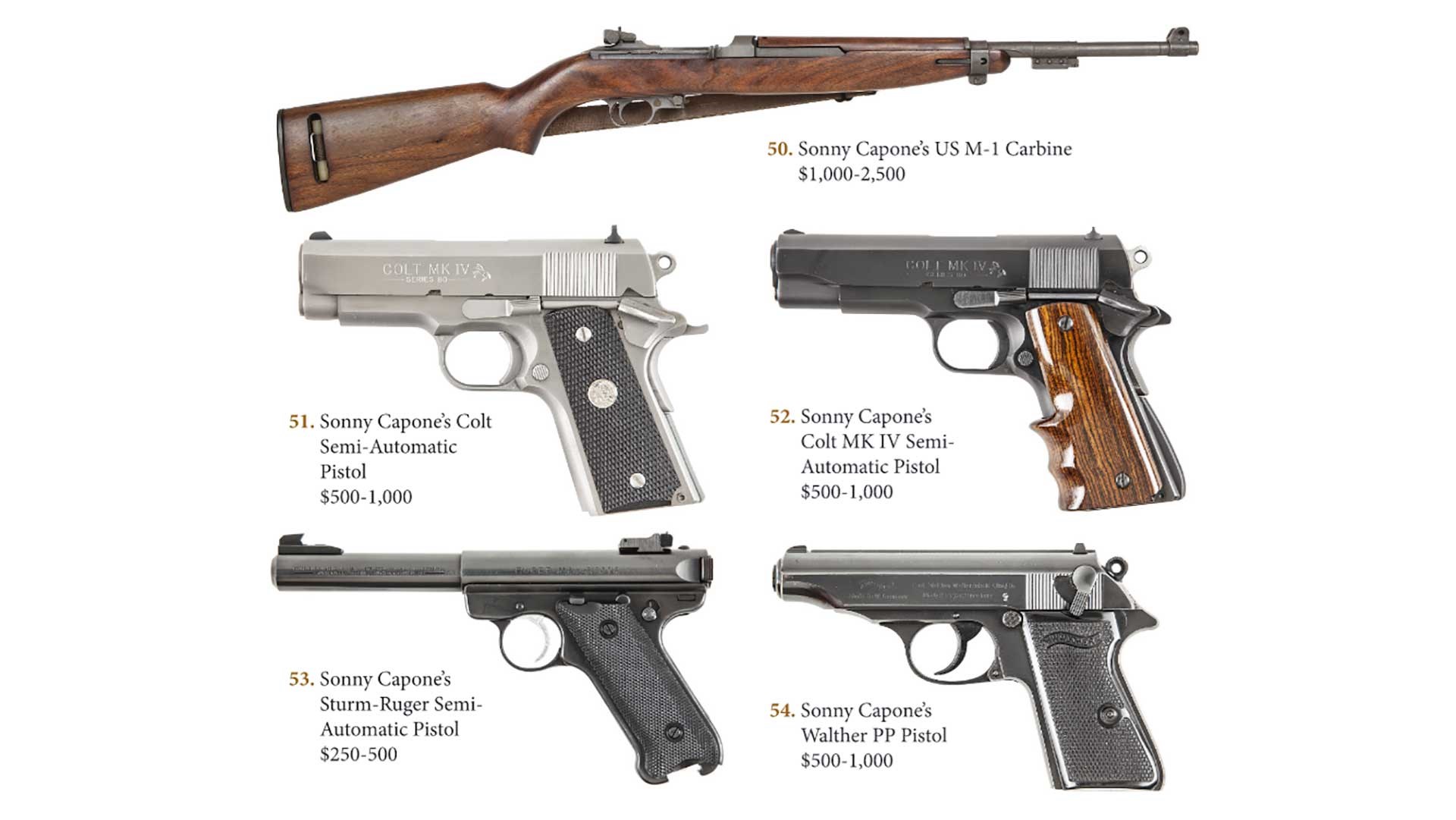 In addition to Al Capone’s personal firearms, several guns owned by Albert Francis “Sonny” Capone are also up for sale.

“My sisters and I are getting older,” Diane Capone said. “We didn’t want these things to be left, and people who wouldn’t know what they were, what the story behind each of them is. We didn’t want to leave them for someone else to have to deal with. That was part of our thinking. The other thing, quite honestly, is, living in northern California, with the fires that we’ve had, I was terrified that, if a fire came through, there would be no way that we could save the memorabilia.”

Breaking Down The Biden-Russian Ammunition Ban With Real Numbers