A major tenant of the Chinese Communist Party is a strict regulation of firearm ownership. They do so under the guise of “protecting human rights” and “reducing gun crimes.” They even criticize the United States for not following their example.

But there’s a connection between CCP antigun propaganda and efforts in the United States and it doesn’t take “six degrees of separation” to see it. The line runs fairly neatly from the CCP, to failed Democratic presidential candidate and billionaire antigun crusader Michael Bloomberg and through to his gun control news arm, The Trace. New reporting shows just how strong the connection is.

Bloomberg Media’s namesake founder and majority owner, former New York City Mayor Michael Bloomberg, is a fan of gun control and efforts to enact more of it. Restricting the rights of law-abiding Americans was a platform plank during his abysmal 2020 Democratic presidential bid. During his campaign, Bloomberg claimed it was proper that he employed armed private security services while Americans not cut of his cloth had no legitimate need for similar armed protection. After all, among equals, he was a little more equal because he’s an extremely wealthy businessman and former mayor of a major metropolis.

Asked if his life was more important than that of an town hall audience member, Bloomberg didn’t hesitate. “Alright, look… I probably get forty or fifty threats every week…That just happens when you’re the mayor of New York City, or very wealthy, or campaigning for the president of the United States. You’re gonna get lots of threats.”

With beliefs like that, it’s no surprise Bloomberg’s presidential candidacy flamed out. The $1 billion he spent on gun control efforts to buy more congressional seats and state legislative seats to enact more gun control went up in flames too. Plain and simple, Americans do not support more gun control.

The Chinese Communist Party (CCP) pushes antigun propaganda and strict ownership restrictions on their citizens and the CCP’s media arm helps. The party’s messaging is pushed on Americans too, saying China’s the shining example to follow because their gun control “saves lives.” In an editorial printed in the CCP’s state-run media outlet, the Global Times, the paper chastised America for their staunch belief in the Second Amendment.

“Washington has been pointing an accusing finger at other countries over human rights … However, more Americans have been killed by gunfire in the country than American soldiers being killed in all U.S. wars,” the Global Times printed. It added “Gun ownership in China is strictly regulated, which helps reduce gun-related crimes and deaths. The U.S. should learn from China and genuinely protect human rights. The U.S. has no other choice but to adopt gun control. The right of life is the most fundamental (of) human rights. The right to bear arms cannot overpower the individual’s right to live.”

Never mind this is the same Communist Chinese Party founded by Mao Zedong, who is accused of murdering 65 million of his own countrymen. The CCP must count Chinese genocide figures differently.

If the gun control rhetoric sounds similar, it should be no surprise. Top-level Bloomberg media executives have been cozying up to high-level CCP leaders for years.

Breitbart reported on several meetings between Bloomberg officials, including Michael Bloomberg himself, and leaders of the CCP and their State Council Information Office, the media arm of the party. Those meetings even included a 2018 visit by Bloomberg News editor-in-chief John Michlethwait to discuss “strengthening media cooperation between China and the U.S.”

Bloomberg’s antigun efforts include bankrolling the gun control groups Everytown for Gun Safety and Moms Demand Action, which President Joe Biden used to choose his 2020 running mate. Bloomberg launched his own antigun propaganda media arm masked as “an independent, nonpartisan, nonprofit news site.” The Trace launched last year and has already infiltrated major mainstream news outlets through partnerships with USA Today, The New York Times, Slate and The Atlantic – hardly bastions of pro-Second Amendment thought. The Trace regurgitates familiar gun control angles and arguments while “reporting” on firearm-related topics. They recently sent out a leading-questionnaire survey to organizations and companies that do business with firearm companies in order to publish a “name-and-shame” hit piece.

The through-line is crystal clear. The Trace is bankrolled by antigun billionaire Michael Bloomberg and tax records show 70 percent of its funding comes from Bloomberg’s Everytown for Gun Safety. John Feinblatt, who heads Everytown for Gun Safety and previously served as a senior advisor to Bloomberg, is the principal officer listed on tax filings for The Trace. Bloomberg and his media company executives have been closely aligned with the CCP and their efforts to impose strict gun control on their people, all in the name of safety and security. Sound familiar?

Warning: CDC Research “Should be Treated as Unstable and Potentially Unreliable” 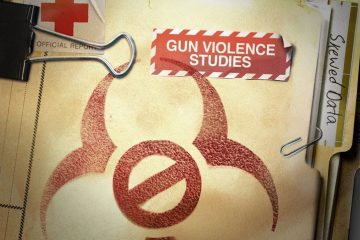