Ammoland – We have been a fan of Bond Arms Derringers for quite a few years.

We originally picked up a Cowboy Derringer on a whim several years ago because of its looks and we were impressed to learn that it offered more than meets the eye, by allowing the shooter to convert to different calibers.

Most Derringers would not be a good candidate for this, particularly the originals or some of the cheaper ones made by other companies, yet Bond Arms is known for building their derringers from high quality stainless steel for a more robust handgun. Their system of interchangeable barrels is a testament to their machining to close tolerances.

You can run just about every handgun caliber from 22 long rifle through 45 Colt and 410 Shotgun shells through their derringers.

What we love about the Bond arms Derringers are their distinctive looks. We can best describe it as a fusion between the Old West and High Tech without being “steampunkish”.

The interchangeable barrel system gives you options and like we saw with Heizer Defenseor the Thompson Center Single Shot pistols and rifles, there is truly a system at work here.

If you want to carry a backup for hiking in rattlesnake country: carry the 45/410 combo. Plinking at cans in the dump sound like fun? Drop in the 22 long rifle conversion barrels. Did you buy a case of 45 GAP during the ammo crunch of 2013 because it was the only thing left in the store and never ponied up for a new Glock? Great, they have a set of barrels for that, too.

If you just want to supplement your CCW pistol or revolver with a two shot Derringer that takes the same ammunition, you can add 9mm, 45 ACP, 357 Magnum and a host of others to your battery.

With a supplied hex key, you simply unscrew the barrel hinge screw, take out the old set of barrels and replace it with a new set.
Depending on barrel length and finish, a spare set of Bond Arms barrels costs anywhere from $130 (2.5”) to $235 (4.5”).

Bond Arms sent us a brace of test pistols as well as a few extra barrels (38 Special/357 Magnum and 45 ACP) to allow us to try different combinations. You may have read our earlier Bond Arms Reviews on Ammoland.com, so here is our impression with the two different frames and these two caliber changes.

The 45 ACP barrel set was very similar to the 9mm Derringer we tried out in size and appearance. Recoil was very similar on both frames and we noticed no discernable difference in the accuracy department. Like the 9mm it lacks extractors, so any fantasies of being “Derringer Dan” with a quick reload after firing 2 rounds in succession can be thrown out the window.

If you are a fan of 45 ACP, this will make a cool little add-on to your Bond Arms battery.

Up next was the 38 Special/ 357 Magnum barrel unit. This was the longer 4.5” version similar to the one we shot on the 45/410 Snake Slayer. The difference being that the caliber choice was much milder.

A bit on the large side for CCW, but it was surprisingly fun and more accurate than we anticipated.

When thinking about an extra barrel to go with our own 45/410 Cowboy Derringer we were thinking 10mm, 44-40, 44 Magnum and probably just about everything but the 38/357 version.

In retrospect, we found this barrel set to be a lot of fun and may be looking into one of our own in the near future.

Derringers tend to be a niche item. People either love them or hate them and just see no practical use for them. Bond Arms’ guns are the top of the line in materials and craftsmanship for these types of unique pistols and the spare barrel sets really give the shooter some unique options to play with.

Mike Searson’s career as a shooter began as a Marine Rifleman at age 17. He has worked in the firearms industry his entire adult life as a Gunsmith, Ballistician, Consultant, Salesman, Author and was first certified to teach firearms safety in 1989.

Mike has written over 2000 articles for a number of magazines, websites and newsletters including Blade, RECOIL, OFF-GRID, Tactical Officer, SWAT, Tactical World, Gun Digest, Examiner.com and the US Concealed Carry Association as well as AmmoLand Shooting Sports News.

Which Bullpup Rifle is Right for You? 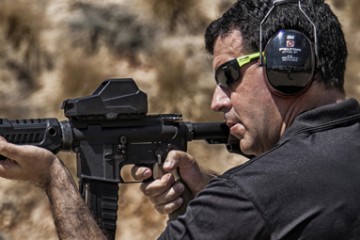