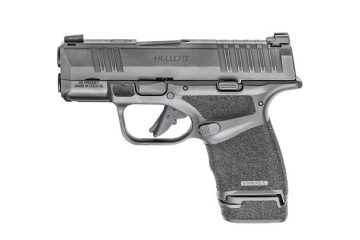 U.S.A. –-(AmmoLand.com)- With the end of lockdown seemingly insight for most parts of the country, it is time to see some of the projects we had all the time in the world to work on. While some first-time buyers were running to gun stores to purchase a handgun or rifle for protection, more seasoned gun owners were accumulating parts to build out their dream rifle or pistol. While I saw a number of things out of stock at one point or another, certain parts like lowers and Brownells BRN-180 uppers were always ready for the consumer during these trying times. With that here is the breakdown of my BRN-180s Pistol build!

If you aren’t familiar with the BRN-180 line, you can read some reviews here at AmmoLand. Brownells has delivered an amazing option for AR-15 owners with this line of complete uppers in various lengths: 10”, 16”, and 18”. Any BRN-180 upper will fit any Mil-spec lower and allows the user a reasonably priced piston upper. The piston upper has some advantages over a Direct Impingement gun, one of the most obvious is that it does not require a buffer system. The lack of a buff allows for a folding pistol brace or stock if you choose a rifle length upper.

The BRN-180 is a modern recreation of the AR-180 that was developed by Eugene Stoner, so in essence, this platform shares quite a bit of history and parts with the AR-15. For the average gun owner, this means that you can take any old pistol lower or rifle lower and throw on the appropriate length upper as you see fit!

For my pistol I decided to use an Aero Precision M4E1 lower, one of my favorites to build with. The Aero lower has a lot of improvements to your standard AR-lower, first among them the built-in trigger guard and the set screw for the bolt catch. These little upgrades make building this lower much easier than a standard lower, and I have always found them reasonably priced with very high-quality machining to match. During the darkest weeks of quarantine, I never saw these lower receivers out of stock on Brownells.

At this point, I had pretty much everything I needed to build a lower except for the brace I wanted, for that I put in a call to my friends at Palmetto State Armory. If you have followed PSA through their journey of building AKs and the AKV you may have noticed their collaboration with SB Tactical to deliver the triangle folding brace to the market. This is by far my favorite brace available currently, largely because triangle folders look cooler than anything else available! With the BRN-180 not requiring a buffer system, this meant the triangle folding brace could be attached via a 1913 picatinny rail.

Brownells does have dedicated BRN-180 lowers but they have been out of stock and on pending pre-order for some time. I checked for a week without finding them before I decided to go the standard AR-15 lower route. If you choose to do as I did the only part you will need is a pic adapter to replace the buffer tube. KNS Precision offers that solution and it is very easy to install on any AR-lower. Make sure you select the flanged version to hold the rear detent pin in place. I would also recommend using a touch of thread locker on the nut that holds the picatinny rail to the buffer adapter.

With the lower built and the pistol brace secured, the last part to consider was an optic. I have pre-ordered the Primary Arms 1x Cyclops Prismatic optic but in the meantime, I wanted to have something to toss on the pistol so that I could hit the range. Primary Arms has a plethora of options to choose from including a prismatic line-up, low variable optics like the one I use for 3 gun, higher magnification for long-range work, and a very good red dot selection. While Primary Arms is working on dropping some brand new options soon they were kind enough to send out their MD-ADS Red Dot. The MD-ADS is an older version but still provides a crisp red dot and a micro footprint for mounting solutions. After a quick range session to sight in I was very happy with its performance so far and did not notice any blinking under recoil.

With the MD-ADS you will have to buy a mounting option as it does not ship with one besides the direct picatinny mount. This is too low for use with AR-style uppers, but the solution is simple enough as there are a number of mounts that fit the micro footprint. For my choice, I looked for a Scalarworks lower 1/3rd but had no luck in finding them in stock anywhere. As a back up I went with the Geissele Super Precision lower 1/3rd micro mount, which worked perfectly with the optic.

The last piece I added to this pistol was an upgraded trigger, mil-spec is fine but I much prefer a single-stage trigger. Palmetto State Armory has recently released their line of triggers and they asked me to take a look at them, it was really good luck and chance that it was here in time for this build! My favorite part about installing the trigger is that it is self-contained and arrives assembled. All you need to do is set it into the receiver, drop in the pins to hold it in place and tighten down on two set screws inside the trigger housing to secure the pins tightly in place. If you are familiar with Timney triggers, this is a very similar setup. The single-stage trigger has a curved face and pulls around 3.5lbs. This is my favorite type of trigger and Palmetto has delivered a winner with the price point. Time will tell how the set screws do at staying secure but so far it has worked without issue.

After a quick range trip to test fit and function, everything with the BRN-180s upper and the assembled pistol lower checked out. Why build a BRN-180 pistol? We will revisit that in full when I get a day on the range, currently I am waiting on the dedicated BRN-180 lower to show up. When it does we will go in-depth on the differences between a standard AR lower build and the dedicated lower. I did have the chance to shoot the pistol at 50 yards to sight in the red dot which only took 10 rounds to get my group and zero.

Duncan is a firm believer in the Second Amendment and that “shall not be infringed”, means exactly that. A life-long firearms enthusiast and a graduate of George Mason University, now competing regularly in 3 gun competitions, Duncan is always looking to improve his shooting skills. Duncan is a regular contributor to AmmoLand and assists in the everyday gun-news publishing as an assistant editor.