U.S.A. –-(AmmoLand.com)- With nearly 640 people having been murdered so far this year in Chicago, and a showdown unfolding between Mayor Lori Lightfoot and Fraternal Order of Police President John Catanzara—who apparently decided to not speak anymore to the press Friday morning, including AmmoLand News—is the Windy City about to descend into anarchy as police officers resist a vaccine notification mandate and possibly be sent home?

Although Catanzara appeared on Fox News Thursday evening and again Friday morning, a receptionist at the FOP told AmmoLand News via telephone he is not speaking any further to the media as the showdown heats up.

Lightfoot and the city filed for an injunction against Catanzara, according to the Chicago Tribune. The newspaper described the legal move as “yet another escalation in the showdown.” Lightfoot, the Tribune recalled, announced two months ago that Chicago city employees would have to be fully vaccinated against the coronavirus by Oct. 15th, 2021.

It’s the same deadline set down for other government workers around the country. Police and firefighters in Seattle, for example, are also facing the same mandate. In Seattle, the police department has lost more than 250 commissioned officers over the past 19 months in the wake of the COVID-19 outbreak and last summer’s violent protests during which members of the city council took positions against the police, and now one candidate for the position of city attorney is facing backlash for social media rants against police in the Jet City.

But in Chicago, Catanzara’s call to officers not to comply with Lightfoot’s vaccination reporting requirement. Those who do not comply face the potential of being sent home, and loss of their paychecks. According to ZeroHedge, Catanzara is predicting half the force could wind up off the job.

The most important question facing the city may not be who wins this brawl between the city and the FOP, but whether Chicago residents will have to increasingly defend themselves amid the city’s spike in violence.

This month alone, according to the popular website HeyJackass.com, as of Friday 23 people had been fatally shot in Chicago so far this month. Another 161 had been wounded by gunfire.

Catanzara released a YouTube video explaining the FOP’s position, and public reaction to his statement has been strongly supportive. One man wrote, “In Poland a labor protest was the spark that took down communism. This is the spark. The airlines have started by not flying. This will reverberate across the land. John your (sic) doing the right things. Heroes in blue, just know you are in our prayers and you are respected by the citizens of Chicago and the United States. Solidarity.” 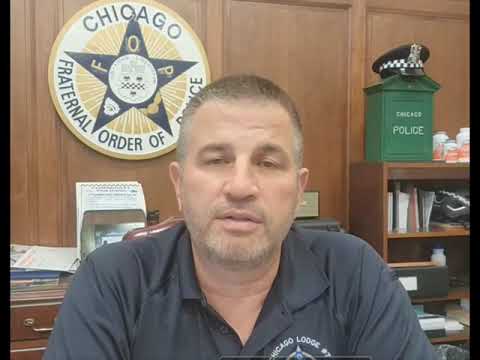 The Chicago Sun-Times reported that Catanzara went on a foul-mouthed tirade Wednesday, declaring “We’re in America, G-d damn it. We don’t want to be forced to do anything. Period. This ain’t Nazi f—ing Germany…”

His remarks reportedly brought condemnation from the Anti-Defamation League, the Sun-Times reported. That organization contended the comparison of mandatory vaccinations to what occurred in Nazi Germany 80 years ago is “deeply offensive.”

But this isn’t about what happened in Germany. It is about what could happen in Chicago if police are sent home for non-compliance with the vaccine mandate.

Will the city’s criminal element—which already has shown no sign of letting up on the slaughter—step up its mayhem? And will law-abiding, albeit embattled, Chicago citizens fight back?

More than 11 years ago, the city’s decades-old handgun ban was nullified when the U.S. Supreme Court on a 5-4 vote issued a gun rights victory ruling in the case of McDonald v. City of Chicago. That case was brought by the Second Amendment Foundation, which subsequently sued the city over its restrictive handgun policies.

At least nowadays, honest citizens can own handguns for personal protection in the city.

As the city took Catanzara to court, Lightfoot issued a statement, quoted by WLS News:

“As Chicago’s Mayor, I cannot and will not stand idly by while the rhetoric of conspiracy theorists threatens the health and safety of Chicago’s residents and first responders. President Catanzara has time and again deliberately misled our police officers by lying about the requirements of the policy and falsely claiming that there will be no repercussions if officers are insubordinate and refuse to follow a City and Department directive or order. Notably Catanzara has urged officers to reject the City’s vaccine policy and has repeatedly instructed police officers to refuse to comply with the City’s lawful directive which requires all City employees to report their COVID 19 vaccination status by October 15. By doing so, and by predicting that 50% or more officers will violate their oaths and not report for duty, Catanzara is encouraging an unlawful strike and work stoppage which carries the potential to undermine public safety and expose our residents to irreparable harm, particularly during an ongoing pandemic.”

As noted by WLS, the FOP immediately fired back on Twitter:

“President John Catanzara has never engaged in, supported, or encouraged a work stoppage. @LoriLightfoot is the only one who has said she will send our dedicated Officers home without pay if they choose to reject her unlawful orders. Hold the line, CPD, like you always do.”