During most of my shooting life, I’ve trusted Colt handguns, and the very few AR-15 rifles I’ve deployed have been Colt AR-15s. From the HBAR to the SOCOM carbine, these rifles have given excellent service.

I’ve watched the AR-15 platform as it’s been modified and improved for tactical use. Improvements included a removable carrying handle, flattop receiver and first a quadrail, then Keymod rail handguards. These improvements, along with modern adjustable tactical stocks, have improved the efficiency of what was, after all, originally designed as a rifle for close-quarters combat. I’ve also seen the average AR-15 rifle exhibit improvements in accuracy.

The Colt Expanse is one of the best things to come from the company in some time. It’s an affordable, Colt-quality AR-15.

The rifles have also become expensive in quality examples. A few years ago, it became common to see inexpensive rifles offered in the AR-15 platform. Fit and finish isn’t the best, sometimes the stocks have a lot of play, and overall the rifles are not as satisfactory as the better products. Colt remains the AR-15 rifle by which all others are judged.

There seemed to be a race to the bottom in price and cutting corners. Despite the corners cut, cheap rifles sold and sold well. Another phenomenon I find more interesting is the availability of good quality rifles at a fair price. CORE15 offers its M4 Scout at a fair price, and the rifle is both tight and good. It is supplied without sights. Smith & Wesson introduced an inexpensive version of its popular Military & Police AR-15 rifle. Smith & Wesson deleted the dustcover and forward assist from the M&P Sport as a cost-cutting measure.

Colt’s rifles stood at the top of the heap on quality, and the cheaper rifles stood on cheap. But with the CORE rifles and the Smith & Wesson, there were good-quality rifles selling for considerably less than any Colt. These rifles offered a good template for later customization and accessorizing or were just fine for use as issued. Colt responded with the Colt M4 Expanse. The Expanse is delivered without sights, forward assist or dustcover. Unlike the Smith & Wesson M&P, however, the Colt may be retrofitted with a dustcover and forward assist if desired. The forward assist may be added at a later date if desired.

My first impression is positive. The rifle’s fit and finish was good, the build quality was excellent, and the carrier keys were properly staked. The bore is chrome lined. The safety, magazine release and trigger action are crisp and positive in operation. Attention to detail is evident in the rifle. Trigger compression was 6½ pounds (the norm for production AR-15 rifles). The trigger breaks clean without creep or backlash. It isn’t the lightest trigger, but it’s reliable and will be familiar to many soldiers and Marines who wish to own a good-quality AR like the one they carried in service.

There is no play in the controls, and the rifle feels like any other Colt. The 16.1-inch carbine barrel features a fast 1:7-inch twist. This means the rifle will stabilize the heavier class of bullets including the 77-grain loads. Since the rifle came without sights, the next step was to acquire a proper set of optics. There is nothing wrong with iron or red dot sights, but I was interested in fitting a versatile all-around scope to explore the accuracy potential of the rifle. I chose the Truglo Tactical Illuminated riflescope.

Truglo designed this scope to offer a combination of clarity, precision and speed. The scope is designed to offer a bridge between the speed of a red dot and the precision of riflescope. As such, there are inherent compromises, but for use at 25 to 125 yards it works well. The tube is 30mm rather than 1-inch. This makes for increased brightness and also a larger range of adjustment. The bolt-carrier keys are properly staked in the Expanse, right, just the same as the Colt SOCOM, left.

The scope is offered in 1-4x24mm and 1-6x24mm. Either will do a good job. Consider your own needs, and the 1-6X may be your best bet. For my use, 1×4 power is ideal. The mix of clarity and contrast is good. I find this scope to be one of the fastest to a rapid hit that I have used. The scope has a wide field of view that, for some, invites shooting with both eyes open.

If you are young and can adapt, this is the way to go with red dot scopes and this scope as well when set at 1X. Sometimes you need 4X, and the 6X scope allows rapid zooming by virtue of an innovative lever incorporated into the design. The scope is supplied with a monolithic one-piece scope mount. This scope has pre-calibrated adjustments turrets for ranges up to 400 yards. The Truglo scope gives you a lot for the money.

Initial firing was accomplished when sighting in the rifle with the Truglo scope. I carefully lubricated the carrier assembly and did not expect any malfunctions, and I did not experience any. For initial range work, I used Hornady #80274 55-grain JHP. This is a steel-case load offered in a 50-round box for economy. The rifle is supplied with a single magazine. Additional magazines were also used. The rifle was sighted in using the box method in which I use the 200-yard zero, with the rifle dead on for combat ranges, a bit high at 100 yards and dead on again at 200 yards. I left the rifle on the 1X setting and proceeded to address a number of modern tactical targets from Tactical Target Systems. These targets make training interesting and serve a real purpose in tactical training.

The scope proved to be true to its claim. At moderate ranges—25 to 50 yards—the rifle and scope combination proved fast and effective. The trigger is controllable, and the rifle is well balanced. When using the preferred hand-forward method of firing the rifle, control is excellent. If you are used to the Keymod rail, you may touch the gas block of the standard M4 rifle. This isn’t something you wish to do.

I fired 150 rounds in initial range testing. It doesn’t take long, but I do not like to overheat a barrel, so there was an interval between firing strings. I cleaned the barrel and chamber and addressed 100-yard accuracy. I used three loads, the Hornady #8026 60-grain Interlock and #80268 75-grain TAP and the aforementioned steel-case load. I fired three three-shot groups at a long 100 yards with each cartridge, using the 4X setting. Results were good.

The forward assist may be added at a later date if desired.

The steel-case load averaged 1.6 inches, excellent for an economical training load, while the 60-grain JSP averaged 1.25 inches. Interestingly, this load averages .9-inch in the much more expensive Colt SOCOM, which also has high-end optics. The TAP load is a highly developed load intended for critical use. This load averaged 1.3 inches with a single 1-inch group. Clearly, the Colt Expanse is accurate enough for any foreseeable chore.

The Colt has proven reliable and accurate enough for any chore short of long-range varmint control. America’s first black rifle is still at the top of the heap.

Colt has taken a few bumps and bruises, but still makes one of the finest ARs on the market. Share your Colt story in the comment section. 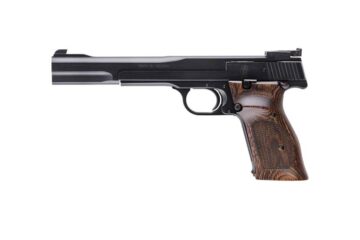