U.S.A. –-(Ammoland.com)- Fox News is known as a conservative news source, and most conservatives back gun rights. It was a little shocking to me when I saw their website running an article by Hollie McKay on guns that was using scare tactics to push for new laws.

The article starts by highlighting that only one out of ten criminals buy their firearms legally. It then tries to separate criminals from “mass shooters.” According to the article, mass shooters mostly use legally purchased guns.

What the article doesn’t tell you is that the chances of being shot in a mass shooting are incredibly low. You have a higher chance of dying by getting wrapped up in your bed sheets at night than to be killed in a mass shooting. Yet, the “epidemic of mass shootings” gets rolled out in a so-called friendly publication.

RELATED:  Setting Brushfires 06-10-2019: What Happened When The British Came To Take Our Founders’ Arms?

The article talks about the rise of people using 80% lower receivers to make their homemade firearms. It throws around the term “ghost gun” to try to scare the reader. It talks about these perfectly legal firearms as a “prominent cause for concern in recent years,” even though criminals hardly ever use these types of guns in crimes.

I spoke to the Senior Vice President of Gun Owners of America, Erich Pratt, about the topic of homemade firearms, and he agreed with my assessment of the non-issue.

“The ability to make one’s own firearm is protected by the Constitution — and has been legal on this continent going all the way back to Jamestown,” Pratt told me. “While the anti-gun Left may try to demonize this process by referring to these items as ‘ghost guns,’ the fact remains that thousands of honest gun owners today are making their own legal guns — and 99% of these guns will never be used in a crime.”

The Armory was an attempt to sell guns through the Dark Web by Ross Albrecht. Albrecht went by the online moniker of the “Dread Pirate Roberts.” He was the owner of the online drug marketplace, “The Silk Road.”

Albrecht dumped millions of dollars into the Armory to get it up on the Dark Web before is his arrest. He eventually shut down the site because the intercept rate of the firearms, when they were shipped, caused the site to lose money. There is no reason to believe that anyone has figured out the shipping problem.

The article ends with a quote about the need for more laws and the need for universal background checks. With friendly publications like these who needs the anti-gun media.

John is a NRA instructor and a constitutional activist. He is the former CEO of Veritas Firearms, LLC and is the co-host of The Patriot News Podcast which can be found at www.blogtalkradio.com/patriotnews. John has written extensively on the patriot movement including 3%’ers, Oath Keepers, and Militias. In addition to the Patriot movement, John has written about firearms, interviewed people of all walks of life, and on the Constitution. John lives in Northern Virginia with his wife and sons and is currently working on a book on leftist deplatforming methods and can be followed on Twitter at @crumpyss, on Facebook at realjohncrump, or at www.crumpy.com.

Below the Radar: Protecting Communities and Preserving the Second Amendment Act

Gun Sales Are Up 309%: The Voice that Tyrants & Mainstream Media Don’t Want You To Hear!

Gun Confiscation & the Silencing of Opposition 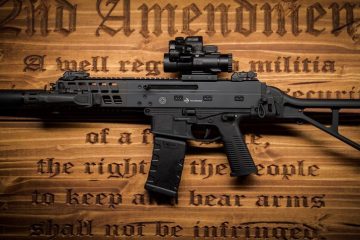