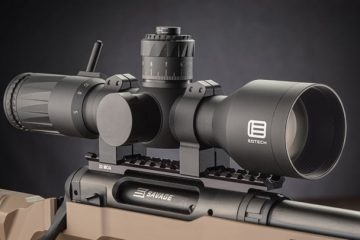 Learning How to Shoot Takes Practice and Patience

U.S.A. -(AmmoLand.com)- As part of an ongoing effort to give customers more options when choosing to “Hunt With A Henry,” Henry Repeating Arms is pleased to announce four new models that fit the needs of modern hunters, whether in pursuit of small game or large, feather or fur.

The Lever Action Magnum Express .22 Magnum (H001ME) is a purpose-built small game and varmint hunting rifle with a feature set catered towards use with magnified optics. This rifle is void of any iron sights, so the receiver cover is topped with a Picatinny scope base to accept a wide variety of scope rings. Because a scope sits up higher on the rifle than barrel-mounted iron sights, the buttstock is shaped with a Monte Carlo style for a higher cheek weld and more natural shooting position. A rubber recoil pad is added for additional stability. The Lever Action Magnum Express .22 Magnum has a manufacturer’s suggested retail price of $622.

By popular demand, the Lever Action X Model .30-30 (H010GAWP) is the newest entry in Henry’s X Model line of modern, feature-packed lever actions first introduced in January 2020. Most notably, this new model features full synthetic furniture with integrated sling swivel studs, Picatinny and M-Lok accessory slots, and an industry-standard 5/8×24 threaded barrel to accept a suppressor or other muzzle device. The rifle is topped with fiber optic sights, and the blued steel receiver is drilled and tapped for optional scope use. The Lever Action X Model .30-30 has a manufacturer’s suggested retail price of $1,019.

Borrowing elements from Jeff Cooper’s scout rifle concept, the All-Weather Picatinny Rail .45-70 Side Gate is topped with an extended section of Picatinny rail for mounting a scope further forward on the barrel to free up more peripheral vision and make for quicker target acquisition. The rail also includes a peep sight that is fully adjustable for windage and elevation. Henry’s All-Weather finish consists of a satin hard chrome plating on most metal surfaces and specially treated hardwood stocks for temperature and moisture resilience. The All-Weather Picatinny Rail .45-70 Side Gate rifle has a manufacturer’s suggested retail price of $1,221.

For the dedicated turkey hunter, Henry is now offering the 12-gauge Single Shot Turkey Camo Shotgun(H015T-12) fully decked out in Mossy Oak Obsession camouflage. In addition to the full-coverage camouflage, this shotgun comes with a removable turkey choke to extend the effective range, fiber optic sights, and a drilled and tapped barrel for optional optics mounting. To help mitigate some of the recoil associated with firing 3 ½” 12-gauge shells from a lightweight single-shot platform, the pistol gripped buttstock is capped with a soft rubber recoil pad. The Single Shot Turkey Camo 12 Gauge Shotgun has a manufacturer’s suggested retail price of $687.

Henry Repeating Arms is one of the leading rifle and shotgun manufacturers in the United States and a world leader in the lever-action category. The company motto is “Made in America, or not made at all” and its firearms come with a lifetime guarantee backed by award-winning customer service. The company is also known for its charitable endeavors under its Guns For Great Causes program, which focuses on sick children, both individual cases and children’s hospitals, veteran and wounded veteran organizations, Second Amendment, and wildlife conservation organizations.

The company currently employs 535 people and has 250,000 square feet of manufacturing space in its Rice Lake, Wisconsin, and Bayonne, New Jersey facilities. The company is named in honor of Benjamin Tyler Henry who invented and patented the Henry rifle in 1860 – the first repeating rifle, the lever-action rifle, which is America’s unique contribution to international firearms design and is one of the most legendary, respected, and sought after rifles in the history of firearms. Visit Henry Repeating Arms online at www.HenryUSA.com, on Facebook at www.Facebook.com/HenryRepeating, and on Instagram @Henry_Rifles.