Answering the calls from American fans of the iconic and highly regarded G36 platform, Heckler & Koch (H&K) re-introduced its SL8 semi-automatic rifle to the U.S. market in 2021 after a 13-year hiatus. Designated the SL8-6, this new variant is the latest version of the SL8-1 that was first imported in 1998, discontinued in 2004, re-imported in 2006 and discontinued again in 2008. The “-6” variant is distinguished from its antecedent by a black stock, a ventilated handguard and a shorter, higher receiver rail that ships without sights, whereas the SL8-1, in contrast, has a light gray stock, a full-length receiver rail and adjustable aperture sights.

The G36 was designed in the mid-1990s and accepted by Germany’s defense forces in 1997 to replace the aging 7.62 NATO-chambered G3 battle rifle. Though it never gained a significant footprint in the U.S. law-enforcement market where the AR-15/M16 dominate, the G36 is used by government agencies in more than 40 countries. Despite its far-flung presence, however, it is only made by H&K in Germany and licensees in Spain and Saudi Arabia.

The G36 is made in standard, compact and kurz (or short) configurations with a few subvariants based mainly on the type of sights included. A belt-fed version was also made. The G36’s barreled action was also incorporated into the XM8 series of selective-fire rifles that the U.S. Army evaluated in 2003-2005 as a replacement for the M16 series rifles and ultimately dropped from consideration.

Military small arms have a life cycle dependent on experience forged through the crucible of war, and the G36 was no exception after reports surfaced in 2012 during fighting in Afghanistan that its accuracy significantly degraded when the rifle was heated from sustained firing or environmental conditions. This prompted a search for a new rifle in 2015 that remains ongoing. 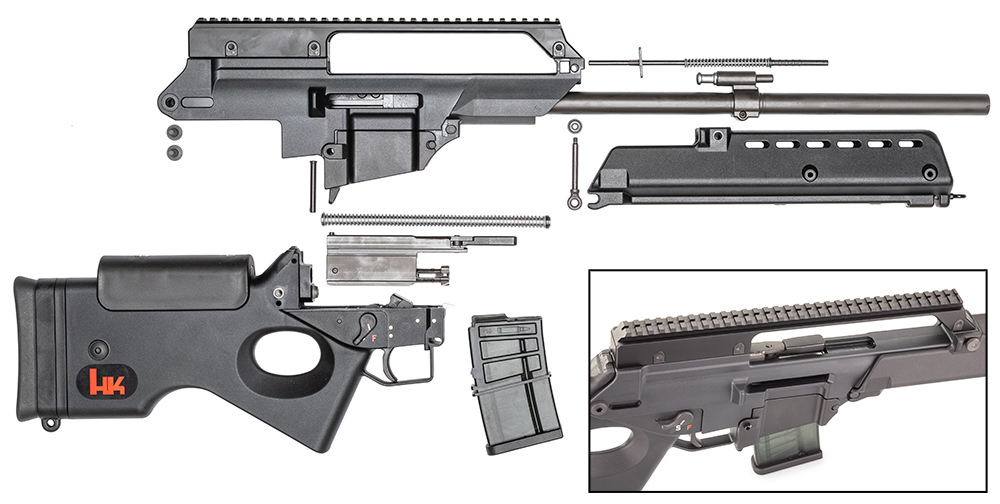 The SL8-6 employs a non-adjustable, short-stroke gas system to cycle the action and has a rotating bolt not unlike that used by the AR platform. Sights can be mounted to the rifle via a 13″-long section of Picatinny rail atop its receiver.

Though the SL8-6 is derived from the selective-fire G36, it’s barely recognizable as such, given the extensive alterations made to the design to remove any hint of its tactical pedigree. This was needed to make it legal for importation into the United States under 1989 and 1998 regulatory re-interpretations of the “sporting purposes” provision of the 1968 Gun Control Act. Besides semi-automatic function, the most salient differences are a receiver that only accepts a single-column magazine—of which a 10-round version is included—a fixed thumbhole stock and a barrel with an unthreaded muzzle. Even with these modifications, which some shooters may find to be disappointing, the SL8-6 is still an interesting rifle, and it’s the closest thing one can get to an H&K-made semi-automatic G36 short of pricey aftermarket custom-shop modifications.

The SL8-6 is gas-piston-operated, chambered in .223 Rem., and feeds from a detachable 10-round magazine. It has an overall length of 38.6″, weighs 9 lbs., 6 ozs., and has a 20.8″ medium-heavy-profile barrel. The rifle makes extensive use of polymer in its construction, including in some non-traditional areas, such as the receiver, hammer, disconnector and trigger. The magazine well, controls, handguard and buttstock assembly are also polymer. Molded-in steel inserts are used in those areas that require strength and wear-resistance, including the trunnion to which the barrel is mounted, the two receiver rails on which the bolt carrier rides and the face of the hammer where it contacts the firing pin. 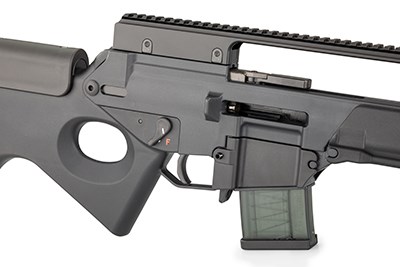 Fieldstripping the rifle starts with removing the buttstock assembly after detaching two hex-head screws and a push pin that attach it to the receiver. This allows the bolt-carrier group and recoil spring to be withdrawn from the rear of the receiver. The bolt carrier can be disassembled further in a manner similar to that for the AR-15’s carrier.

The gas system under the handguard can be accessed independently by unscrewing a crossbolt by hand, aided by the tip of a .223 Rem. cartridge, then pulling the handguard forward. Curiously, both the receiver and buttstock assembly are serialized, but there are no markings on the receiver’s right-side steel insert typically used for the proofmark date code. The receiver on our sample is marked “SL8-1,” but H&K has since secured ATF approval to change this designation to “SL8-6.”

The SL8’s barrel is made from cold-hammer-forged, phosphate-finished carbon steel with a chrome-plated bore and chamber. It tapers from a diameter of 0.84″ ahead of the chamber to 0.79″ at the muzzle, or just thicker than an AR-15 HBAR barrel that measures about 0.72″. The muzzle has a recessed target crown to protect it from damage that could diminish its accuracy. The chamber is made to H&K’s own specifications that allow the use of both .223 Rem. and 5.56 NATO cartridges, although the dimensions do not quite match the similar .223 Wylde chamber that also accepts both cartridges. 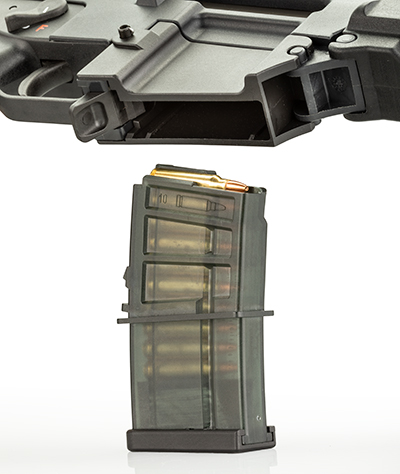 Unlike its military predecessor, the G36, H&K’s SL8 feeds from a 10-round, single-stack, detachable box magazine.

The non-adjustable gas system is a “short-stroke” design so named because the gas piston moves rearward less than the length of the cartridge and is not attached to the bolt carrier as with long-stroke designs like the AK-47. The gas piston is stainless steel, and the gas block is pinned to the barrel 11.5″ ahead of the rear of the barrel extension, making it comparable to a rifle-length AR-15 gas system.

The bolt looks and functions similar to the AR-15’s, with locking lugs that rotate to engage corresponding recesses inside the barrel extension. It also shares a similar extractor and spring-loaded, plunger-type ejector situated in its face. However, the SL8-6’s bolt has six lugs instead of seven, and one lug is altered to prevent feeding from a double-column magazine. Also, because it is piston-driven, the H&K bolt lacks the gas rings used on direct-impingement AR-15 bolts.

As an interesting aside, H&K did not design a firing pin arrest into the bolt carrier as it did with its AR-15-pattern rifle, the MR556, nor did it include a firing pin spring that would keep the firing pin from contacting the primer during counter recoil. Instead, company engineers addressed the very remote chance of a slamfire by using a low-mass firing pin that is noticeably lighter than the AR-15’s. Nonetheless, the manual notes that primers of previously chambered rounds may show small dimples—which they did—as with most AR-15s. 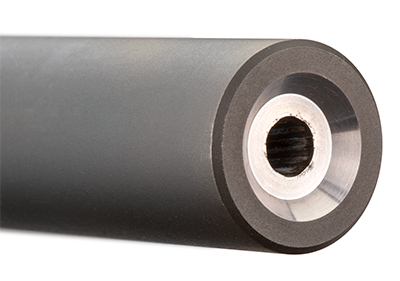 The SL8’s unthreaded barrel tapers from 0.84″ in diameter at the chamber to 0.79″ at its recessed and target-crowned muzzle—slightly thicker than an AR-15 HBAR barrel.

The SL8-6 shares operating controls with the G36 that are unique to these two rifles and their variants. The reciprocating charging handle sits atop the receiver forward of the magazine well. Spring tension keeps the handle pointing forward until grasped, whereupon it can swivel outward to either side of the receiver to afford ambidextrous operation. Pivoting the handle to a 90-degree angle and then pressing it inward locks it to the carrier, allowing the operator to push the bolt carrier forward for those infrequent instances where an out-of-battery stoppage has occurred or a round needs to be stripped from the magazine and chambered slowly with minimal noise.

Bilateral safety levers have a 50-degree throw and, unlike the AR-15, can be engaged regardless of whether the hammer is cocked. The SL8-6 uses a proprietary 10-round, single-column magazine made of translucent polymer that allows inspection of its load status and drops free from the receiver by pushing forward on the release lever located just outside the front of the trigger guard.

Sights can be mounted to a 13″-long aluminum Picatinny-style rail that attaches to the receiver with dovetails and three Phillips-head screws. Unlike the rail used on the SL8-1, this rail appears robust enough to be used as a carry handle without affecting the rifle’s zero. 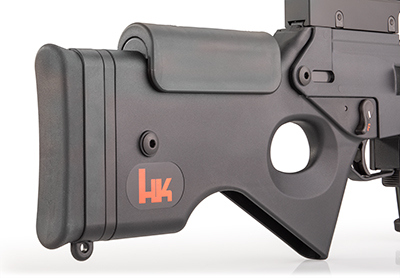 Furniture consists of a molded thumbhole buttstock and handguard. To change the stock’s length of pull, the rubber buttpiece can be adjusted by removing two Allen screws and telescoping it within the stock. From the factory, the length of pull measures 13¼”, but it can be set to between 12 3/4″ and 14¾” in 1/2″ increments by inserting or removing spacers. The comb height can be changed by switching out the cheekpiece that is secured by Phillips-head screws; extra spacers and cheekpieces will soon be available from H&K. The handguard is ventilated on three sides but not on top to prevent barrel heat from creating mirage in the shooter’s line of sight. Its underside at the front has a recess for mounting an H&K bipod. Though the handguard lacks M-Lok or KeyMod slots, rail sections can be attached to threaded inserts located in the front of the sides and bottom. There are three eyelets for sling mounts: one on the buttstock, another on the cross bolt that secures the handguard and a third that protrudes out the front of the handguard.

Although H&K’s manual recommends loads with projectile weights of between 50 and 70 grains, I tested the SL8-6 for accuracy at 100 yards using five match-grade loads with bullets weighing between 55 and 77 grains and for reliability with an additional 55-grain FMJ load. The rifle was equipped with a Leupold Mark IV 8.5-25X 50 mm scope and rested in a Caldwell Precision Turret rest anchored to the bench with sandbags. 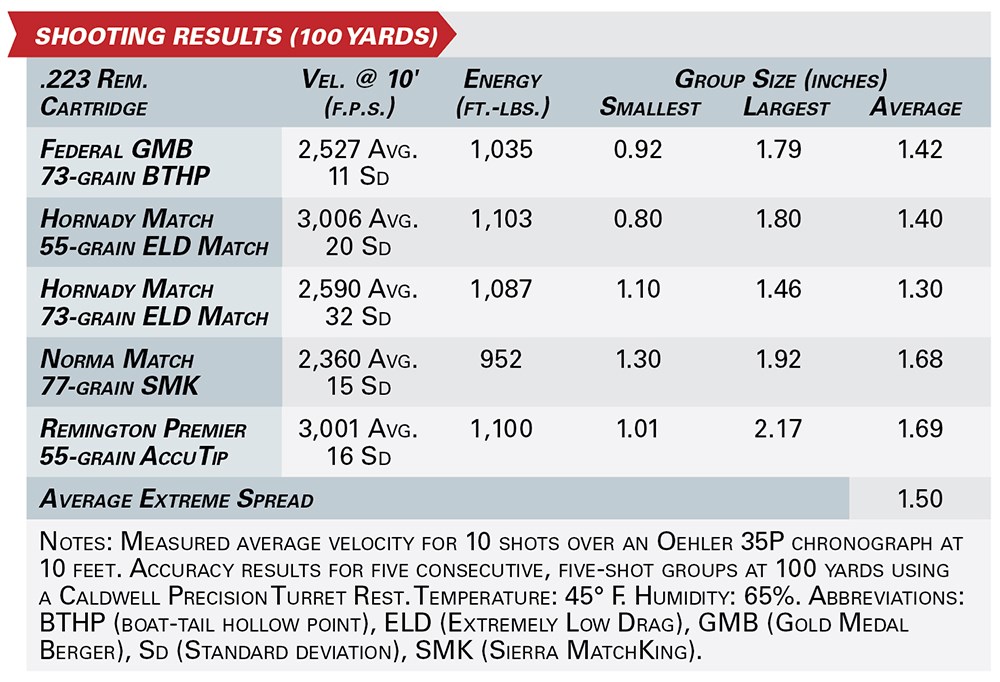 The SL8-6’s average five-shot group at 100 yards across all loads fired was 1.50″. Hornady’s 55-grain ELD Match provided the single best five-shot group measuring just 0.80″. Variability in mean group size was less than 0.50″, with the most and least accurate loads grouping 1.30″ and 1.69″. There were no stoppages during the 200-round session.

Heckler & Koch specs the SL8-6’s trigger-pull weight at 4 lbs., 8 ozs., but the trigger on my sample had a break that measured 5 lbs., 10 ozs., using a Lyman electronic scale, with a smooth stroke. The trigger shoe is wide and feels comfortable but presents a slight degree of creep and a moderate amount of overtravel.

I found that the comb height positioned my sighting eye slightly low for the scope I selected, but different cheekpieces will soon be available to optimize fit. Owing to its barrel weight, the rifle balances forward, making a bipod a favored accessory.

The stock’s thumbhole created less-than-ideal ergonomics because the safety levers can only be manipulated with the trigger finger, not the firing-hand thumb. I did, however, appreciate the levers’ relatively short throw, generous width and ideal amount of tension. Some users that handled the gun said they felt the magazine release should be longer and thus easier to reach, but the universal complaint was that the single-column magazine loads awkwardly and slowly, requiring the user to first depress the follower with the back of the cartridge, then back it in. This technique works reasonably well when loading short, wide cartridges into a pistol magazine, but less so with the long, slim .223 Rem. rounds.

The SL8-6 is not intended to be a tactical rifle, but when equipped with a bipod and a scope, it is well-suited for medium-range plinking and controlling predation of coyote-size varmints where targets are within the effective range of the .223 Rem. cartridge. Although Heckler & Koch did, unfortunately, design the SL8-6 in order to comply with the shifting dictates of a decades-old gun-control law, this rifle is well-made and offers an appealing option to H&K fans and collectors alike who thrive on the unique.