June 30, 2022 Guns In The News
Home»Commentary»How Often Do Armed Citizens Defend Themselves?
Commentary

How Often Do Armed Citizens Defend Themselves?

How often are firearms used defensively in the United States? According to the most-recent study, about 1.6 million times annually. Over a lifetime, about a third of gun owners will use a firearm defensively at least once. This recent data is broadly consistent with decades of social-science research.

The first pollster to ask about defensive gun use (DGU) was the Field Poll in California in 1976. Over the subsequent 18 years, polling companies such as Gallup, Hart and Tarrance, as well as scholars and media, conducted their own surveys of DGU. They reported results as low as 764,000 annually (Tarrance, 1994) and as high as 3.6 million (Los Angeles Times, 1994).

In 1993, Florida State University criminology professor Gary Kleck conducted a survey that was much more methodologically sophisticated than all the above polls. Kleck included safeguards designed to weed out respondents who might misdescribe a DGU story. Kleck and his coauthor Marc Gertz found a midpoint estimate of 2.5 million DGUs annually, with a possible range of 2 to 3 million. Their study is described in the Kleck and Gertz article, “Armed Resistance to Crime: The Prevalence and Nature of Self-Defense with a Gun,” in the Journal of Criminal Law & Criminology (1995), which is available on the web, and is further described in Kleck’s 1997 book Targeting Guns. The book and the article also examine all previous surveys.

The same journal issue that published the Kleck & Gertz study also published a response by Marvin Wolfgang. He had long been the most-influential criminologist in the English-speaking world, and he was past president of the American Society of Criminology. Wolfgang wrote: “I am as strong a gun-control advocate as can be found among the criminologists in this country … . I would eliminate all guns from the civilian population and maybe even from the police. I hate guns … . Nonetheless, the methodological soundness of the current Kleck and Gertz study is clear … . The Kleck and Gertz study impresses me for the caution the authors exercise and the elaborate nuances they examine methodologically. I do not like their conclusions that having a gun can be useful, but I cannot fault their methodology. They have tried earnestly to meet all objections in advance and have done exceedingly well.” 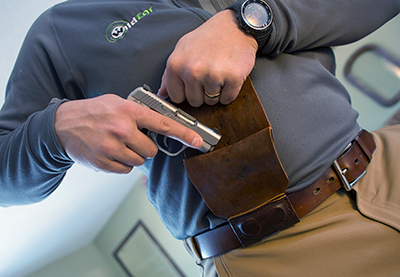 Over a lifetime, about a third of gun owners will use a firearm defensively at least once.

Professors Philip Cook (Duke) and Jens Ludwig (Georgetown) were skeptical of Kleck’s results, and so conducted their own survey for the Police Foundation, a think tank for big-city police chiefs. Their study, published in 1996, estimated that there are 1.46 million DGUs annually in the U.S. However, Cook and Ludwig argued that their study had produced implausibly high numbers, and they adopted the novel (for them) position that it was impossible to accurately measure DGUs.

Meanwhile, the Centers for Disease Control and Prevention (CDC) was also looking into DGUs. A 1994 CDC-funded survey used random-digit-dialing phone calls throughout the United States, resulting in 5,238 interviews. Extrapolating the polling sample to the national population, the researchers estimated that in the previous 12 months, there were approximately 1,896,842 incidents in which a homeowner retrieved a firearm but did not see an intruder. There were an estimated 503,481 incidents in which the armed householder did see the burglar and 497,646 incidents in which the burglar was scared away by the firearm.

Although the CDC at the time gave lots of publicity to CDC studies that supported gun control, the CDC did not call attention to what it found about the DGUs against burglary.

Gun-control proponents simply don’t want the truth to be known about this important topic.

Then, unbeknownst to almost everyone, in the late 1990s, the CDC conducted its own DGU study. The results indicate likely more than a million DGUs annually. The study was never released and was kept secret until decades later, when someone leaked it. The CDC denied that it had suppressed its own research; rather, the CDC claimed that it was still working the data analysis and would release the study when the internal work was finished. As of 2022, that internal review apparently remains a low priority.

Of course, DGUs vary from year to year, depending on the overall crime rate. They would be expected to be higher during the peak crime years of the late 1980s and early 1990s than in subsequent years, where crime levels were (until recently) much lower.

The most-recent data comes from the 2021 National Firearms Survey, conducted under the supervision of Georgetown professor William English. The survey, which is available on SSRN.com, estimated 1.67 million DGUs annually.

People who cannot abide the idea that DGU is common attempt to rebut the above research by pointing to a survey that does not ask about DGU. The National Crime Victimization Survey (NCVS) is conducted twice a year by the U.S. Department of Justice and Census Bureau. The NCVS does not ask respondents directly whether they have used a gun defensively. Instead, some respondents disclose DGUs during the course of being interviewed. Because the NCVS never asks about defensive gun use, it records fewer instances of such use, generally about 100,000 annually.

The National Research Council (NRC) describes itself as “the operating arm of the United States National Academies of Sciences, Engineering, and Medicine,” which are private organizations. A 2013 NRC review of all prior studies on DGU stated: “Almost all national survey estimates indicate that defensive gun uses by victims are at least as common as offensive uses by criminals, with estimates of annual uses ranging from about 500,000 to more than 3 million, in the context of about 300,000 violent crimes involving firearms in 2008.”

Some anti-gun advocates contend that even the NCVS estimate is far too high, and argue that annual DGUs are no more than 3,500 per year, and probably much less. Gun-control proponents simply don’t want the truth to be known about this important topic.

The “New Normal” in Firearms Ownership

The Pro-Gun Actors Who are Anti-Gun Advocates - EXTREMELY Hypocritical! (Video)

How Often Do Armed Citizens Defend Themselves?

The Truth About Gun Control, the Dick Act of 1902, Bills of Attainder & Ex Post Facto Laws