U.S.A. –-(AmmoLand.com)-– The Old School Gun School is a long-established firearms school run by JB Herren, located in Chehalis, Washington. Its origins date to 1972. The school has been very successful.

One of its more successful ventures is a series of conferences on Lethal Force Gun Laws. The first of these conferences was held in 2015, in Washington State. The conference features some of the foremost experts on the subject. JB Herren says it is the most expensive law conference on the planet. The 2021 general admission price was listed at $3,995. The price included all meals and hotel rooms as a package deal.

The 2020 conference was rescheduled for the spring of 2021, in Boise, Idaho, at the Riverside hotel, because of Covid19 restrictions placed on the state of Washington by the governor.

Several prior conferences featured George Zimmerman, who was able to tell attendees what had happened during his fateful self-defense encounter in Florida. Those conferences were held as planned, without any protests or outside drama, in the state of Washington.

The spring conference in 2021 at the Boise, Idaho Riverside Hotel was held as planned. The hotel management was pleased; another conference was planned for four days in the fall, starting November 5th, 2021.

George Zimmerman was prominently featured in advance of the November conference. He was on the agenda. He had a hotel room registered in his name. George was featured in the advertisements for the event. The hotel management did not ask for or require a list of speakers.

No controversy was expected.

On November 4th, 2021, JB Herren and his team were doing preparations for the conference at the Riverside, in the conference room. Considerable setup is necessary for a conference of this size and prominence. In the afternoon, the Hotel management asked for a meeting.  The Conference was to start the next morning at 8 a.m.

At the meeting in the conference room the conversation went something like this, as told by JB Herren as he remembers it:

Hotel Management:  Gee, Mr. Herren, we’re kind of concerned. We have been getting calls from people, and have you seen social media?

Hotel management: Oh, my goodness. It is all over social media.

JB Herren: Is that right?

Hotel management: Do you have George Zimmerman coming?

JB Herren: Yes we do.

Hotel management: Yes it is. Haven’t you read the media?  We are getting death threats. We pride ourselves here at the hotel, because we are the largest employer of minorities. We know George hates minorities and wants to kill them all, and so therefore, we can’t have a killer here because all of our employees are fearing for their life. If George comes, he will probably kill em all.

JB Herren: They said, their employees were in fear for their life if George Zimmerman were present for the conference. There was considerable discussion about that.

JB argued, we have been scheduled. The contract has been signed.

Hotel management: Didn’t you look him up on the web, Mr. Herren?

JB Herren: I know all about him.

Hotel management: How could you invite a killer like that to our hotel? That is highly disrespectful of you!

JB Herren: OK, listen;  I got a whole  lot of people coming to this conference. They are on jets now. I paid for everything.

Hotel management: But George cannot be part of it. You have to get rid of George.

JB Herren: So, OK, I will get rid of George.JB called George. Told him the bad news. JB had already paid him. JB forfeited thousands of dollars. It was not George’s fault. He told George there would be another time.

JB reported to the Hotel management: I got ahold of George, his speech is canceled, its ok.

At this point, the Hotel management has been joined by one of the Hotel owners.

Hotel management and owner: Mr. Herren, we have been getting more and more threats now. It doesn’t matter if George is coming or not.

You can’t hold that conference here.

And, so since the police department can’t keep the hotel safe, we just can’t have you here. Because, after all the rioters and the looters and the pillages and the plunderers they are all going to be here with their machine guns.

JB Herren: This conversation happened pretty much as I just described.

The Old School Gun School had only hours to find another venue. The Conference was scheduled to begin at 08:00 Friday morning. This was Thursday, late in the afternoon.

Most of the students had already arrived and were in their rooms at the Riverside. They would be able to stay there Thursday and Friday nights; then they would have to move.

Many venues in Boise were happy to host the conference, but none had the available space necessary on the days required.  Fortunately, one venue was able to contact another customer and have them move their setup time by a few hours, allowing the venue to have the most expensive law conference on the planet proceed on time.

A few students and presenters canceled out, turned around, and flew home, to avoid the controversy.

Several police officers volunteered and came to the conference, and they all said: This is ludicrous.

JB Herren had this to say of the students:

“Nobody asked for any compensation back. Not one student said: Well, then, I want some of my money.  No. Everybody hugged us and were grateful that we didn’t cave in. Grateful that it was going ahead. Grateful we were still doing it. And p*ssed off as could be with the Riverside.”

The Riverside Hotel management posted their version of events on a poster at the check-in desk. They posted it on social media: 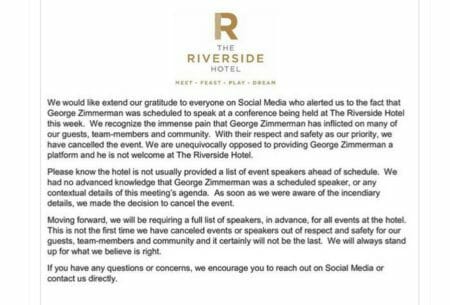 The same image was broadcast on Twitter, by the Redoubt Antifascists, @RedoubtAFA, on November 4th, 2021.

The funds which had been paid to the Riverside Hotel, for services that were not rendered, were eventually refunded. The events for 2022 and 2023, which had already been scheduled, will be held at a different venue.

As far as can be determined, the Best Western hotel chain had nothing to do with the decisions made at the Riverside Hotel.

JB Herren suspects an employee at the hotel found out about George Zimmerman’s scheduled presentation and being ignorant of the facts of the case,going only by the discredited reports of the old media, launched a cancel culture disinformation campaign.

Several people talked of lawsuits against the Riverside Hotel. JB Herren does not know of any that have been filed.

JB Herren’s experience with the people of Idaho is they are polite, respectful, and patriotic. The Lethal Force Gun Laws Conference has been extremely popular and consistently growing. When, at the end of the course, students are asked if they wish to attend the next course, a consistent majority of students have signed up and paid for the next course in advance.

The Lethal Force Gun Laws Conferences are expected to grow and successfully continue into the foreseeable future.

You can sign up for the next Lethal Force Gun Laws Conferences online here.