U.S.A. –-(AmmoLand.com)- On 11 February 2021, there was a bond hearing for Kyle Rittenhouse, conducted on Zoom, over the Internet, by Judge Bruce E. Schroeder.

The hearing was requested by the District Attorney Office, represented by DA Thomas Binger.

Those opposing Kyle Rittenhouse had characterized Kyle as dangerous and a white supremacist. There has not been any evidence presented to support this claim, other than claiming the OK hand sign is used by white supremacists. DA Binger appeared to be echoing those claims.

DA Binger, presumably, had invited one of the men who had attacked Kyle, Gaige Grosskruetz, to the hearing. Also invited (presumably by Binger) was the attorney representing Grosskruetz, Kimberly Motley; the attorney representing the two men who had attacked Kyle and who had been killed,  Joseph Rosenbaum and Anthony Huber; and Huber’s Father, John Huber (in the yellow shirt).

Kyle Rittenhouse has always claimed his use of deadly force during the Kenosha riots was justified self-defense.

Rittenhouse can be seen fleeing the mob before the shooting and being attacked in a coordinated manner by three men, two of which had weapons (a pistol and a skateboard).  It is all documented on video from numerous angles. 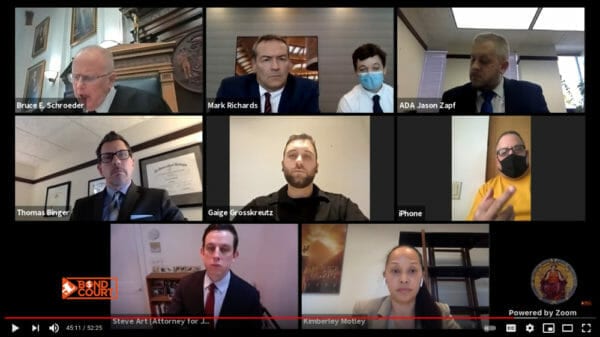 By the end of the hearing, Judge Schroeder had assured those present he was committed to the rule of law, a fair trial, due process, and respect for Constitutional rights. He stated he would treat everyone in his courthouse without regard to skin color.

Judge Schroeder reiterated his long-standing policy that the word “victim” would not be used in his courtroom because calling some parties involved “victims” prejudges the case.

In ordinary circumstances, this would be applauded and hoped for.

One of the functions of a trial is to determine who was the victim, especially in a self-defense case, where the person being tried claims they were attacked and defended themselves. The people Rittenhouse shot were white.

These are not ordinary circumstances.

Kyle Rittenhouse did not simply defend himself against multiple attackers, two of whom were violent felons (Rosenbaum and Huber). The people Rittenhouse shot were considered to be allies of the violent left.

The philosophy of the violent left holds the system itself as illegitimate, therefore, the rule of law is illegitimate.

The attitude is seen in John Huber’s response.  Huber, without evidence, read a prepared statement smearing Rittenhouse and claiming the people supporting Rittenhouse were “hate groups” and “militia”. Huber holds the laws to be illegitimate:

“Whatever the statutes are, they must be wrong.”

Huber holds the statutes must be wrong because they do not give him the result he wants.

Judge Schroeder was gentle with him, probably because he is expected to be a grieving father.

Judge Schroeder carefully explained the law, bail bond procedure, and the facts to the DA. Then he made his ruling.

John Huber’s response was the middle finger salute. A less disciplined and gentle judge than Judge Schroeder might have taken offense, if not for himself, then for the dignity of the court.

It seems unlikely such conduct will be allowed during the trial.

Those on the left have repeatedly shown they do not believe in the rule of law or of due process. They believe the system needs to be destroyed so they can replace it. They desire the rule of man.

GOV. CUOMO SPIKED N.Y. GUN RIGHTS. CRIME IS SOARING AND HE ANSWERS, ‘YOU FIGURE IT OUT!’