On April 8th, President Biden announced the nomination of David Chipman to lead the “AFT”—an obvious blunder given that he was talking about the Bureau of Alcohol, Tobacco, Firearms, and Explosives (or ATF).

David Chipman poses a grave threat to the Second Amendment if given the reigns at ATF—an agency already predisposed to infringe on your right to keep and bear arms.

GOA needs you to contact your Senators—especially weak Republicans and so-called moderate Democrats—to make sure they know ALL the scandals surrounding this unconscionable nominee.

The Senate is expected to start hearings on the Chipman nomination as early as Wednesday, May 26.

So read up, get the facts, and call your Senate office to give them the full scoop!

David Chipman began his career regulating gun rights with the ATF. He left ATF to lobby for Everytown for Gun Safety and later the Giffords Law Center. United States Senate Lobbying Disclosure Act (LDA) Reports indicate that David Chipman made hundreds of thousands of dollars a year from 2017 to 2020 lobbying against the constitutionally-protected right to keep and bear arms. He also made over a million dollars lobbying for gun control in just six months between 2012 and 2013. 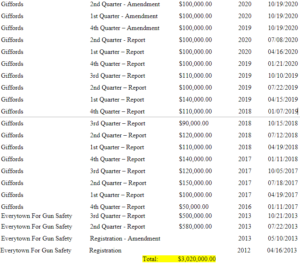 Over the years, lobbyist David Chipman worked against the constitutionally-protected rights of the people by supporting a host of gun control proposals and opposing bills to restore the Second Amendment from infringements. Please note that this list is by no means comprehensive. It is merely provided to provide insight into the mindset of anti-constitutional gun prohibitionist and gun control lobbyist. 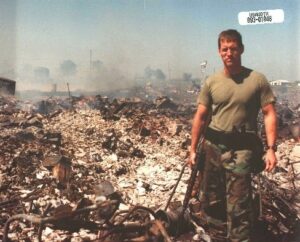 As noted earlier, Chipman began his career by spending 25 years enforcing gun control at the ATF. Chipman’s first postings at the Washington and Houston ATF Field Divisions led to his involvement in the 51-day federal siege on Mount Carmel, a compound and church belonging to the religious sect Branch-Davidians.

After the compound burned down ending the ATF-FBI siege, investigators uncovered 76 bodies, 25 of which were children. The Daily Mail uncovered a photograph (top) of David Chipman “posing in the aftermath of the Waco siege.”

Special Agent in Charge Chipman later left his career in law enforcement to make millions of dollars lobbying against the constitutional rights of the American people. At Everytown for Gun Safety and Giffords Law Center, he lobbied in favor of radical anti-gun legislation that would infringe upon the free exercise of the Second Amendment as we know it.

In particular, Chipman lobbied against the Concealed Carry Reciprocity Act despite being a gun owner and a self-professed concealed carrier.

Chipman also advocates for “arrest[ing prospective gun purchasers in gun stores] before committing crimes rather than responding after the fact” following a “failed background check.” For reference, according to an Obama Department of Justice report from 2011, the background check “false positive” denial rate is roughly 95 percent.

As Senior Policy Advisor for the anti-constitutional rights activist group Giffords Law Center, Chipman wrote an article entitled Legal and Lethal: 9 Products That Could Be the Next Bump Stock. The document purports to show how the ATF could arbitrarily ban certain shotguns, pistols, ammunition, and even magazines by regulating them under the National Firearms Act without an act of Congress.

However, the 6th Circuit court of appeals 3 judge panel ruled that “a bump stock cannot be classified as a machine gun” in Gun Owners of America v. Garland ordering a lower court to provide a preliminary injunction against the ATF’s implementation of the bump stock ban.

Clearly, a bump stock is not a machine gun and neither is a detachable magazine that can hold over 10 rounds. In fact, any attempted regulation based on the bump stock ban would be just as illegal and just as much an abuse of power.

Given the 6th Circuit’s ruling on the ATF’s overreach with the bump stock ban, does David Chipman still believe the ATF should mirror its actions on bump stocks to arbitrarily and illegally ban more firearms, firearm accessories, and ammunition?

During a period of dramatically increased rioting and calls to defund the police, David Chipman also publicly mocked Americans for choosing to buy firearms for the first time, saying that first-time gun owners were “more like Tiger King,” telling them to “only bring [their guns] out if the zombies start to appear.”

For all of the above reasons and more, President Biden’s ATF Director Nominee David Chipman is unfit to hold public office.

So please, contact your Senator and let them know that Gun Owners of America will score all votes in favor of David Chipman as anti-gun votes.

Next EmPowered 2A Meeting is this Monday!

Attention to all the female GOA members.

Here’s your chance to finally ask an expert on all things related to firearms—that is, what is a good first gun to get, which caliber of firearm should I start with, etc!

May’s Empowered 2A E.T.A. Talks event is with Sig Sauer’s very own director of training, Hana Bilodeau. She will be taking questions the whole hour. So be sure to come with questions about firearm training, self-defense, and gun ownership.

Critical Lawsuits Where NRA-ILA is Leading the Battle