Trailblazer Firearms is know for its unique design approach to concealable firearms, and is best know for its single-shot .22 LR chambered LC1P LifeCard micro-folding pistol. Now the company is turning heads yet again with a new foldable pistol-caliber carbine for 2022, the Pivot rifle. The Pivot is a ultracompact semi-automatic carbine chambered in 9 mm, which uses a unique design method to fold into a more portable and compact package for stowage.

Using a direct blowback action, the Pivot feeds from and accepts Glock compatible double-stack magazines. It features a separate upper and lower receiver group, which facilitate its folding capability. When unfolded, the Pivot measures overall between 26.7″ with the telescoping stock collapsed and 29.7″ with the stock fully extended. To fold the Pivot, the upper receiver rotates around 180-degrees on the lower and locks in place, resulting in a folded length of just 20.9″. This is complemented by a height of just 5.9″ without a magazine inserted, a width of 1.15″ and an unloaded weight of just 5 lbs., making the Pivot a very compact package for transport. 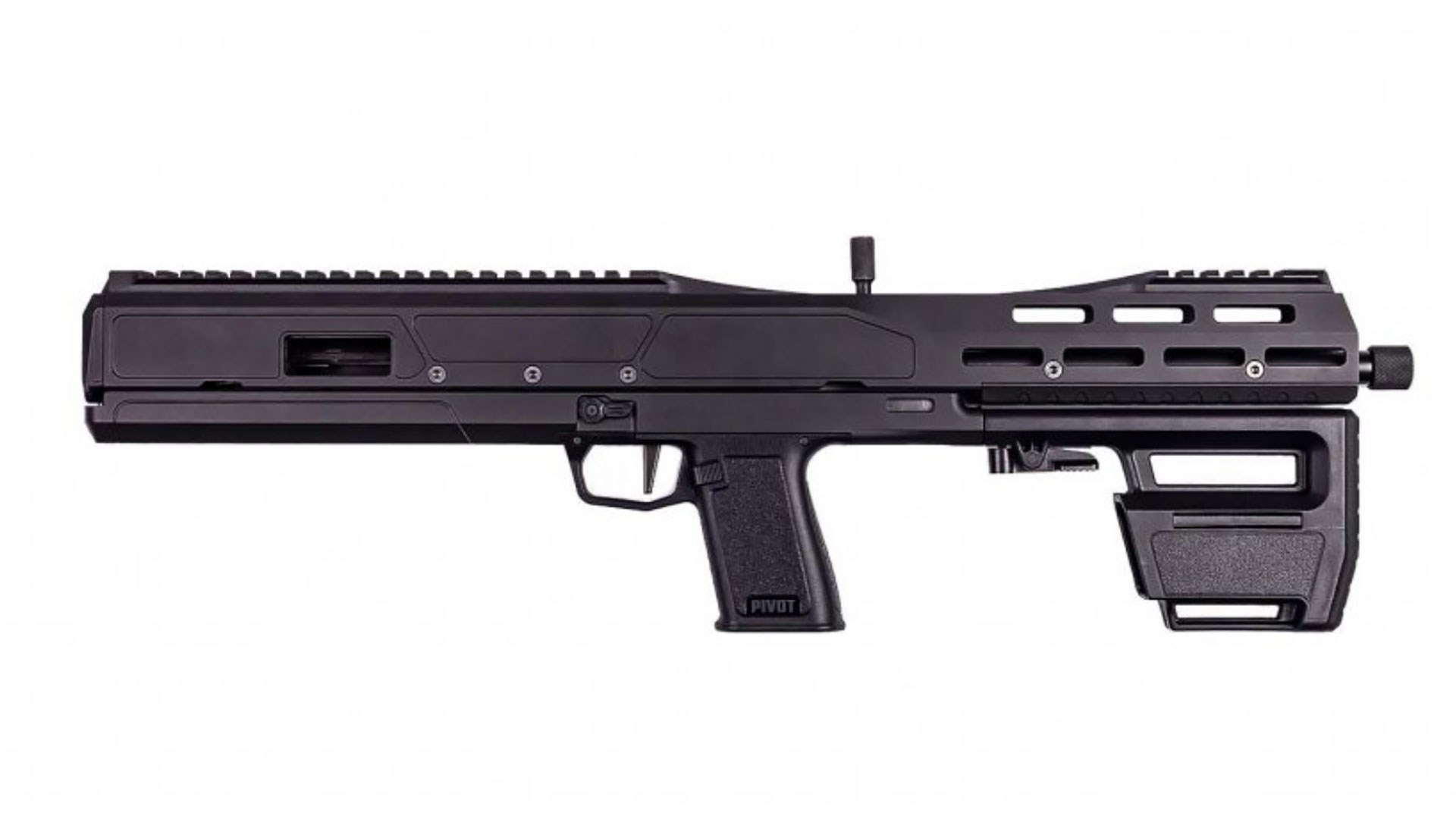 The Trailblazer Firearms Pivot Rifle folded, with the upper receiver flipped around 180 degrees into the stowed position.

The upper receiver of the pivot is made from aluminum, along with a portion of the lower receiver. The grip frame of the lower receiver is made from polymer, with a styling similar to aftermarket Glock grip frames. The threaded steel barrel and bolt carrier group are also treated with corrosion resistant finishes. A segmented Picatinny rail runs across the top of the upper receiver, and also includes a small segment at the front of the fore-end for mounting optics. There are also M-Lok compatible slots machined into the sides and bottom of the fore-end for further accessory attachment.

For controls, the Pivot rifle features a Glock Gen-4 style magazine release, a charging handle that sticks out of the upper left-hand side of the upper receiver and fore-end along with a manual safety lever located just above the trigger. There are also other safety features built into the Pivot to prevent a discharge while folded. As an added feature, the telescoping stock also has an extra magazine holder, positioned to where it doesn’t increase the overall height or length with a magazine stowed. The Pivot has a suggested retail price of $1,795.

For more information on Trailblazer Firearms’ new Pivot rifle and its other products, visit trailblazerfirearms.com.