U.S.A. -(Ammoland.com)- NFT’s are coming to the gun world whether we are ready or not. Non-fungible tokens or NFTs are not something that is easy to get the first time you hear of it, but I think that is because most people don’t explain the concept well. So, before we get into how NFTs will affect the gun world, we need to explain what they are in layman’s terms.

Anyone can copy a digital picture, but no one can change the blockchain. Ownership is what gives the NFT value. In fact, the provenance can make the NFT more valuable. Just like a physical item owned by a celebrity can pull in more money, an NFT owned by a star can inflate the value of a digital asset.

But what is it that gives something value? There are many different thoughts about that question, but I think what gives something value is the willingness of people to pay for that asset, and people are willing to shell out millions for the right to say that they own a digital asset. The NBA and other organizations are getting into the NFT game. Just like buying a physical set of basketball cards, the NBA is selling NFT based digital cards.

Now the gun world is getting into NFTs. Recoil Magazine is stepping into the NFT world. Its first drop (a term used for when NFTs are first released into the market) is ten NFTs of the controversial Chris Cheng cover from issue #56 of Recoil Magazine. The rainbow American flag rubbed some gun owners the wrong. The gun owners view the change to the flag as disrespectful.

The ten NFTs will be auctioned off by Recoil with a starting bid of $100. The auction proceeds will be donated to the Firearms Policy Coalition, Operation Blazing Sword, and the Asian Pacific American Gun Owners Association (APAGOA).

The Top Shot winner, Chris Cheng, sees this auction as just a first step for NFTs in the world. Cheng is a big believer in NFTs succeeding. He sees the adoption of NFTs around guns as unavoidable and over as a good thing.

“I’m incredibly excited for the potential of NFTs in the gun community where there are clear and compelling opportunities around digital collector’s cards, digital art collections, and digital guns in video games,” Chris Cheng told AmmoLand News. “We are at the very infancy of this movement, which I appreciate can be confusing, complicated, and perhaps even scary. But the fun and enjoyable experience of collectibles revolving around digital firearms products and experiences will eventually speak for itself. I predict firearms NFTs will soon be ubiquitous — not just in the gun community but the larger worldwide consumer market.”

Recoil isn’t the only company getting into the NFT space. The CryptoGunClub is another website selling NFT of firearms. The site will let users mint NFTs (a process of initially creating an NFT) of 1776 firearms. Some of the NFTs will be extremely rare and valuable. The site will be donating $50,000 from the NFT sale to veteran charities.

The group thinks that NFTs will have a place in the firearms marketplace in the future. The airsoft group is also using the NFT community for real-life events.

“We definitely think that NFTs have a massive potential for the collectible gun market in the future. People would be able to trade rare firearms with complete security and confidence via NFT-linked redeemable assets,” said Ian Asimov of the CryptoGunClub team. “This is sort of what we are doing; however, for us, NFTs also represent the membership to an exclusive airsoft club through which people will be able to network and participate in real-life events. NFTs certainly have many use cases for difficult-to-transfer items such as firearms.”

One cool thing that Rob McNealy of Krappy.Art and TUSC talk about when it comes to NFTs is that a royalty can be built into the NFT. Every time an NFT is sold to a new owner, the artist can get a percentage. This royalty can help support artist such as photographers that concentrate on guns.

Is the NFT market the real deal, or are we living in an NFT bubble? Only time will tell, but some big players are about to enter the market. Those players will be making announcements soon.

John is an NRA instructor and a constitutional activist. John has written about firearms, interviewed people of all walks of life, and on the Constitution. John lives in Northern Virginia with his wife and sons and can be followed on Twitter at @crumpyss, or at www.crumpy.com. 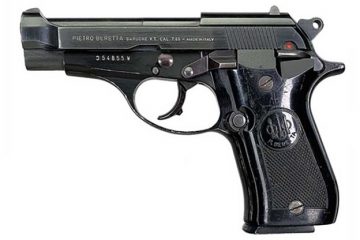