June 30, 2022 Guns In The News
Home»Commentary»REP. ERIC SWALWELL IS LYING TO YOU ABOUT PRESIDENT BIDEN’S GUN CONTROL LIES
Commentary

REP. ERIC SWALWELL IS LYING TO YOU ABOUT PRESIDENT BIDEN’S GUN CONTROL LIES

Rep. Swalwell published an op-ed in Newsweek and deployed the ruse.

“For decades, one of the most tried and true scare tactics by the gun lobby is that the government—specifically Democrats—are coming for your guns,” the Congressman wrote. “These misinformation campaigns have been used for years to scare law-abiding Americans into thinking they are going to be put under government surveillance to confiscate their guns.”

“Let’s be crystal clear—the Biden administration has no secret plan to take away your guns,” he claimed.

President Biden has on multiple occasions called the lawful firearm industry “the enemy.” A major selling point of his gun control agenda is that he claims he’s, “the only one to have taken on the industry and won.” “I’ve done it before and I’ll do it again,” he’s said.

The president was speaking about his ability to pass a ban on Modern Sporting Rifles (MSRs), which he incorrectly and pejoratively terms as “assault weapons.” President Biden, in the 1990s, when he was in the U.S. Senate, voted to ban America’s most popular selling centerfire semiautomatic rifle. He continues to push for a new ban today on the commonly-owned firearm. He claims the ban will drive down crime, but data from the Centers for Disease Control and Prevention (CDC) says the, “Assault Weapons Ban (AWB)…did not reduce crime rates.” In fact, when the ban expired, violent crime rates continued to drop even as MSR ownership skyrocketed to more than 20 million rifles in circulation.

The president has also repeated his favorite lie that the firearm industry is “the only outfit in the country that is immune,” from liability. This lie has been fact-checked into oblivion, with media saying, “Gun manufacturers can certainly be sued…Biden is wrong to say gun manufacturers are alone.”

The president lies about his wishes to ban certain lawfully-manufactured and legally-purchased firearms, as well as his wishes to shut down an entire industry that supports the ability of Americans to exercise their Second Amendment rights. That would certainly qualify as, “taking away guns.”

Rep. Swalwell would ban MSRs as well and he’s not alone. He’d go even further, telling Fox News’s Tucker Carlson he’d implement a forced government buyback scheme of the firearms and even, “criminally prosecute any who choose to defy it by keeping their weapons.” Rep. Swalwell went so far as to absurdly suggest if Americans still refused to give up their firearms to a government confiscation scheme, the U.S. government would use nukes against holdouts.

Rep. Swalwell would make confiscation easier, if he had his way, by requiring a national firearm registry. That’s the only way a universal background check could work, a policy that both Rep. Swalwell and President Biden support. Universal background checks (UBCs) are unenforceable without mandatory registration – which is illegal under the 1986 Gun Control Act and 1993 Brady Act.

In his op-ed, Rep. Swalwell says claims about a national gun registry are “conspiracy theories,” and that, “The simple truth is that a gun registry does not exist and is not even being contemplated to illegally track law-abiding individuals who exercise their Second Amendment rights.” He even twists one of my tweets to suggest the firearm industry agrees with his bogus claims.

It’s true – the Bureau of Alcohol, Tobacco, Firearms and Explosives (ATF) does not currently maintain a searchable national firearm registry. It does, however, keep an Out-of-business Records (OBR) database to trace firearms when they are used in a crime. That collection of records doesn’t allow anyone to run a search for how many and what kind of firearms are owned by any one individual.

About 30 percent of all firearm traces involve searching OBR data. The most recent ATF trace data shows that the average time between when a firearm was originally sold lawfully after a background check and before it was recovered by law enforcement has been close to 10 years as recently as 2017. Searching very old records rarely yields actionable intelligence to law enforcement. That’s why NSSF has long supported requiring ATF to purge records that are older than 20 years to save taxpayer money and to use those dollars to put more agents on the streets to stop crime from occurring in the first place.

Rep. Swalwell knowingly took the tweet out of context in order to lie again about what would be required if a universal background check were to be adopted.

President Biden is clearly doing the bidding of his gun control donors. After repeating his lies about the firearm industry and what his policies would do to law-abiding Americans, there is no doubt that President Biden would indeed go after lawful gun owners and dismantle the industry that provides for the exercise of the Second Amendment. Rep. Swalwell is simply carrying the president’s gun control water because he would do the same exact thing.

REP. ERIC SWALWELL IS LYING TO YOU ABOUT PRESIDENT BIDEN’S GUN CONTROL LIES 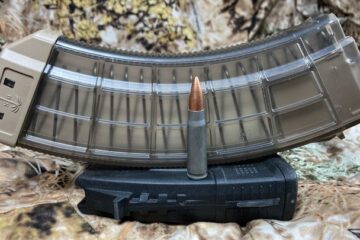