Learning To Hunt On Your Own Is Rewarding

5 Reasons to Choose a 10 mm for Self Defense

If someone says “Chiappa Rhino” to you, most gun owners will get an image in their heads. There’s no questioning that the Rhino’s distinctive appearance, beloved by sci-fi movie prop masters, leaves an impression on you. It’s also a safe bet that none of those people will think about a Chiappa Rhino that’s built from the ground up to conquer the most accuracy-intensive shooting sport ever: NRA Police Pistol Combat. And yet that gun exists, and it carries an eye-watering $2,990 price tag. Meet the Chiappa Rhino Match Master 6.

Until the events of the Dunblane Massacre in 1996, Wilson Custom Guns was producing about 200 high end custom competition revolvers a year. When you take into account the amount of hand fitting one of these guns requires, that is a lot of guns coming out. After the U.K. essentially banned handgun ownership, Wilson Custom stopped making handguns for some time, until recently, when it entered into a collaboration with Chiappa.

The result of that collaboration is a custom gun that you can get direct from the manufacturer that is 100-percent ready to go for either PPC competition, or NRA Action Pistol’s Metallic Division. Both of those shooting sports require tremendous accuracy from a handgun, including shots to 50 yards.

The Match Master is built with specific features in mind to make it easier for the shooter to deliver those 50 yard hits. The first is the most obvious when you’re looking at the gun: the Aristocrat rib sight. Aristocrat sights have a dial on the right side by the rear sight, which allows the shooter to click between three preset zeroes. For example, a Bianchi Cup shooter might have the first position set for a 10-15 yard zero, the second for 20-25 yards, and the third for a 35-50 yard zero. Turning the dial clicks the rear sight into any of these positions, which takes Kentucky windage out of the equation. When you’re trying to nail a 4-inch circle at 25 yards, you don’t want to guess where the round is going to hit.

That’s not the only competition feature on the Chiappa Match Master. The grips are Hogue Big Butt (yes, that is really their name), which have a…well, they have a big butt. That feature exists for going prone on PPC and Action Pistol stages—the gun is grounded on the Big Butt, which keeps the sights higher in the shooter’s eye line. This makes the prone position more comfortable, which means better hits. The action has been smoothed out, with a nice 9-pound double-action pull. Unlike other Rhino revolvers, the Match Master is not chambered for .357 Magnum. It’s chambered for .38 Special, and the cylinder is sized appropriately for that caliber. This reduces the amount of freebore, decreases leading, and increases accuracy potential.

All those features are neat tricks of course, but how does it shoot? We took the Rhino to the range to find out, and the results were great. With Federal Gold Medal Match at 25 yards, the Match Master shot a 2.02-inch group that had one shooter-induced flier. Removing the flier shrinks that group to 1 inch, which is a better representation of the Match Master’s mechanical accuracy. The surprising performer of the day was Speer 158 grain +P Lawman FMJ, which turned in a 2.3-inch group at 25 yards. Normally, FMJ practice ammo isn’t that accurate, but out of the Match Master almost everything was lights out. The gun absolutely delivers in the accuracy department.

The surprising performer of the day was Speer 158 grain +P Lawman FMJ, which turned in a 2.3-inch group at 25 yards.

With Federal Gold Medal Match at 25 yards, the Match Master shot a 2.02 inch group that had one shooter induced flier. Removing the flier shrinks that group to 1 inch.

Is the Chiappa Match Master ready to take to a bullseye, PPC, or NRA Action Pistol match? If all we’re evaluating is the gun’s performance over 250 rounds, yes it absolutely is. But the elephant in the room is the same as it always is for Rhinos. Will the gun hold up?

The internals of a Rhino are incredibly complex, and have proven fragile in the past. The nearly $3,000 price tag would certainly make me pause before slapping my AMEX down for a gun that might not survive the training necessary for a shooting season. For example, training for Bianchi Cup, the crown jewel of NRA Action Pistol, requires about 5,000 rounds if you’re even a little serious. Would this gun hold up for that? I have no idea.

But don’t let that leave a bad taste in your mouth, because it’s important to focus on what this revolver is, and that’s a purpose-built, laser-beam-accurate competition revolver. It has a great trigger pull, perfect sights, shoots little tiny groups, and my sample is lovingly built with care and precision. Could this be a winning gun at PPC or Bianchi Cup? Yes, without question. All it needs is a good hand behind the trigger, and it will slay X-rings left and right. That’s what it’s built to do, and in that, it succeeds. 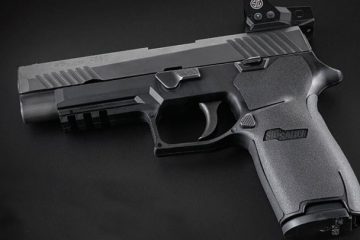