As soon as an independent Czech state was formed from the ashes of the Austro-Hungarian Empire following the First World War, it quickly became known as a nation with worldwide influence in firearm design. During the Cold War, despite being behind the Iron Curtain, the Czechs resisted the hegemony of Soviet firearms, opting for their own indigenous designs, such as the roller-locked vz. 52 pistol and their definitely-not-an-AK vz. 58 rifle. This influence would extend well beyond Eastern Europe. The telescoping bolt of the Sa 23 submachine gun would inspire the Uzi, and the CZ 75 pistol would kick off the wave of double-action, semi-automatic “Wonder Nines.”

Now located in the Czech Republic, the contemporary Czeská zbrojovka a.s. Uherský Brod (CZ) continues the tradition of Czech firearm innovation. Established in 1936 as the “Czech Armory” in the Moravian town of Uherský Brod, as far as possible from the nation’s troubled border with Nazi Germany, the company was privatized in 1992 and opened up its U.S. subsidiary, CZ-USA, in 1997. Now one of the largest small arms manufacturers in the world, CZ exports its civilian and military/law enforcement products to nearly 100 countries.

Among these products are the Bren service rifle and the Scorpion submachine gun, and CZ-USA of Kansas City, Mo., is offering semi-automatic versions of both in pistol and rifle form. While the focus here is on the Bren large-format pistol, full reviews of the other unique members of the Bren and Scorpion families can be found at americanrifleman.org.

CZ Bren 2 Ms
The “Bren” name comes from the famous World War II British light machine gun, a design based on the Czech vz. 26 (the “BR” in its name came from the Czech Brno factory where the gun was designed, the “EN” from the Royal Small Arms Factory at Enfield, where they were manufactured). The vz. 26, along with its derivatives, was one of the most successful magazine-fed light machine guns in history. It was adopted by two dozen countries, and its Bren offspring spread throughout the British Commonwealth, some being converted to 7.62×51 mm NATO, and is still in use today.

The charging handle on the CZ Bren 2 Ms (above) can be switched to either the right or left side. It does not reciprocate with the bolt, but can be used as a forward assist.

In 2005, CZ began working on a replacement for the aging vz. 58 service rifle, which had been in Czech service for nearly half a century. Known as “Project 805,” the resulting rifle follows the ArmaLite AR-18 design, using a rotating bolt in a square carrier, operated by a short-stroke gas piston. The upper receiver was machined from a solid block of 7075-T6 aluminum alloy, and the lower housing, which holds the fire-control group and magazine well, is carbon-reinforced polymer. The Bren system is modular, and chamberings can be changed by swapping out the barrel, bolt head, firing pin, mainspring and magazine.

In 2010, the Bren 805 A1 was adopted as the new Czech service rifle. In Czech service, the Bren uses a 5.56×45 mm NATO magazine compatible with the HK G36. Export models, including those sold in the U.S., use AR-15-type, NATO-compatible magazines. The magazines for the 7.62×39 mm Bren models are proprietary, and are inserted straight up into the receiver rather than rocking in, to allow for a bolt-hold-open feature.

CZ-USA imported a limited number of Bren 805 5.56 mm pistols and rifles in S1 semi-automatic configuration beginning in 2015. That same year, CZ introduced an updated Bren. The Bren 2 controls are entirely bilateral; the safety selector is positioned above the pistol grip to be operated by either thumb. The magazine release button is in the AR-15 position on the right side, with a second release incorporated into the lower corner of the magazine housing on the left side (both 7.62×39 mm and 5.56 mm NATO magazines drop free). An enlarged AR-15-style paddle-type bolt release is on the left side. There is also a bolt release located inside the trigger guard that can be operated with either hand, making locking back the bolt with the magazine removed a cinch. The charging handle is non-reciprocating—it locks to the bolt carrier so that it can act as a forward assist, but unlocks when it is in the forward position so that the bolt can move independently while firing. The charging handle can be easily swapped to either side of the firearm.

The bolt and carrier system of the CZ Bren 2 Ms shows obvious influence from the ArmaLite AR-18 design. The gas system on the CZ Bren 2 Ms is adjustable either by hand or using a cartridge. The three positions are “normal,” “adverse” and closed for manual cycling. The gas tube assembly on the CZ Bren 2 Ms can be cleaned on both the outside and inside with the scraper portions of the supplied multi-tool.

To lighten the design, the upper receiver, lower housing, gas system and handguard were streamlined, saving about a pound compared to the original Bren 805. The Bren 2 has an adjustable gas regulator with three positions that can be changed by hand: a “standard” position, an “adverse” position that opens a larger port for cold or dirty conditions, and a third, closed position that blocks the gas system for manual functioning.

CZ-USA began offering the Bren 2 Ms (modular semi-automatic) in pistol format in 2019. The pistols are offered in 5.56 mm NATO and 7.62×39 mm, each in three barrel lengths. In pistol form, the Bren 2 is nearly identical to the military rifle, except that it has a receiver endcap instead of a stock, and is semi-automatic-only. A 16″-barreled 5.56 mm rifle version is scheduled to be released this year. For 922(r) compliance, the Bren 2 rifle is outfitted with American-made parts, including a modular handguard similar to the one used on the Scorpion rifle, and uses a factory-style folding and telescoping stock.

The Bren 2 Ms has a polymer lower housing with an integral pistol grip that features a storage compartment for such items as the supplied sight-adjustment tool (left). The folding rear sight is a dual-aperture model adjustable for windage with the supplied sight tool (middle). The folding front sight is a post-style unit adjustable for elevation using the tool (right). The sight system features three “luminescent” dots that glow after being exposed to light.

In pistol form, the Bren 2 comes equipped with a receiver endplate that has the provision for an AR-15-type pistol buffer tube for mounting an arm brace or cheekpiece. The upper receiver and handguard feature a 14.75″ section of Picatinny rail. The aluminum handguard has one M-Lok-compatible slot at each of the 3-, 6- and 9-o’clock positions. The Bren 2 pistol is supplied with metal, folding front and rear sights. The front post is adjustable for elevation, and the rear aperture for windage. A three-dot “luminescent” system on the sights glows after being exposed to light. The Bren 2 pistol’s flash hider is compatible with the NATO Rotex-V suppressor attachment system.

The Bren 2 Ms pistol I tested was a 7.62×39 mm version with a 9″ barrel, a mimic of the Bren rifle adopted by the GIGN, the elite French police tactical unit. The sample pistol was supplied with a factory test target that showed a three-shot, 25-meter group of just under half-an-inch (no doubt fired from a machine rest). In my testing, from a bench at 25 yds., the pistol averaged 1.5″ groups using the factory sights. Accuracy is aided by the Bren’s exceptional trigger. Two-stage, it has a brief initial take-up before breaking crisply at just more than 3 lbs., followed by a short and tactile reset. From the 9″ barrel, muzzle velocity still approached 2000 f.p.s. with 123-gr. bullets. Reliability was perfect with every type of ammunition I used, including steel-cased budget rounds, high-end self-defense loads and even round-nosed, soft-point hunting ammunition. 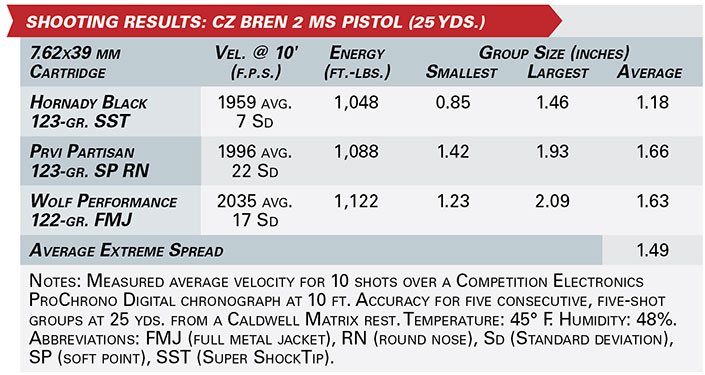 Disassembling the Bren is simple. Pushing out the front takedown pin allows the lower housing to be removed. The rear pin releases the receiver endcap (or stock on the rifle version), allowing the mainspring and bolt group to be pulled out of the rear of the receiver. Removing the firing pin allows the cam that holds the bolt head in the carrier to be removed. Gas system maintenance is accomplished by turning the gas adjuster tube to the disassembly position and then removing it from the barrel-mounted gas block, along with the piston, rod and spring.

Conclusion
There were big shoes to fill when CZ applied the moniker of an iconic firearm to a contemporary product. In this respect the company has succeeded. While the basic design of the modern Bren is not ground-breaking like its namesake, it lives up to the same legacy of quality, reliability and versatility. With its Bren 2 Ms, CZ-USA offers a civilian firearm based on well-engineered and extensively tested product used by military and law enforcement around the world. The result is a reliable and relatively affordable firearm that continues to showcase the global influence of the Czech Republic’s foremost firearm manufacturer.

For more information on the accessories available for the CZ Bren, along with a complete review of the Scorpion Evo 3 S1 micro pistol and an assembly video of the Manticore Arms Scorpion Bullpup Kit, visit americanrifleman.org/czskorpion.