In the spring of 2019, Henry Repeating Arms introduced the new Side Gate Lever Action rifle in a number of chamberings. Developed to answer consumer demand, and designed to offer the shooter the best of both worlds, the lever gun’s tubular magazine can be loaded either from the front, in typical Henry fashion, or at the receiver via a gate on the right side.

This marks a major evolution for the company; since resurrecting the Henry name back in 1997, this is the first lever-action produced by the manufacturer that offers a traditional side-loading gate. The new Side Gates are being offered in .30-30 Win., .35 Rem., .38-55 Win. (already approved for use in Single Action Shooting Society competitions) and .45-70 Gov’t. Our test sample for the following review was chambered in the very popular .30-30 Win. cartridge.

Initial inspection revealed the Side Gate to be of heirloom quality, with its highly polished two-piece brass receiver and beautiful walnut furniture. A closer look at the brass parts revealed them to be expertly polished without scratches or casting marks. In addition to the receiver, Henry also makes the barrel band and buttplate from brass, and they provide a pleasing contrast to the high-polish blued parts, including the gun’s bolt, lever and barrel. Henry takes great pride in building its guns exclusively from American-made parts and components.

The wood on our sample was equally impressive. Both the buttstock and fore-end were tightly grained, and Henry laser-cut them with checkering. The wrist of the buttstock and fore-end possesses a delicate floral scroll inside the checkering pattern that is both beautiful and functional. An oval on each side of the fore-end has “Henry” cut into it. Wood-to-metal fit was exemplary.

In order to front-load the Henry, rotate the inner magazine tube to disengage it from the exterior of the under-barrel magazine, and pull it out far enough that the follower clears the cutout in the bottom of the magazine. Cartridges can then be loaded into the tube, and the operation is completed by pushing the inner magazine tube back down into position and turning it to lock it in place.

To top-off or load the gun using the side gate, simply push the cartridges into the port as you would any other lever gun. Unlike most side-gate lever-actions, unloading the gun is quick and easy, as the shooter can simply remove the internal magazine tube and allow the cartridges to slide free of the rifle without the need to cycle each cartridge through the action.

The Side Gate can be loaded via a cutout in the magazine tube or, for the first time on a Henry, through a side-loading gate on the receiver’s right. The brass-frame gun has blued steel for its lever, bolt, barrel, magazine tube, hammer and trigger. It takes down much like a Marlin Model 336.

Unlike other brands of traditional lever guns, the Side Gate’s hammer does not have a half-cock position, however, it can be safely carried with a round in the chamber and the hammer down. Henry uses its patented transfer bar safety in this gun, and it prevents the rifle from firing unless the hammer is cocked and the trigger pulled. If, during the course of firing the user wishes to stop shooting, he or she simply needs to use a thumb to carefully ease the hammer forward while pulling the rifle’s trigger.

All current Henry Side Gate models employ 20″ barrels, and our .30-30 test gun’s tube was cut with 1:12″ right-hand-twist rifling. The rifle’s semi-buckhorn rear sight is adjustable for both windage and elevation, and the ramped front sight is equipped with a 0.062″ ivory bead. Another selling point of the rifle’s flat-top design is that its receiver top is drilled and tapped for scope use.

For our evaluation, Henry sent us a Picatinny rail mount that attaches to the top of the receiver with three screws. We used medium-height scope rings to attach a Leupold VX-2, 2-7X 28 mm Ultralight scope, but once we had the scope mounted, we discovered its ocular bell was resting on the rear sight blade, even after we removed its elevator.

Fortunately, it was an easy matter to remove the rear sight’s screw and drive it from its dovetail. Taller rings would have been another solution if we’d had a set handy. We fired all groups from a seated position using a DOA Tactical portable shooting bench and a Caldwell rifle rest with our targets set out at 100 yds. Our evaluators were careful to rest the fore-end of the rifle, and not the magazine tube, on the rest while shooting so as not to cause a change in point of impact on the targets.

The trigger on our test sample was pretty good; it broke on average at 5 lbs., 12 ozs., with just a hint of creep and not much overtravel. Our single best five-shot group measured under an inch (0.92″) and was recorded with Winchester’s 170-gr. Silvertips. This load also averaged about 1.5″ groups for the five groups we fired with it. Overall, the gun exhibited fine accuracy with the average extreme spread for the three loads tested coming in at 1.83″.

Throughout our shooting sessions the Side Gate performed admirably. As one shooter noted, the frame and side gate itself are nicely polished with the sharp edges removed for pain-free loading. The action is smooth and did not bind, and is therefore capable of very rapid manipulation. 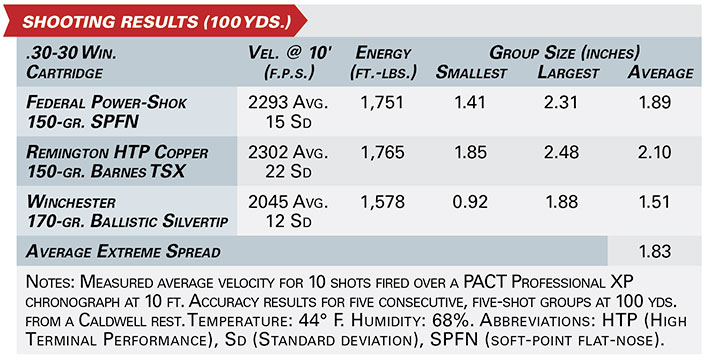 Henry recommends cleaning the rifle from the breech end, but oddly enough, does not detail the removal of the gun’s bolt in the owner’s manual. If you’re familiar with the Marlin Model 336, the procedure is very similar. After ensuring the chamber and magazine are empty, rotate the lever to its fully forward position. Now remove the screw that connects the lever to the receiver. Once accomplished, remove the lever from the gun. Now remove the bolt through the rear of the receiver.

Pay close attention to the position of the ejector, as it will most likely fall free from the gun when the bolt is withdrawn. When re-assembling the rifle, the ejector must be in its proper position, as the bolt has a groove for it. The bolt will capture the ejector, but leave the bolt in its open position—as if a round had just been ejected. Replace the lever in this open position and re-install the lever screw. Cycle the lever several times to ensure the gun is correctly assembled.

Customers wanted a Henry capable of side loading, and the Side Gate Lever Action delivers. It’s a solid, accurate and reliable shooter, and its beautiful cosmetics should make it a rifle that can be proudly passed down from generation to generation.