Conventional” is a word that is rarely applied to the work of George Kellgren. The prolific engineer and designer, who was the 2019 winner of American Rifleman’s Golden Bullseye Pioneer Award, has repeatedly exhibited outside-the-box thinking with his creations, from the Grendel P10 handgun to the current Kel-Tec lineup of bullpup rifles and shotguns. It seems that just when you think you have Kellgren and Kel-Tec figured out, they pull something new out of the hat. The most recent case in point is the Kel-Tec P50, a large-format semi-automatic pistol chambered in the recently NATO-standardized 5.7×28 mm FN cartridge that, in both form and function, is anything but conventional. 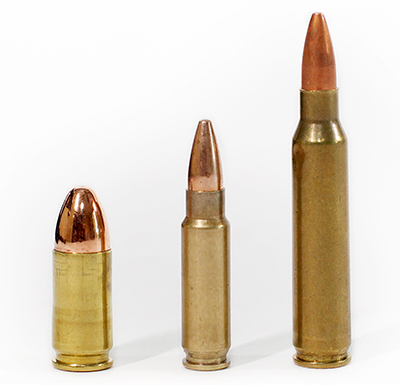 While the P50 is unlike any of Kel-Tec’s other current firearms, the pistol has its roots in Kellgren’s earlier designs, especially those based around .22 rimfire cartridges. In 1990, Kellgren’s Grendel, Inc. introduced the P30, a .22 WMR-chambered semi-automatic pistol that utilized a 30-round box magazine housed within the grip. This spawned an entire family of 30-round, .22 WMR firearms, including the R31 rifle, as well as a pistol that was a stockless, short-barreled version of the rifle. Known as the P31, it was designed to be carried and fired with the aid of a sling. In 2011, Kel-Tec updated the P30 concept when it introduced the .22 WMR-chambered, 30-round PMR-30 handgun, followed by the CMR-30 carbine. This year, Kel-Tec has stepped up its high-velocity .22 game with the P50, a product that Director of Sales Derek Kellgren called, “a firearm that may well be our most innovative yet.” Here’s why.

In 1990, the 5.7×28 mm was introduced as a proprietary cartridge for Fabrique Nationale’s P90 personal-defense weapon. It was designed at the request of NATO, which was looking for a cartridge/firearm combination to replace its current inventory of handguns and submachine guns in 9 mm NATO that could, with armor-piercing ammunition, defeat soft body armor. Eight years later, FN released a semi-automatic pistol, the Five-seveN, chambered for the cartridge. Though FN began to offer the Five-seveN pistol to civilians in 2004, and the following year brought out a semi-automatic-only, 16″-barreled carbine version of the P90 known as the PS90, it would be nearly two decades before the 5.7 mm cartridge gained widespread popularity on the civilian market. This began when a few manufacturers other than FN began introducing their own 5.7×28 mm FN firearms, including CMMG, Diamondback and MasterPiece Arms. Last year’s introduction of the Ruger-57 pistol kicked the domestic 5.7 mm ammunition market into high gear, with new loads available from Federal’s American Eagle brand, as well as the Gold Dot self-defense line by Speer. With the cartridge now more popular than ever, it makes sense that Kel-Tec would add a firearm in that chambering to its lineup. 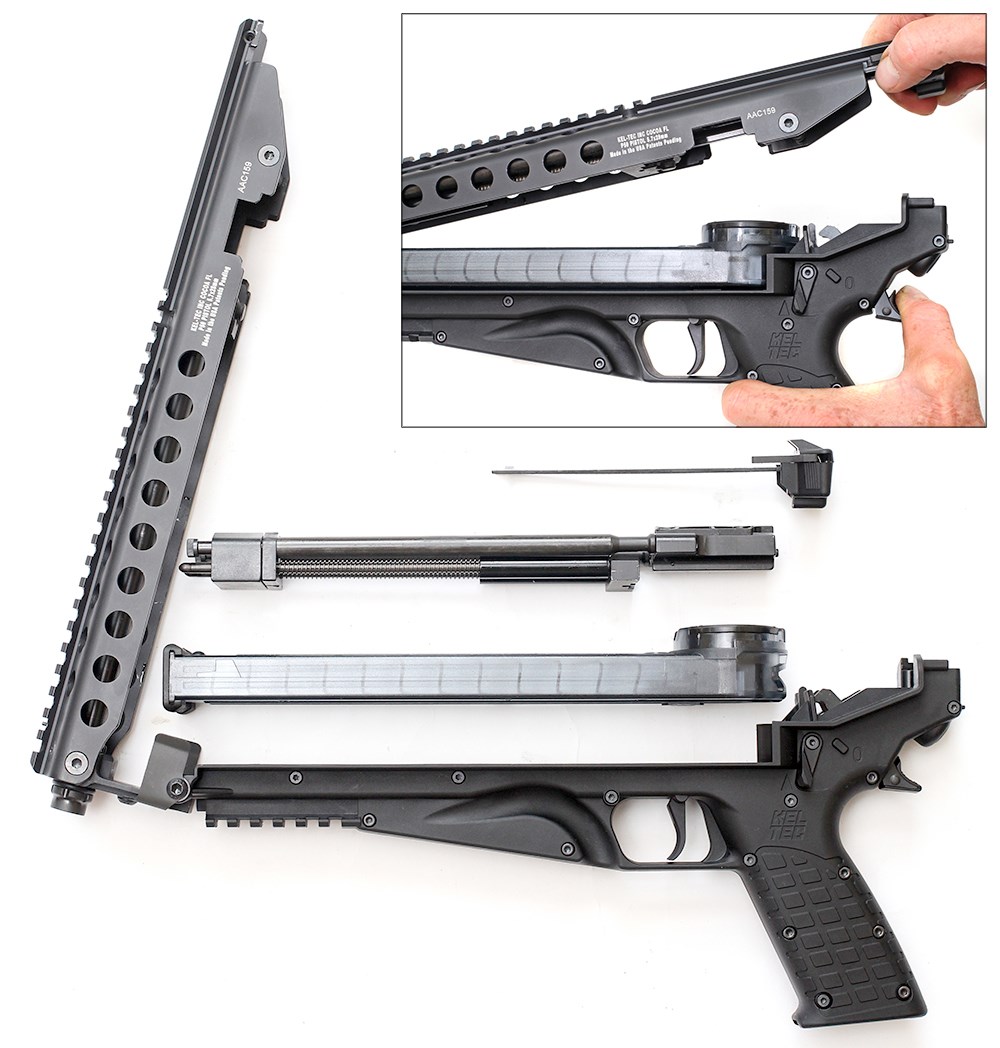 The P50 breaks down into four main parts for cleaning and maintenance. A release lever at the rear of the grip is pressed downward, allowing the receiver to hinge upward from the grip frame (inset) so that the magazine can be installed or removed.

At the heart of the P50 is not only the FN P90’s cartridge, but also the company’s 50-round, horizontally mounted magazine. This polymer magazine stacks its cartridges into a double column that is perpendicular to the firearm’s bore axis. A spiral feed ramp rotates the rounds into alignment so they can be fed into the chamber. The magazines can be loaded by hand without tools and are translucent, so the user can keep track of the remaining rounds. A magazine loaded with 50 rounds adds a pound to the P50’s overall weight. Designed to make the FN P90 a compact arm, the magazine functions the same way in the P50. The pistol holds 50 rounds without the increased width or height that a conventional box or drum magazine of that capacity would require. Besides FN, several aftermarket manufacturers make magazines for the P90, including ProMag Industries, and two ProMag magazines are supplied with the P50. Ten- and 30-round magazines are available from FN for those who live in areas with local magazine-capacity restrictions.

Like the FN P90, the P50 uses a direct-blowback action, its bolt riding on two guide rods that compress dual recoil springs as it moves backward. This mechanism is contained in a perforated aluminum receiver. The magazine is mounted in the reverse position of the P90, with the rounds feeding upward. The fire-control components are contained in the lower polymer housing that uses a grip of similar shape and texture as Kel-Tec’s other firearms.

The P50 has a slightly smaller profile and, at 3 lbs., 8 ozs., empty, is about 2 lbs., 8 ozs., lighter than the FN P90. The area forward of the trigger guard has a molded-in gripping surface (as a pistol, you can’t mount a vertical grip and stay clear of NFA registration), followed by a 2.5″ section of Picatinny rail for mounting lights, lasers and other accessories. The top of the receiver has a 9″ Picatinny rail section. The rail also houses open sights that consist of a front post adjustable for elevation and a rear notched blade adjustable for windage. The radius of the open sights is 13″. 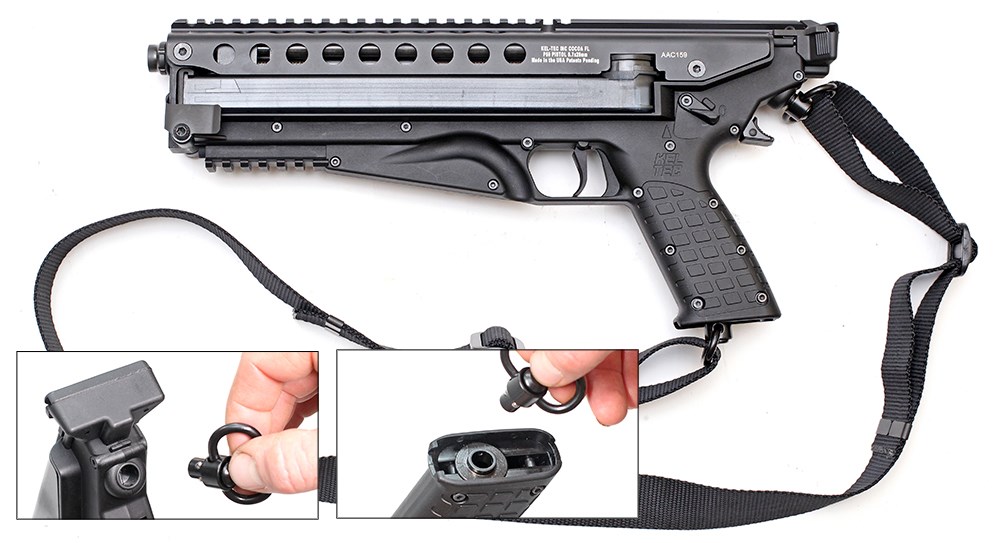 The Kel-Tec P50 features two quick-detach sling-mounting points, one in the pistol grip and one at the rear of the receiver.

The P50 has two quick-detach sling-mounting points, one in the pistol grip and one at the rear of the receiver, and the pistol is supplied with a nylon sling and swivels. Not only for carry, the sling can be used as a shooting aid by pushing out against its tension to stabilize the pistol. Unlike a single-point system, the swivel locations at the top and bottom of the pistol equalize the tension for additional stability, making for a very stable off-hand shooting platform. Even without the sling, a fully loaded P50 balances well with a two-handed shooting grip.

A set of iron sights is built in to the Kel-Tec P50’s optics rail, consisting of a front post adjustable for elevation (inset, arrow) and a notched rear blade adjustable for windage (r.).

To load the P50, a release lever at the rear of the grip is pressed down, which allows the receiver, containing the barrel and action, to be hinged upward. A loaded magazine is placed into the action, and the receiver is closed (a motion that evokes the fun of snapping closed the top cover when loading a belt-fed firearm). With a firing grip, the release lever rides on the web of the hand like a beavertail, preventing it from accidentally being actuated. The P50 uses a T-shaped charging handle that pulls straight back from the rear of the receiver. It’s possible to keep the P50 close to the body and reach over the receiver to grab the wings of the charging handle for the overhand rack you’d give a semi-automatic pistol with a slide. A safety lever is located above the grip on both the right and left sides for easy actuation by the thumb, which combines with the charging handle and release lever designs to provide ambidextrous operation.

The muzzle of the P50’s barrel is threaded 1/2×28 TPI, allowing for the attachment of accessories, such as this YHM Turbo K suppressor, and the pistol comes with a thread protector (inset).

The P50’s 9.60″ barrel is just shy of the barrel length of FN’s P90, meaning it nearly yields the maximum performance for which the 5.7 mm cartridge was originally designed. For an apples-to-apples comparison, the American Eagle 40-grain ammunition I fired from the P50 produced 19 percent more muzzle velocity (1,980 f.p.s. vs. 1,663 f.p.s.) and 41 percent more muzzle energy (348 ft.-lbs. vs. 246 ft.-lbs.) than the same cartridge fired from the 4.9″ barrel of the Ruger-57 we tested last year. The muzzle of the P50’s barrel is threaded 1/2×28 TPI to accept a muzzle device or suppressor, and the pistol is supplied with a thread protector. 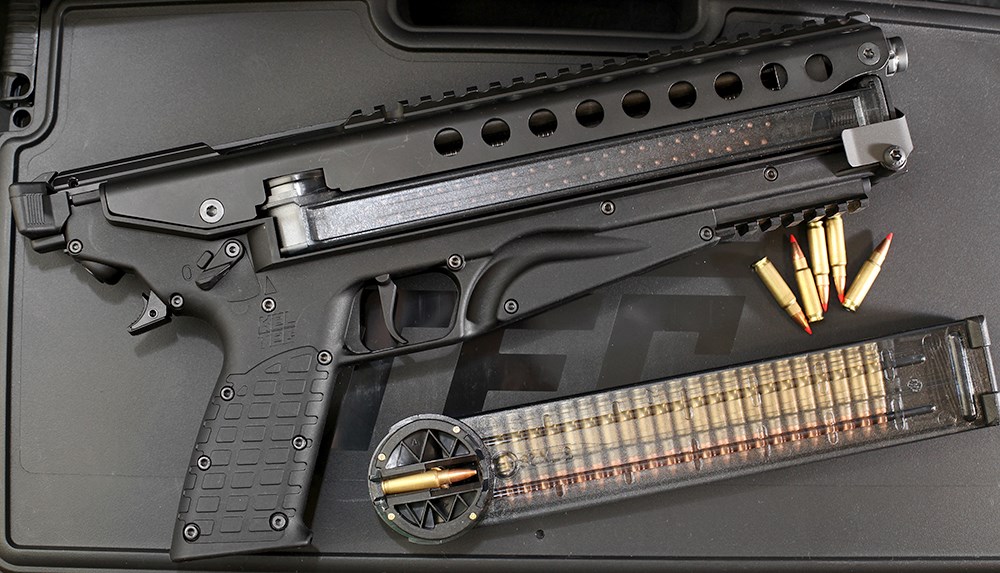 The Kel-Tec P50 employs the FN P90/PS90 magazine design, which is a 50-round box that mounts horizontally on the pistol. In this case, however, the cartridges feed upward into the chamber.

While most users will undoubtedly use an electronic optic on the P50, we opted to go with a Weaver Classic 2.5-8X handgun scope. Not only does it complement the P50’s stormtrooper blaster vibe, the magnified optic helped us get the most accuracy out of the pistol. Unlike most conventional centerfire semi-automatic handguns, the barrel of the P50 is fixed to the receiver, to which the scope is also solidly mounted. Accuracy is aided by the P50’s trigger. After the initial take-up, followed by a slight amount of creep, it breaks at 3 lbs., 8 ozs. The result of all these factors was that we averaged five-shot groups at 25 yards shooting from a rest of around 0.75″. Reliability was 100 percent from the first round, with the pistol functioning perfectly with all ammunition types that we used.

Unlike the bottom-ejecting FN P90, the P50’s ejection port is on the upper receiver. Empty cases are ejected at 45-degree angles up and to the right of the shooter. The size and weight of the P50, combined with the mild recoil of the 5.7×28 mm FN cartridge, make for a pleasant shooting experience, either from the bench or offhand, with or without the sling.

Kel-Tec characterizes the P50 as “adaptable”—a claim the author confirmed after fitting it with a bipod and a 2.5-8X Weaver handgun scope and firing it using the included two-point sling (l.). As such, it could serve well as a lightweight, compact varmint-hunting rig.

Due to the design of the P90 magazine, the bolt of the P50 does not lock open when empty. The pistol’s hammer must be cocked to open the action, so if you dry-fire on an empty chamber after your last round, you must re-cock the action before you can reload. The P50 will fire without the magazine in place. Because the motion of opening the P50’s action to remove the magazine is akin to running the slide on a conventional handgun, it might be possible to forget that there is a round in the chamber after the magazine is removed. To unload the P50 when it had a round in the chamber, we developed the following technique: Using the off hand, run the bolt open with an overhand grip to eject the round from the chamber and then clamp your hand on the charging handle to hold the bolt open. Use the thumb on the shooting hand to operate the release lever. Open the action. Remove the magazine. Let the bolt run forward.

The P50’s hinged design makes cleaning and maintenance a snap. Open the top cover, and the bolt, recoil spring and guide rod can be removed as a single assembly. The barrel stays mounted in the receiver and can be cleaned from the chamber end. 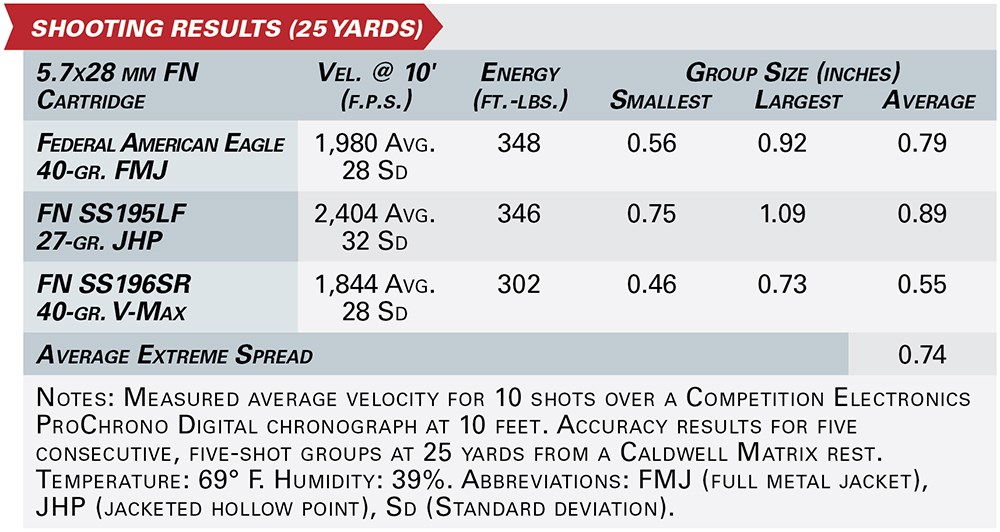 At this point in the story, you’re probably thinking, “This is all very impressive, but why?” Kel-Tec’s tagline for the P50 is “Unique, Adaptable, Retro,” and we wouldn’t argue with any of those adjectives. In its marketing literature, the company promotes the P50 as applicable to law enforcement or private security usage. The P50’s compact size, ease of use and capacity evokes the design criteria of firearms such as FN’s P90 and the Heckler & Koch MP7 and would certainly lend itself to home defense with the addition of an electronic optic and light. For those interested in the FN P90’s cartridge and magazine, the P50 is an affordable firearm that utilizes both. After the P50 demonstrated its accuracy from the bench, we were curious about the 5.7 mm cartridge’s performance as a close-range varmint round and, to this end, left the scope on and mounted a bipod to its lower rail to make a compact backpack or truck gun. Like other Kel-Tec firearms, you make the P50 into what you want. “Unique, Adaptable, Retro,” indeed. 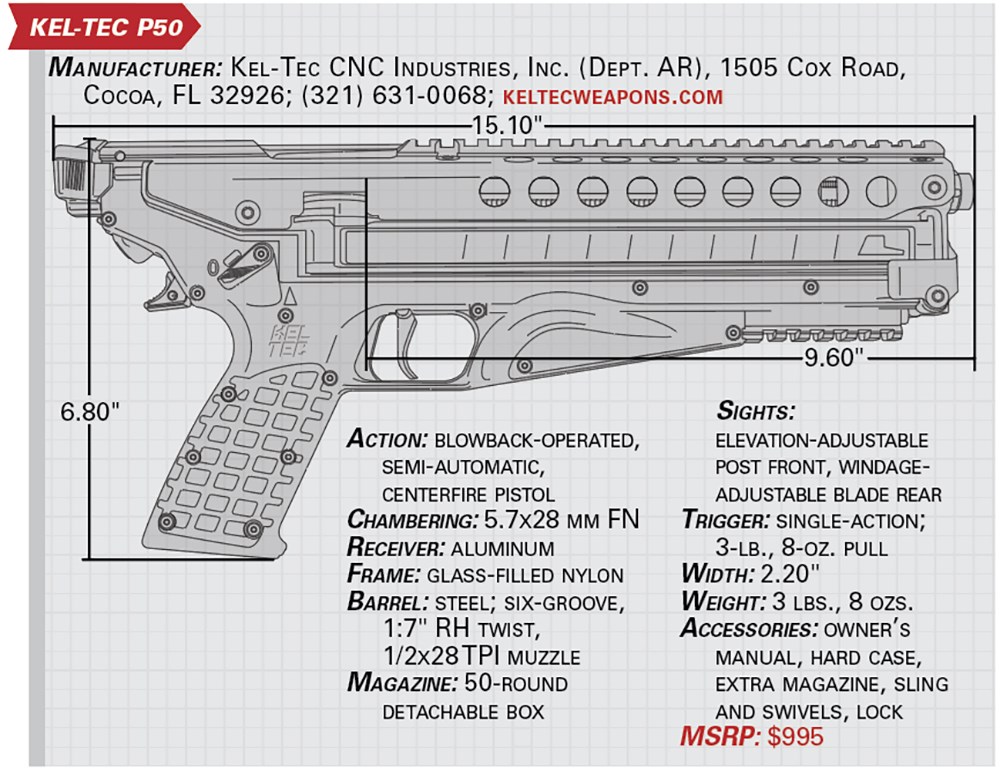 The Original Ruger Hawkeye: A Handgun That Didn't Fly