While word of a new pistol from Kimber started circulating some time back, the company managed to play its cards pretty close to its vest about what that pistol was going to be. Before I knew what it was myself, it was interesting to hear the speculations of friends who had a finger on the pulse of the handgun market.

With Kimber, of course, all the safe and conservative bets were on yet another iteration riffing off of the 1911 design. Only slightly less probable was some sort of expansion on the manufacturer’s recent foray into the revolver marketplace. A couple of guesses, from the sort of people who like drawing to inside straights and other such gambles, were that Kimber was going to try and stick a toe into the duty-size striker-fired market, either with an in-house design or by acquiring a captive import.

Literally nobody in my informal pool put their chips on the square that actually hit.

Tritium-enhanced sights supplement the installed MRDS or user-chosen MRDS, depending on the model selected.

With the new R7 Mako, Kimber is pushing into the most competitive sector of the private citizen pistol marketplace right now: The maximum-capacity, minimum-size 9 mm CCW blaster.

Super-slim single-stack nines are passé these days; they’re 2015’s news. As it happened, SIG Sauer was late to that game and so decided to start its own double-stack micro-nine party with the P365. This forced return salvos from Springfield Armory and Glock in the form of the Hellcat and G43X and most recently from Smith & Wesson with the Shield Plus and Taurus with its GX4.

Now into this crowded field jumps Kimber with its shark-themed offering. Rumor control says the rough design of the pistol could have been launched a year or two ago, but Kimber held off, polishing and refining and ensuring reliability, unwilling to get egg on its face for an unreliable carry-oriented pistol.

Did the company’s effort pay off? Let’s kick the tires and find out. 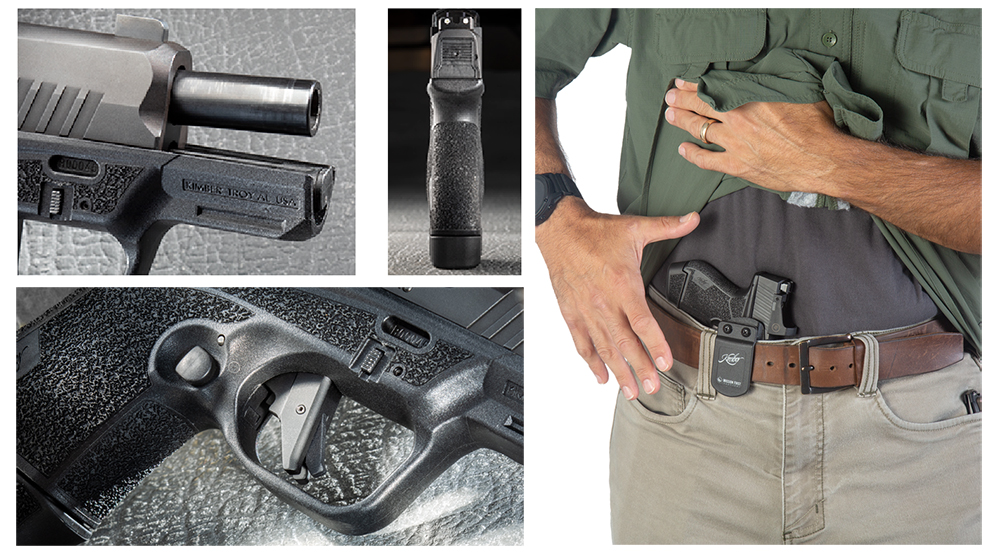 Though stubby, the barrel generated good velocity and decent accuracy • Given its capacity, the Mako is remarkably slender • The safety-bladed Performance Carry Trigger is flat-faced, as is the trend these days • Ideal for appendix carry, the R7 is a solid EDC pistol.

The pistol showed up in the same black plastic case as any other Kimber. Pop the lid open and the Mako takes up surprisingly little space in there. There’s room in the foam lining for the pistol and both magazines to have their own little cutouts. You could fit a third by sticking it in the mag well.

The night sights are of the three-dot, tritium-illuminated variety and the front has a high-visibility orange circle encircling the tritium lamp. Since the MRDS is mounted directly to the slide without an adaptor plate, the sights co-witness with the dot without being tall, suppressor-height units (at least they should be; more on this later). The rear- sight blade has a reverse bevel on the front so that if you’re running the pistol without a dot, you can more easily use it to cycle the slide one handed on a belt or holster. If you have the dot on the gun, you can just use the MRDS sight housing for this chore.

The slide has bevels at the nose to aid in fumble-free holstering and angled bevels along the sides running from the ejection port forward to the muzzle, reminiscent of current polymer SIG Sauers. There are seven angled cocking serrations at the rear that are a lot grippier than they look, and five matching ones up front. Forward cocking serrations on a pistol with a sub-3.5-inch barrel seem a little superfluous, but nobody asked me.

The slide has a couple notable features that differentiate it from other pistols in the class. For starters, the ejection port doesn’t wrap around the top of the pistol. Supposedly this is because the pistol was intended to work with slide-mounted optics from the jump off, and ensuring that spent brass and firing residue vented out the side rather than upward would help protect the lens of the optic from fouling.

Instead of locking up via a squared shoulder on the chamber hood mating with the front edge of the ejection port, the chamber end of the Mako’s barrel sports a square locking lug that mates with a matching mortise on the underside of the slide. 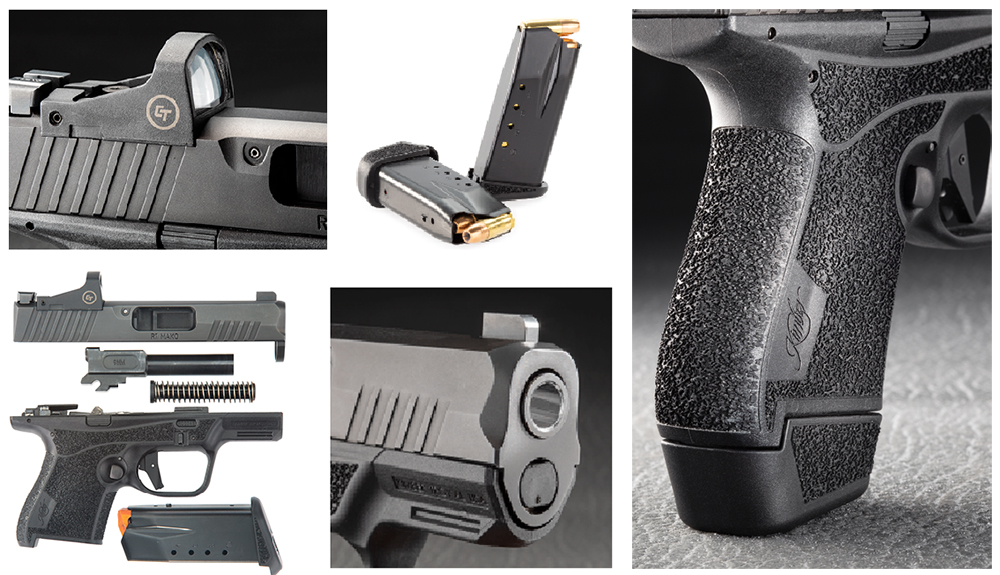 The CTS-1500 came installed on the pistol but, disappointingly, had not been co-witnessed to the irons at the factory • Both a flush-fit and an extended magazine come with the R7, the latter offering pinky support • Well-bevelled, the front face of the slide makes reholstering fairly easy • The wraparound stippling of the grip frame provides good purchase, while the magazine extension improves ergonomics somewhat • Takedown of the cleared pistol requires both a trigger pull and a willingness to read the owner’s manual.

The other noticeable difference between the Mako’s slide and its direct competitors is that there’s no visible external extractor. There’s a roll pin running across the slide immediately abaft the ejection port. This secures a separate breechblock inside the slide, and the pivoting internal extractor is secured to this breechblock by its own axle pin. What this all means to the end user is that this pistol isn’t going to be detail-stripped in five minutes on your desktop with nothing but a punch, but that applies to lots of other handguns, too.

The slide’s not the only place the Mako sports differences from more commonplace competition. For instance, there is a familiar pull-down slide takedown catch on the frame above and in front of the trigger guard, just like a Glock. But if one were to drop the magazine, clear the pistol, and try to take down the pistol without first reading the instruction manual, one might be a little surprised when the slide doesn’t slide forward off the frame just like a Glock. Ahem. Allegedly that would happen, that is, if one were to try it before reading the manual. Cough.

Instead, the instruction manual notes that to fieldstrip the Mako, the firearm should be cleared and the mag removed, the slide retracted about a quarter inch, then the takedown catch should be pulled down, the trigger pulled and the slide run slightly forward and lifted straight up off the frame. It’s a lot less Glock-y in there than it might appear at first glance.

Forward of the trigger guard, the dustcover sports some proprietary grooves, for future dedicated accessories, but there’s no room for a normal Picatinny rail for universal lights or lasers. The trigger guard is slightly rounded and roomy enough for adult trigger fingers, but it’s not intended for bulky winter gloves. This is a micro-compact carry gun and size is at a premium.

The frame is well textured and offers plenty of friction, even for sweaty or sunscreen-slick paws. Probably the closest comparison would be the texture on the M2.0 version of Smith’s M&P line. There’s a slight palm swell on both sides of the Mako’s grip to assist in control, and the grip works better than most two-fingered types. With the extended magazine allowing for three fingers on the gun, though, the pistol is more comfortable and quite controllable. 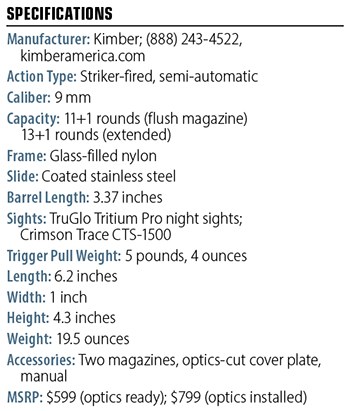 The slide release is ambidextrous and consists of turned-down sheet-metal tabs on each side, easily reached by a thumb and protected from accidental actuation by a sort of fairing-like swell in the frame fore and aft. Similarly, the magazine release is ambidextrous and the domed release button on either side is set in a dished-out recess, also to prevent inadvertent actuation. At no point during the test did I inadvertently engage either the slide catch or mag release, which is not a given with every ambi-control set I’ve previously used.

Much is made of the Mako being only an inch thick, which is skinny for a double-stack nine, but this is a slight fudge. Measure across the palm swells or the takedown levers and you’ll add a bare couple tenths to that thickness. Still, it’s plenty skinny.

This brings us to the trigger. Given Kimber’s long-cultivated premium market niche, this is where its offering is going to get graded the harshest. After several hundred rounds, I’d give the test pistol a solid B on this score. The trigger is the currently stylish straight-but-with-a-little-hook-at-the-bottom shape. It’s not truly flat-faced, but slightly rounded on the edges. It has the common tab safety to prevent against inertial discharges if the pistol lands on the rear of the slide from a height. The tab is unobtrusive when firing, and was not a problem throughout my 200-plus-round marathon range session.

The trigger takeup is light and the trigger on the test gun breaks at 5 to 5.25 pounds, according to my RCBS trigger gauge. Further, the striker release happens when the trigger face is perpendicular to the frame, just as it ideally should.

“But Tamara,” you say, “All this sounds great for an out-of-the-box trigger on a striker-fired gun! Why is it a B and not an A?” Because the break and reset have a certain amount of vagueness to them. This isn’t really that big of a deal outside of slow-fire accuracy work, but it’s worth noting.

It’s also worth noting that, vagueness and all, even shooting casually off a bench with fogged dark goggles indoors, the Mako posted respectable numbers for 15-yard accuracy. Most five-shot groups hovered at 2 inches and a few ducked smaller than that number. We’ll credit the dot and the reasonably light pull for that. The R7 was an easy gun to shoot well.

Both magazines, the 11-round flush mag and the 13-round ’stendo, functioned without a hiccup over the 500-round, slightly abbreviated test (I hate writing up a test on a gun with less than a thousand rounds, but welcome to 2021. It’s basically 2020 v2.0 up in here.) Weirdly, both magazines only had witness holes reading up to 10. The only way of discovering their true capacity would be to stuff rounds into them until you couldn’t—or, you know, that instruction-manual-reading thing.

The single biggest complaint I had with the pistol was that the red dot wasn’t zeroed to the irons out of the box, and if it were my pistol, that’s a problem that would take about 15 or 20 minutes on the range to fix. The dot on the gun hit low and left relative to the irons. It was only a couple inches on an indoor range, but on 50-yard A/B steel I could hit at will with the irons, yet using the dot without a silly hold off resulted in dust splashes left of the steel. Hopefully, all dual-sight-equipped pistols will come cowitnessed in the near future.

I will be absolutely honest here: When I first popped open the case and looked at this pistol, I was primed to dislike it. Over the course of a total of half a case of ammo, it has earned my grudging respect. It’s been reliable, easy to shoot well and it’s small and light. The price is hardly out of line with the other name-brand offerings in the market niche, especially in the optics-included version.

Whether or not the R7 Mako is a success at this point is going to be determined by how well the market warms to a high-value, increased-capacity, high-tech pocket nine from a company known best for catering to a more “walnut and steel” clientele. 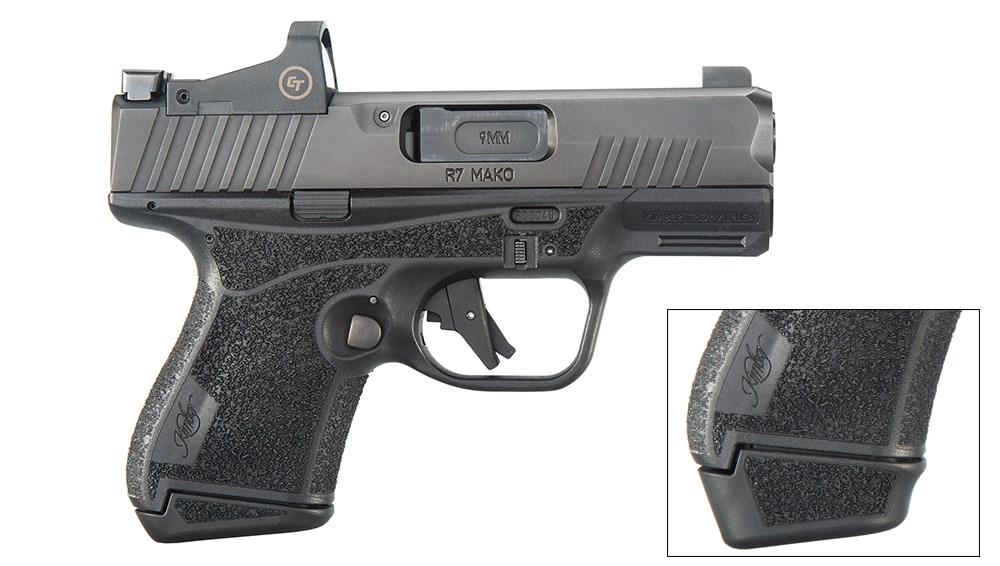