One type of handgun that seems to be creeping further and further into the niche category is the mid-size, double-action revolver chambered for rimfire cartridges. This is a shame, since they are so fun to shoot. That’s why I was glad to see that Armscor added rimfire options to the the Czechoslovakian Alfa Proj double-action revolver series in its Rock Island Armory catalog. In fact, the company offers an often-elusive .22 WMR (more commonly known as .22 Mag.) option in addition to .22 LR models. Dubbed the AL22M, this .22 Magnum is available in either blued or stainless steel finishes with 4″ barrels. I don’t get to spend nearly as much time at the shooting range with rimfire magnums these days as I’d like to, so I jumped at the chance to take the AL22M out for a spin. 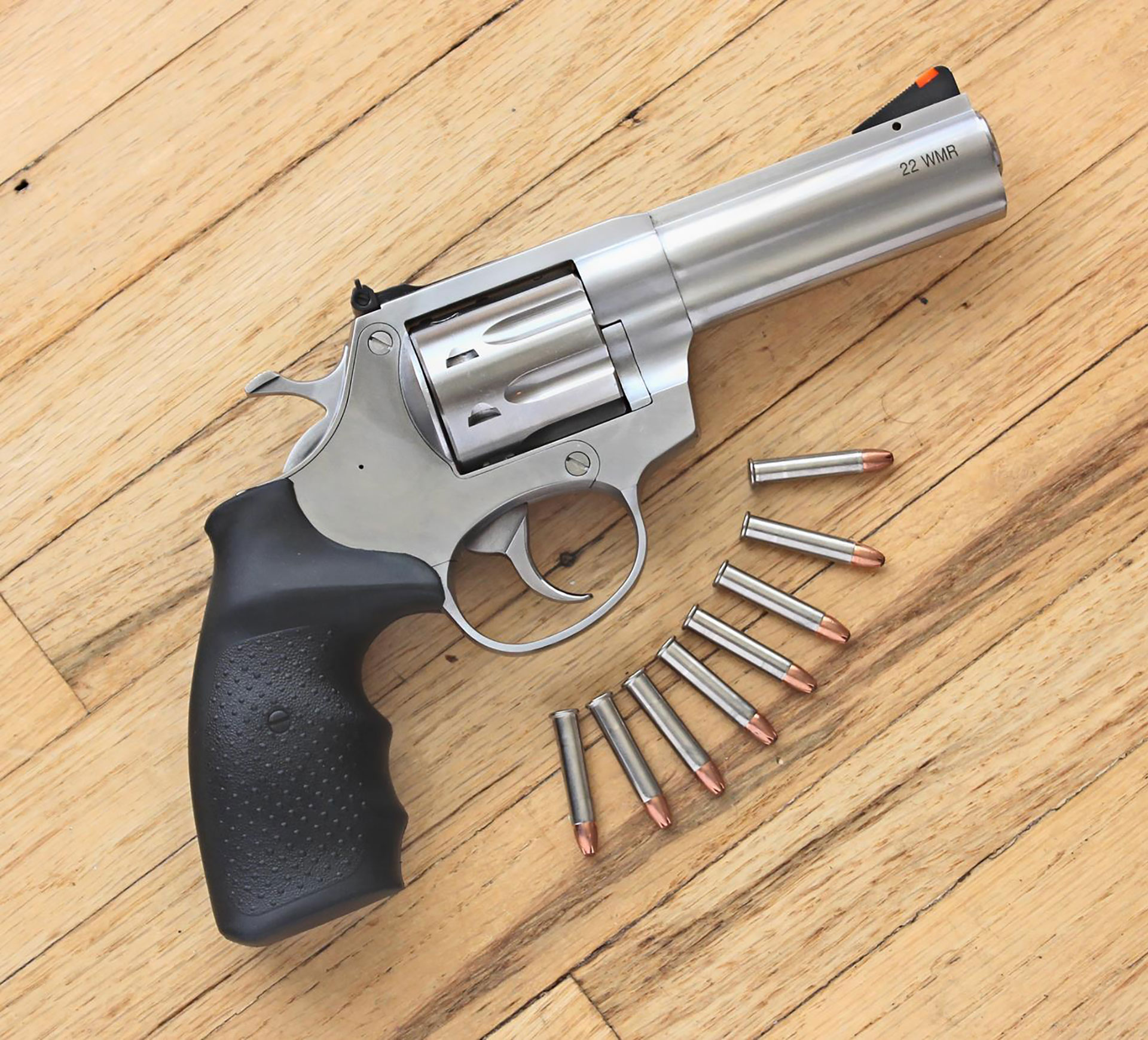 The Alpha Proj revolver blends design influences from a variety of models.

The AL22M is a double-action revolver that borrows design influences from a variety of well-known revolver makers, including Charter Arms, Colt, Smith & Wesson and Ruger. But the company does throw in a few touches not found on other manufacturers’ models. These revolvers may sound a bit like ‘Frankenguns’ but the elements come together nicely to give them a clean, classic revolver profile.

This rimfire is built using the same mid-size frame and materials as the Alfa Proj .357 Magnum revolvers. Sized for .38-cal. ammunition, and wholly constructed of stainless steel, chambering this revolver for .22-cal. ammunition is the definition of a rimfire wheel gun that’s built to last. Weighing in at 39.3 ozs., unloaded, it keeps felt recoil to a mild, hint-of-a-kick levels. 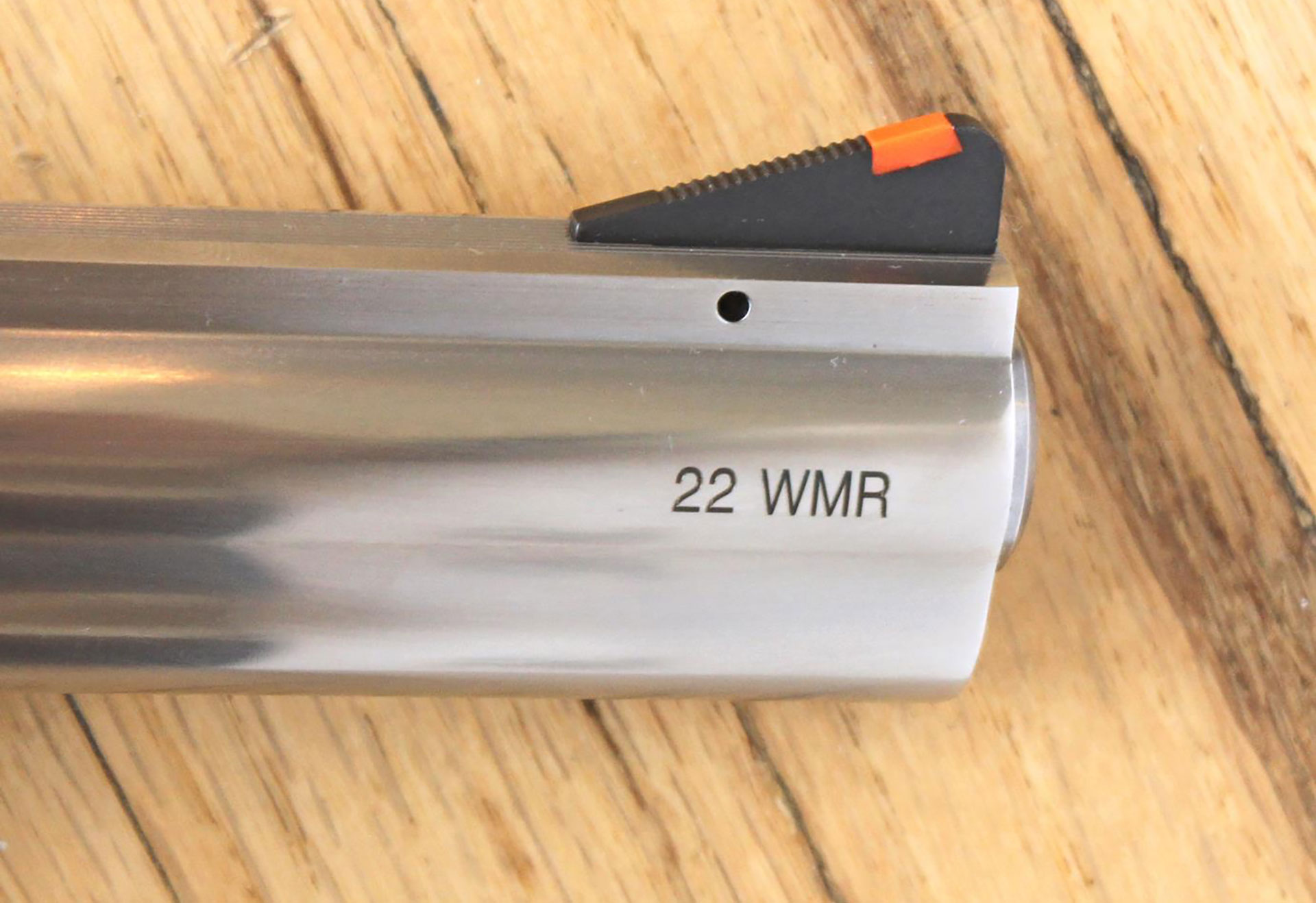 The front sight is fitted with a orange polymer insert for improved visibility.

The square profile of the top of the barrel and frame look to be influenced by Colt designs while the system is a bit more Smith & Wesson in nature. The front sight is a pinned, serrated ramp with a bright orange polymer insert for improved visibility. The square notch rear sight has a pair of adjustment screws for height and windage. The 4″ barrel has a full-length under lug which shrouds the ejector rod. Nothing about the barrel’s profile is changed from that of the .357 Mag. version. They simply milled a smaller bore for .22 Mag. ammunition.

With so much metal to work with inside of the cylinder, the AL22M’s ammunition capacity has been bumped up from the traditional six to eight rounds with additional cylinder flutes to match. Each of the chambers is counter bored, or recessed, which means cartridge case rims sit flush with the rear of the cylinder. The cylinder rotates counterclockwise and swings out easily to the left side of the frame when released. 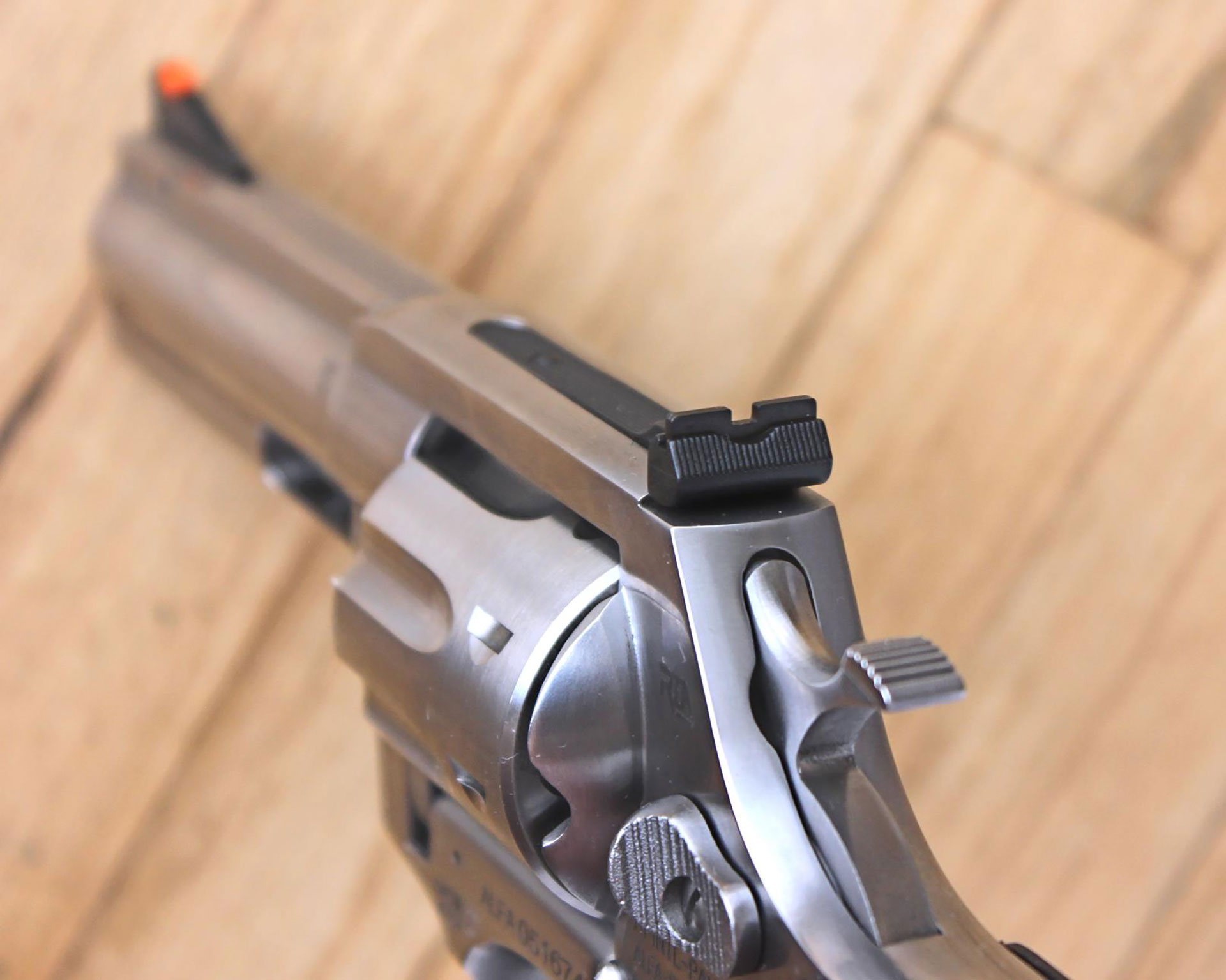 The rear sight is fully adjustable for height and windage.

The cylinder of the gun tested spun freely in the open position. The cylinder crane, sometimes called the yoke, is set into the frame Charter Arms style. The smooth ejector rod is long enough to press spent cartridges about 80 percent of the way out of the cylinder but does not clear them completely. In order to ensure the cases drop out properly it helps to tip the muzzle up (in a safe direction) when cycling the ejector.

The exposed hammer has a profile which is unique to the Alpha Proj design. It is relatively long and slim with a grooved spur for improved purchase when manually cocking the gun. The coiled spring assembly that supports the hammer bears a striking resemblance to those used in Ruger’s GP100 series of double-action revolvers. On the left side of the frame, just behind the cylinder, is the rounded and grooved cylinder release. It is pressed forward, Smith & Wesson style, to open the cylinder for loading. On the right side of the frame is a plate secured by a pair of standard screws. This can be removed to provide access to the interior of the gun for cleaning and repairs. 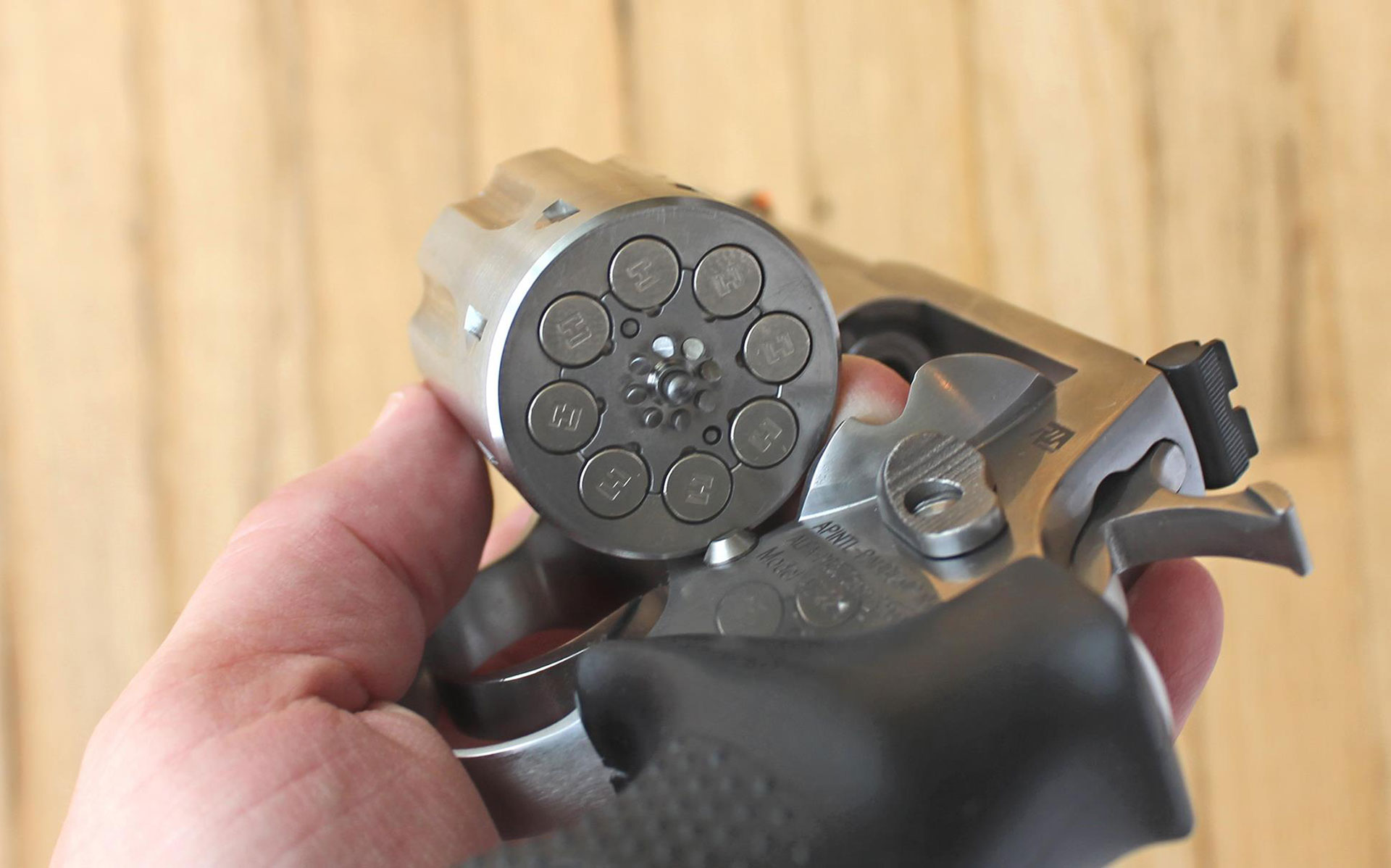 They cylinder holds eight rounds instead of six.

The trigger guard has a traditional rounded profile. Inside is a curved, smooth-faced stainless steel trigger. It’s not unusual for the double-action trigger pull of rimfire revolvers to be on the heavy side. The hammers need to give the rimfire primers an authoritative thump to ensure proper ignition. The AL22M’s double-action trigger weighed in somewhere over 12 lbs., which is the maximum pull weight my Lyman’s digital trigger gauge can measure. But it had a clean, well polished feel that was free of hang-ups or stacking.  The single-action trigger pull was a bit of a surprise in that it was better than I expected it to be. With the hammer manually cocked, the trigger pull dropped to 3 lbs., 11 oz. with a short, clean break which is a great fit for target shooting or small game hunting. 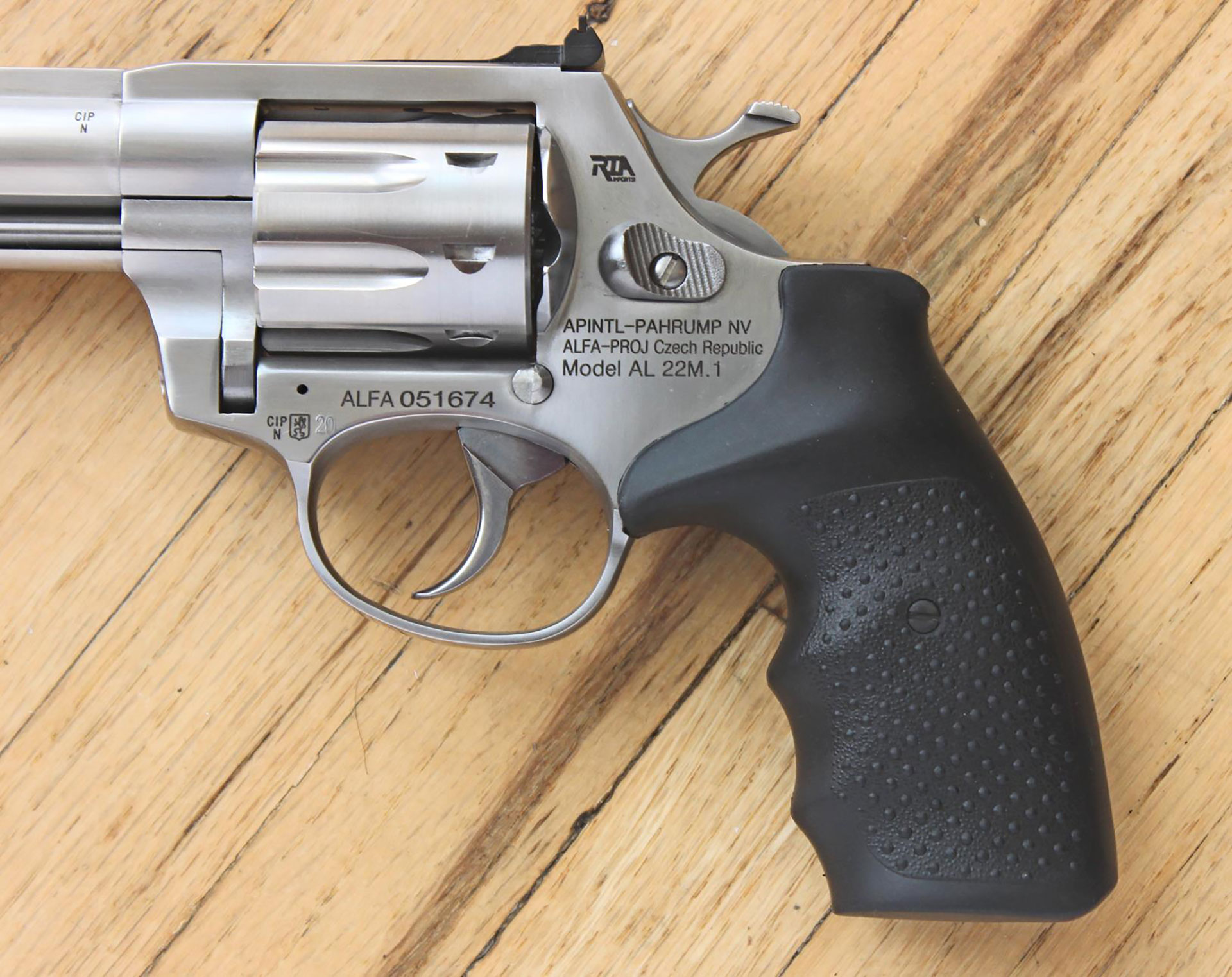 The pebbled rubber grip is a comfortable to hold and the controls cycle smoothly.

The revolver’s square-butt grip frame is comfortably couched inside a two-piece rubber grip. Although some of the double-action revolver grips from the good old days seemed to be sized for grizzly bear paws, this revolvers grip has been contoured to fit a variety of hand shapes, including smaller ones. The grip has finger grooves, pebbled texturing and it encases the steel backstrap of the grip frame.

It also has a curved extension that fills the space between the receiver and the trigger guard. It’s a comfortable grip to work with, especially with a softer shooting rimfire cartridge. As a medium frame, all-steel revolver, the AL22M has some heft to it, which is a positive quality for target shooting and nabbing small game. This all lends to it being enjoyable to shoot. 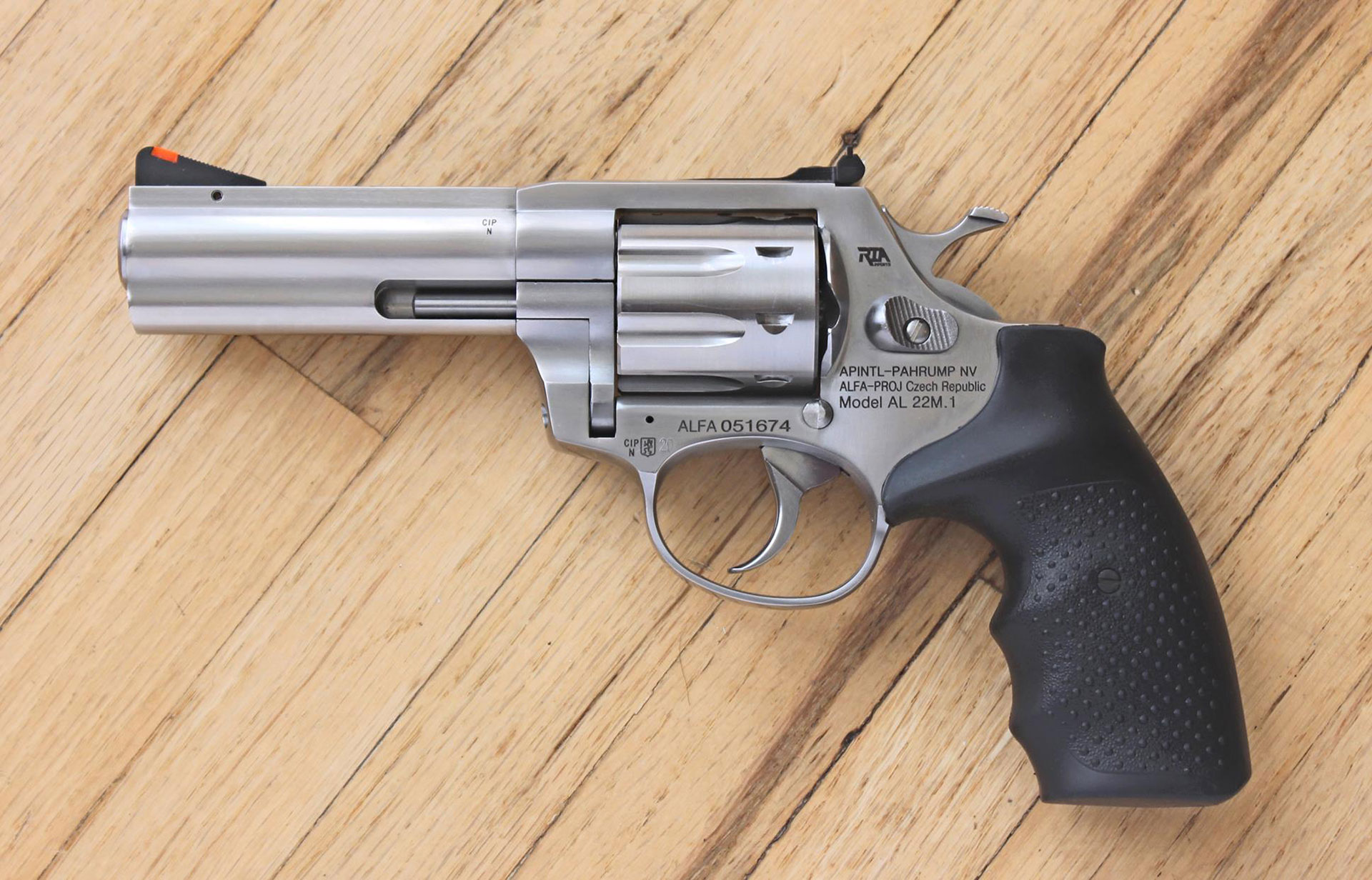 The all-stainless steel construction of the AL22M gives it a stabilizing heft.

My experience has been that rimfire primer failures are much less frequent with .22 Mag. ammunition than .22 LR, especially the bulk box .22 LR practice and plinking loads. This revolver proved to be utterly reliable with all of the ammunition fired in the course of testing. There were no hitches, hang-ups or problems of any kind, just smooth going trigger time. Formal bench rested 25-yard accuracy testing yielded comparable five-shot group averages across the three loads tested. 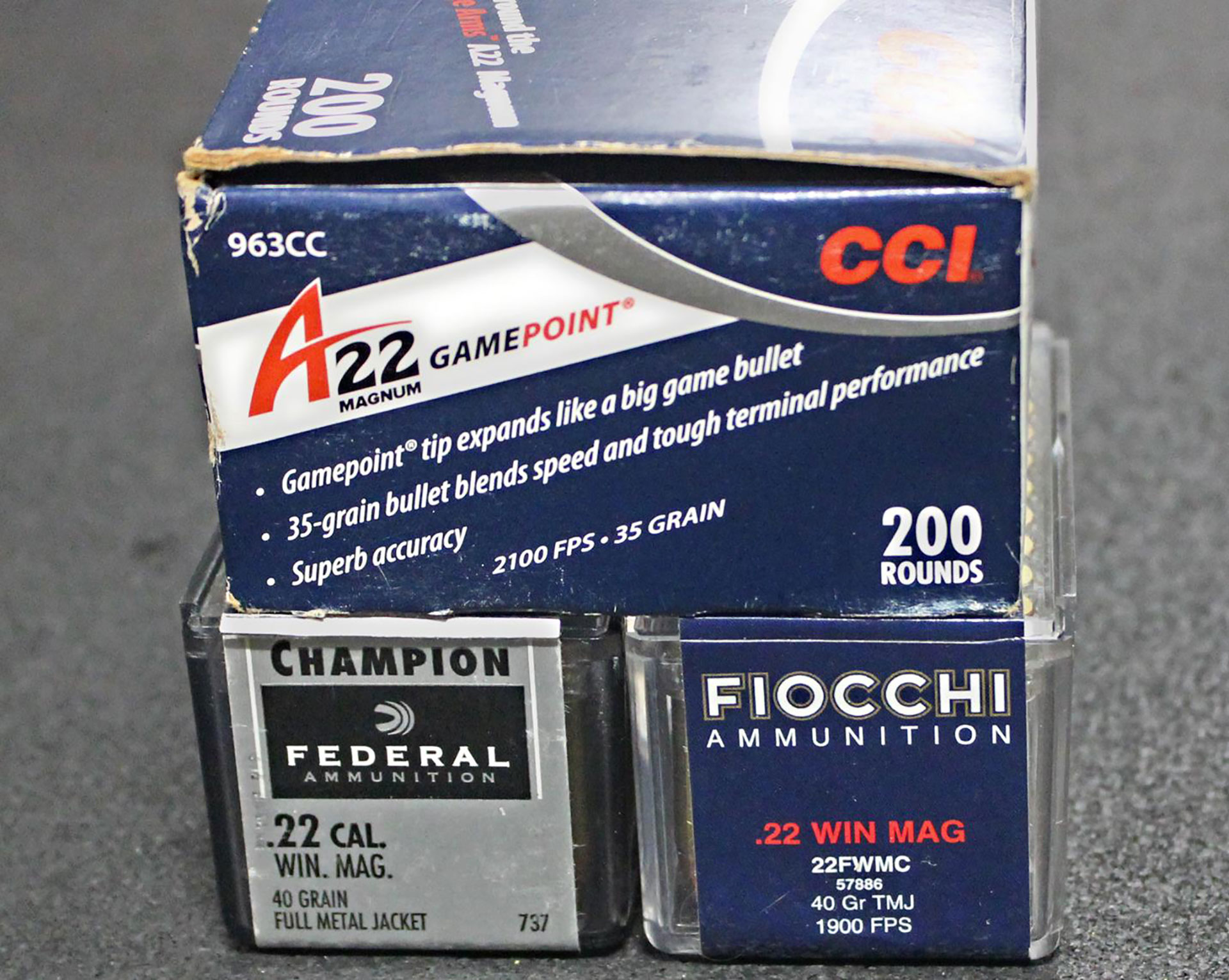 Most of the .22 Mag. loads currently available are designed for small game and varmint hunting. A few defense-grade hollow points designed specifically for revolvers are available.

However, the LabRadar chronograph results told a different story. Usually, bullet velocities are fairly consistent as well. But in this case they varied more than usual. Typical Standard Deviation numbers are usually in the 10s or 20s. In this case, they ranged from 69 to 113. This is because, despite its small size, .22 Mag. is a rifle cartridge and it’s packed with powders designed for closed chambers and barrels 16″ or longer. Firing them from a 4″ revolver affects the powder burn rates, which in turn, reduces bullet velocities. So much like a .22 LR handgun, it will take some testing to find which .22 Mag. loads are the most consistent in your revolver. 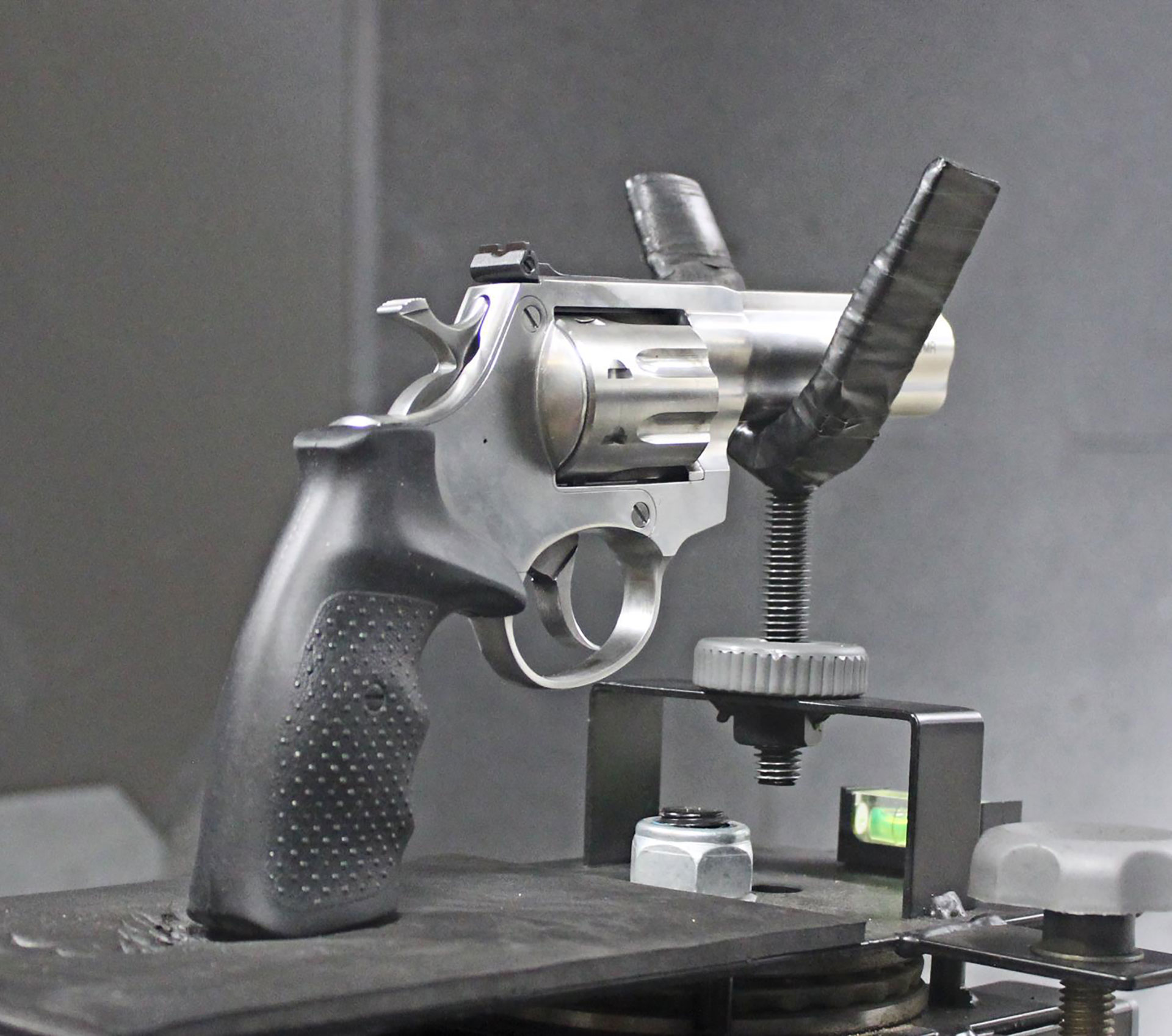 The almost non-existent levels of felt recoil produced by the AL22M make it comfortable to work with on or off the bench.

Since I first handled the Alpha Proj revolvers at a trade show a few years ago, I’ve been looking for an opportunity to work with them. It’s a well-made revolver series that is a welcome addition to the Rock Island Armory catalog. The AL22M proved to be a reliable and likeable revolver that was a pleasure to work with. Although the eight-shot .22 Mag. model may be a bit too far off the beaten path for some shooting sports enthusiasts, the Alfa Proj series of AL double-action revolvers deserves a closer look. The revolvers are well made, smooth operators with real-world prices that fit in between the premium models and the budget guns. If your tastes lean towards centerfire models instead of rimfire, the AL series is also available chambered in 9 mm Luger and .357 Mag. or .38 Spl., with 2″ or 4″ barrels.

Democrats Use Nazi Policy To Get Registration, Then Confiscation, Of Your Guns 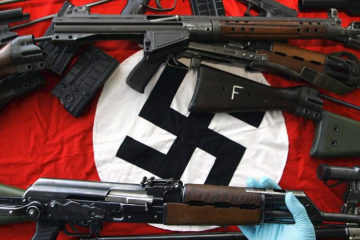