This year, Taurus is expanding the G3 line up with the new sub-compact G3c. The company didn’t settle for just making the pistol smaller; it incorporated improvements to the slide, sights and controls. 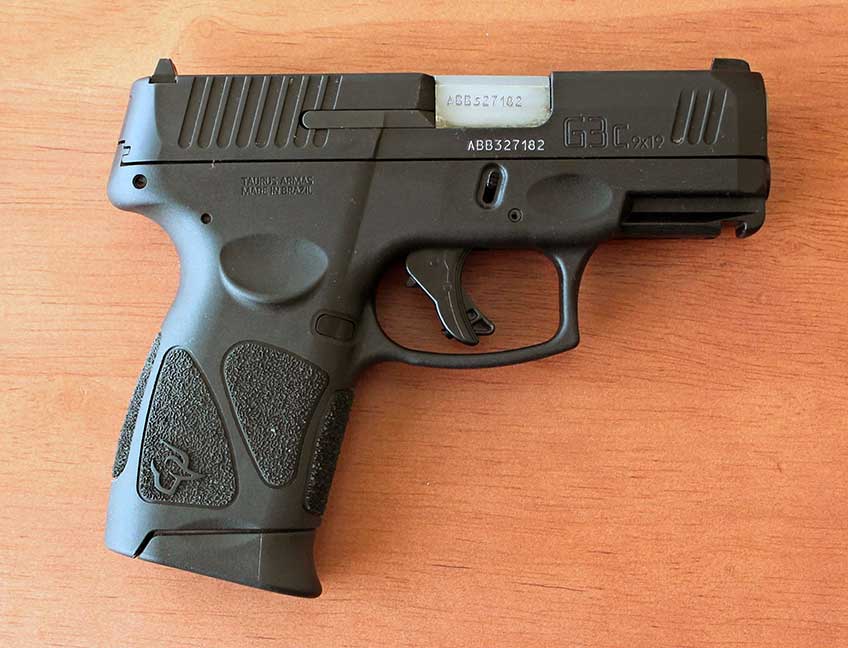 Manufactured in Brazil, the G3c is a polymer-frame, striker-fired semi-auto that employs a short recoil, locked-breech action. With a design that is clearly based on its predecessor, the G2c, this pistol offers a standard 9 mm 12+1 ammunition capacity. With external dimensions comparable to those of the Glock G26, it’s easy to find suitable holsters for comfortable concealment, like the DeSantis Inner Piece 2.0 inside-the-waistband holster.

The carbon-steel slide is treated with a Tenifer finish, which has a proven history of scratch, wear and corrosion resistance. The deep front cut outs of the G2 style slide have been replaced with a squared-off profile that allows for canted cocking serrations at the front and rear. This is a plus for those who prefer to manipulate the slide from the front end. The slide’s nose is beveled for easier re-holstering, while the back end is nicely rounded to match the contours of the frame.

The polymer sights have been replaced with an all-steel sight system. The white-dot front sight is paired with a serrated square notch rear sight, which dovetails into the slide so as to be drift-adjustable. Taurus recognizes that many concealed-carry practitioners are swapping out factory iron sights for fiber optics or night sights. To make this process easier for customers, the G3’s dovetail and front sight port are compatible with sight upgrades made for Glock pistols. 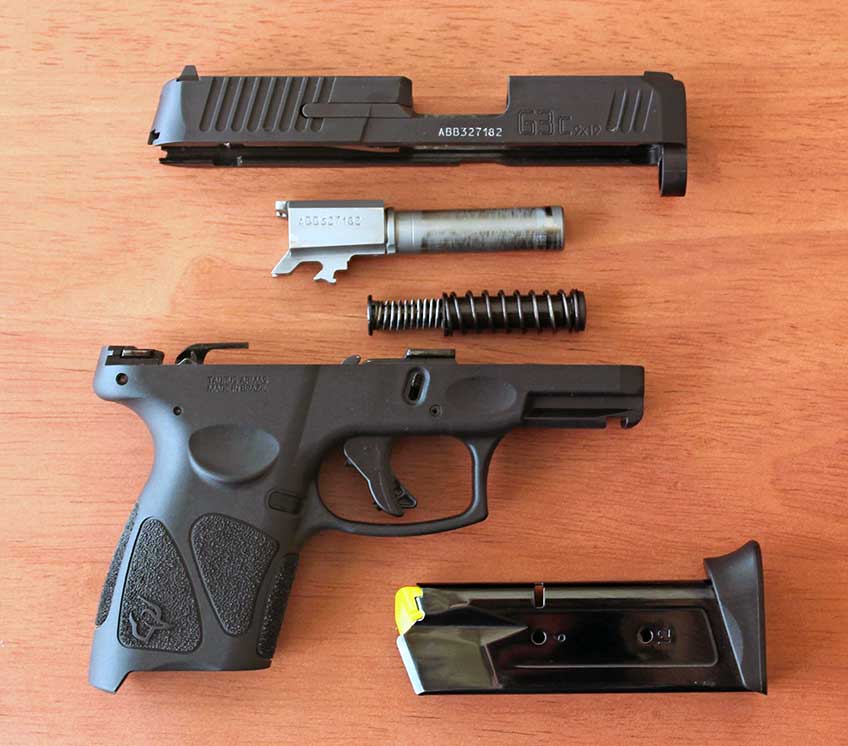 The bore of the 3.2″ long stainless steel barrel features traditional 6-groove rifling that allows for the use of cast lead bullets. The top of the chamber has a witness hole that takes the place of the mechanical chamber indicator found on the G2c. It allows the state of the chamber to be verified without pressing open the action. The feed ramp is polished mirror-smooth for reliable feeding.

The two-piece, dual spring recoil assembly uses all-steel supports instead of a mix of steel and polymer, like some models. It provides plenty of support while allowing the slide to be manually cycled with ease. Although the slide is not quite as light as the Smith & Wesson M&P Shield EZ 9 mm (I had one on hand for comparison), it comes close.

The slide rides on four short rails which project from steel front and rear support blocks that are secured to the frame with roll pins. The pistol’s serial number can be found in no less than four locations. It’s stamped to the front support block and can be seen through a left side cutout in the polymer frame. 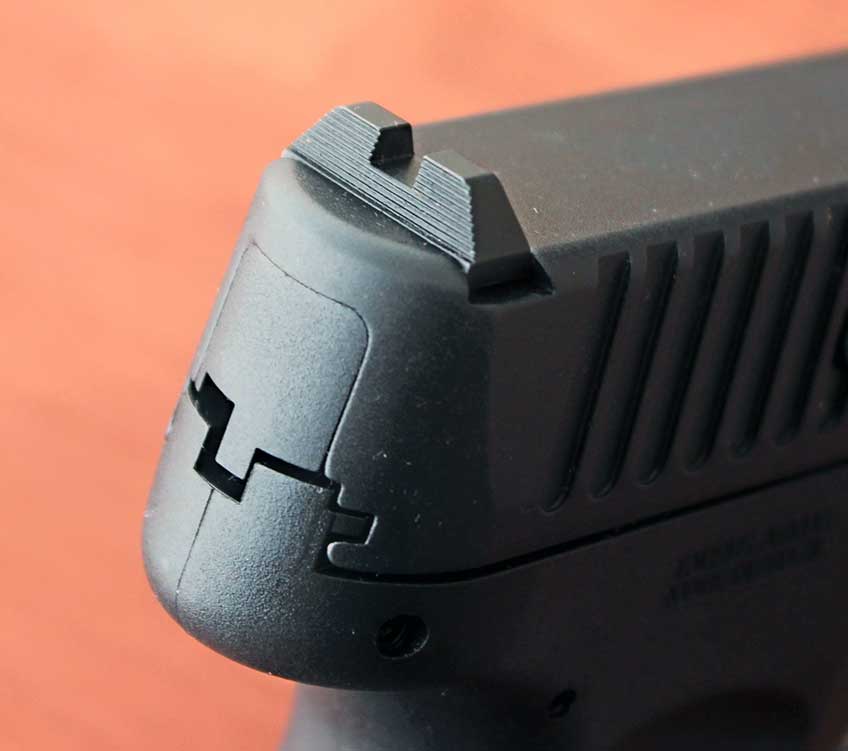 Another is located in a metal plate molded into the dust cover with the remaining two found on the barrel and slide next to the ejection port. The external controls, including the takedown lever, slide stop, magazine release button and the thumb safety are all metallic instead of polymer. Like the slide, these controls now have an upgraded finish. They’ve been treated with black Teflon, which is not only corrosion-resistant but also increases lubricity for smoother control operations.

The left-side thumb safety lever has an unobtrusive low profile that won’t dig into your hip when holstered. It swings up into the Safe position and down, exposing a red dot on the slide, to fire. It shifts positions using a modest amount of pressure with distinctive clicks when it locks into either position. The magazine release has a serrated surface for improved purchase and it can be reversed for left-handed operation.

Like the slide, all of the frames edges have been rounded for a sleek appearance and comfortable feel. The dust cover sports a molded in 1.25″ long, 1-slot MIL-STD-1913 accessory rail. Just behind the rail are left and right side indentations (Taurus calls them Memory Pads) that act as touch points for the tip of the trigger finger when resting against the frame. The trigger guard is curved and rounded along the front edge, to serve as a support hand finger rest, and undercut where it meets the grip for added comfort. 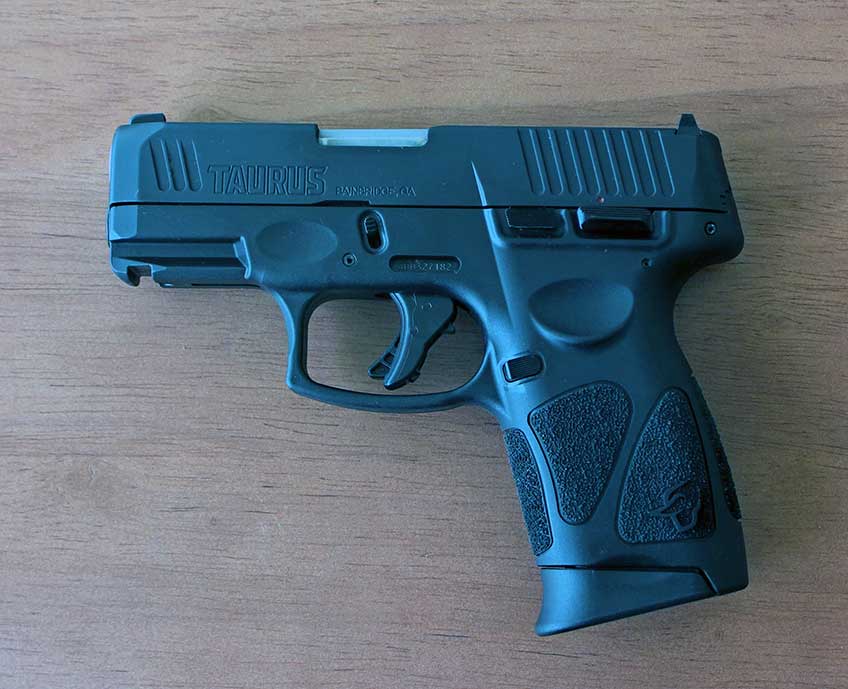 One of the reasons striker fired semi-autos have become so popular is a consistent trigger pull. But not all striker triggers are created equal. Some have a mushy, indistinct feel. The G3 series was released with a new trigger system that feels like it belongs on a more expensive pistol. The face of the trigger is grooved and flattened with a wide integrated safety lever. It has a light 2-lb. take up with a firm stop before breaking cleanly with 4-lbs. 10-oz. of trigger pull.

The trigger comes to rest against the frame and only needs about a quarter inch release in order to reset. The result is a trigger that feels tuned instead of factory installed with a short reset that aids in quick follow-up shots. This pistol’s ignition system also provides second strike capability. This means that, should the firing pin strike a hard cartridge primer, the trigger can be pulled a second time to strike it again. This feature is not available on many striker-fired pistols.

Some striker fired pistols suffer from bulky or blocky feeling grips. Taurus went out of its way with the G3 grip frame to make sure it would be a comfortable fit for a variety of hand shapes. Although the G3c’s frame is shorter, the company was careful to preserve the positive grip characteristics of the larger version. 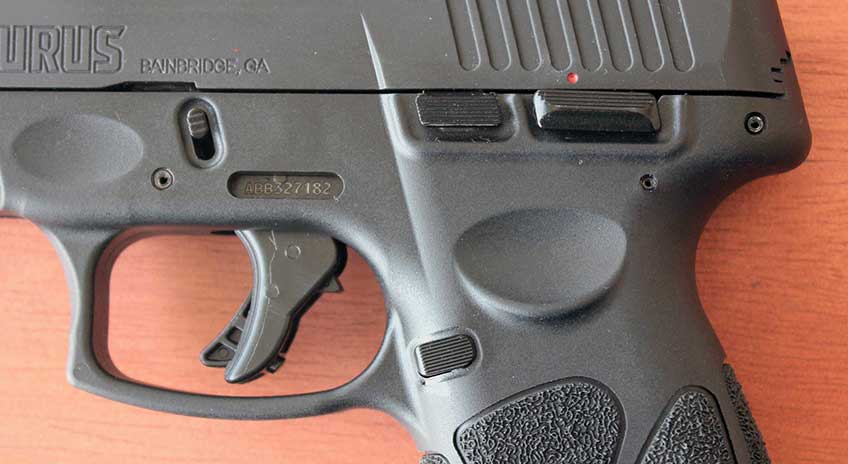 At the top of the grip, on both sides, are ridged depressions that act as thumb rests. The G3 does not have interchangeable backstraps, but I still found the grip to be a comfortable size and shape for my somewhat smaller hands. Some pistol grips feature a moderate texture applied to most of the surface area. But Taurus opted for an all-or-nothing approach. The touch points of the G3 grip are smooth, with the exception of six 1.50″ tall, molded in textured panels to provide added purchase on all four sides.

The texturing of these panels is aggressive, with rough-grit feel comparable to skateboard tape or sand paper, but it’s isolated to those points along the shooting hand palm and fingers where added control is most useful. The textured portions can feel abrasive during extended practice sessions at the shooting range. I chose to put on a shooting glove after a while during the range test. However, it provides plenty of purchase for less-than-ideal circumstances. In a defensive situation, we may be wearing gloves or our hands may be wet or cold. That’s when this kind of texturing is most useful.

The grip’s back strap extends down behind the base plate of the blued steel, double-stack magazine. This helps to protect the shooting hand from getting pinched during reloads and prevents the base plate from nibbling at the palm when the pistol recoils. The magazine well and polymer base plates of the 12-round magazines share matching dimples on both sides. 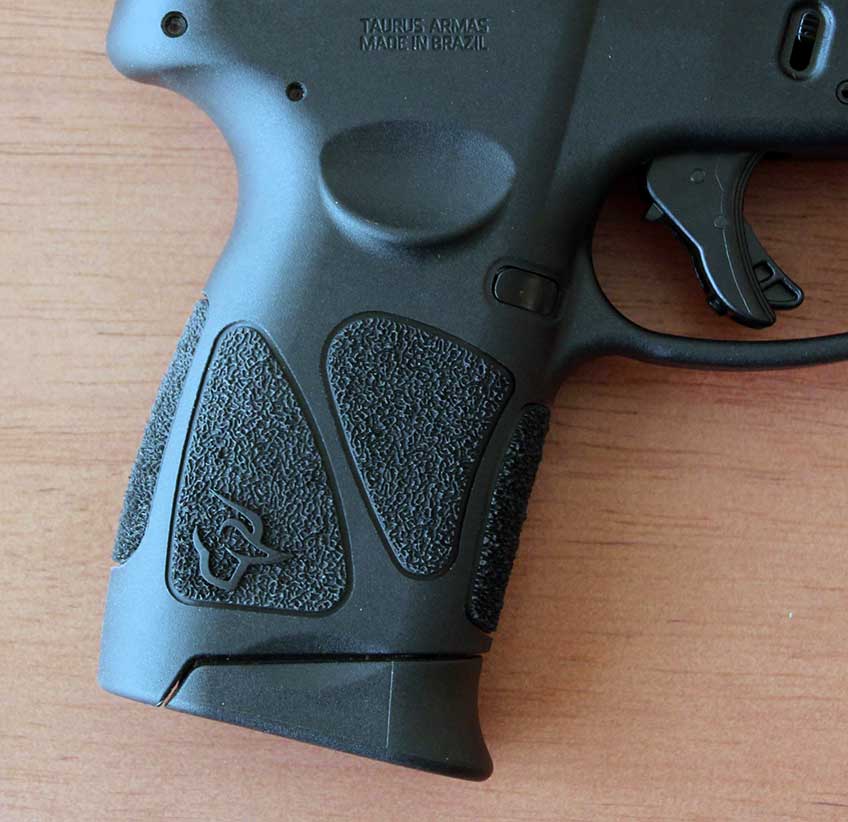 This provides for a better grip on the base plate should the magazine need to be manually stripped out of the grip due to fouling or other malfunction. The base plate is also flared along the front edge to provide a rest for the little finger. This pistol’s internal and external safeties include a manual safety lever, the trigger safety and a firing pin block. This model does not have a magazine safety. This means the pistol will fire if the trigger is pulled with the magazine removed.

Breaking down the G3c for routine cleaning follows a similar set of steps as other striker-fired pistols. 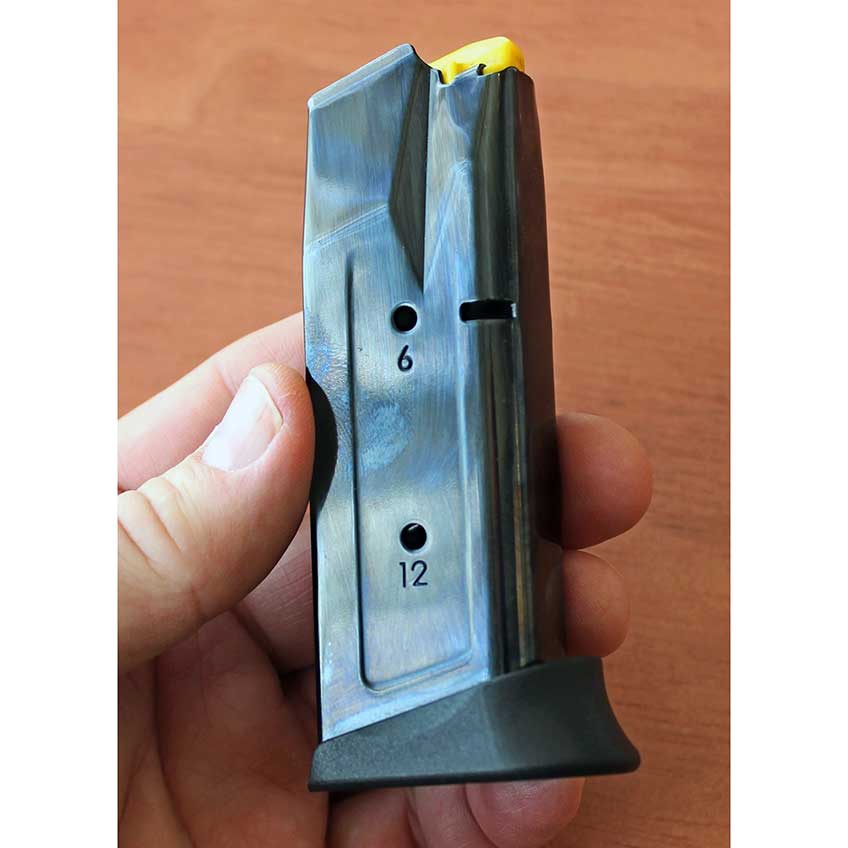 The production-grade G3 I worked with last year arrived in great shape. The overall fit and finish was top notch. The metal finishes were properly applied, the gun was clean inside and out and shipped without any of the scratches and blemishes that I’ve seen on some Taurus products in the past. The slide and frame were both well-made and free of machine or mold marks. The controls all worked smoothly and properly. Taurus has suffered from quality-control issues in the past, but I’m glad to report that the G3c was just as healthy of a specimen as the G3. In fact, both pistols exhibited the same clean, consistent 4-lbs. 10-oz. trigger pull.

At the shooting range, the G3c proved to be utterly reliable with all of the test ammunition fired, including practice-grade and premium defensive hollow point loads. The pistol was mechanically sound as well with the controls and all three magazines operating properly.

The magazine release is well-positioned to be easy to reach and the magazines dropped free from the grip when the release was pressed. Small 9 mm pistols like this one can produce snappy levels of felt recoil depending on the loads selected. The rounded, hand filling 3-finger grip and grip texturing makes this pistol more manageable than some. According to the owner’s manual, the G3c is safe to fire with SAAMI rated +P ammunition. 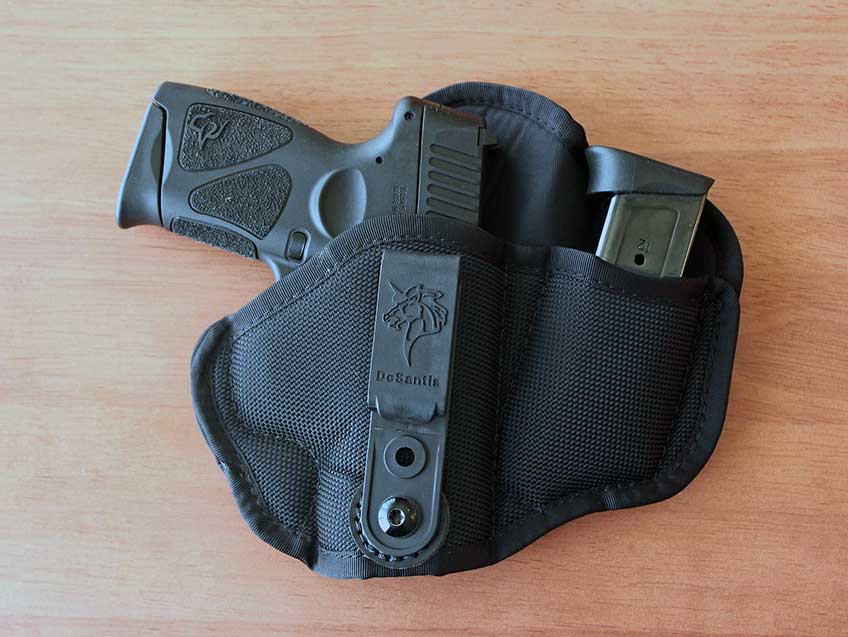 SIG Sauer’s 365 V-Crown 115-gr. jacketed hollow point round is designed for short barrel defensive pistols. The bullets launched at an average velocity of 1,084-fps. with a best group of 3.39″ and a group average of 3.47″.

Steinel Ammunition’s Subsonic Carry line includes a 124-gr. solid copper hollow point that traveled at   at 1,003 fps. It produced the tightest single group of 3.25″ and the best group average of 3.33″. 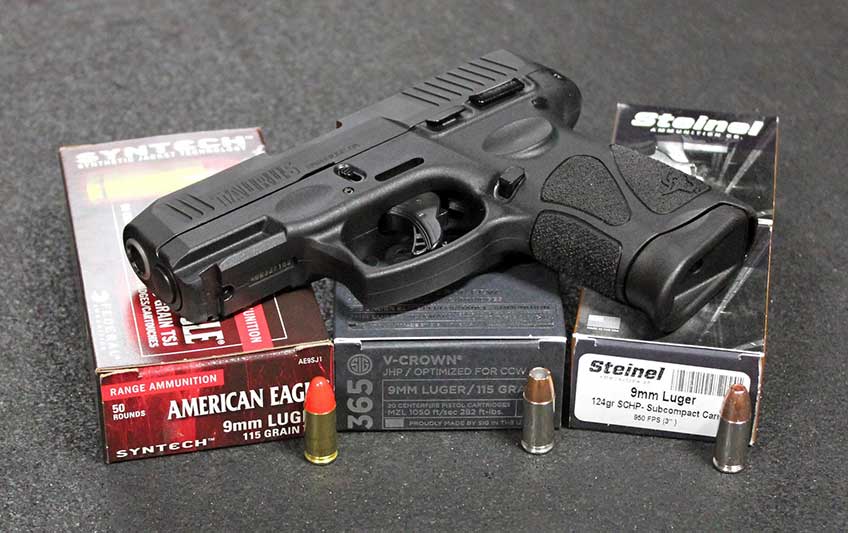 With the release of the new Taurus G3c, I was hoping to see the same level of commitment to consistent quality control, reliability and value that I found in the G3. But Taurus insisted on one-upping themselves by giving the slide a Tenifer finish, weatherproofing the controls and configuring the sight system to accept readily available Glock-type upgrades.

The factory trigger feels like an upgrade as well, thanks to its light take-up and short reset. The defensive accuracy is where it needs to be with group averages hovering around 3.5″ at 15-yards.

With these upgrades and a suggested retail price of $305.74, the G3c is well-positioned to compete with popular concealed carry 9 mm pistols that cost more while maintaining a budget friendly price point to fit most budgets. Currently shipping in an all-black finish, this pistol will be available in additional color options along with 15 and 17-round magazines.

Christians Taking Jesus’ Advice and Arming Up Next Sunday