October 1, 2022 Guns In The News
Home»US News»Since 2009, 92 Percent of Mass Shootings Have Occurred in Gun-Free Zones
US News

Since 2009, 92 Percent of Mass Shootings Have Occurred in Gun-Free Zones

The Crime Prevention Research Center (CPRC) recently released a report that indicates that since January of 2009 to July 2014 92% of all mass shootings in the US occurred in gun-free zones.

The CPRC report was released to combat the liars over at Everytown for Gun Safety, a Michael Bloomberg, communist gun grabbing organization. According to Everytown, who pushed a gun safety study claiming that only 14% of mass shootings took place in gun-free zones, 86% of mass shootings have occurred in places where guns are allowed.

In its presentation, the CPRC report, put out by John R. Lott, Jr. and Rebekah C. Riley, claim, “Everytown’s recent analysis of mass shootings is riddled with errors. Mistakes are made on the number of mass shootings as well as the extent of mental illness, the killers’ ages, and even where the attacks occurred. Those errors occurred because they did not do a complete news search on each case. They made simple accounting errors and included cases that did not fit their claimed criteria (4 or more shooting deaths). Also, their arbitrary definition of “assault weapons” seems chosen to obtain the results that fit their ideological agenda. Their numbers should not be relied on for any type of policy analysis.”

So, let’s be honest here, because clearly Everytown was not. They did not make errors. They made calculated deceptive claims. In the vernacular, they lied, and they know it.

According to the CPRC report, Everytown’s claims of 86% of mass shootings occurring outside of gun-free zones is because of their “inclusion of attacks in private homes” and “numerous errors in identifying whether citizens can defend themselves.”

Not only does Everytown’s report fail to identify cities that infringe on citizens’ rights to carry a gun, but they also fail to distinguish between citizens and police officers who carry guns.

“It may seem obvious that using assault weapons would result in far more victims than if other types of guns had been used,” reads the report. “After all, firearms such as the AR-15 and the AK-47 are ‘militarystyle weapons.’ But the key word is ‘style’—they are similar to military guns in their cosmetics, not in the way they operate. The guns covered by the original federal assault weapon ban were not the fully automatic machine guns used by the military, but semiautomatic versions of those guns.”

This is important because the call from gun grabbers pushes the fear of scary looking weapons, when the rest of us gun owners understand they’re really just “cool” looking. But here’s an important question, are there more fatalities when these kinds of guns are used? CPRC answers:

So, sticking to the actual definitions of what a mass shooting is (four or more injured or dead in a single shooting), CPRC takes the same data, but deals with it fairly and demonstrates that Everytown is pulling a Climate Change data fraud on the American people. In the same manner that Climate Change should be dismissed as being advanced by Communists, the same can be said of the anti-gun push by Bloomberg’s communist organization Everytown for Gun Safety.

Climate Change isn’t about the environment. It’s about money and control, and the same is true with the anti-gun movement as well.

In the end, it matters not what the numbers spell either way, as the restrictions on government over the rights of the citizens continues to remain in black and white in Article 2 of the Bill of Rights… “…the right of the people to keep and bear arms shall not be infringed.”

Since 2009, 92 Percent of Mass Shootings Have Occurred in Gun-Free Zones 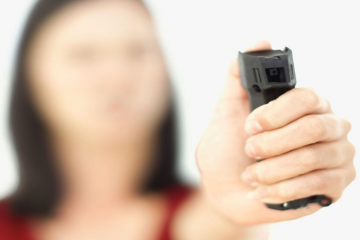