U.S.A. -(AmmoLand.com)- We start with a news report and this police report from Columbus Ohio.

It is one in the morning when a store clerk served customers at a small convenience store. Two more customers came into the store, only these customers were dressed in black, were wearing masks, and carrying guns. The robbers waved their guns at everyone near the counter and demanded the money from the cash register. The clerk was armed and shot both attackers. One fell to the ground while the second attacker shot back as he ran from the store. His shots wounded the store clerk and a bystander. The store clerk checked on the customers and then called 911.

EMTs transported the injured clerk and customer to a nearby hospital where they are treated and released. EMTs also transported the wounded robber to the hospital where he died. Police arrested the second armed robber when he sought medical attention. The police also arrested the 18-year-old woman who acted as lookout for the robbery. Both surviving suspects were charged with murder since their accomplice died during the commission of a felony.

There was a lot to do and very little time to do it when our defender faced two gunmen threatening his life and the life of his customers. There was no time to get a gun from the safe in the back office, but fortunately, our defender was armed. There wasn’t time to practice presenting your gun, but this store clerk recognized that he had a dangerous job and had practiced presentation of his concealed firearm. There wasn’t time to practice putting multiple shots on two or more targets. The defender shot both attackers. He also called 911 and remained at the scene to talk to police.

There are several things we can learn. The first is that criminals don’t fight fair. About half of aggravated assaults involve more than one attacker. That means we may face and have to defend ourselves from several threats. There may also be innocent bystanders at the scene. It is important for us to wait until the criminals are distracted and we have a clear shot before presenting our firearm. We want to move as we draw, and ideally move to cover that will protect us from return fire. Unfortunately, convenience stores contain a lot of glass cabinets and glass bottles. It isn’t clear if the injured clerk and customer were directly struck by a bullet, by a ricochet, or cut by shattered glass.

We might criticize the store clerk for not shooting more and stopping the threat. We were not there and there are good reasons to stop shooting. Many convenience stores have a glass wall at the front of the store and the clerk may have stopped shooting when the attackers ran to the front of the store. Good guys care where their bullets stop. Bad guys don’t care and will shoot wildly. You’d rather take a few stitches to sew up a cut from broken glass than wound an innocent person hundreds of yards away. The stitches will heal faster than the heartache.

There is a lot to do after the shooting stops. Take a breath. Determine if any attacker at the scene remains a threat. Decide if you have to secure their firearm. As you move about the store, don’t wave your firearm at innocent customers. Look for injured bystanders since they may have been cut by broken glass as they dove for the floor. Lock the doors, and call 911. Holster your firearm and provide emergency first aid for those who are seriously injured.

One valuable benefit of video surveillance systems is that they make your store a less inviting target for theft or robbery. Good video systems also provides evidence that you and your customers faced an immediate, lethal, and unavoidable threat that justified an armed defense. That can be invaluable.

The American Old West: How Hollywood Made It “Wild” to Make Money & Advance Gun Control 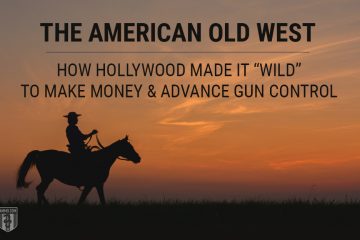