The Men And Guns Of D-Day: Juno & Gold Beach

While American forces landed on the westernmost beaches along the Normandy coastline on June 6, 1944, the British and Canadians landed on beaches to the east. The Canadians, in particular, were designated to land on a stretch of beach called “Juno,” situated between the British landing beaches of “Sword” and “Gold.” The 3rd Canadian Division was assigned the task of assaulting Juno Beach and, like the British forces on their flanks, pushing towards the city of Caen inland.

Also like their allies, the Canadians spent considerable time and effort in training for the landing in Scotland and across Great Britain. For D-Day, it was planned that the preliminary bombardment of offshore ships and the support of air power would soften up German defensive points. On the morning of June 6, bad weather delayed the landing craft by 10 minutes from the scheduled start at 7:35 a.m. The stretch of beach that comprised Juno Beach sat at the foot of the village of Courseulles-sur-Mer, along with several reinforced German defensive positions on the bluffs. 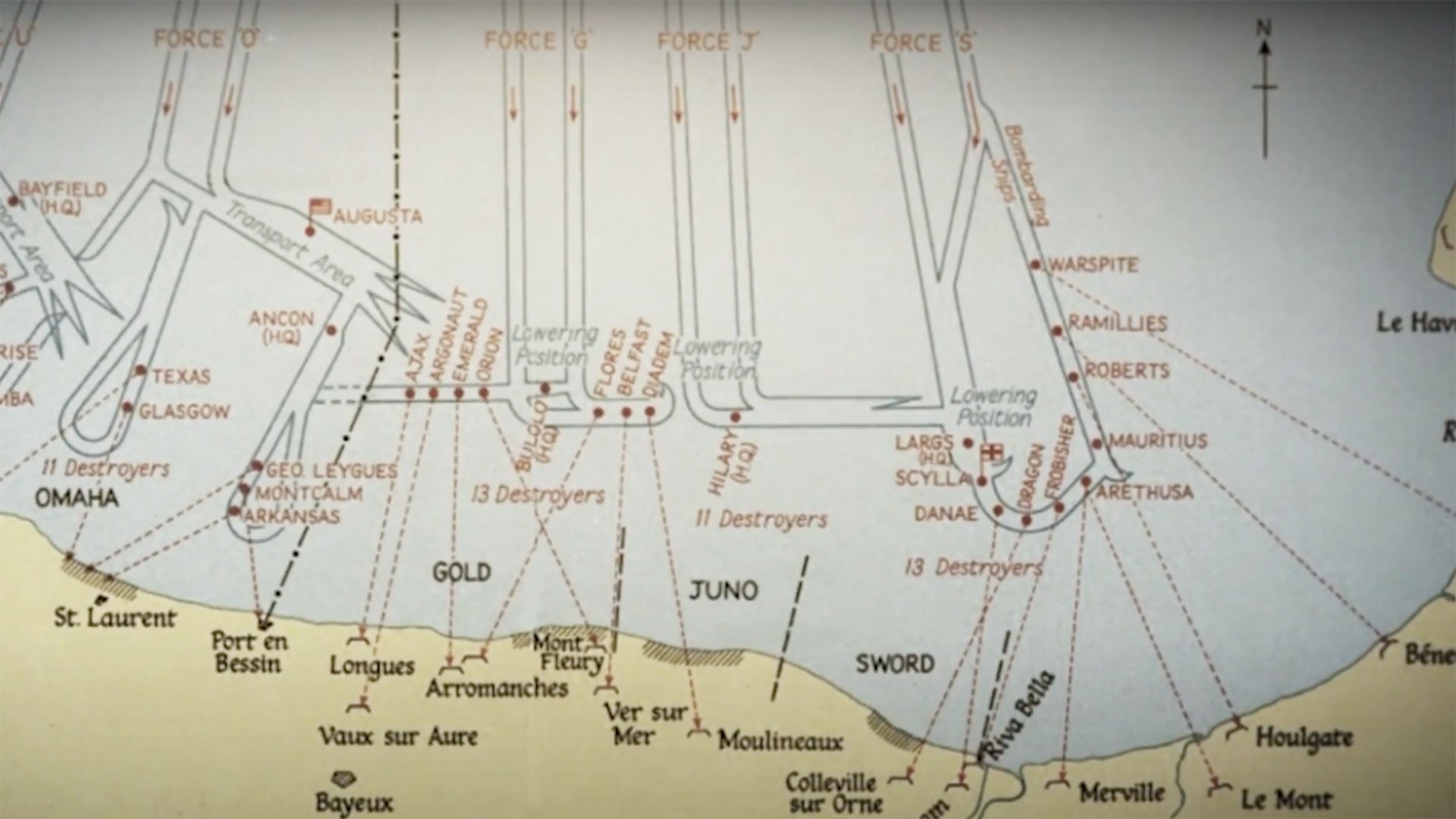 A Map of the Normandy Landings of June 6, 1944, showing Juno and Gold Beaches.

Results of the preliminary bombardments proved to be less than hoped for, as many of the German bunkers and other defensive positions opened fire on the craft as they got close to the beach. German MG42 emplacements raked the shoreline, resulting in large numbers of Canadian infantry casualties. Through the withering German fire, the Canadians bravely charged up the beach and were able to take out the defenses one by one, despite the losses.

The mainstay of the the Canadian infantryman during the landings was the No.4 Lee-Enfield, bolt-action rifle chambered in .303 British, much like their British allies on the neighboring beaches. Alongside the rifles, the Canadian infantrymen also carried the Sten Mk II submachine gun chambered in 9 mm. The Sten is a far more simplistic weapon, largely made from fabricated sheet metal with a blowback operation, but was easy to manufacture. One problem that could be encountered with the Sten involved over-loading the magazines, which would cause failures to feed. 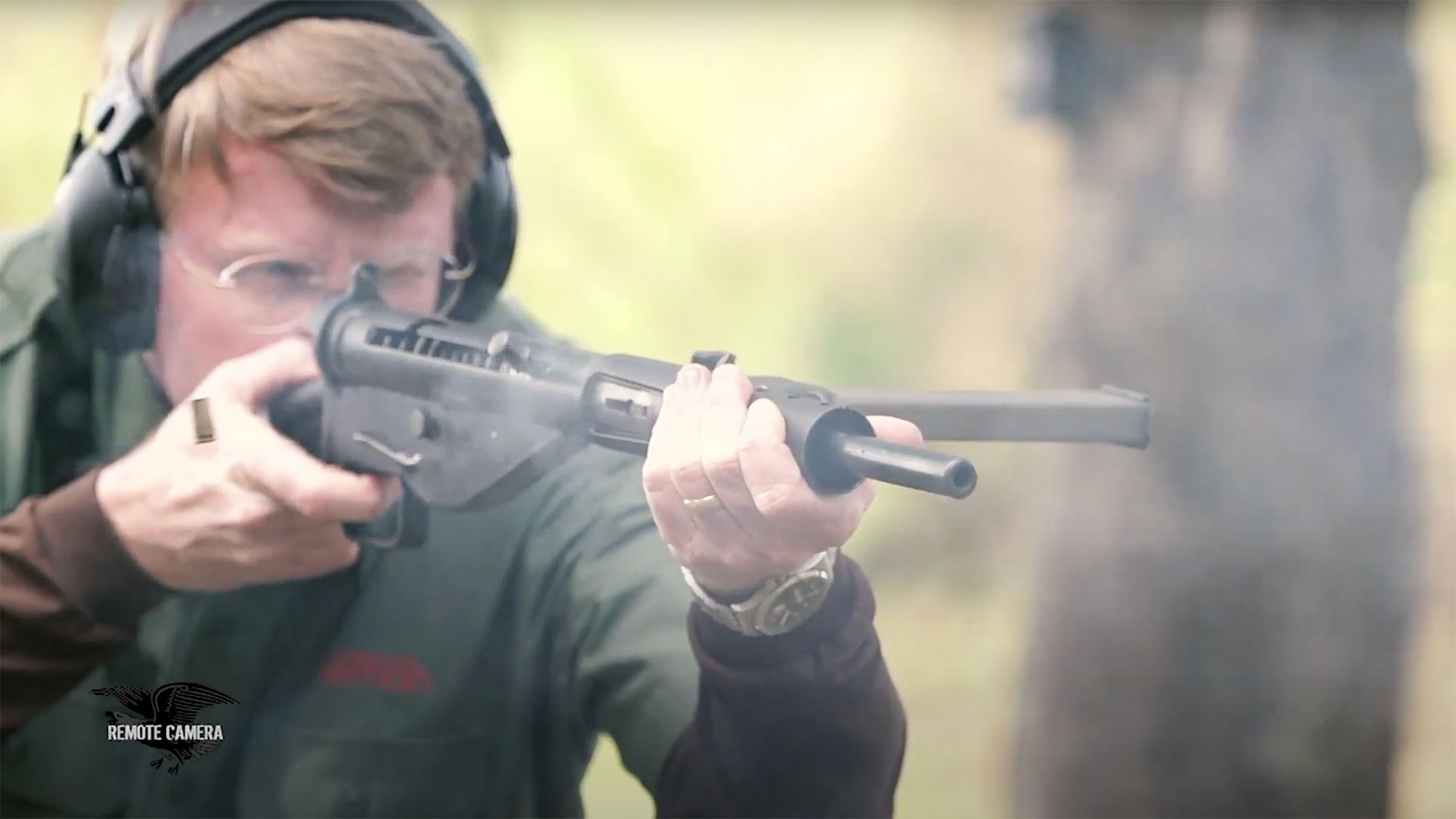 Despite the potential magazine issues, the Sten proved to be a reliable design and provided the Canadian infantrymen with an effective tool, better suited to the close-quarters fighting that took place amongst the buildings and bunkers. Of all the landings that took place on D-Day, the ones at Juno Beach were considered the most successful overall, and the Canadians were able to quickly gain a foothold for reinforcements to land.

To the west of Juno Beach was Gold Beach, which was one of the two landing zones designated to the British. The British forces that landed at Gold Beach faced many of the same perils as the Americans on neighboring Omaha Beach, with several reinforced German defensive bunkers overlooking the shoreline. One of the British units to land on Gold Beach was the 50th Infantry Division, a veteran force that had experience from throughout the war, given the immediate task of neutralizing beach defenses along the shoreline. A regiment from the 50th Division known as the Green Howards was tasked with taking out German positions on top of a large hill called Mont Fleury before moving further inland. 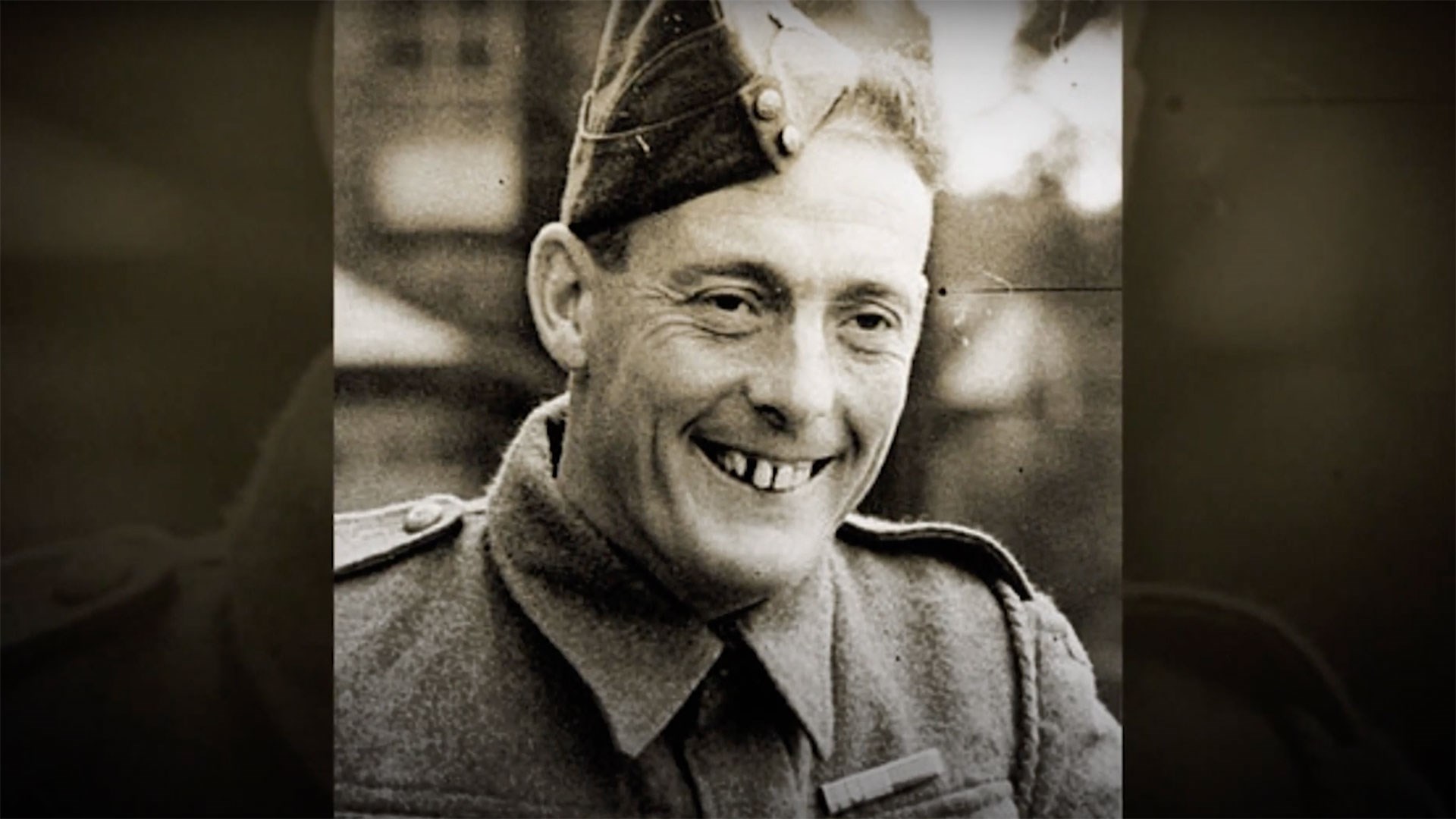 Of the men of the Green Howards, Sgt. Maj. Stanley Hollis was as much of a veteran of the war as his division, having been evacuated from Dunkirk in 1939 and later fought in North Africa and Sicily. As the men of the Green Howards landed on Gold Beach on June 6, they were met with great volumes of German machine gun fire from bunkers at the top of the beach. Sgt. Maj. Hollis picked up a stripped Lewis light machine gun and returned fire at the German positions.

After advancing off the beach and making their way inland, Sgt. Maj. Hollis’ battalion came across another German bunker complex and came under fire from its defenders. Seeing the leading element of his group come under fire from the bunkers, Sgt. Maj. Hollis charged the bunkers while firing his Sten from the hip, running all the way to the embrasure. He emptied the magazine of the Sten into the open slit and threw in a grenade, and afterwards flanked around the the rear entrance of the bunker where he took two of the occupants prisoner. 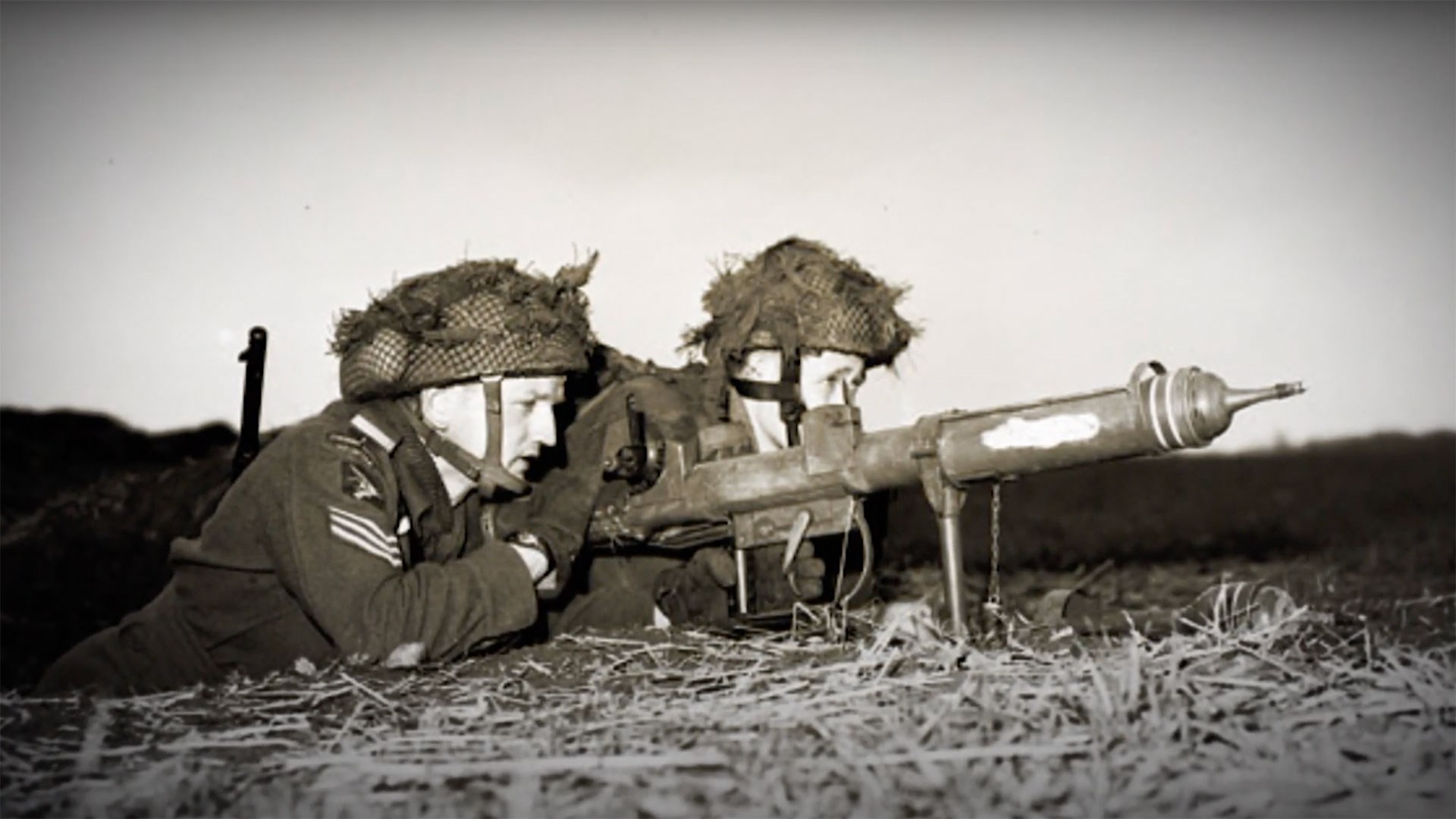 A two man British PIAT team set up in a position to fire the launcher.

A trench leading to another position caught Sgt. Maj. Hollis’ attention, which he then followed down until he arrived at the second German bunker. After another one-manned assault, he managed to take 18 German occupants prisoner. This action would earn Sgt. Maj. Hollis the Victoria Cross later on, but that was not the last extraordinary feat he made that day. As the Green Howards contained to push inland, Sgt. Maj. Hollis encountered a German anti-tank gun emplacement, and approached his company commander for permission to neutralize the position.

With permission granted, Sgt. Maj. Hollis, accompanied by two soldiers with Bren light machine guns, went out the destroy the gun emplacement with a Projector, Infantry, Anti-Tank (PIAT) launcher. The PIAT launcher was the standard British anti-tank launcher during the latter half of World War II, and was a unique infantry anti-tank weapon, as it did not use a blank cartridge or rocket launch system as was the case on other allied anti-tank launchers. Instead, the PIAT functioned as a giant spigot launcher, propelled by a spring housed in the back portion. 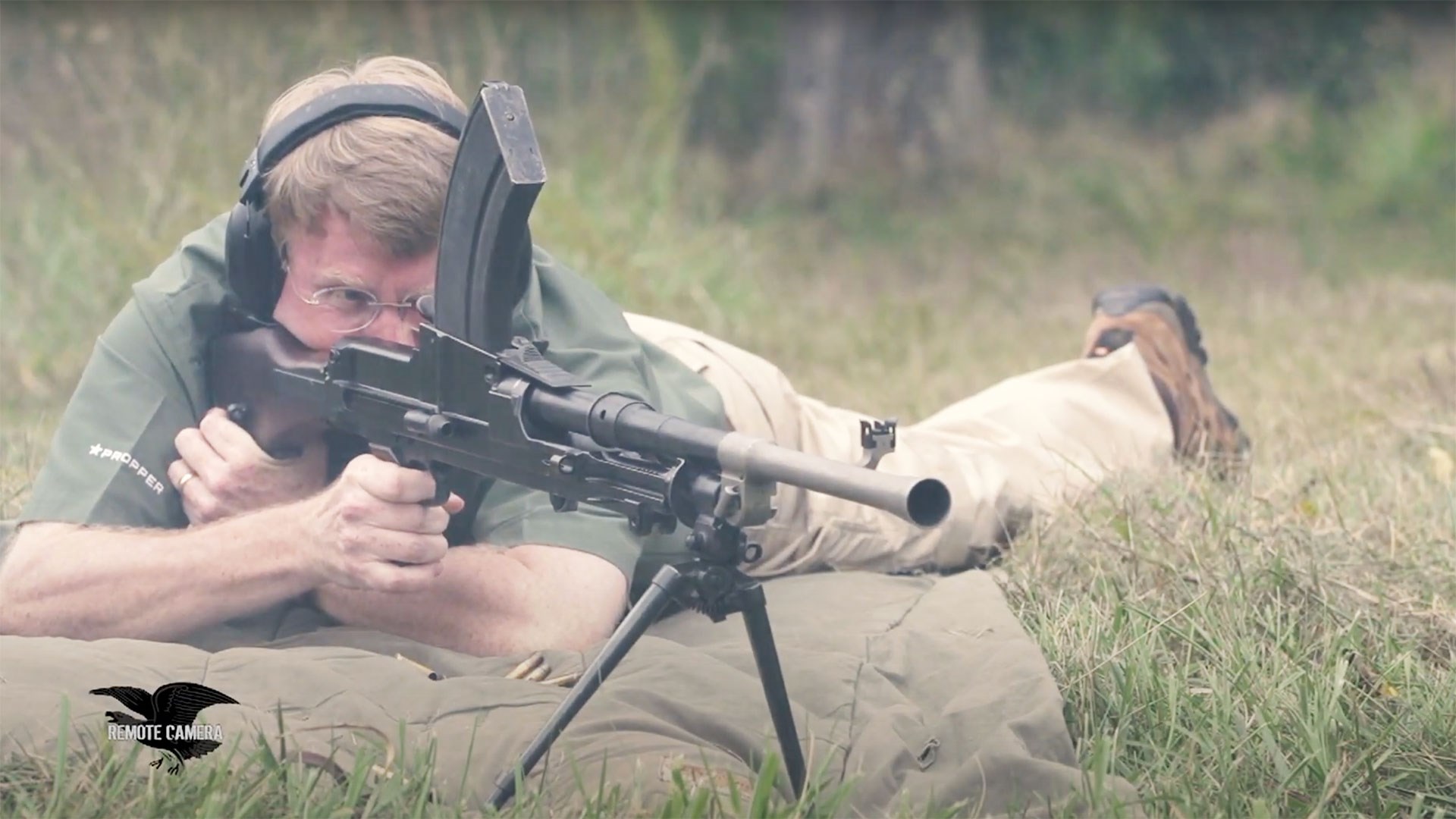 While not as well known in the United States, the Canadian and British participation in the D-Day landings at Juno and Gold Beach played a major role in securing the beachheads and ensuring the operation was successful in opening a path into German occupied Europe. The British and Canadian troops faced many of the same perils as the American to the west, and their actions, like those of Sgt. Maj. Hollis, were courageous in the face of a fierce defense.

The Men And Guns Of D-Day: Juno & Gold Beach