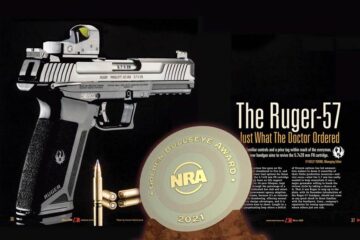 December 7, 2021 Guns In The News
Home»US News»WA Frustration: Agencies Still Not Accepting CCW Apps; Down 9K Since April
US News

U.S.A. –-(AmmoLand.com)- In the nearly six months that have passed since Washington State law enforcement agencies “suspended” taking new concealed pistol license applications, the number of active licenses has plummeted more than 9,100 according to data from the state Department of Licensing.

While the problem may not be uniquely Washington’s, a cursory glance at the situation in some other states suggests the application process is continuing elsewhere, even if slowed down. And it doesn’t appear to be a statewide issue.

Have agencies in your state slowed or “suspended” the application process for concealed carry licenses or permits, using the COVID-19 outbreak as justification? Weigh in below.

In Illinois, for example, Richard Pearson, executive director of the Illinois State Rifle Association told Ammoland fingerprinting is done electronically, apparently by various private vendors. Each person fingerprinted is given a specific ID number, which then goes to the Illinois State Police for processing new applications.

ISRA did sue the state police earlier this year in cooperation with the Second Amendment Foundation because the agency has slowed down the application process for a Firearm Owner Identification (FOID) card.

There does not appear to have been any interruption in Arizona, where the number of carry permits has continued to climb over the past six months, according to data from the Arizona Department of Public Safety. In mid-April, Arizona reported 355,963 permits, and in early August, that number had risen to 361,516.

But that’s not the case in Washington state. Most, if not all Evergreen State law enforcement agencies stopped taking new CPL applications on or about March 15 at the outbreak of the COVID-19 pandemic panic and shutdown of many services. Some have resumed service. Others are only taking renewals because that does not require fingerprinting.

There is nothing in state statute that appears to allow this. The state’s CPL application statute is quite clear in the first paragraph:

“The chief of police of a municipality or the sheriff of a county shall within thirty days after the filing of an application of any person, issue a license to such person to carry a pistol concealed on his or her person within this state for five years from date of issue, for the purposes of protection or while engaged in business, sport, or while traveling. However, if the applicant does not have a valid permanent Washington driver’s license or Washington state identification card or has not been a resident of the state for the previous consecutive ninety days, the issuing authority shall have up to sixty days after the filing of the application to issue a license. The issuing authority shall not refuse to accept completed applications for concealed pistol licenses during regular business hours.” (Emphasis added.)

About one-third of the decline is in Washington’s King County, where Seattle is located. It’s the most populous county in the state, but the sheriff’s department and Seattle Police Department have suspended the taking of new applications because it requires fingerprinting. Other agencies in the county may, or may not, be handling things differently.

If this application suspension is aimed at reducing gun-related crime, it’s a flop. As AmmoLand reported back in Mid-July, violent crime is on an upward swing in Seattle and King County, so suspending the ability of law-abiding citizens to apply for a CPL hasn’t done a thing to prevent homicides.

The Citizens Committee for the Right to Keep and Bear Arms declared last month in an open statement to the City of Seattle that gun control restrictions approved by voters there had failed, and the data proves it.

“In 2014, the Seattle-based Alliance for Gun Responsibility pushed through Initiative 594, a so-called “universal background check” measure that was supposed to keep guns out of the wrong hands,” CCRKBA said in a news release. “In 2015, the Seattle City Council pushed through the gun tax that has never come close to its revenue forecast. In 2018, the gun ban lobby rammed through Initiative 1639, which prohibits young adults from purchasing any kind of semiautomatic rifle and requires an “enhanced” background check and 10-day waiting period, plus proof of training.”

As reported by Liberty Park Press, “According to the FBI reports, in 2015—the first full year following passage of I-594, Washington state saw 209 murders, including 141 involving firearms. In 2016, FBI data shows an initial drop in statewide killings, with 195 murders including 127 involving firearms. However, in 2017, the numbers came back up, with 228 slayings in the state, including 134 involving guns and in 2018—the most recent year for which FBI data is available, there were 232 Evergreen State murders and 138 of those involved firearms.”

But the data gets worse for the gun control argument, especially if you’re one of the apparent thousands waiting to apply for a CPL.

“In Seattle,” according to the news report, “there were 18 homicides in the city in 2016, the first full year that the gun and ammunition tax were in effect. The following year (2017), that number jumped to 27 slayings, and in 2018, Seattle logged 31 murders, according to Seattle police data. Last year, Seattle saw 28 killings, and that number has already been surpassed and four months remain on the calendar.”

Meanwhile, based on just the King County CPL breakdown, there could be more than 3,000 people wanting to apply for a CPL but they cannot. Prior to mid-March when the coronavirus shutdown began, CPL numbers had been going up steadily across the state. Now, a check with gun owners on social media shows many counties and cities are still not taking new applications, and it has been nearly six months. Others are taking applications by appointment only, and the calendars are apparently booked up well in advance.

What other government function tied directly to a constitutionally-enumerated fundamental right could be “suspended” for that length of time, gun rights activists wonder?

Open carry is legal in Washington, protected by the state constitutional provision dating back to November 1889 that protects the individual citizen’s right to bear arms in defense of himself or the state. But in major metropolitan areas, open carry may not be practical.

The CPL application suspension has been attributed to concerns about the spread of the COVID-19 virus. In California, authorities have been accused of using the pandemic panic to undermine and restrict citizens’ access to firearms in violation of the state’s 10-day waiting period law. While it is a different statute in a different state, the underlying cause is the same: Using the coronavirus as a tool to roadblock gun rights.

Dave Workman is a senior editor at TheGunMag.com and Liberty Park Press, author of multiple books on the Right to Keep & Bear Arms and formerly an NRA-certified firearms instructor.

Fortify Your Home on the Cheap, Part 2

Below the Radar: The Tiahrt Restrictions Repeal Act