June 29, 2022 Guns In The News
Home»Commentary»Arms of Independence: The Guns Of The American Revolution
Commentary

Arms of Independence: The Guns Of The American Revolution

Americans celebrate something truly astonishing every year. The Fourth of July marks one of the most amazing events not just in our history but in the history of the world. Today marks a public declaration in which some of the greatest men of the age pledged their lives, their fortunes and their sacred honor to the idea of a nation where liberty reigned. The men who wrote it, signed it, issued it and fought for it backed up their stance through force of arms against one of the greatest military powers of the age. Without the guns they issued, the guns they themselves carried and the guns brought to bear by their allies, their dreams would never have been realized. These are the arms with which we earned our independence.

This Dutch/English flintlock fowler is typical of the kind of firearms militiamen used at the start of the American Revolution. Image courtesy of the NRA National Firearms Museum.

A Colonial Fowler At Lexington

On the brisk, clear morning of April 19, 1775, a group of Lexington militiamen under the command of Capt. John Parker left Buckman Tavern and gathered on their village green to face an advance guard of British regulars under the command of Maj. John Pitcairn. Despite being styled as “minutemen,” the group of men under Parker’s command was more of a town militia than a quick-reaction force. As six companies of British light infantry marched into the square, neither the officers nor the men on either side fathomed how the encounter would end. There’s no clear answer as to who fired the first shot, but it was fired, followed by snapping shots of musketry from the militia and ragged volleys fired from the King’s undisciplined troops.

Unlike the British infantry, who had a standardized small arm, the Americans who stood on the Lexington village green had a smattering of irregular guns. Common among them was the archetypal flintlock fowler. These long, smoothbore guns were the workhorse arms of the colonial settler. Loaded with shot, it could readily take game birds and waterfowl. Loaded with buckshot or a round ball, it could be called upon to take game at short distances. Despite the bloodshed, the Revolution would still take months to gain steam. The Declaration of Independence was still more than 14 months away, and as the war developed, standardized arms would start to show up in the ranks of American troops. However, the simple colonial fowler is the gun we used at the start of our fight for independence. Today, the smoothbore flintlock that Capt. Parker carried with him on the green that fateful morning now hangs in the Massachusetts State House.

An example of a circa-1770s American longrifle. Image courtesy of the NRA National Firearms Museum.

An American Longrifle At Saratoga

The smoothbore fowler wasn’t the only privately owned arm that played a pivotal role in the American Revolution. Next to the flintlock fowler, the American longrifle was a unique tool in the colonial arsenal, and it was used to great effect during the war. Eighteenth-century warfare primarily employed the smoothbore flintlock musket in conjunction with the bayonet. Because of their smooth bores, muskets were cheaper and easier to manufacture. Combined with that, contemporary military doctrine in Europe prioritized speed of loading in order to fire massed volleys more quickly. The slow loading time of a rifle, combined with the training necessary to skillfully shoot such an arm, made it unfeasible for use in traditional pitched battles common up to the American Revolution. American marksmen, though, showed British troops exactly how well-trained and equipped shots could make a difference on the battlefield.

“The enemy had with their army great numbers of marksmen, armed with rifle-barrel pieces; these, during an engagement, hovered upon the flanks in small detachments, and were very expert in securing themselves, and in shifting their ground. In this action many placed themselves in high trees in the rear of their own line, and there was seldom a minute’s interval of smoke, in any part of our line without officers being taken off by a single shot,” wrote John Burgoyne after the Battle of Saratoga. One of these crack shots was Timothy Murphy, one of 500 handpicked riflemen who accompanied Daniel Morgan to upstate New York, where they would fight in the Battle of Saratoga. At one point during the fight, Murphy was directed to take out British Gen. Simon Fraser, who sat mounted on a horse 300 yards away. It took Murphy three shots, but he brought Fraser down and contributed to the American victory at Saratoga.

Image courtesy of the Institute of Military Technology.

At the outbreak of conflict in 1775, the British army was equipped with semi-standard Land Pattern muskets, better known by the soldier’s nickname, the “Brown Bess.” True standardization in the age before interchangeable parts was nearly impossible to obtain, but for the purposes of military logistics and drill, the Land Pattern muskets came close enough to the mark. Starting in the 1720s, the British military establishment codified a pattern of musket that would evolve for more than 100 years, starting with the Long Land Pattern and continuing into the Short Land Pattern by the start of the American Revolution.

Despite its British origins, the Brown Bess was not exclusively employed by legions of lobsterbacks as they wrestled American armies for control of the colonies. At the beginnings of the conflict, colonial Committees of Safety contracted with gunmakers to supply their burgeoning militias with domestically produced arms, not because the colonists lacked personal arms but because standardized arms were necessary for logistics. Many of these Committee of Safety muskets were patterned after the Bess. True, too, is the fact that many former British muskets that served the Crown were turned against it during the Revolution. One particular example of a 1756 Long Land Pattern musket in the Institute of Military Technology displays the kind of arms deployed for and against independence. While it’s impossible to know who carried this particular Bess or where they fought, it’s just one of thousands of Brown Bess muskets that appeared on both sides of the battlefield.

Image courtesy of the Institute of Military Technology.

A U.S.-Marked Charleville From Virginia

Despite the worthiness of the U.S. cause, the fledgling United States was not going to win a protracted war with the largest military power on Earth without some outside help. Following the American victory at Saratoga in 1777, King Louis XVI began the talks that led to a formalized Franco-American alliance and enabled French support to flow to the colonies. Much of this support came in the guise of arms and ammunition, notably in the form of Charleville muskets from French state arsenals. Like the Brown Bess, development of the Charleville spanned much of the 18th century and saw service into the 19th century. Continental army troops began fighting with .69-cal. Model 1763 and 1766 Charleville muskets, and many remained in U.S. service for decades after the American Revolution, featuring stamps such as “U.S. or “U.STATES” embossed into their locks, stocks and barrels. 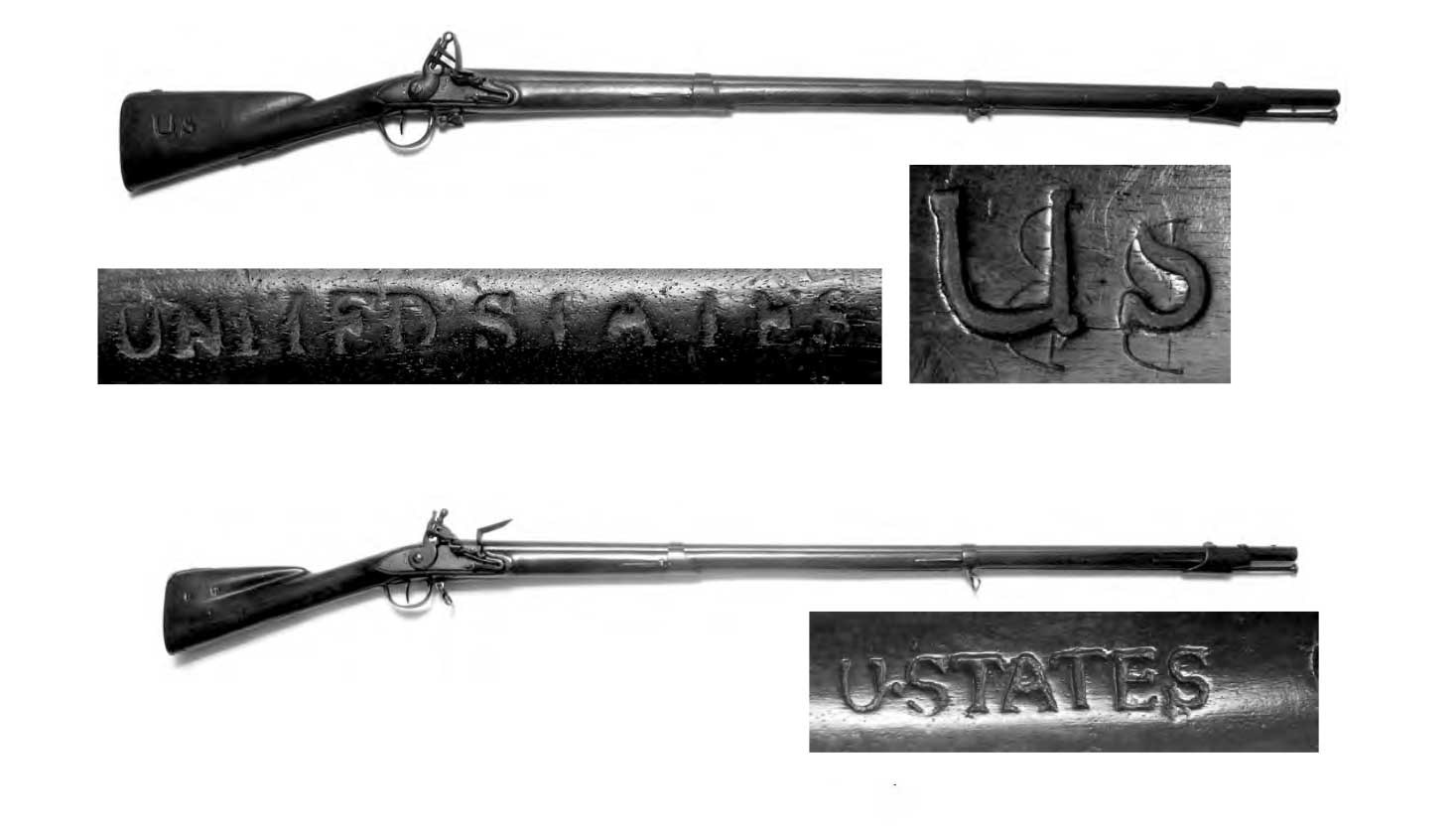 Image courtesy of the American Society of Arms Collectors.

The stamps hearken back to one of Gen. George Washington’s earliest orders, which mandated that muskets in Continental army service be marked “United States,” and at least one documented example highlighted by the American Society of Arms Collectors shows a U.S.-surcharged Charleville musket with faint military markings similar to those found on Virginia’s Rapahannock Forge guns. While the firearm’s provenance is unknown, it’s possible that the musket may be connected to a Virginia regiment and may have even been carried by one of Washington’s Life Guards. Possibly no better homage exists to the battle-tested Charleville than the fact that the first domestically produced martial musket from a U.S. armory, the Model 1795 Springfield, is nearly identical to the French-supplied Charleville flintlocks that armed Continental soldiers during the Revolution. 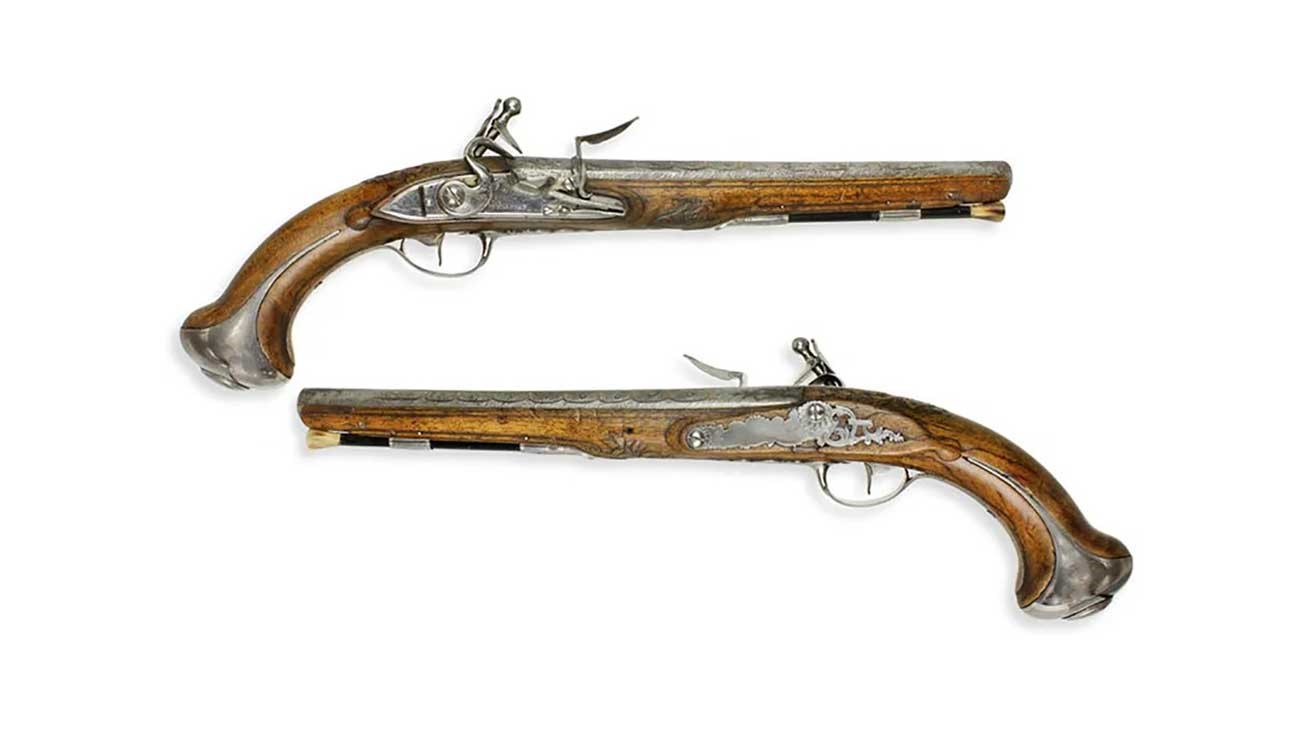 As well as muskets, rifles, fowling pieces and other small arms, pistols served a role in the Revolution as well, arming couriers, officers and the Continental Dragoons. However, possibly one of the most poignant sets of flintlock pistols to have served in the American Revolution rode with the man of the hour, Gen. George Washington. Known today as the Lafayette/Washington pistols, they are true American treasures, which were gifted to Washington by Gilbert du Motier, Marquis de Lafayette, one of the greatest advocates for American Independence and a critical player in obtaining foreign aid for the Continental army. Washington treasured Lafayette’s friendship and considered him an adopted son. The pistols reflect the appreciation and respect Lafayette held for Washington, as they’re some of the most exquisite arms surviving from the Revolution.

The pair of pistols is mounted in polished steel and stocked in beautiful European walnut, complete with rococo styling and gold and silver inlays. They measure 17.5” long and feature smoothbore barrels of approximately .57 caliber. The maker’s name, Walster, gives some insight into the origins of the guns, as Jacob Walster was a French gunsmith in the city of Saarbrücken, now in modern-day Germany, and made the guns sometime between 1775 and 1777. Washington is reputed to have carried the guns at Valley Forge, Monmouth, Yorktown and later in the Whiskey Rebellion during his presidency. Throughout their history, they’ve been owned by members of the Washington clan, the Marquis de Lafayette’s family and President Andrew Jackson. During Jackson’s ownership of the pistols in 1824, Lafayette was asked if he recognized the guns, whereupon he smiled and said that he did, having gifted them to his “paternal friend” George Washington in 1778. The pistols were purchased by a Pennsylvania foundation in 2002 for $1,986,000 and today, they reside in the Washington Collection at the Fort Ligonier Museum in Ligonier, Pa.

From the fowling pieces carried by militiamen on the Lexington village green to a finely finished pair of flintlocks tying together two of the greatest figures of the Revolution, the American story couldn’t have been written without the small arms that made it possible. These freedom fighters suffered through vicious campaigns and brutal winter quarters and faced hardships that are nearly impossible to imagine in modern times. Many of them remain unknown, unsung heroes who lie in unmarked graves on the battlefields where they fell. It is worth noting that arms carried by individuals on the wild American frontier weren’t that different from the arms resting on the shoulders of redcoats who came to subjugate them. In many cases, they were better and their users more practiced in the art of shooting. Ultimately, gaining our independence didn’t rely on skill or technological superiority. It took a dedication toward the ultimate ends of humanity. It was a fight to defend the self-evident truth that all men are created equal, that they are endowed by their Creator with certain unalienable Rights, that among these are Life, Liberty and the pursuit of Happiness.

American Muskets of the Revolution

Arms of Independence: The Guns Of The American Revolution