We heard a sound like a fastball finding the back of a catcher’s mitt. I looked into the Czech Republic forest then caught in the golden autumn light of late afternoon. My guide smiled and said, “Mouflon. They are fighting.” She had some English, a degree in forestry and guided seasonally, as hunting is a necessary way to manage the health of the forest.

When the European mouflon came, I thought of them as creatures out of a fairytale, as a mature ram’s horns look outsized on its little head—a good ram is only about 100 pounds. When I did shoot the one I was instructed to, he went right down but kept kicking. I bolted in another round and wanted to shoot again, but its outlandish horns were in the way.

I used the CZ 600 Alpha’s bolt-release button to empty the chamber without switching off the safety (a nice touch on this rifle) and climbed out of the stand.

I chambered a fresh round and circled the ram. It saw me, leapt up and ran. I dropped to one knee, swung the rifle as I disengaged its plunger-style safety and put down the mouflon for good.

I relate all of that to note how intuitive this new CZ 600 rifle is. It has a tang-mounted safety that is a plunger that moves up and down through the rifle stock. Even under pressure it was natural to use, even though, before shooting this rifle just a few days prior, I’d never used this safety design.

Basically, the safety consists of a button that’s located at the top tang position. You push it down to disengage the safety. You push it back up from the bottom of the stock—just behind the trigger guard—to reengage the safety. In the safe position, the bolt is locked in place. This is good, as it keeps the bolt closed when carried in the field. Its bolt-lock-override button also allows you to remove the bolt with the safety engaged.

I hunted with the CZ 600 Alpha, the hunter’s model in this line of bolt-action rifles. This CZ 600 family of bolt-action rifles also includes the Lux (it has gorgeous wood and more), the Range (guaranteed to .75 inch at 100 meters) and the Trail (its PDW-style stock allows it to collapse easily).

CZ’s ambition was to create a platform that could cut your local gunsmith out of nearly everything all at reasonable price points: $749 for the Alpha; $849 for the Lux; $1,155 for the Trail; and $1,199 for the Range.

They achieved their goal. To start, the 600’s bolt locking lugs don’t engage with the receiver; instead, it has reciprocal lugs machined into the barrel. The rifle’s barrel slides into the receiver rather than threading in; there are no external threads and there is an indexing slot on the barrel that prevents someone from inserting a barrel incorrectly. This makes it easier for anyone to change barrels, as you don’t need to worry about the headspace when swapping a barrel. The barrel is removed and reinstalled via three Torx fasteners in the receiver that are tightened or loosened in a specific pattern that isn’t difficult to follow (just follow the directions).

The CZ 600’s barrel is cold-hammer forged with a threaded muzzle for attachments. It’s available in different weights and lengths depending on the model. Depending on the model, the 600’s receiver can be either steel or aluminum. CZ also opted to use Picatinny/Weaver style bases; though, on some models, it can come drilled and tapped for other mounts and rings. They treat this line of rifles with their new BobOx chemical heat treatment, giving it a hard, durable finish that resists corrosion.

All 600 models use an oversized bolt knob to help with control. They use six locking lugs—except for the smallest action that uses three—and these bolts have a compact 60-degree bolt throw.

CZ ditched the classic Mauser claw extractor, but still managed to make the CZ 600 controlled-round-feed. It also has controlled ejection. The CZ 600 does this with a plunger-style ejector that pops the case out. As the bolt is moved backward, the plunger engages with a stop that moves the plunger forward and pops the brass free. The harder you work the bolt, the farther the brass will fly. I worked it slow at the range and had brass stay in the action, and I worked it fast and sent them flying 10 feet. The bolt head can also be swapped to accommodate a new chambering. Most people can do this without a gunsmith, but some finesse is needed. 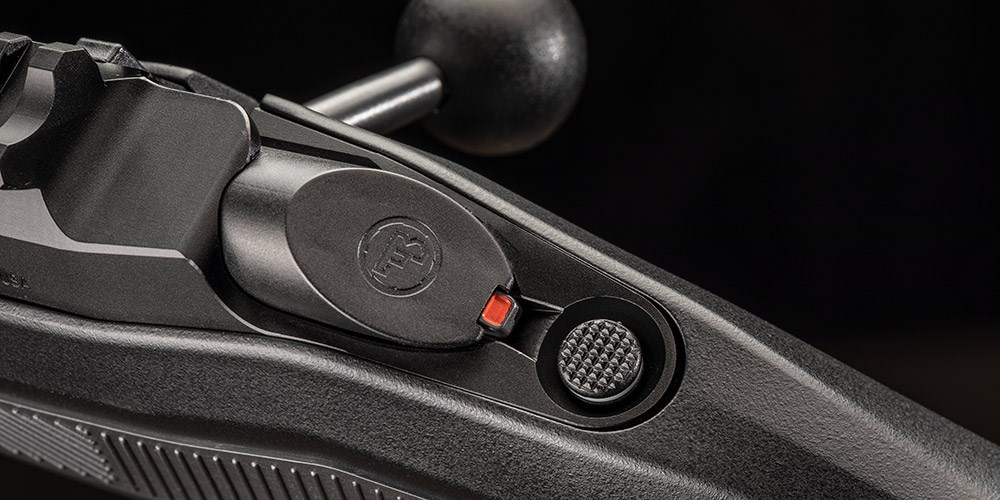 The trigger on the CZ 600 is user adjustable and has four preset positions. These are set for trigger pull weights between about 1.3 and 3 pounds. Changing its trigger weight was as easy as using an Allen wrench. At each setting, I didn’t feel any creep. It has a smooth, predictable pull. I kept it on its lowest setting while shooting from a bench at the range. I would increase its weight for an Eastern deer hunt where game tends to be close and is often walking. In bigger landscapes in the West, however, I might put it on its lowest setting if I could shoot without gloves.

The CZ 600 has a locking detachable box magazine. Just insert it and slide a release button forward to lock it in place. The magazine can be topped off just as a conventional top-loading bolt-action can be. These magazines are made from polymer and they click in nicely.

The 600 Alpha tested for this review loaded smoothly from its magazine. A few times, it took a little pressure on the back of the bolt head to push the round into the chamber, but, as this rifle was right out of the box, this wasn’t surprising.

CZ promises 1 MOA or less at 100 meters with “match-grade factory ammunition” for the Alpha. The rifle I tested liked Hornady American Gunner .308 Win., 155-grain BTHP ammunition. My smallest five-shot group at 100 yards with this ammo was .46 inch—pretty darn good.

In sum, this isn’t just a great rifle at these price points, though it is that, but rather it is simply a great rifle. I like the CZ 600’s safety and the trigger system. I appreciate its modular design and that its engineering cuts gunsmiths out of much of the work. This is a rifle worth considering.

This Camp 9 Ain’t Doing So Fine