The movies tend to make shotgunning look effortless for even the most-inexperienced shooters. For instance, have you ever noticed that the moment the hero picks up a stockless gun, they can immediately shoot from the hip with precision accuracy? Furthermore, the pattern is so wide it nearly hits all four walls of the room.

The truth is the further from the eye a firearm strays, the harder it is to put lead on target. This malady poses the question: Why not hold it up and sight down the barrel? Well, your teeth, for one. Heavy shotgun-like recoil (looking at you, 12-gauge) is enough to drive stockless guns straight into your moneymaker, which is why they are limited to hip shooting or, at best, chest-height operation. So, why not just use a full-size shotgun? You certainly can if you so choose, but many people prefer a smaller gun for home-defense.

So, these stockless designs have been around a while, and they’ve been on the right track, but most could use a little more refinement. Henry Repeating decided to take a crack at it and delivered on a useful platform in a style that boldly reflects the Wisconsin-based manufacturer.

At first glance, you might be tempted to call the lever-action Brass Axe a “shotgun,” but Henry says that according to the Bureau of Alcohol, Tobacco, Firearms and Explosives (ATF)  rules, it is classified merely as a “firearm.” This means that you should be able to enjoy features like its 15.1-inch barrel without having to apply for a federal tax stamp (though you’ll still want to check your local and state-level laws).

The second-most-notable feature of this gun is its .410 chambering, which makes this firearm exceptionally light to fire—even at eye-level. Perception of the .410 bore in the gun community is often that it’s not suitable for defensive work; however, what most don’t realize is that even lightweight birdshot has more energy than .45 ACP at the muzzle. This makes the .410 cartridge absolutely devastating inside confined spaces. It also reduces potential collateral damage, as it sheds most of its velocity in a short distance. 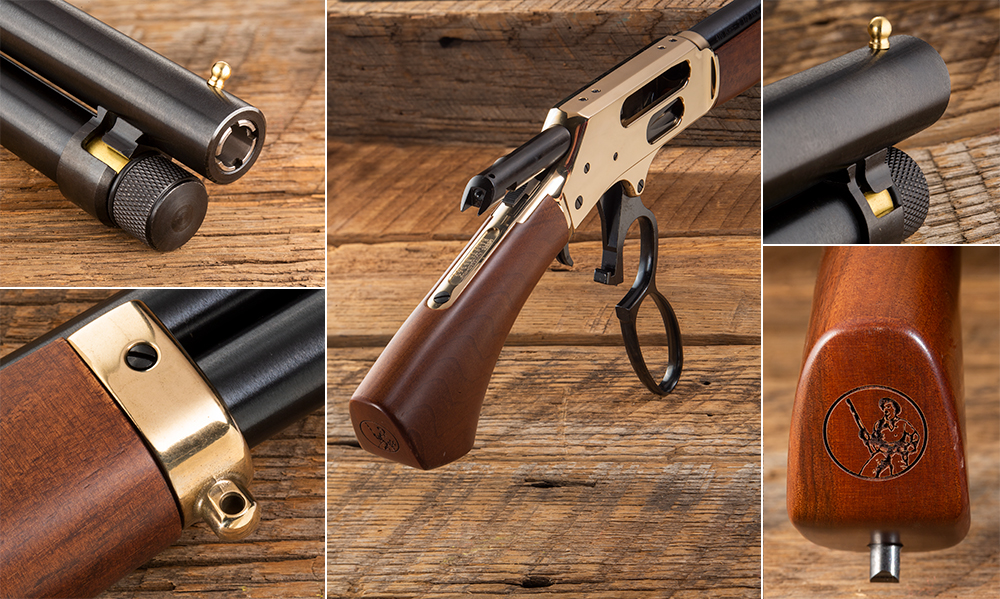 The Brass Axe features fine brass contrasting a hand- some wood stock. Its lever is smooth. The 15-inch barrel and .410 chambering, which provides similar energy at the muzzle to the .45 ACP, make it a great home-defense choice. It’s also a lot of fun to shoot!

Like many of the company’s conventional lever-action rifles and shotguns, the Brass Axe features a five-round tubular magazine that can be filled from either the muzzle end or back by the breach via a side gate. I’m fond of this design because you can top off your ammunition without having to break your shooting position completely. Furthermore, the front opening allows for speedy unloading should that bump in the night turn out to be only the cat knocking over a tchotchke. 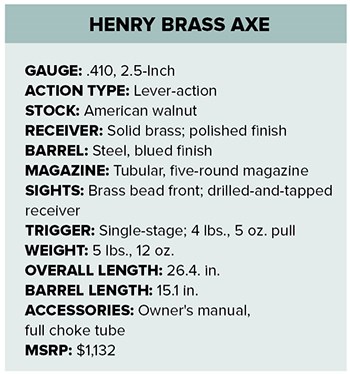 As the name implies, the Brass Axe features that highly polished brass receiver that is deeply associated with the original Henry rifle and today’s modern variants. This finish pops nicely against the blued-steel barrel and the handsome American walnut furniture, creating a slick-looking package indeed. You can also choose a matte blued-steel finish for a subtler look.

As utility is the goal, the bore of the Henry Brass Axe has been threaded to accept Invector-style chokes, with a full choke included and installed. This feature allows for adjustment of the pattern and even opens it up to hunting small game. Realistically, you can use this gun to bust clays as well, and, although not ideal, it’s a great way to keep your handling proficiency up. Other useful features include a pair of sling studs that allow you to toss it over a shoulder when taking a stroll and a drilled-and-tapped receiver should one wish to add a red dot or laser to assist with aiming.

I was excited to bring the Brass Axe to the range, as it would be one of the more-eccentric firearms of my evaluation career. I decided to test it with the same protocol that I would put a defensive shotgun through and then have a little fun with it on various steel targets.

Using Aguila’s high-velocity 00 buckshot, I dropped a single shell into the chamber and fired from the hip. I didn’t think it would be wise to start at eye level, as I only had an assumption of both the firearm and ammunition’s recoil at this point in our relationship. Well, the Axe produced minimal recoil that is best likened to a large-format pistol chambered in .223 Rem. With that worry behind me, I sighted down the barrel and patterned the gun at 15 yards, which I considered the outer limits of its range. I was indeed surprised to see that every shot put all four of its pellets within my 21-inch scoring circle, but as a whole, the impact was about three inches high and maybe two inches right. I experienced uninterrupted function and admittedly even a few schoolgirl-like giggles throughout the test. This thing was fun to shoot! 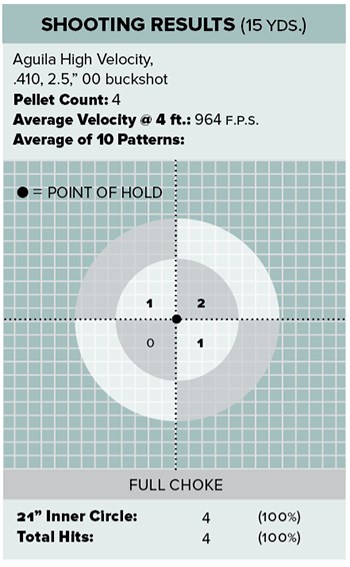 With formal pattern testing in the rearview, I navigated a mock course of fire that replicated some of the tight spaces you might encounter in your home or vehicle. Here is when I experienced the true advantages of this compact weapon, as I could stay tight to cover and didn’t need to expose very much of my upper body to engage the steel “threats” inhabiting the range. I enjoyed the fact that I could use the bead of the Brass Axe in the same manner that I would on a shotgun, and the recoil was light enough to shoot even from awkward positions—one could almost believe themselves an action hero, after all.

As I wrapped things up, I cased up Henry’s latest addition to my workbench and smiled. Fun, yes, but it is one of the few unorthodox designs with some very real work value. I could see this firearm neatly nestled under the gunnels of my favorite watercraft or even stuffed into a hiking pack for defense. Compact firearms always have a place in the self-defense market, and the Henry Brass Axe proves that they don’t have to be a snooze to shoot.