June 30, 2022 Guns In The News
Home»Commentary»Quantum Cloning: A Colt Model 601 Brought Back To Life
Commentary

Quantum Cloning: A Colt Model 601 Brought Back To Life

Puerto Rico’s Police Bureau decided to liquidate some of its old hardware in early 2020, offering firearm enthusiasts the chance of a lifetime. Among the items that the bureau sold were several demilitarized examples of the very first AR-15 produced by Colt – the Model 601.

In a collecting world saturated by mundane parts-kit builds of everything from AKs and Galils to FALs, the demilled Colt 601 kits that came out of Puerto Rico last year represented a quantum change of pace, and I could not resist the temptation. Yes, there are 100-percent original 601s available on the NFA market as transferable machine guns, but those firearms are way out of the price range of most working-class shooters. 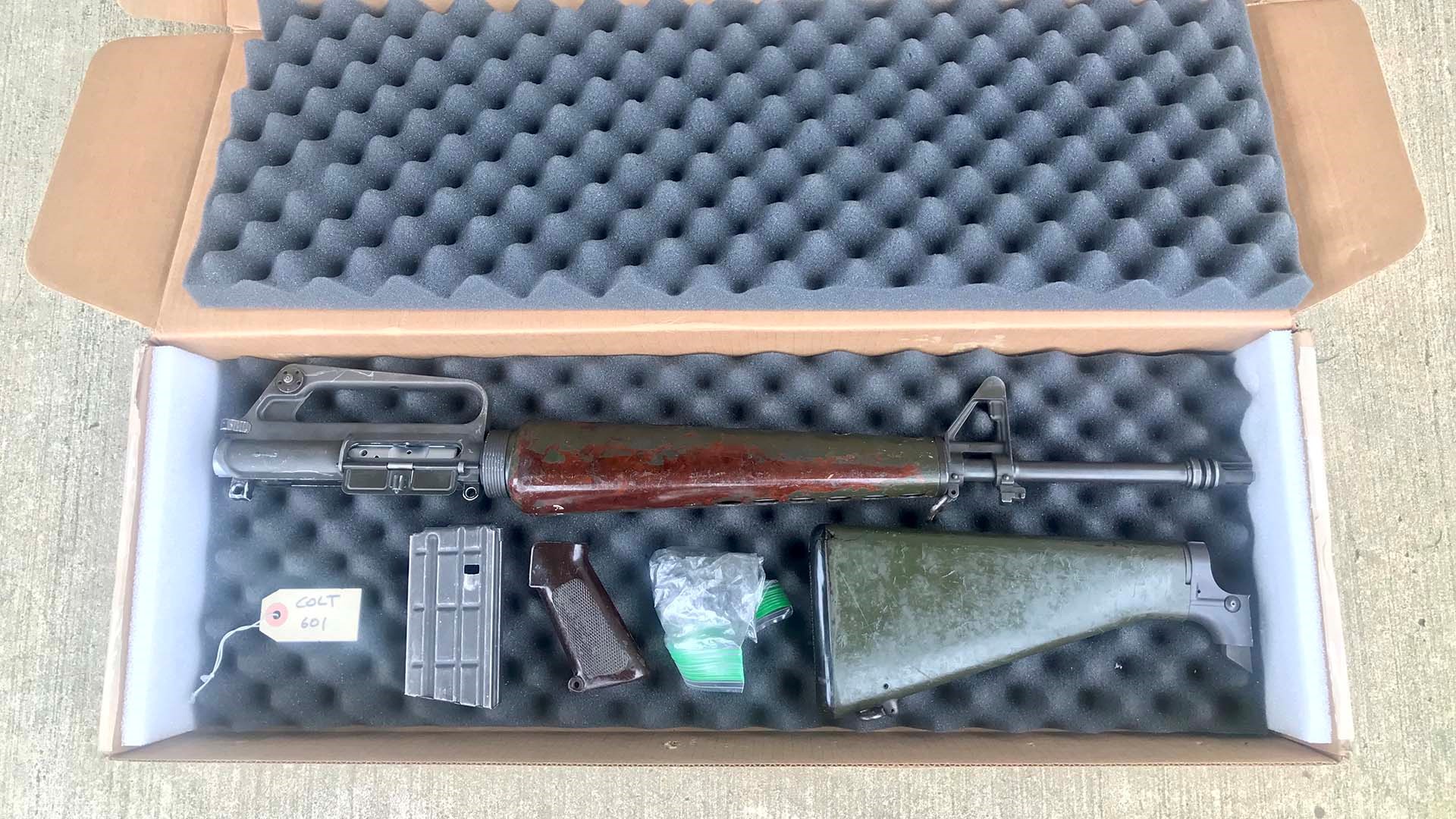 The demilitarized Puerto Rico Police Bureau Colt Model 601 kit as it arrived on April 4, 2020. Photograph by the author.

With that being the case, a build using an original 601 kit offered a more economically practical alternative that also had the benefit of adding a historically significant semi-automatic to the world of military surplus collecting and shooting. After all, we are just “stewards in time” for these firearms, insofar as we will inevitably hand them off to another collector to shoot and enjoy at some point. However, it would be insincere for me to represent that I bought the kit in the interests of serving the greater good of the shooting world, because the reality here is that I was starstruck at the thought of finally having a Model 601 – or at least the closest facsimile to an original 601 that I will ever own.

The kit that arrived consisted of the complete upper-receiver assembly, with chrome bolt-carrier group, triangular charging handle, the internal fire control components in a plastic bag, the pistol grip, an original 20-round “waffle” magazine and the complete buttstock on what was left of the original receiver. The Puerto Rican police demilitarized the rifle with a simple band saw cut through the receiver just in front of the rear take down pin hole. While the front part of the cut receiver was not included in the kit, the rear part was, but only because it held the buffer tube and buttstock assembly together. 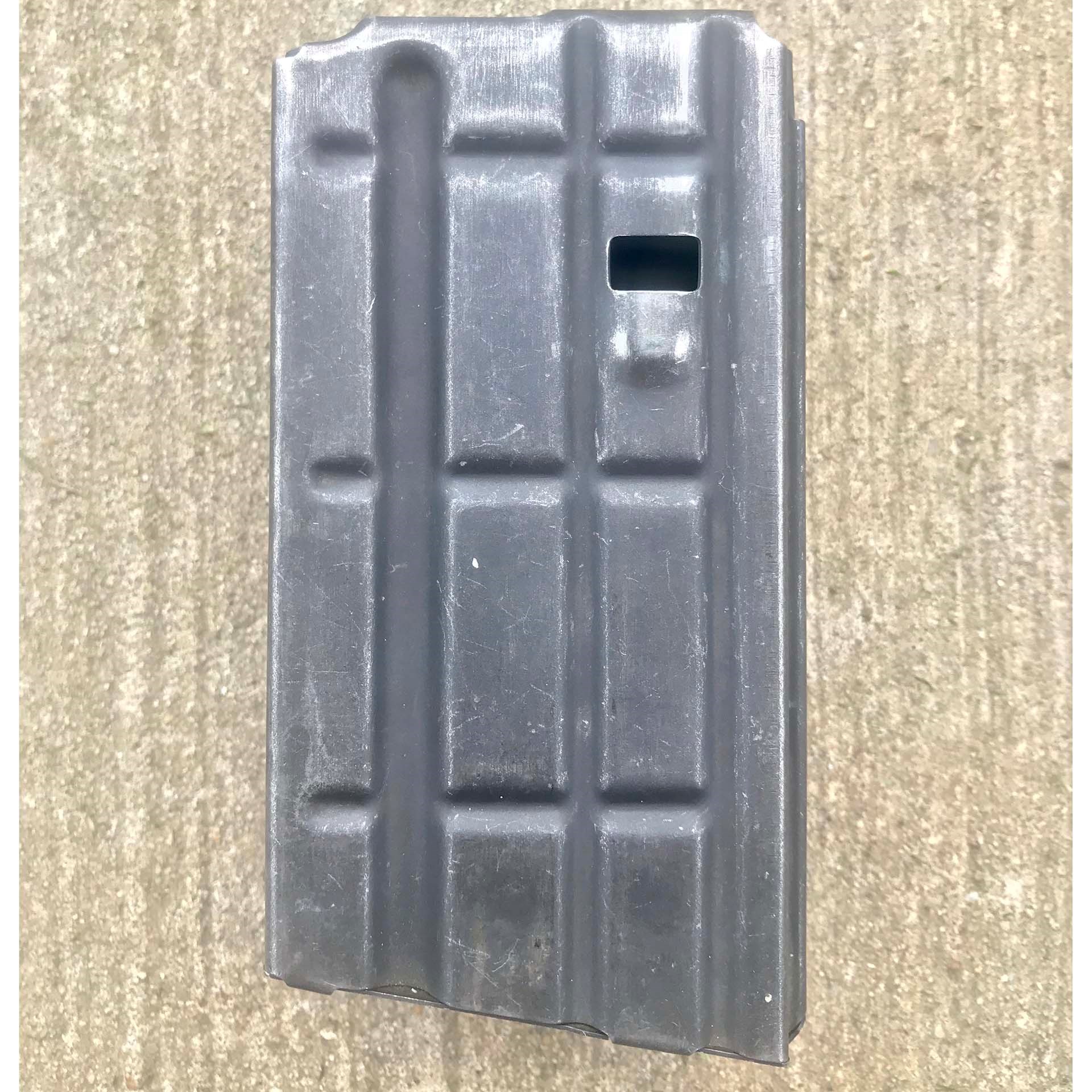 The original Colt 20-round “waffle” magazine that came with the kit (April 4, 2020). Photograph by the author.

Aside from an intact receiver, the only other part missing from the kit was the trigger guard. The parts exhibited evidence of heavy handling, especially on the ultra-rare green 601 furniture, but plenty of paint remains present on the buttstock. The best news about the kit was the bore, which was bright and shiny with strong rifling. That is no small feat, considering that it was made prior to the introduction of chrome lining. The barrel was also the strongest selling point for buying the kit because it is what makes the 601 unique among the entire AR-15 and M-16 lineage.

Winchester made 601 barrels for Colt with 1:14” twist rifling, but that was one of the first features to be changed. After turning out approximately 14,500 Model 601s, the Model 602 went into production in 1963 and, at the government’s request, its barrel utilized 1:12” twist rifling. While that might sound like a minor technical detail, the change to tighter-twist rifling between the 601 and the 602 reduced the rifle’s lethality in a meaningful way. 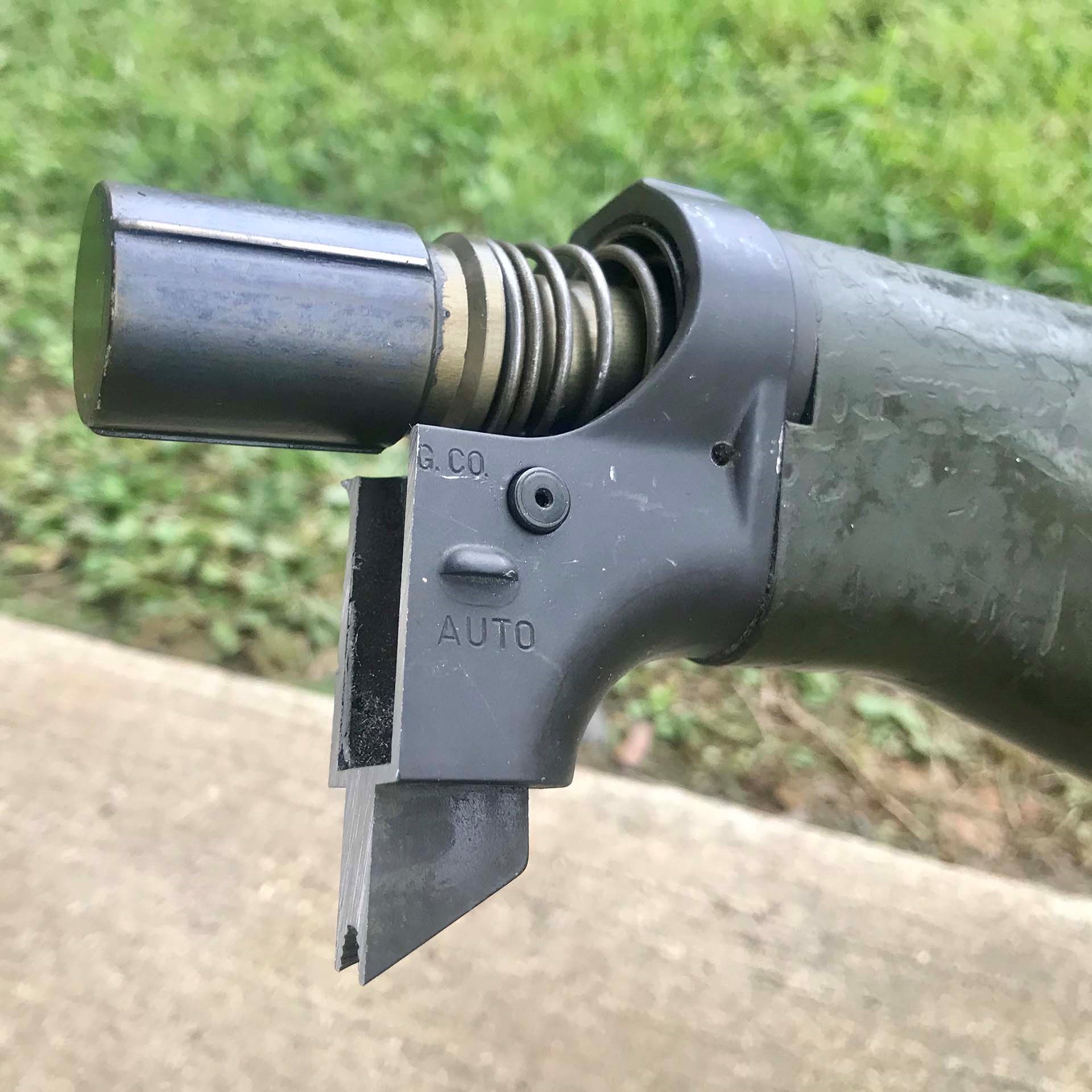 The rear section of the bandsaw-cut Colt 601 lower receiver was included with the kit only because it held the buffer tube and buttstock assembly together. The original Edgewater buffer and mainspring are seen here protruding from the buffer tube (April 4, 2020). Photograph by the author.

Bullets fired through the 601’s 1:14” twist barrel were ballistically stable in flight but tended to tumble on impact with a soft target and inflict a significant amount of tissue damage. The 602’s 1:12” twist barrel exerted more ballistic stability, but the bullets produced noticeably less tissue damage. The dramatic ballistic performance of bullets fired through the longer twist rifling of the 601 was powerfully demonstrated in 1962 as a part of Project AGILE.

This was an Advanced Research Projects Agency (ARPA) effort to develop specialized weapons and equipment for the types of limited communist insurgencies that the U.S. and its allies were facing in various hotspots around the world. The intensifying war in Vietnam was one of those hotspots, and the new Colt Model 601 seemed like the perfect rifle to arm the small-statured South Vietnamese soldiers, who were doing most of the fighting at the time. That being the case, a full-scale test and evaluation of the rifle was conducted there during the first half of 1962 using 1,000 new 601s. 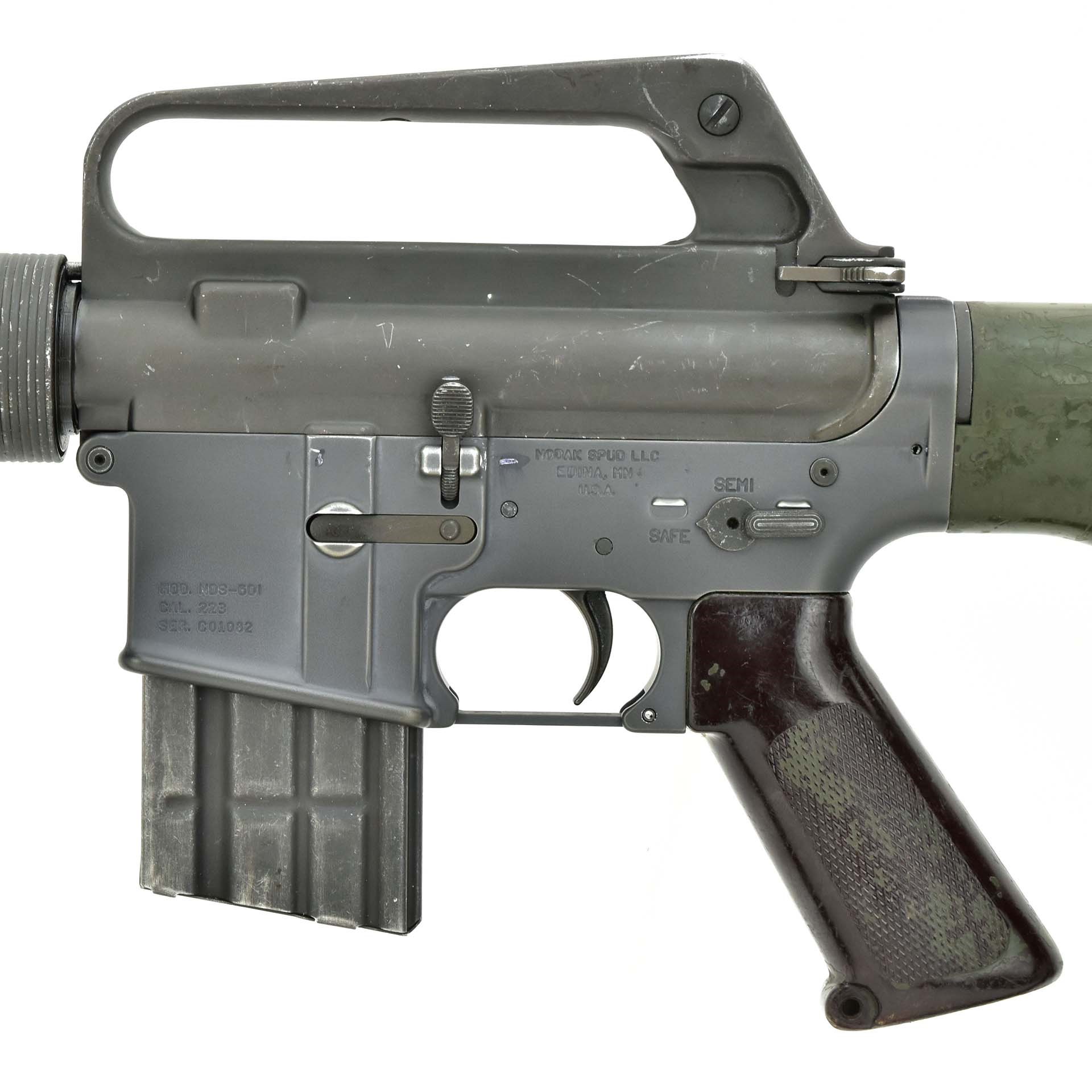 They were distributed among several ARVN units with American advisors and carried into the field to be used against the Việt Cộng. The comments that came back from the advisors were “extremely favorable” of the Model 601 and the lethality of the .223-Rem. cartridge. One report related an encounter between ARVN Rangers and three Việt Cộng insurgents in heavy jungle on June 16, 1962.

One of the Rangers fired a burst from his 601 at one of the VC, hitting him with three rounds at a range of only 15 meters: “one round in the head took it completely off – another in the right arm, took it completely off, too – one round hit him in the right side, causing a hole about five inches in diameter.” Although lurid, this account testifies to the unforgiving ballistic effectiveness of the 601’s 1:14” twist rifling, but that twist rate went away with the 601, never to return. 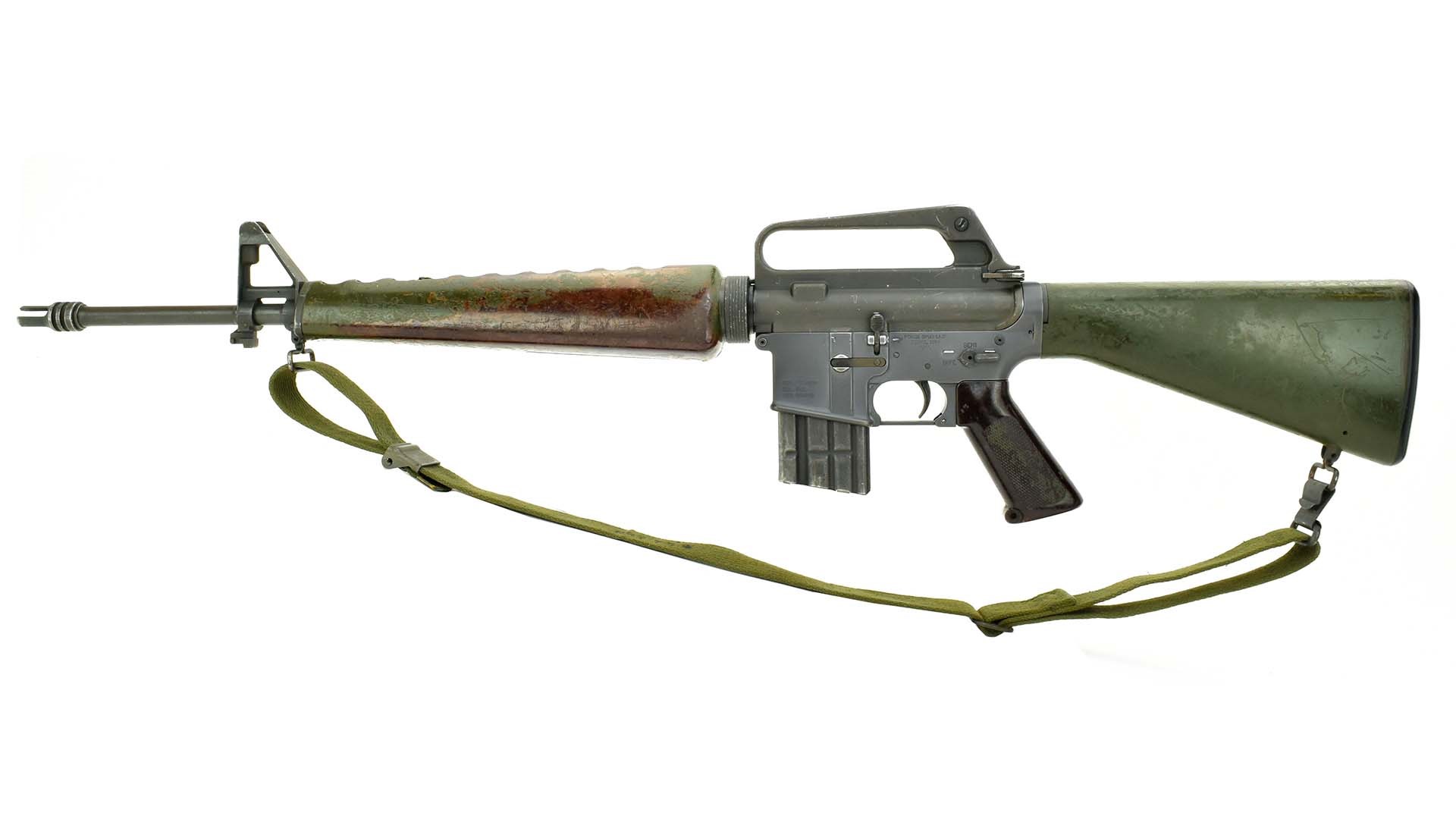 The finished rifle as seen from the left side. Photograph by Jeff Hallinan of Collectors Firearms in Houston, Tex.

Today, 1:14 barrels are quite hard to come by, so the fact that the Puerto Rican 601 kits came with complete barreled upper receiver assemblies was quite exceptional. Since Puerto Rico is a part of the greater United States, the kits could keep their barrels. If the kits had come from outside of the United States, it would not have been possible for the barrels to be included, so this opportunity was a rare one indeed.

And as kit-build clone rifles go, this one could not have been easier. All I had to do was call Harlan at NoDak Spud, LLC to order one of their 601-style retro semi-automatic lower receivers, and then source a trigger guard. Once everything was in, it was simply a matter of assembly. The rifle went together nicely, and while the color difference between the upper and lower is noticeable, it’s not garish or distracting. I chose to go with the “Battlefield Pick Up” distressed option for my NoDak retro 601 lower, and it is a good thing I did because of the extensive visual wear and tear on the rest of the gun. 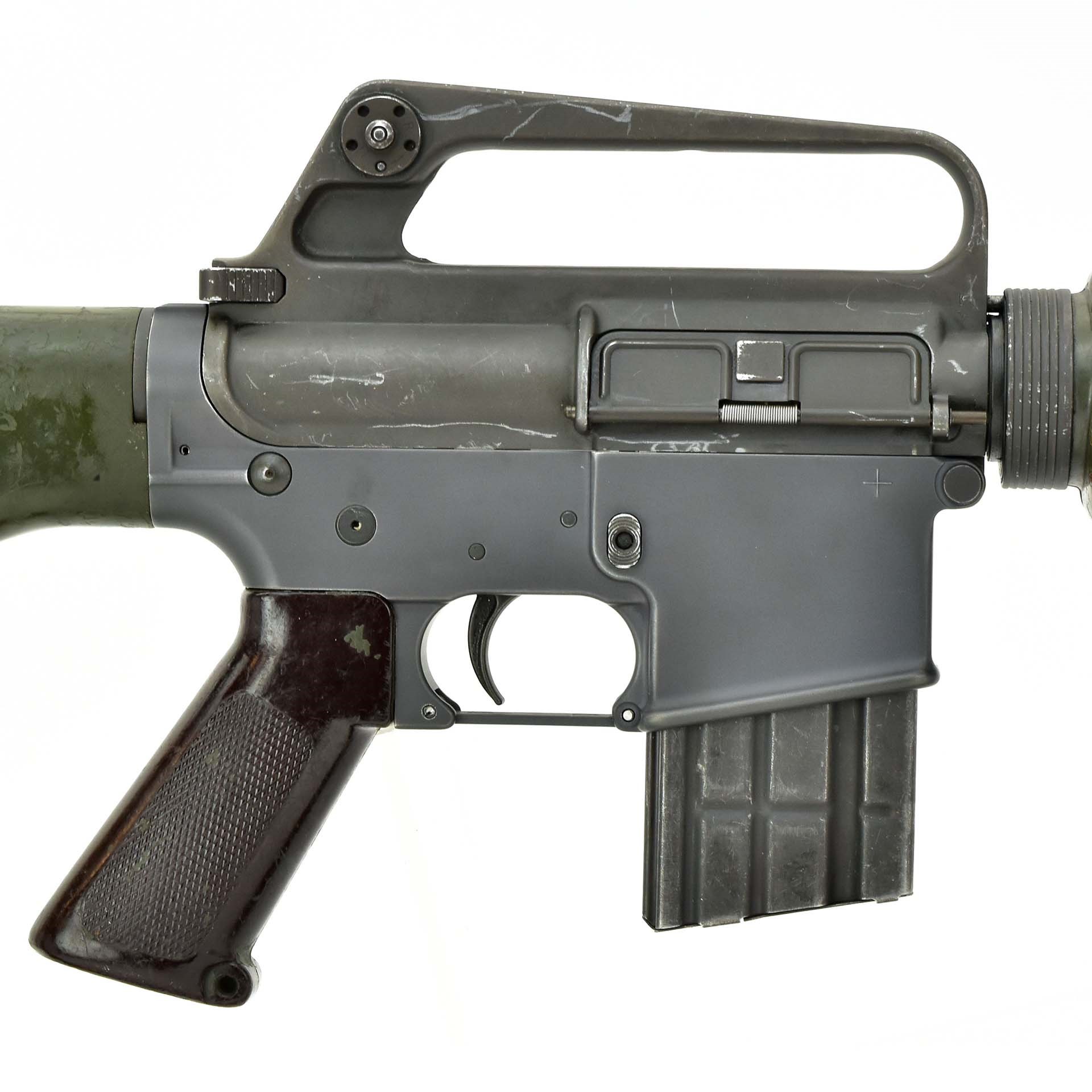 A closer look at the “Battlefield Pick Up” NoDak retro 601 lower on the finished rifle from the right side. Photograph by Jeff Hallinan of Collectors Firearms in Houston, Tex.

While it may not be pretty, everything in the kit was in good working condition and each individual part was a bit of a lesson in the history of the AR-15 platform. The presence of an Edgewater buffer, for example, brought on a meditation about the reliability problems that the XM16E1 and the M16A1 would ultimately experience in 1966 and 1967. These were problems that were brought on by the introduction of a new propellant that caused higher chamber and gas-port pressures and, consequently, an increase in cyclic rate of fire. The new buffer that Colt introduced to solve the problem remains in use in the M16A4 today.

The slick-sided chrome bolt carrier also provides a reminder that, once upon a time, the AR15 did not have a forward assist device, so the bolt carrier did not need forward assist serrations. The presence of a heavy flathead firing pin and a bolt catch without the raised manual tab provide reminders that minor product improvements would also become a part of the history of the AR-15 and M-16 series. The kit’s dimpled front and rear take-down pins, and dimpled selector present a unique appearance with a bit of flair that you just do not get with the no-frills non-dimpled pins that eventually become a trademark characteristic of the later XM16E1 and M16A1. 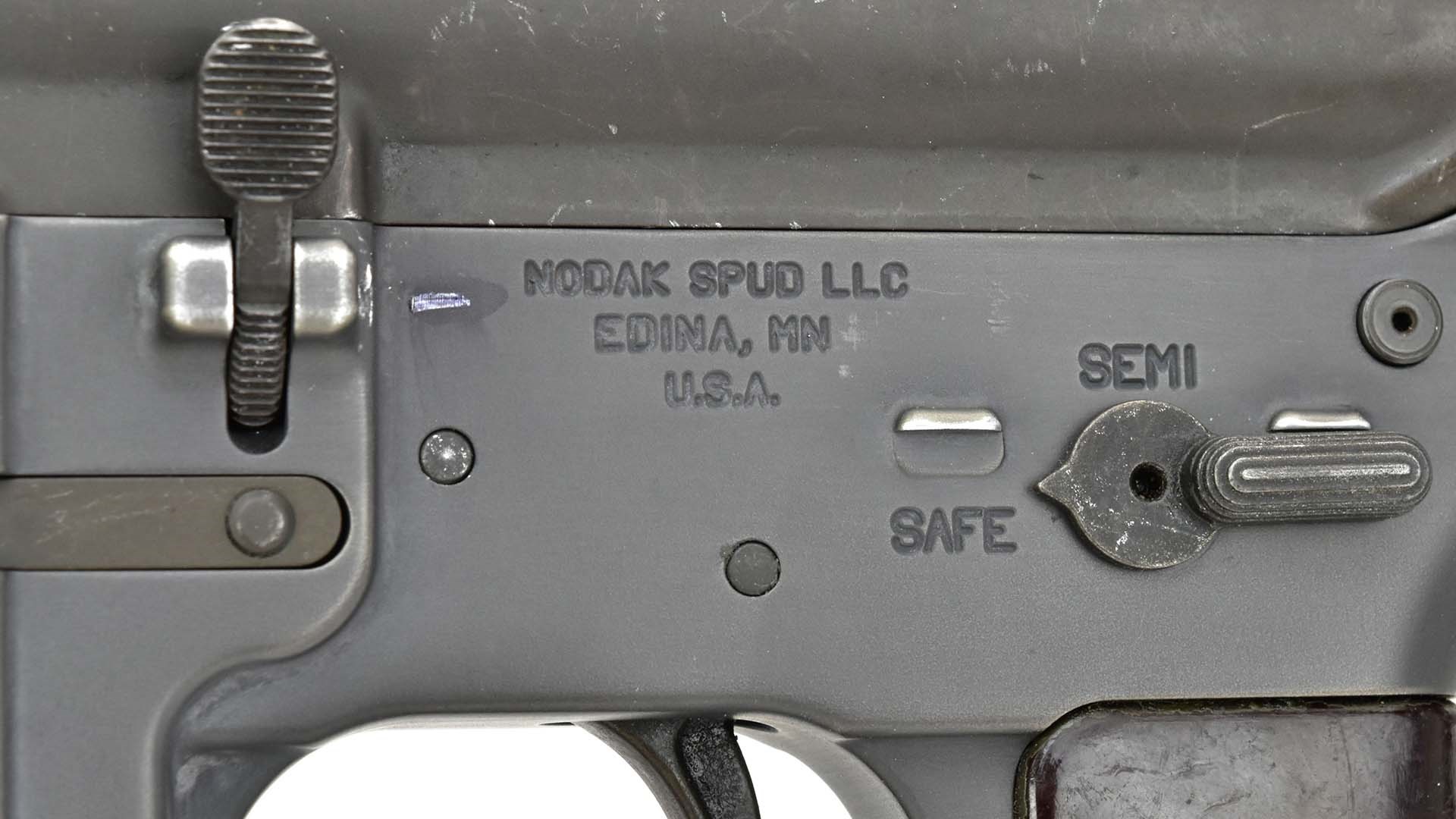 A closer look at the “Battlefield Pick Up” NoDak retro 601 lower on the finished rifle. Photograph by Jeff Hallinan of Collectors Firearms in Houston, Tex.

In other words, almost every item that came in the kit can be recognized as a part of the evolution that eventually delivered the M16A4 rifles and M4 Carbines that are so omnipresent in the landscape today. The fact that this evolution started more than six decades ago with the Model 601 is just the kind of thing that will make a true AR-15 enthusiast drop what he is doing and take notice. But even if you are more of an AK person, it is still impossible to ignore the historical significance of the 601.

While it did not write itself into the pages of small-arms history as meaningfully as the models that would follow it did, the Model 601 nevertheless points back to where it all began. In the era of battle rifles chambering the 7.62×51 mm NATO cartridge, along came the lightweight but lethal Model 601 to disrupt everything. It armed ARVN Rangers, MACV advisors, U.S. Air Force Security Personnel and Navy Seals. It is the early ancestor of the M-16s that are still with us today, and the fact that this particular example went to the Puerto Rico Police Bureau meant that it would be preserved long enough to become eventually a Title 1 semi-automatic rifle under my stewardship. I hope to one day pass it on to someone who appreciates it as much as I do.

What's the Benefit of a Lightweight Rifle?

Quantum Cloning: A Colt Model 601 Brought Back To Life