Imported by Blue Line Solutions of Ferndale, Wash., one of the most affordable pump-action shotguns available today is simply called the Blue Line Pump. The manual gets a little more specific with a Model PD 18 SB designation. If it looks familiar, perhaps it is because the gun is a dimensional clone of the venerable Remington Model 870, save for the lines of the trigger guard. That is likely because any patent protections that existed on the Remington Model 870 have long since expired; after all, the design has been around since 1950.

With the exception of the contours of its trigger guard, the Blue Line Pump is a functional clone of the Remington 870 Express Synthetic Tactical.

The Blue Line Pump, made by Hawk Industries in China and chambered in 12 gauge only, is a slide-action shotgun that employs dual steel action bars to link the matte-black, polymer fore-end to the steel bolt carrier. The blued steel bolt itself locks into a recess in the barrel extension. Inside the matte-finished steel receiver, a two-piece ejector spring is mounted to the left wall. On the bolt face’s right is a single hook extractor. While the edges of the ejection port might be considered somewhat sharp, the surfaces on the loading port on the receiver’s bottom where they engage the user’s fingers have received a radius cut that makes loading easier and more comfortable. Capacity is five rounds of 3″ 12-ga., shotshells or six with the shorter 2¾” shells.

A brass bead is affixed atop the matte-finished steel barrel’s muzzle, and the shotgun features no provision for adding choke tubes to its 18.5″ barrel. We measured the fixed choke at 0.729″, which is cylinder bore, and the internal barrel diameter remains consistent for its entire length.

Sights on the shotgun consist only of a brass bead at the end of its unthreaded muzzle.

The gun’s buttstock is black polymer with shallow checkering on both sides of the wrist; there is also an austere rubber recoil pad at the rear measuring 1.2″ deep. A sling swivel stud is provided at the base of the butt, while another is located on the front of the magazine tube cap. The finish on exterior metal surfaces was utilitarian, yet even.

On the aluminum trigger guard’s left side, where it joins the bottom of the loading port, is a stamped-steel action-release button. Depressing this control frees the fore-end to move rearward, unlocking the action. A trigger-blocking safety is at the rear of the fire-control assembly—pushing it from right to left reveals a red ring on the left side when in the “off” position.

The fire-control group is retained by two transverse pins that are of different diameters; the small one goes in the front. By drifting both out, the trigger guard can be withdrawn from the bottom of the receiver. Examining each of its parts revealed the assembly to be a faithful copy of the 870’s mechanism, except for the more square lines of the trigger guard itself. 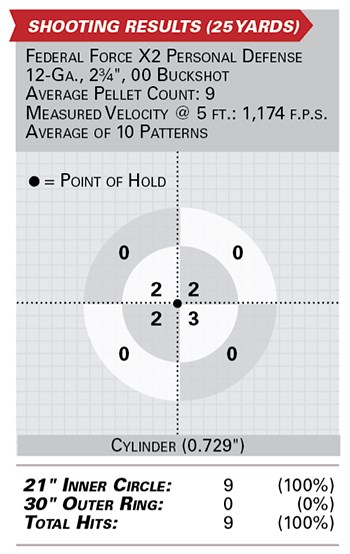 The Blue Line Pump appears to be based on the 870 Express Synthetic Tactical specifically, so other more-common 870 barrels did not interchange with the test gun. That said, buttstocks and fore-ends can be changed out for aftermarket accessories.

Our test sample of the Blue Line Pump was fired at informal clays (as some of the local ranges where we typically test shotguns don’t allow the use of 18½” barrels), as well as in tactical drills with 2¾” buckshot. All told, we fired just more than 300 rounds through the gun, including loads from Federal, Fiocchi, Hornady and Remington.

Shot sizes ranged from 00 buck to No. 7½ and both 2¾” and 3″ shells were loaded in random order in the tubular, under-barrel magazine—all with no malfunctions. The Blue Line Pump was pattern-tested with buckshot at 25 yards, and the results can be found in the accompanying table.

As affordable pumps go, this gun has all the basics for its intended home-defense or plinking roles. As our testing determined, no-frills can be compatible with reliability. Although only the one SKU is offered at this time, Blue Line Solutions advises that more options are coming soon, including barrels that accept RemChoke-pattern tubes, more barrel-length options and even wood-stocked versions.