Iver Johnson, the man, was born in Norway in 1841 and became a gunsmith in 1857 before immigrating to Massachusetts in 1863. After a stint building pepperbox pistols for Allen & Wheelock, he founded his own company which gained notoriety for its inexpensive revolvers.

The original company closed its doors in 1993, but another firm took up the Iver Johnson mantle in 2006 as an importer of shotguns, derringers and M1911-style pistols. The new Iver Johnson Arms imports a variety of M1911A1-style pistols in a wide assortment of colors and styles.

Suppressor-height XS Big Dot sights are dovetailed to the slide, and a knurled cap protects the threaded barrel.

Our test sample for this review is the Eagle LR Special, manufactured in the Philippines by Shooters Arms Mfg. It is a 70-series M1911, as are all of Iver Johnson’s models, and it’s a Government Model-size gun chambered in .45 ACP. This particular pistol includes an M1913 Picatinny rail on the dustcover, a threaded barrel and suppressor-height XS Big Dot sights for speedy target acquisition.

The slide is machined from 4140 bar stock, while the frame is a 4140 casting machined to final shape with a CNC machine. The barrel is also composed of 4140 steel. Iver Johnson coated the frame with Midnight Bronze Cerakote, while the slide has a classic blued finish. We found the coating to be well-applied and visually striking.

Angled cocking serrations front and rear, a long trigger, an extended and threaded barrel, and an accessory rail on the dustcover set the Eagle LR Special apart from basic versions of M1911-pattern pistols.

At 43 ozs. unloaded, the Eagle LR Special is not a lightweight gun, with the extra mass immediately making itself known in the hand. The pistol is 9.5″ long, 5.5″ tall and 1.3″ thick, and its 5.75″-long barrel is threaded .578×28 TPI. We checked the threads for straightness and concentricity, and found them to be within tolerances for suppressor use.

The pistol has a lowered and flared ejection port, enlarged slide stop lever and a slightly beveled magazine well. The safety is only on the left side of the frame, primarily making it a right-handed pistol. There are tight, but effective, front and rear slide serrations measuring 0.07″ point to point. The Eagle LR Special comes equipped with thick Dymondwood stocks, which is a wood laminate material suited for foul weather. The backstrap features vertical serrations, while the frontstrap has no texturing at all.

The single-action trigger, as tested with a Timney Trigger Pull Gauge, measured a consistent 5 lbs. with a short take-up and fairly crisp break. The break is not “glass rod” crisp, but feels acceptable for a factory M1911 not designed for winning matches.

Fieldstripping, which requires that the barrel be withdrawn through the front of the slide, reveals the pistol’s conventional construction.

Upon disassembly, we took note of the machine work performed on the slide, frame and barrel. There are some light machine marks present on the inside of the slide, but nothing we would consider excessive or out of the ordinary. The interior of the slide was slightly too thick, which made removing the barrel for cleaning uncharacteristically difficult. We noticed several friction marks where the Midnight Bronze finish of the frame rubbed onto the barrel.

Because the Eagle LR Special is a service-size semi-automatic, we did our accuracy testing at 25 yds. All groups were fired from a seated position, resting the pistol’s dustcover on a Caldwell Pistolero for support. The XS Big Dot sights are not precision sights, which made a consistent sight picture at 25 yds. somewhat difficult, yet we were still able to shoot some very respectable groups with the Eagle LR Special. Straight from the box, point of impact was slightly to the left of point of aim.

For ammunition, we tested Winchester Service Grade 230-gr. FMJs, Speer Gold Dot 230-gr. JHPs and Federal Hydra-Shok 230-gr. JHPs. The best groups came from the Winchester ammunition, which averaged 1.64″ for five groups, with the smallest measuring 1.12″. The five-shot, five-group average across all three loads came to 2.12″—a laudable result for a handgun at 25 yds. using iron sights.

Over the course of 250 rounds fired, the Eagle LR Special produced zero malfunctions of any kind. The gun is supplied with two eight-round ACT-MAG magazines, and we also tested it with a Wilson Combat eight-round model. 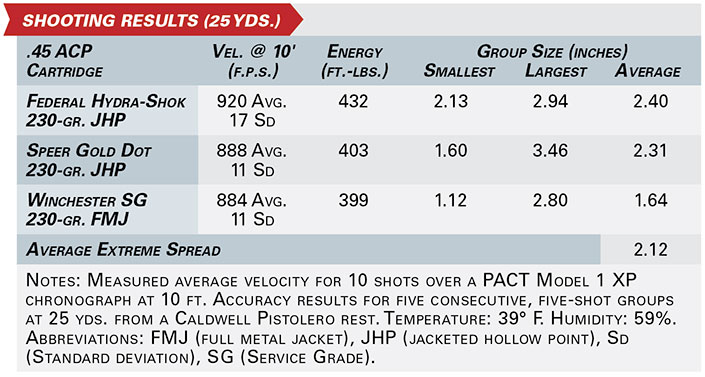 While M1911 purists may scoff at the modern features, the Iver Johnson Eagle LR Special appears to be a solid entry into the tactical M1911 market for shooters with an eye on their budget. Accuracy was quite good for a combat-oriented pistol, and the XS Big Dot sights contributed to rapid target acquisition up close. The combination of an extended slide stop and beveled magazine well made for a smooth and easy reload. In all, it’s a very shootable pistol, and a solid modern take on the venerable M1911. 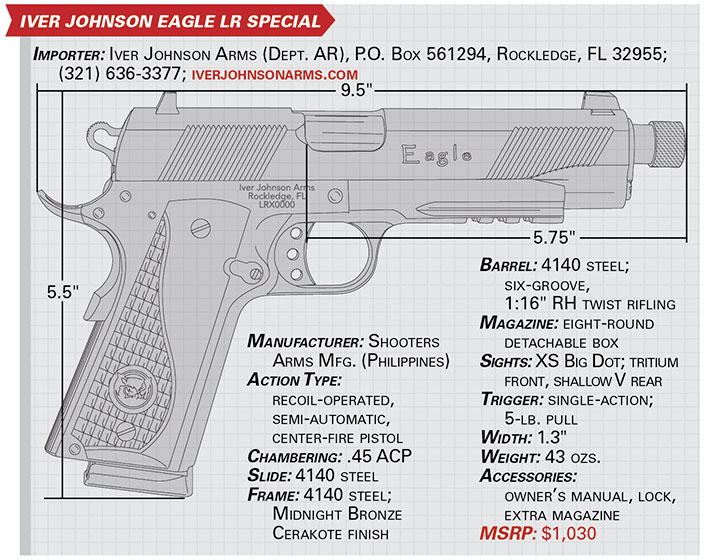