The popularity of small-caliber pocket pistols chambered in .25 ACP and .32 ACP has waned considerably in recent years due to an ever-growing selection of sub-compact models chambered for larger cartridges, including 9 mm Luger and .380 ACP—a transition that occurred, in part, due to the 2008 release of Ruger’s Lightweight Compact Pistol (LCP). This single-stack semi-automatic, chambered in .380 ACP, received a variety of upgrades back in 2016, resulting in the release of the LCP II, which remains a top seller for the company to this day.

Despite the 9 mm pocket pistol’s rise to prominence, there is one “mouse-gun” cartridge that has yet to slip out of vogue, the .22 Long Rifle. While this beloved rimfire doesn’t yield an optimal level of stopping power, it is nevertheless a ubiquitous cartridge that is far less expensive than center-fire pistol counterparts. But its most attractive feature is the low level of felt recoil it produces in small guns, making it easy and pleasant to shoot during practice.

The LCP II Lite Rack disassembles by way of a removable pin. A single round-wire coil spring rides on a one-piece steel guide rod. Note the contouring of the barrel’s hood and its bell-shaped muzzle.

Recognizing that devotees of the LCP II platform were looking for a less-expensive means of practicing at the range and a familiar platform for casual plinking, Ruger released a new take on the pistol in 2020, the .22 Long Rifle-chambered Lite Rack. In addition to producing notably reduced levels of felt recoil, this model has a slide that’s easier to cycle manually and two safety features not found on the .380 ACP versions.

Like the center-fire options, the LCP II Lite Rack is hammer-fired; however, it differs in that it is blowback-operated. The external features and footprint are nearly identical to those of the center-fire models, though, which means it will fit into a variety of existing holsters and carry systems. The through-hardened, blued steel slide features fixed sights milled integrally into the slide and angled cocking serrations at the front and rear. The 2.75″ satin stainless-finished barrel features six-groove, 1:16″ right-hand rifling and a beveled contour to the top and side edges of the hood. The one-piece, full-length, carbon steel guide rod is fitted with a single round-wire recoil spring. 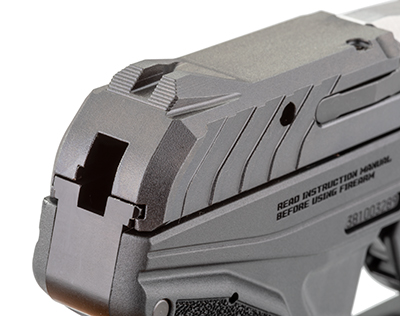 The LCP II Lite Rack rimfire is an internal-hammer design in which the hammer itself is fully shrouded. Note the integral rear sight.

The slide is supported by a pair of 3.3″ rails milled into an aluminum chassis that also houses the trigger group and upper controls. The internal chassis is molded into the black, glass-filled-nylon frame. The frame’s dustcover is rounded, while the trigger guard is squared-off with the flat front face textured to serve as a finger rest. The grip frame has panels of moderate, molded-in texturing on all four sides.

The pistol’s takedown pin is located on the left side of the frame, along with the slide catch and magazine release. The catch locks the slide open when the last shot is fired, and the metal magazine-release button is located just behind the trigger guard for easy access with the shooting-hand thumb. This model ships with one single-stack, 10-round, steel magazine made possible by a slightly extended baseplate.

Two safety features have been added to this pistol that are absent on the .380 ACP. Directly behind the slide catch on the left side of the frame is a metal thumb-safety lever. Instead of swinging up and down like many pistol safeties, this one slides straight back into the Safe position. Pressing it forward into the Fire position reveals a clearly visible, bright-red dot on the frame. The safety lever is small, unobtrusive and easy to maneuver. This pistol also has a magazine disconnect; when the magazine is removed from the grip, the trigger locks up to prevent the gun from firing.

When using a rimfire pistol as an understudy to a defensive handgun, it’s important that the gun provides a comparable sight picture and trigger pull. Some rimfire pistols fail to replicate these features adequately for useful training, however, the Lite Rack successfully duplicates the fixed sights and trigger pull of the .380 model. All LCP II pistols, including this one, employ Ruger’s Secure Action integral-safety trigger.

The polymer trigger has a smooth, clean feel with a short reset. The trigger of the gun tested measured 5 lbs., 4 ozs. using a Lyman digital trigger gauge. The overall fit and finish of the Lite Rack is the same as other LCP II options, which is to say, up to Ruger standards throughout. The only noticeable differences when shooting this pistol are the increased number of rounds in the magazine and the reduced recoil.

Small rimfire pistols like this one have a reputation for being unreliable. This is due to the wide variety of .22 Long Rifle bullet weights, velocities and brands of ammunition available. Remember that this is a rifle cartridge intended for barrels of 16″ or longer; pistol-length barrels simply don’t provide the burn time for the rifle powders these cartridges use. 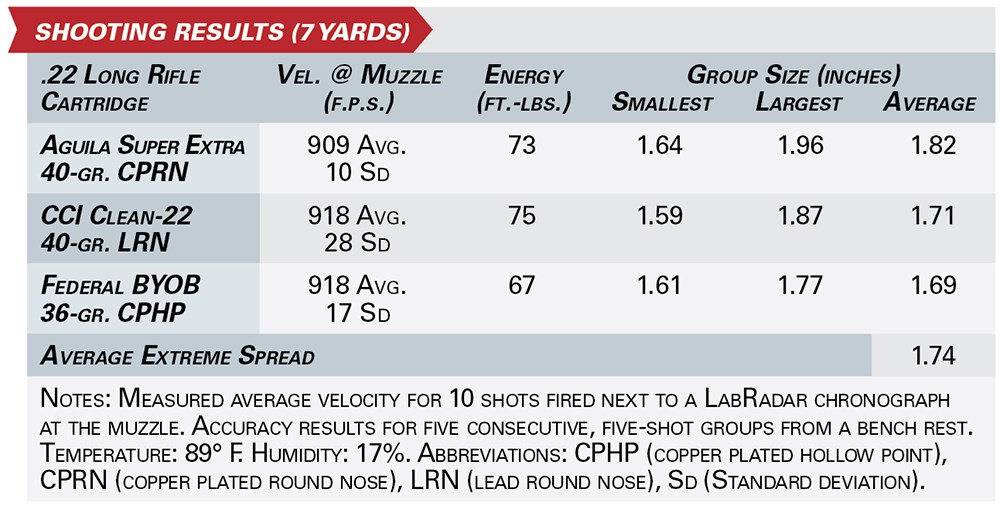 According to Ruger, the optimum ammunition options for the LCP II Lite Rack include high-velocity loads topped with 40-gr. bullets. More costly hyper-velocity loads will work, but there is little in the way of velocity gain for the added expense. Cartridges with lighter bullets or slower muzzle velocities—such as the Federal 36-gr. load used for formal accuracy testing—can cycle the slide, but figuring out which off-spec loads will work consistently in your pistol will require time at the range testing each of them. The LCP II tested for this review proved to be quite reliable using three factory 10-round magazines. It experienced one failure to feed in the first 100 rounds fired but otherwise operated without any other issues for hundreds of rounds fired.

The Ruger LCP II Lite Rack is clearly intended to serve as an understudy for the .380 ACP version. It fills that niche well with its easy-to-operate controls, reduced levels of felt recoil and lower ammunition cost. But this little pistol is certainly not limited to just punching paper at a square range. Its sub-compact size and light weight—along with a suggested retail price of $349, or real-world prices around $300—make it an ideal outdoor kit gun and a handy option for close-range pest control. 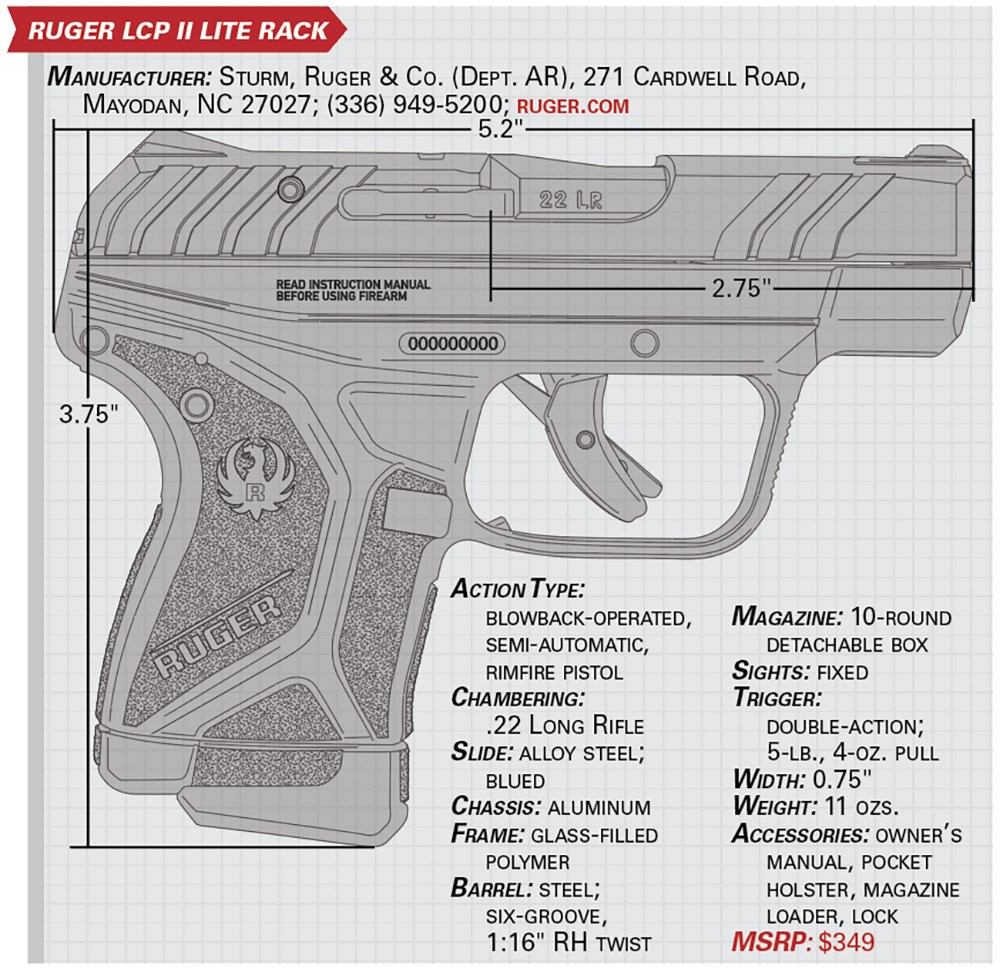 Why You Need to Form Good Shooting Habits