October 3, 2022 Guns In The News
Home»Politics»Senator Kamala Harris Attacks Second Amendment: “Assault Weapons Should Not Be Walking The Streets Of A Civilized Country”
Politics

Senator Kamala Harris Attacks Second Amendment: “Assault Weapons Should Not Be Walking The Streets Of A Civilized Country”

Former California Attorney General turned US Senator Kamala Harris continues her attack on the Second Amendment and in her latest comments she claims that “assault weapons” “shot not be walking the streets of a civilized country.”

On Monday, Sen. Kamala Harris (D-CA) said on Power 105.1 FM’s “The Breakfast Club” that she wanted to help get people elected during the 2018 midterms who possessed “the courage” to push for more gun confiscation “laws.”

“In this discussion, when we are talking about school safety, there are things we need to address that include thinking about why this is an issue,” she said.  “And part of it is that we have not passed meaningful, smart gun safety laws in this country.”

That’s because there is no “smart gun safety laws.”  All “laws” that seek to restrict or regulate the God-given right of law-abiding citizens are not only dumb but criminal under our Constitution as Congress has been given zero authority to write legislation that does that.

In fact, that is part and parcel of what it means in the Second Amendment that the right to keep and bear arms “shall not be infringed.”

“Let’s talk about how the NRA has grabbed people by different parts of their body and caused people to have a lack of courage,” she continued.  “Again, another false choice. I’m in favor of the Second Amendment, and I also want smart gun safety laws. Assault weapons should not be walking the streets of a civilized country. We should have universal background checks.”

OK, back the truck up.  Since when did the National Rifle Association

grab people by “different parts of their body” and cause them to have a lack of courage?  If anything, perhaps they might have provided a little courage to some who already support the Second Amendment, something that Ms. Harris clearly does not do.  While the NRA has a history of compromising our rights, I would have to say they have also helped many to stand for those God-given rights protected under the Second Amendment.

Perhaps, if Senator Harris actually had some courage rather than a criminal mindset to attack the Second Amendment and the rights of the people she represents, she might actually do her job and uphold and defend the Constitution, which she took an oath to do.

One cannot be in favor of the Second Amendment as written and at the same time want “smart gun safety laws.”  You simply are being dishonest.

Furthermore, universal background checks are the result of failing to carry out justice on violent criminals who should have been put to death.  People who engage in embezzlement or fail to pay child support or things like that don’t deserve a death penalty nor do they deserve to have their God-given right to keep and bear arms removed.  Those people should be required to either pay back what they took with interest or pay what they owe.  Those are just a couple of examples where government infringes on rights they should not be infringing on.

Additionally, there are two things that should be pointed out here.  One, no weapon “walks the street.”  They don’t possess legs to do so.  They don’t fire themselves either and take peoples’ lives.

Second, I would not mind if people did walk around with their ARs or AKs strapped to their back.  However, for the most part, you just don’t see that taking place in the US, except maybe in Texas.

Third, an armed society spends its time stopping evil not contemplating it.

Fourth, the militia, which is the first part referenced in the Second Amendment, is made up of the individual people mentioned in the second part, who are the ones who possess the right to keep and bear arms.  Those arms are clearly for battle or war, as they are “necessary to the security of a free state.”  They are to be in the hands of the people, not necessarily the hands of unconstitutional federal agencies.

Finally, the only people I have seen patrolling America’s streets with semi-automatic rifles, which Harris wrongly calls “assault weapons,” are police officers.  I don’t hear her calling for these weapons to be taken out of government hands, do you?  I don’t hear her calling for the Bureau of Land Management, the Social Security Administration, the Internal Revenue Service, Homeland Security, Border Patrol, or a host of other alphabet agencies to have these semi-automatic rifles removed from their possession, do you?  What do those agencies need those weapons for in the first place?  After all, not one of them is mentioned in our Constitution.  Any enforcement of the laws of the union is to be performed by the militia at the urging of Congress and the direction of the president (Article 1, Section 8, Clauses 15 and 16).

Nope, and why not?

It’s because she is a totalitarian!  Don’t let her tell you otherwise.

Harris went on to state, “We have had all these tragedies. And I’ll say to you, we don’t need another tragedy to act. We have got a good list of tragedies. So it’s not like we are waiting for the tragedy to act. We have that. We are not waiting for good ideas. The good ideas have been had—universal background check—we need an assault weapons ban. The missing ingredient to get something done is for Congress to act, bottom line. And that’s where I would say, OK what can we as people who want to encourage Congress to act do?  What can we do? Let’s focus on the 2018 elections. Let’s focus on electing people who have the courage and getting rid of people who don’t.”

Well, as has been pointed out, we’ve had background checks.  That doesn’t stop criminals from committing a crime with a gun.  Exhibit A is the Texas church shooter.

We’ve had an “assault weapons ban” and it didn’t drop crimes committed with gun one bit.

So, those are not “good ideas.”  They’re moronic and criminal as they are tyrannical and infringe on the rights of the people.

Background checks are essentially an undermining of our belief that a person is innocent until proven guilty.  The background check assumes you are guilty and demands you prove your innocence before acquiring a gun.

Harris is merely continuing to push the Marxist agenda of gun confiscation because with each pretended and unconstitutional legislation that comes down from people like Harris, come consequences to law-abiding gun owners.

It’s time someone in Congress had the courage to call out people like Kamilla Harris for what they really are:  Marxist-Communists.

Nope, YETI Didn't Cut Their Ties With The NRA - They Just Stopped A Program

Senator Kamala Harris Attacks Second Amendment: “Assault Weapons Should Not Be Walking The Streets Of A Civilized Country” 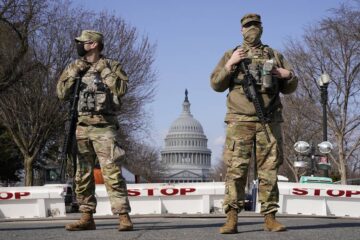