August 17, 2022 Guns In The News
Home»US News»Study Shows No Correlation Between Violent Crime and Gun Laws
US News

After every mass shooting, you can expect the gun control crowd to make the same exact argument that they’ve been trying to make for decades. They will tell you that in every country with limited access to firearms, there are fewer firearm related deaths, both by homicide and by suicide. In most cases this is probably true, with the exception of a few crime ridden hell holes that would probably have a high crime rate, regardless of how many guns are legally available.

However, this fact completely misses the point, and I’m baffled that they can make same argument over and over again with a straight face. What really matters is the overall violent crime rate. Does restricting gun ownership reduce the number of all murders, or does it just reduce gun related crimes? There is an important distinction between the two, because if you only care about stopping crimes that involve guns, then you’re basically saying that you want to outlaw guns because they’re scary. You’re not addressing the root cause of society’s problems.

So what if we took a look at how effective our gun laws have been? What if gun laws actually reduced the number of people who are murdered by any means? That would certainly support the arguments made by gun control advocates. Unfortunately for them, the numbers don’t add up in their favor.

According Eugene Volokh with the Washington Post, when you look at the numbers, there is no statistical relationship between the gun laws of any given state, and the number of murders they have on a regular basis. Volokh decided to do a comparison between the homicide rates of every US state including Washington DC, and the grades given to these jurisdictions by the Brady Campaign to Prevent Gun Violence. One is a number based grade with a higher number indicating that the state has tough gun laws, and the other is a typical A-F Grade.

Volokh even went so far as to include accidental gun deaths into the homicide rate, just for good measure. However, he found no relationship between homicides and gun laws. The numbers were all over the map. 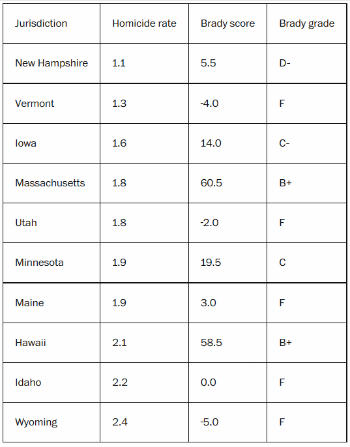 Now the ten highest-homicide ones: 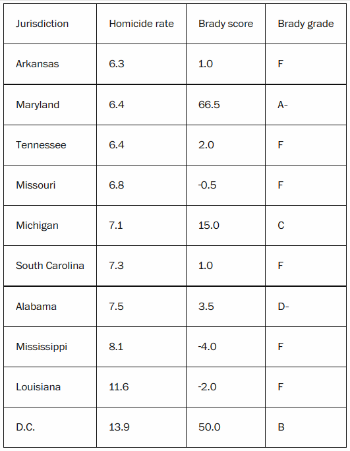 What’s especially interesting is that these numbers don’t seem to do any favors for pro-gun states either, though he found that states with tougher laws have a slightly higher than average murder rate. However, he found the difference to be minuscule. Volokh admitted that correlation isn’t the same as causation though, and theorized how these numbers might be related.

Perhaps there are other confounding factors (such as demographics, economics, and so on). Perhaps even controlling for those factors, there will be other missing factors that are hard to control for — for instance, maybe as the crime rate increases, calls for gun controls increase, so high crime causes more gun restrictions, or maybe calls for more freedom to defend oneself increase, so high crime causes fewer gun restrictions (e.g., liberalized concealed-carry licensing rules). And of course when small changes in the model yield substantial changes in results (e.g., if you calculate the state gun scores differently, the results will likely be different), you know how little you should credit the output. Figuring out the actual effect of government actions, whether gun laws, changed policing rules, drug laws, or anything else, is devilishly difficult.

Point being, there really isn’t any evidence that gun laws have any effect on the murder rate, and it’s irresponsible for gun control advocates to claim otherwise. In all likelihood there are probably numerous factors, both economic and social, that lead to more violent crimes. If we want to stop these crimes, we have to address society’s problems instead of forfeiting our rights.