The military firearms produced for the government of the Third Reich are generally recognized as being some of the finest of World War II. On the one hand, that is certainly true when you consider German innovations like the general-purpose machine gun, the intermediate cartridge, and the roller-delayed blowback operating system. But when the demand for resources began to outpace the available supply, Germany eventually had to cut corners like everybody else.

The ongoing development of small arms over the course of the conflict therefore became a process of not just building better guns, but also building them as economically as possible. By late 1944, the Third Reich had to confront certain emerging realities about manpower as well. After staggering battlefield setbacks in North Africa and the Soviet Union in 1943, and the retreat on all fronts that began during the summer of 1944, the time had come to mobilize the element of Germany’s male population that was not already in uniform. 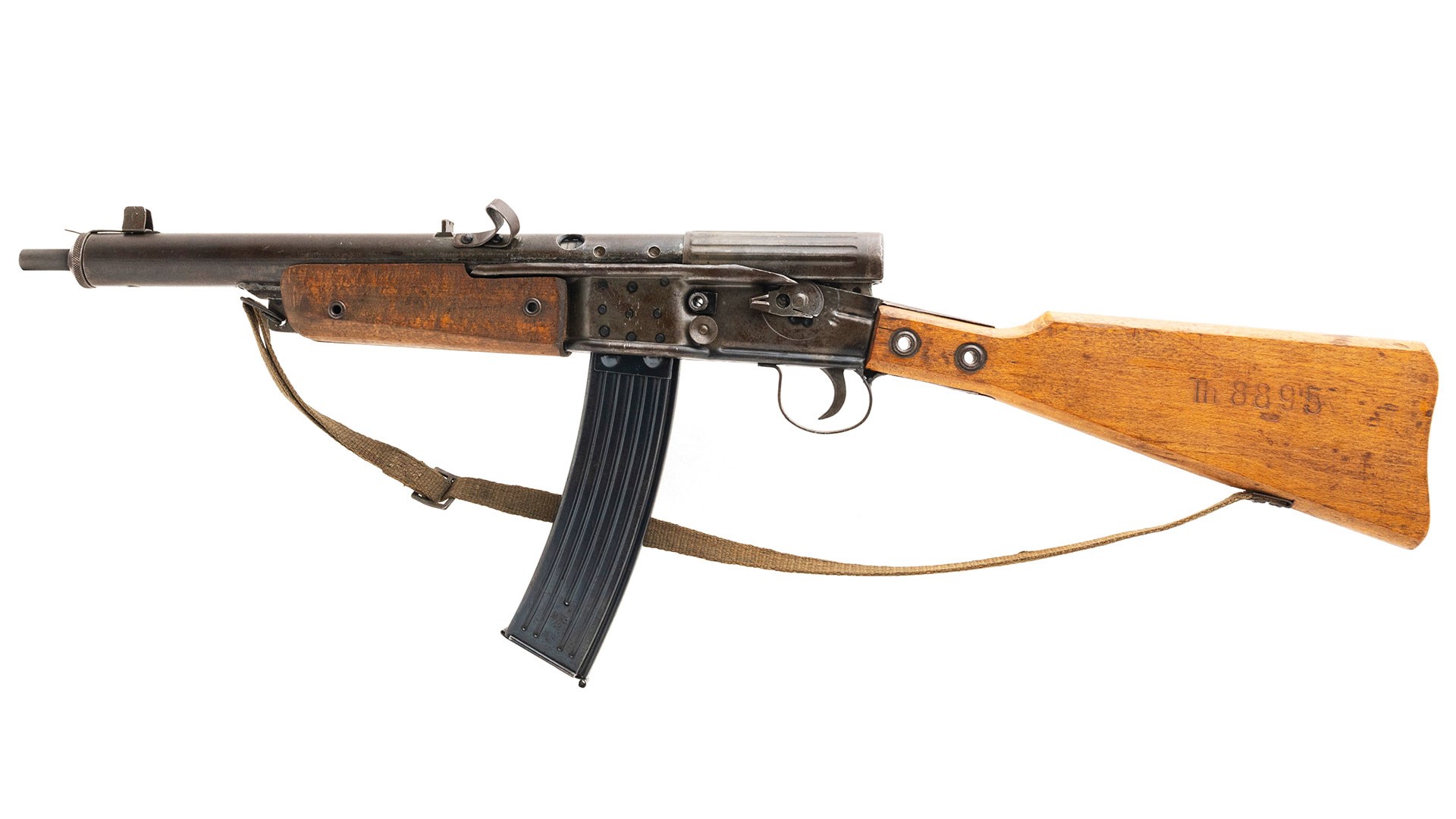 Accordingly, in September 1944, Adolf Hitler authorized the establishment of a national militia called the Volkssturm, and he did it just as the U.S. 12th Army Group began its attack on the Siegfried Line. German boys and men between the ages of 16 and 60 years were conscripted into the Volkssturm–some of them having been previously rejected for military service, and many of them being convalescent veterans. They were organized into battalions and lightly armed with the infamous Panzerfaust to fight Allied armor and an assortment of substitute standard small arms to fight Allied infantry. 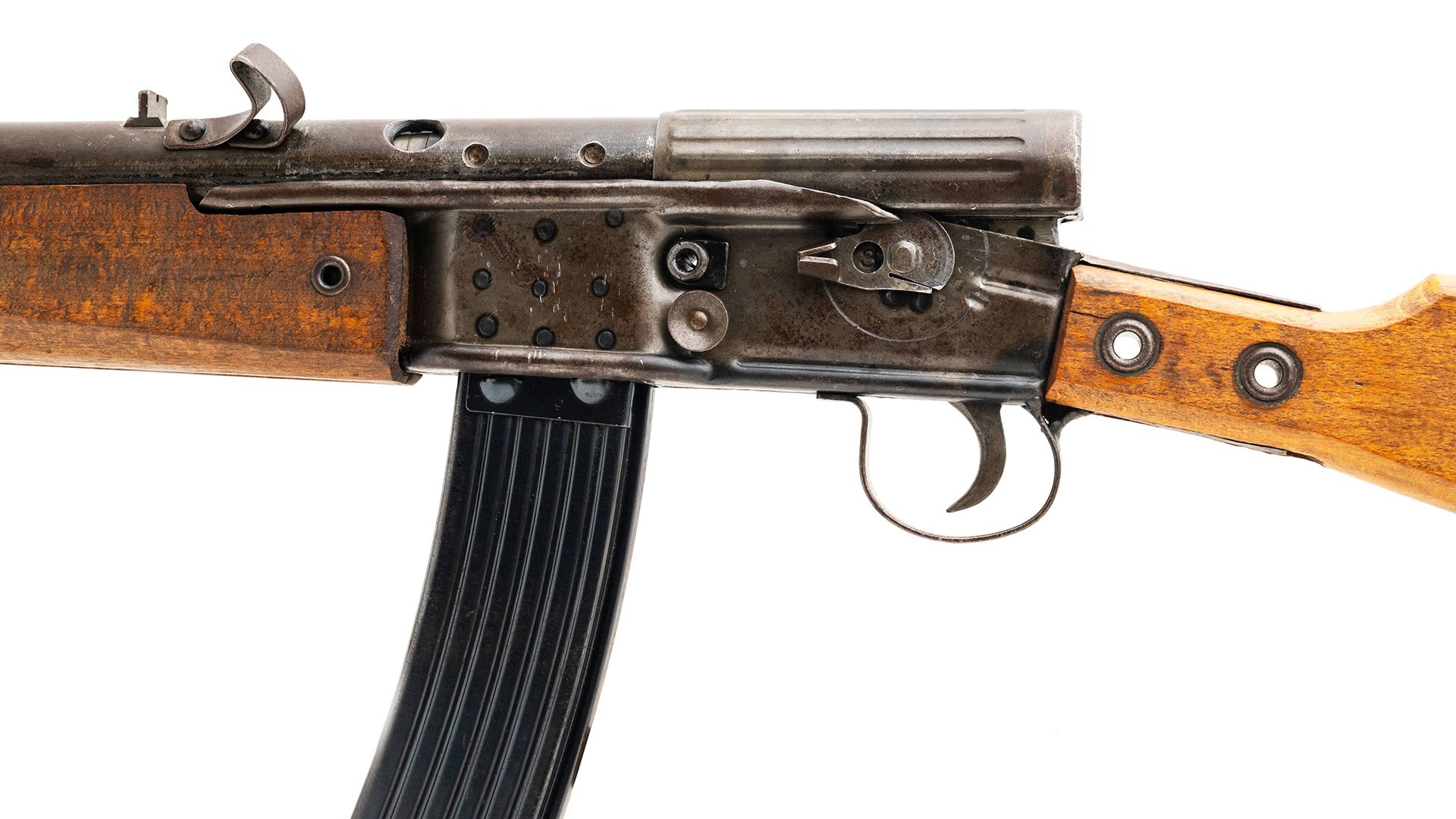 Although Germany maintained a significant stockpile of older service rifles like the Gew 98, as well as battlefield-captured foreign rifles, a need still existed to arm Volkssturm troops, so the Primitiv-Waffen-Programm was created. This program developed the kind of simplified firearms needed at this late stage of the war, including a German copy of the STEN submachine gun designated MP3008 Volksmaschinenpistole. In addition to conventional “last ditch” type bolt-action rifles, the Primitiv-Waffen-Programm also introduced a decidedly unconventional self-loading rifle designated the VG1-5. 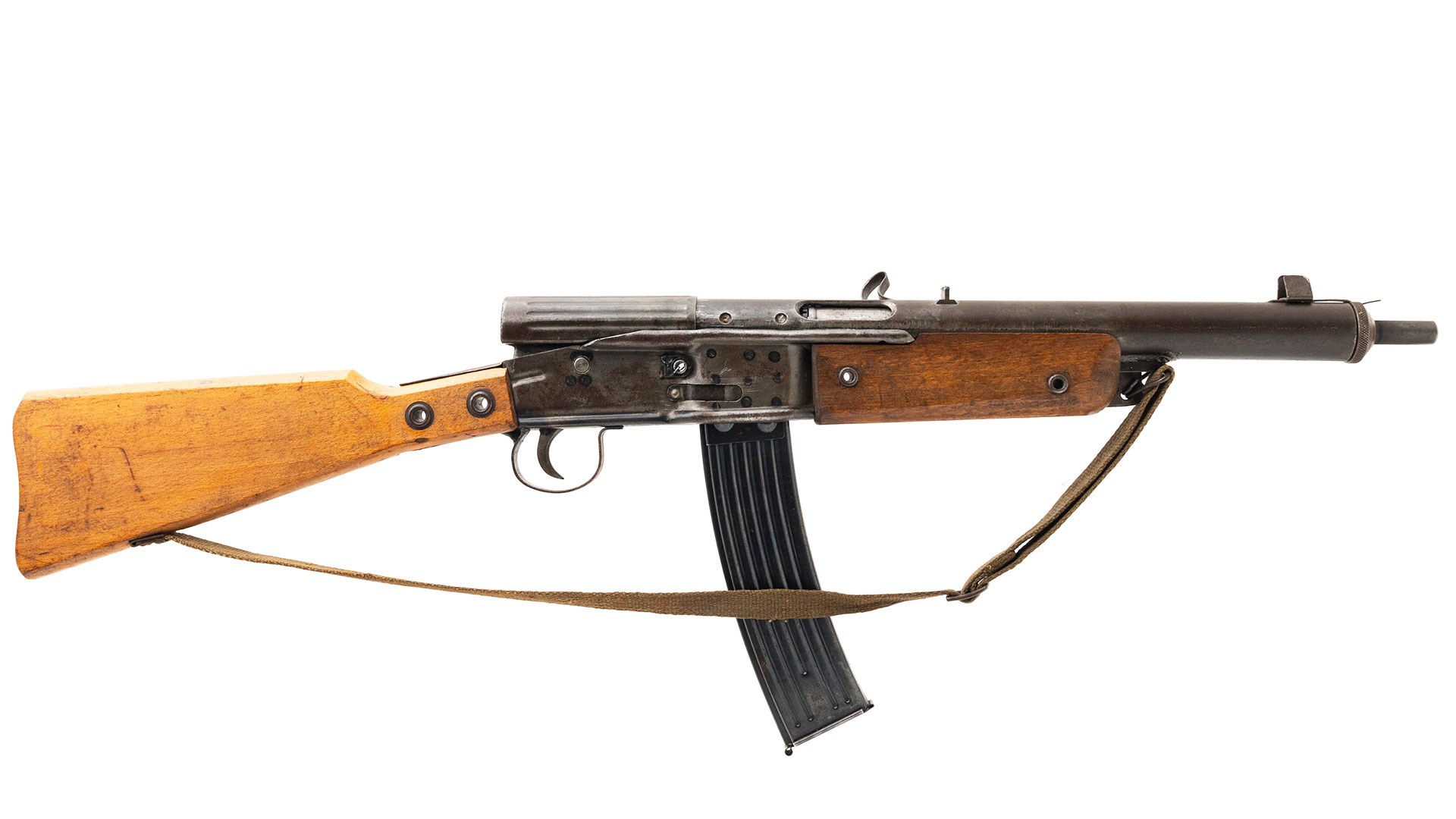 Designed by Karl Barnitzke of Gustloff-Werke in Suhl, Thuringia, the Volkssturmgewehr 1-5 was assembled using just 39 metal parts, only 12 of which required milling. Aside from a few rivets and screws, everything else on the gun was either sheet metal or springs, and that made it comparatively inexpensive and simple for a self-loading rifle. What makes Barnitzke’s design unconventional though is the use of a delayed-blowback action, whereby gas pressure vented into the operating slide briefly delays its rearward movement just long enough for the bullet to leave the 14.9″ barrel. 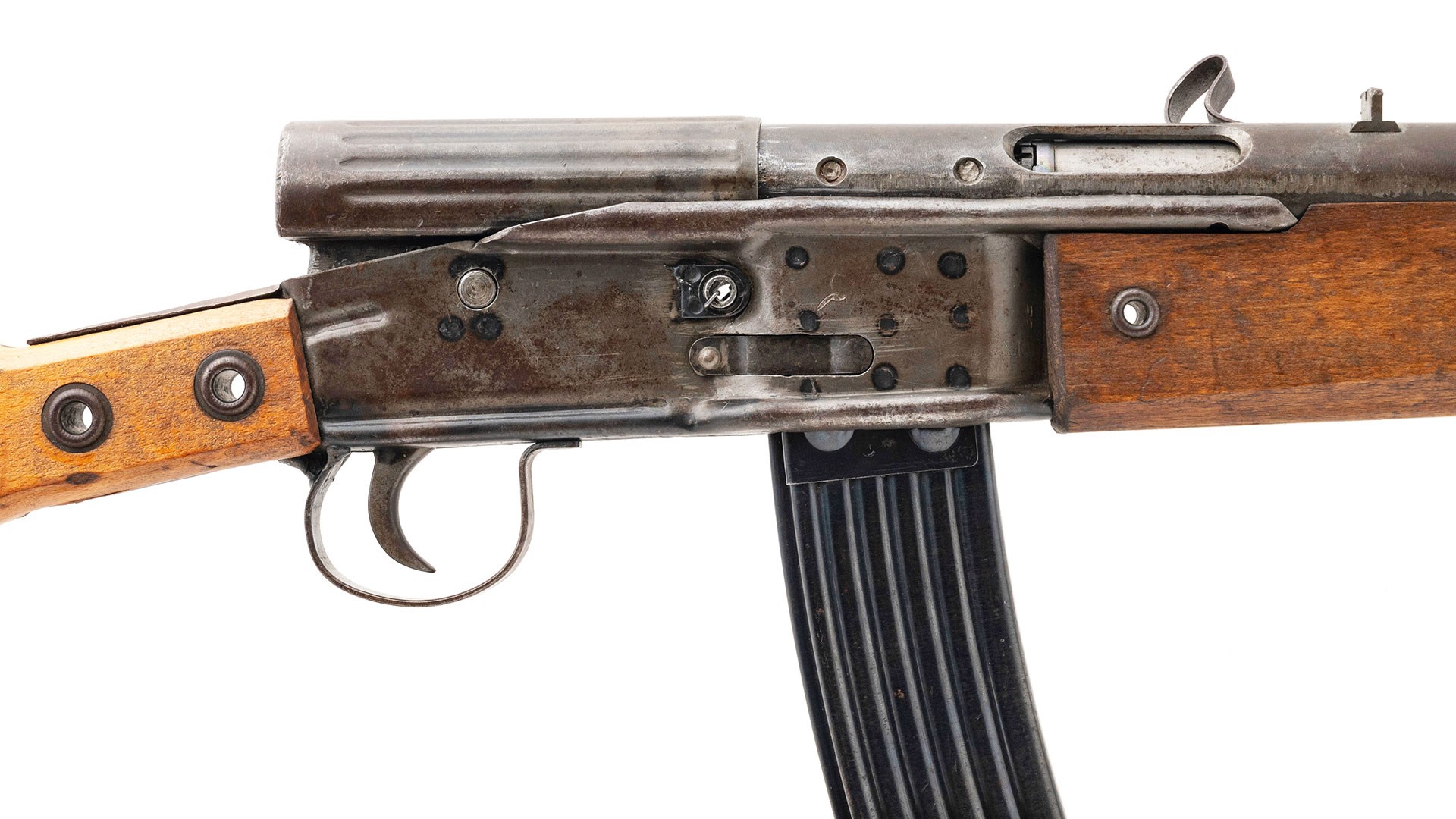 Once that has happened, residual gas pressure eventually overcomes the mass of the slide, sending it rearward into an operating cycle that extracts the spent cartridge case, ejects it and then feeds a fresh cartridge out of the magazine. The gun’s chamber is fluted to assist with extraction. This system only works in the VG1-5, because it is chambered for the intermediate 7.92×33 mm Kurz cartridge – the same cartridge used in the MP44 Sturmgewehr. Such an operating system would never work with the 7.92×57 mm Mauser cartridge, but with the less powerful 7.92 mm Kurz, everything is in balance. 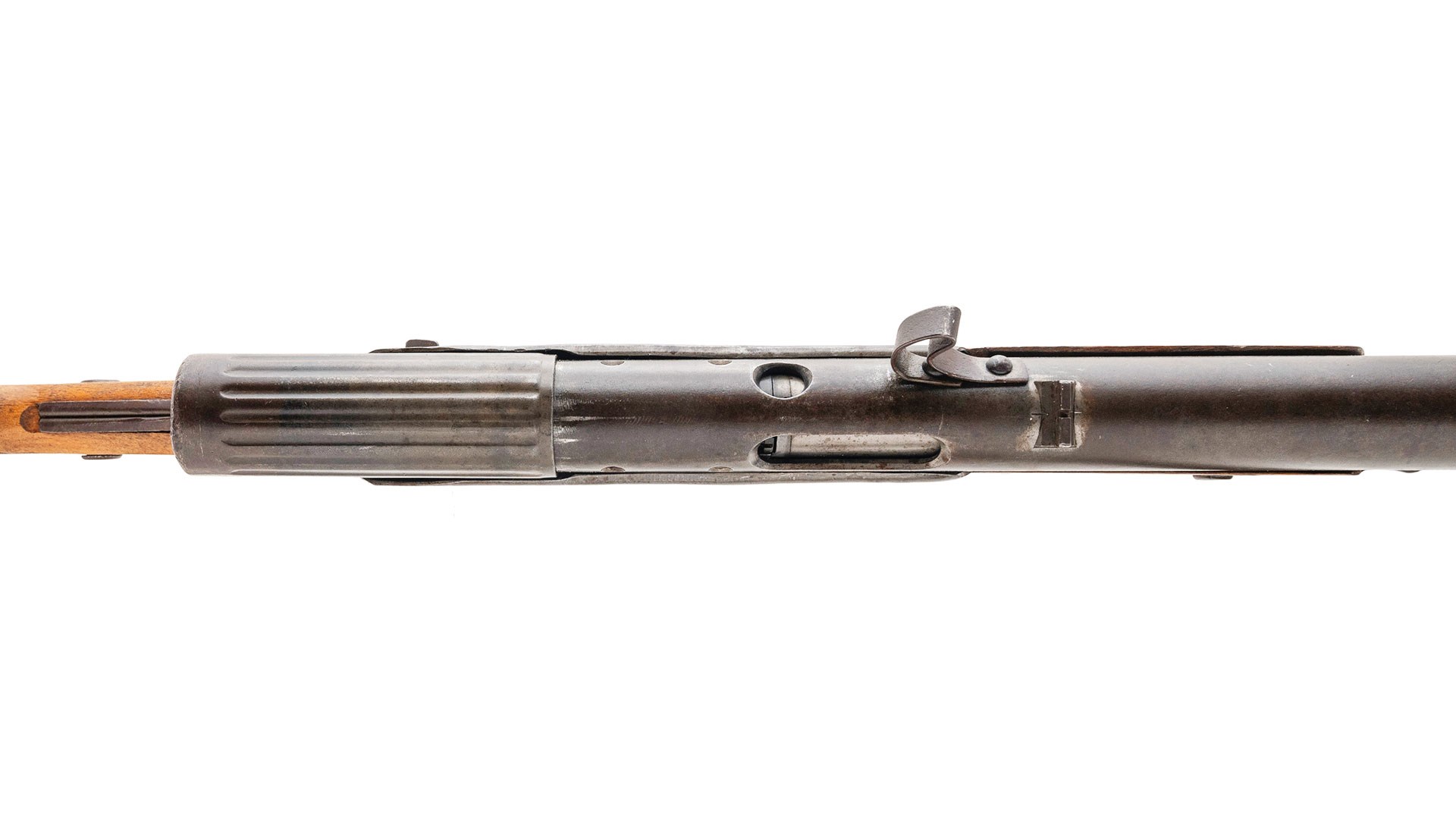 A further economizing practicality of the Volkssturmgewehr design is that it uses the same detachable box magazine as the MKb42, MP43 and MP44 – an important part of the weapon system already in operational use when VG1-5 production began in late 1944. With a mass of just over 10 lbs., its weight is about the same as the Sturmgewehr, but the similarities end there. The two guns produce totally different recoil impulses because of their different operating systems, and they feature very different sighting systems. 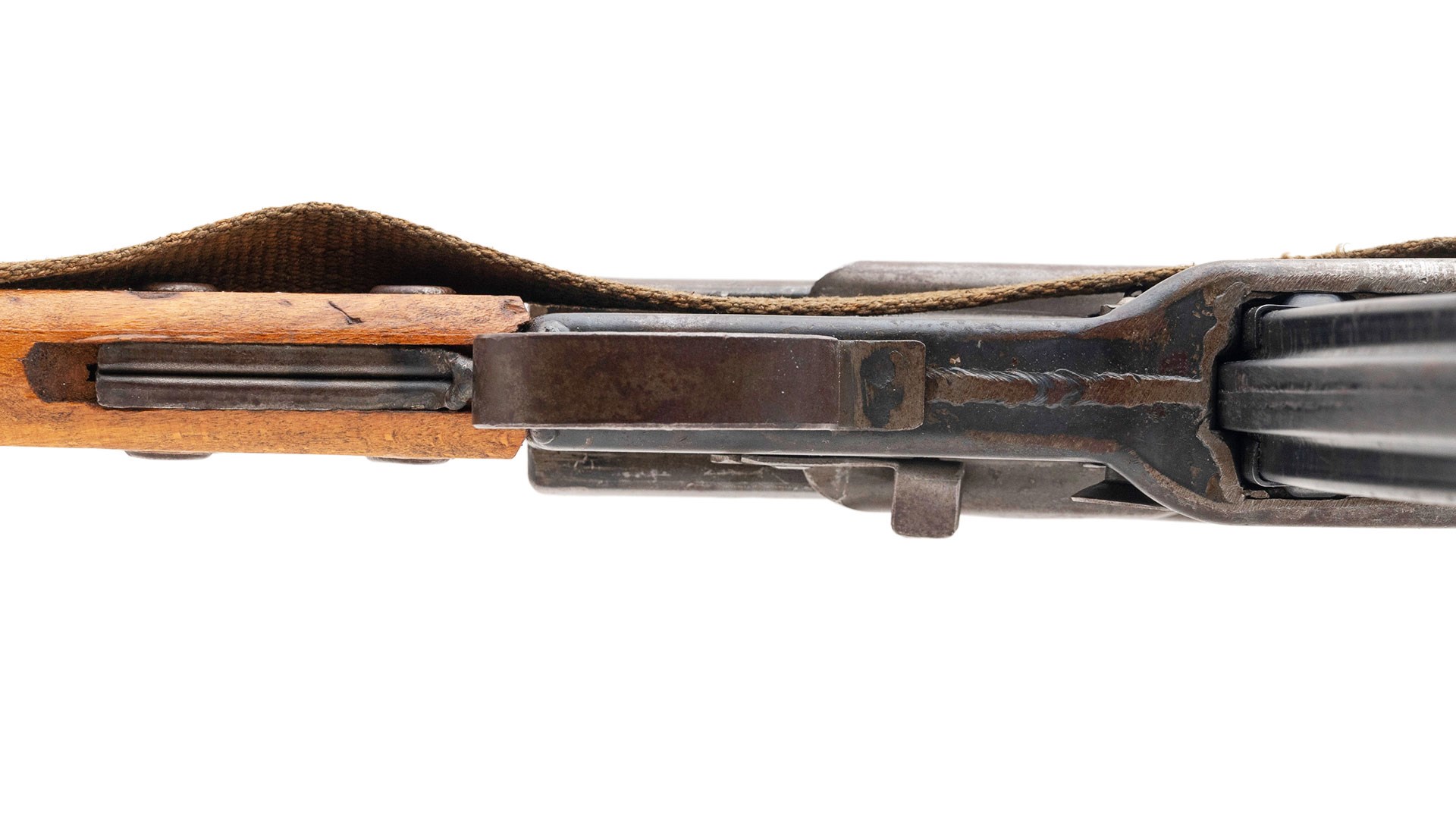 While the MP44 is equipped with a rear sight assembly adjustable out to 800 meters and a drift-adjustable front sight, the VG1-5 is equipped with a fixed U-notch rear sight set for 100 meters and a simple post front sight. Another big difference is that the Sturmgewehr is select-fire, while the Volkssturmgewehr is capable of semi-automatic fire only. Anyone with an interest in German small arms from World War II will stop and take notice if they ever encounter a VG1-5, but they will also quickly observe that something is conspicuously missing. 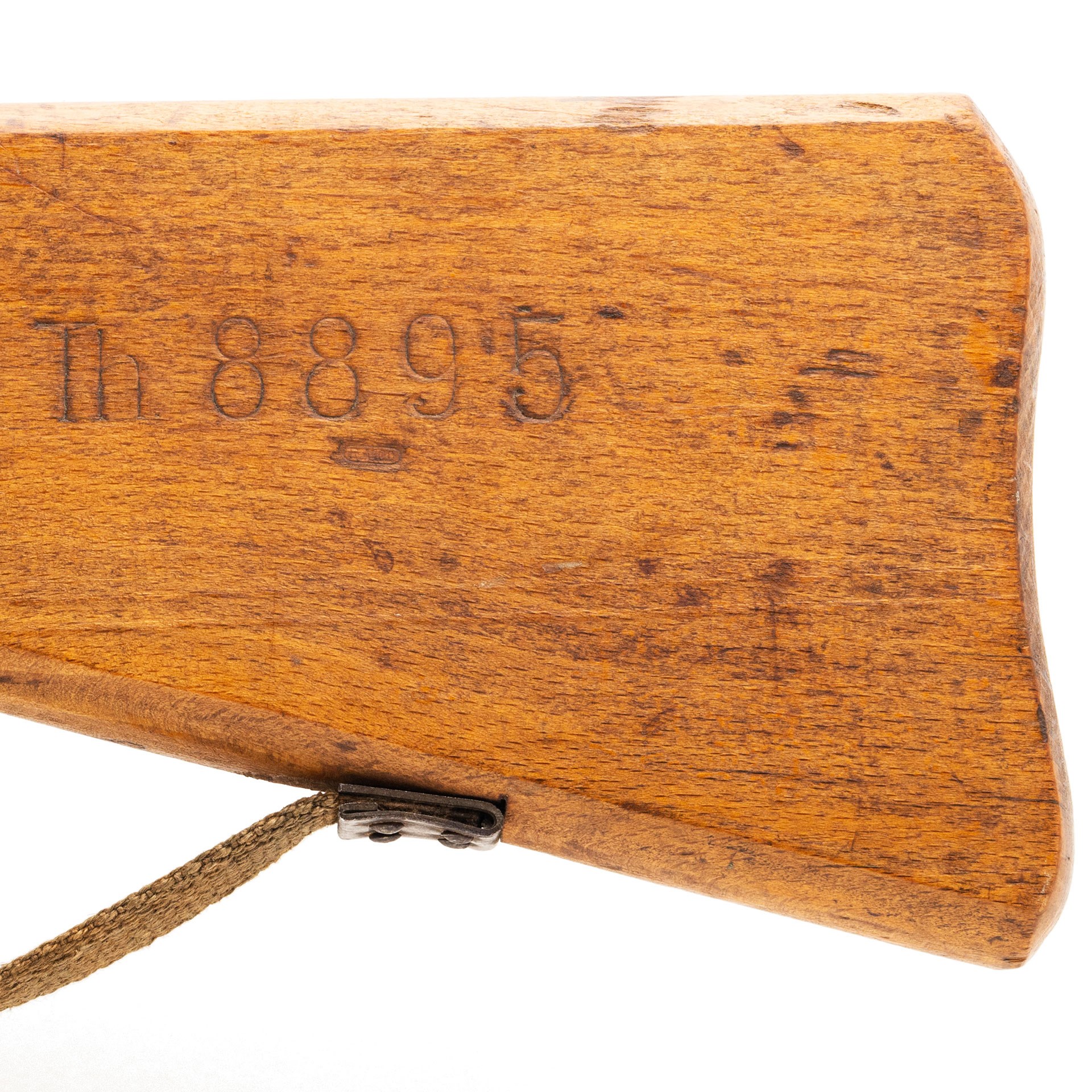 View of the serial number markings of Gustloff-Werke VG1-5 Th 8895. Photograph by Jeff Hallinan of Collectors Firearms in Houston, Tex.

Since the German military did not adopt the Volkssturmgewehr, there are no Waffenamt acceptance marks on it. For that matter, there is not even a model designation roll stamped on the receiver. In fact, the only markings to be seen on the gun will be a serial number on the left side of the beechwood buttstock with the letters “Th” as a prefix. Since the Gauleiter of the state of Thüringia ordered the guns, not the Wehrmacht, the “Th” constitutes the only indication that the government of the Third Reich had anything to do with them. 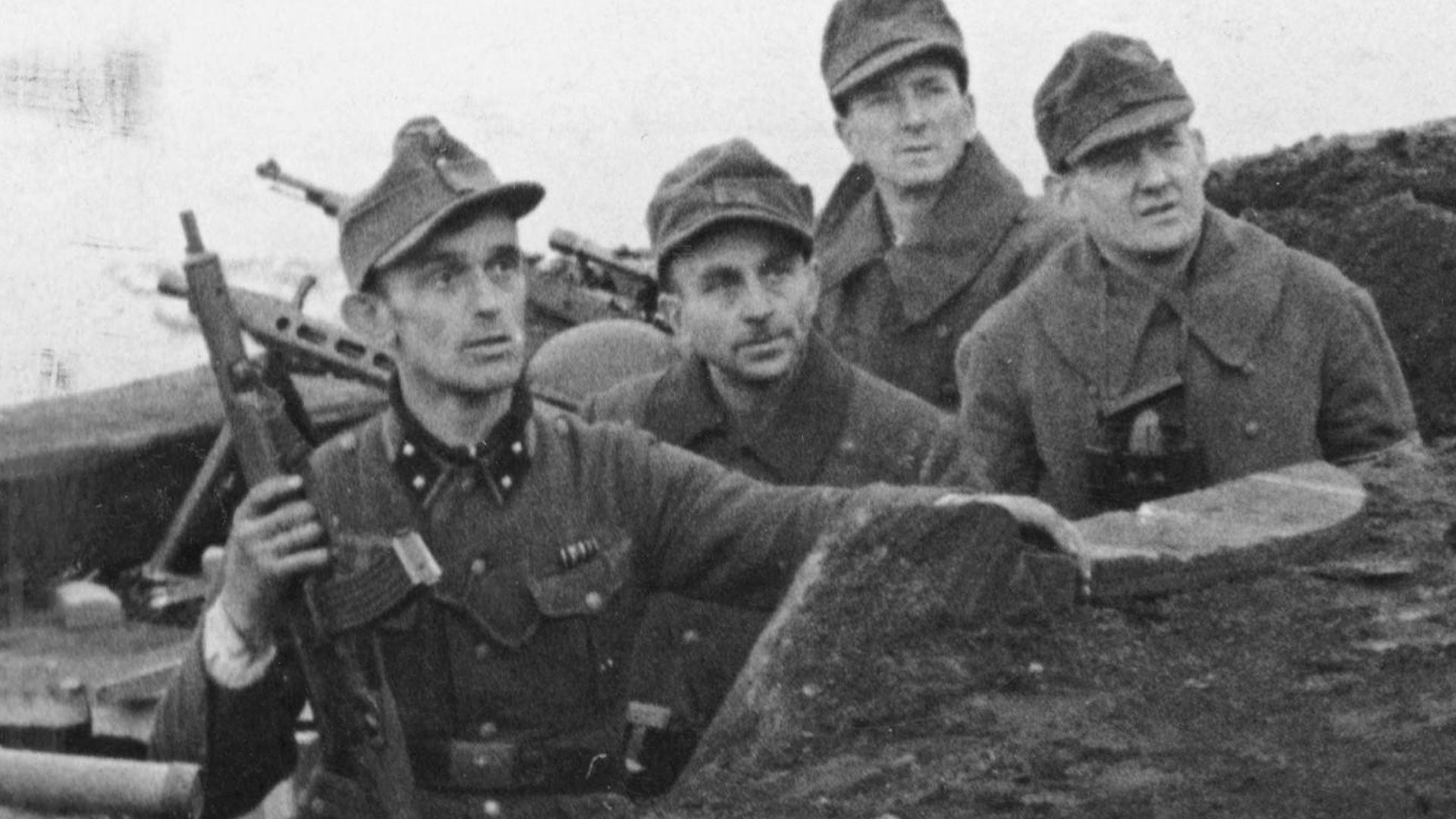 Volkssturm soldiers in an emplacement along the Oder River on Feb. 12, 1945. The man on the left is armed with a Gustloff Volkssturmgewehr. Bundesarchiv, Bild 183-J28787 / CC-BY-SA.

With a dull phosphate finish on its metallic parts and an overall crude appearance, the VG1-5 is not an elegant-looking firearm, but it was never intended to be that. It was intended to be functional, and that is well-illustrated by several of its design features: the forward handguard and buttstock are permanently riveted to the receiver, a webbed gas-mask canister strap attached to them functions as a sling, the gun’s safety selector also serves as one of its two disassembly pins, the cocking handle is a strip of sheet metal bent into the shape of a hook, and the trigger group’s stamped dust cover also secures the rear end of the operating slide to the receiver.

It is utilitarianism in its purest form, and it is the culmination of the same industrial design considerations that also produced the U.S. M3 “Grease Gun.” In the end, Gustloff-Werke produced only 10,000 examples of the Volkssturmgewehr and, although it was a clever design for its time, it did not meaningfully influence the outcome of the war. Neither did the battalions of Volkssturm militiamen who carried it in combat during the closing months of the “thousand-year Reich.”

Militia 2.0: Re-establishing The Constitutional Law Enforcers In The US