August 15, 2022 Guns In The News
Home»Commentary»Who is to Blame?
Commentary

On May 25, Texas gubernatorial candidate Beto O’Rourke (D) interrupted Texas Gov. Greg Abbott (R) during a press conference in Uvalde, Texas, and blamed the governor’s policies for the actions of a murderer. At roughly the same moment, O’Rourke’s campaign sent out an email to supporters on the stunt.

As Canada’s Prime Minister Justin Trudeau moves to ban all handgun transfers in our “quiet neighbor to the north,” President Joe Biden (D) appears to be wishing out loud that the U.S. Bill of Rights didn’t so clearly state that “the right of the people to keep and bear Arms, shall not be infringed.”

“I can’t dictate this stuff,” said President Biden with disappointment seeming to drip from his voice after he was asked about executive orders and guns.

If politics is timing and opportunity, then the horrific actions of a murderer in Uvalde, Texas, seemed to offer a window in time that President Biden, now-candidate for Texas governor, Beto O’Rourke, and others hoped to quickly crawl through with gun bans in hand.

But, as the facts came out, it quickly became clear the policies they’re pitching aren’t designed to confront the evil actions of this or other sociopaths; their policies are instead aimed directly at normal Americans who, according to the most-recent data (the 2021 National Firearms Survey), use their guns to defend themselves 1.67 million times every year—in most cases without firing a shot.

For this and many other reasons, a majority of Americans know the blame should be on any monster who commits a violent crime, not on law-abiding gun owners or a constitutionally protected freedom.

NRA Executive Vice President Wayne LaPierre addressed this in a speech at the 2022 NRA Annual Meetings when he said, “To quote the late President Ronald Reagan, we must reject the idea that every time a law is broken, society is guilty rather than the law-breaker.”

The polls show most Americans know this. As this was going to print, the latest Rasmussen reports found that “40% of likely U.S. voters believe mental health is more to blame for mass shootings by young men in America, while 30% blame access to firearms.” Also, “10% think family problems are more to blame for mass shootings, while another 10% blame social media. Only 4% think school problems are more to blame,” reported Rasmussen on May 31. So, 60% of “likely voters” do not blame guns for the actions of criminals despite what President Biden and his cheering squad in the mainstream media claim.

A majority of Americans know the blame should be on any monster who commits a violent crime, not on law-abiding gun owners.

In Uvalde, there are, and should be, questions regarding the government’s response and preparation for the attack, as well as for those who missed the warning signs from this monster. A lack of gun-control laws, however, is not to blame.

This particular murderer passed a background check because he, like so many of these mentally ill murderers, hadn’t yet been convicted of a disqualifying crime, hadn’t been involuntarily committed and had nothing else on his record that would prohibit him from purchasing a firearm; however, instead of rethinking their positions to find better solutions based on the facts, President Biden made these irrelevant, inaccurate and emotionally charged comments outside the White House: “They said a .22-caliber bullet will lodge in the lung, and we can probably get it out—may be able to get it and save the life. A 9 mm bullet blows the lung out of the body. So, the idea of these high-caliber weapons is, uh, there’s simply no rational basis for it in terms of self-protection, hunting. Remember, the Constitution was never absolute. You couldn’t buy a cannon when the Second Amendment was passed. You couldn’t go out and purchase a lot of weaponry.”

Actually, you could buy a cannon in 18th-century America. There were ads for them in various publications at the time. Also, Biden’s rambling statement about the 9 mm is not even remotely grounded in reason, making it difficult to even make sense of.

It should be noted, though, that the 9 mm is easily the most-popular handgun caliber in the United States. It is used by millions of citizens and by most police departments. According to the Bureau of Alcohol, Tobacco, Firearms and Explosives’ (ATF) Annual Firearms Manufacturing & Export Report, pistols produced in 9 mm comprised approximately 56.8% of new pistols produced in 2019, and made up about 42% of pistols produced between 2010 and 2020.

For this and other reasons, Biden’s desire to ban the 9 mm was actually a big tell indicating he’d like to ban handguns. Perhaps for this reason, White House Press Secretary Karine Jean-Pierre had to walk back Biden’s comments. In response to a question from Fox News’ Peter Doocy about whether Biden would support legislation similar to what Canada’s prime minister said would create a “national freeze on handgun ownership,” she said Biden “supports a ban on sales of assault weapons and high-capacity magazines and expanded background checks to keep guns out of dangerous hands. He does not support a ban on the sale of all handguns.” 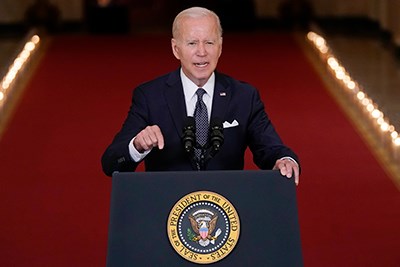 What Biden clearly does (without a correction) support is tightening the screws on the law-abiding, while giving law-breakers a pass in our national gun-control debate. Biden’s desired gun bans, so-called “universal” background-check idea (in quotes because it wouldn’t be universal, as criminals simply wouldn’t comply) and other restrictions are focused solely on the law-abiding. To put an exclamation mark on this, realize that 2019 statistics from the U.S. Department of Justice determined that less than “1 in 50 (less than 2%) of all prisoners had obtained a firearm from a retail source and possessed, carried, or used it during the offense for which they were imprisoned.” Criminals almost always obtain their firearms via illegal means.

Instead of seeing an opportunity to blame law-abiding gun owners, and thereby push gun control, this should be a wake-up call that we need to harden our schools and to implement better mental-health strategies to find, stop and treat potential murderers or those who are considering harming themselves. Other approaches to better protecting our law-abiding citizens should be considered before ever considering restrictions on the rights of those same law-abiding citizens.

In June, the NRA noted this in a rebuttal to a televised gun-control speech from President Biden:

America does have a critical mental-health crisis. Many are sick, too few people are able to recognize their illness, and even less get help. The sad reality is there are too few resources for those who need it. Over the last 60 years, the number of beds available at psychiatric hospitals in America has dropped by 96%. In 1955, there were an estimated 340 beds per 100,000 people with mental-health illnesses. In 2016, that number fell to 11.7 beds per 100,000 people. We must find a way to reach these people before they hurt themselves or others. And, we must fund places for these people to find refuge and treatment.

The NRA’s response also said, “The NRA has long supported securing our schools so that our teachers and children will be safe. We support strict enforcement of all our nation’s laws that target violent criminals. We support prosecution and punishment of criminals who break these laws. Indeed, the NRA supports the arrest, prosecution and punishment of any violent criminal or other dangerous prohibited person who tries to purchase or possess a firearm.”

Targeting the problem (the criminal element in our society), however, is not what President Biden wants, as this honest approach doesn’t institute his policy goal of banning guns and further restricting Second Amendment rights. This, as the NRA said at the end of its statement, is a “shame.”

Arkansas: Stand Your Ground Legislation Sent to the Governor’s Desk for Signature