May 14, 2022 Guns In The News
Home»Commentary»Zastava ZPAP M70: An Authentic AK for the U.S. Market
Commentary

The Yugoslav Republic carved out a unique niche in Eastern Europe from its formation following World War I until its demise at the conclusion of the Cold War. The country’s independence streak extended to their arms industry. They proved themselves willing to take the best foreign designs, from the FN Model 24 Mauser to the German MG42 machine gun to the Soviet SKS, and manufacture them in their own unique configuration.

The most famous, and prolific, Yugoslav firearm is their native version of the Soviet AK-47. In the late 1950s, they developed a version of the Warsaw Pact (which Yugoslavia never joined)-standard AK, with a few twists, including a mechanical bolt hold open device and a built-in grenade launching system.

In 1970, the design was updated and officially adopted by their armed services as the M70. The Yugoslavs would eventually settle on using a receiver in the style of the RPK light machine gun version of the AK-47 that uses thicker 1.5 mm stamped metal and a heavy-duty “bulged” front trunnion.

The mechanical bolt hold open device was replaced by a magazine follower that locked the bolt back when empty. Versions of the rifle were also made in the Western calibers of 5.56 mm and 7.62 mm NATO for export. To date, over four million Yugoslav AK-type firearms have been produced. 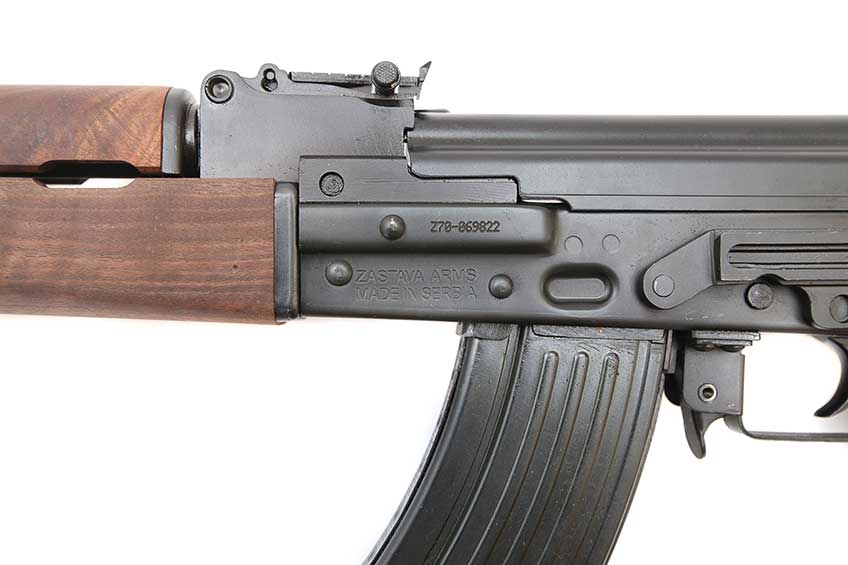 The major components of the Zastava ZPAP M70, including the barrel and receiver, are made in Serbia. The rifles are imported into the U.S. by Zastava USA, who adds the appropriate number of America-made parts for 922(r) compliance.

The manufacturer of the M70, Zastava Arms, opened its doors in 1853 as the state armaments factory for the newly independent Kingdom of Serbia. It served through the Yugoslav Republic and into the current nation of Serbia. New commercial Zastava products, from semi-automatic handguns to bolt action rifles, have been imported into the U.S. since the 1980s. In 2019, the company opened its U.S. subsidiary as Zastava Arms USA. 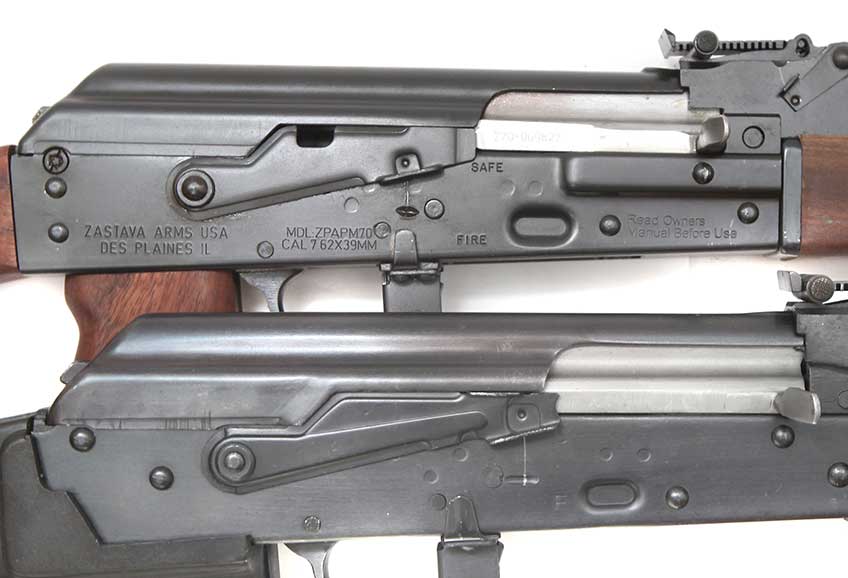 The Zastava ZPAP M70 use a safety lever/dust cover with a notch in it to lock the bolt to the rear.

Among Zastava USA’s products are AK-type rifles and handguns in the semi-automatic only “PAP” series. The original version of the ZPAP rifle they offered used a 1 mm thick, stamped receiver with a standard front trunnion. 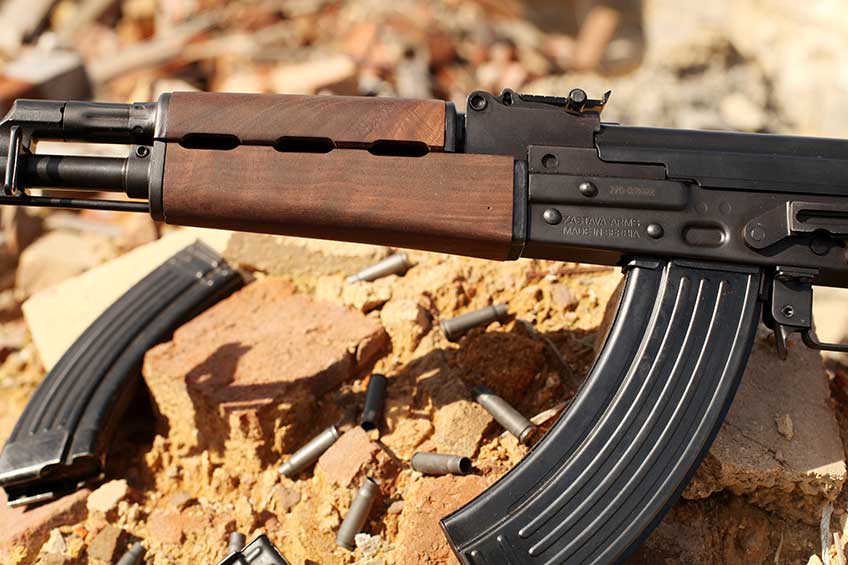 The Zastava ZPAP M70 uses a heavier, “bulged” front trunnion taken from the RPK light machinegun version of the AK.

This year, they updated the rifle with a 1.5 mm thick stamped receiver and a bulged trunnion, along with a chrome-lined barrel (a feature not found on the military version of the M70). AK purists will notice a few differences between the ZPAP and its military counterpart.

The civilian version of the M70 deletes the grenade-launching system and adds a “Yugo-pattern” receiver side mount base for optics (a feature of Serbia’s current service rifle, the M21A). While different than the Russian-type AK side scope mount base, there are plenty of mounting systems available (to those new to the AK world, the buttstock and handguards on Yugo-pattern AKs are also not compatible with standard AK parts, but aftermarket fills the gap). 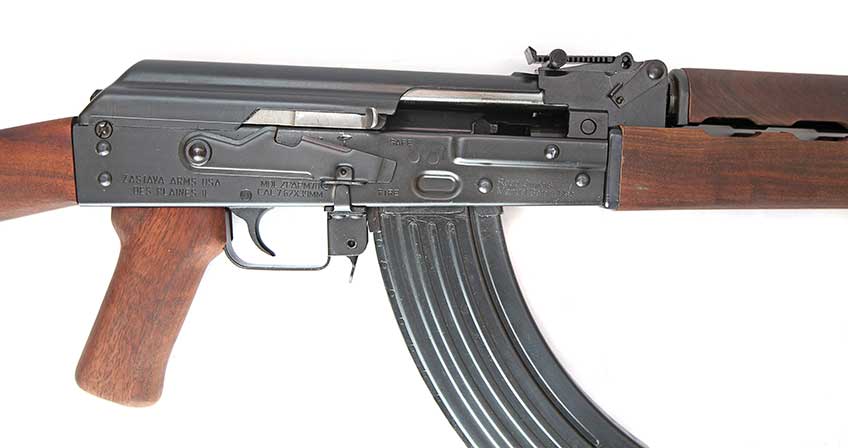 The ZPAP uses standard, double-stack 7.62X39 mm AK-type magazines of any capacity (the bolt is also of the correct double-stack form). The supplied magazine features a bolt hold open follower. In our testing the magazine reliably held the bolt open after the last round was fired. Of course, removing the magazine allows the bolt to close. 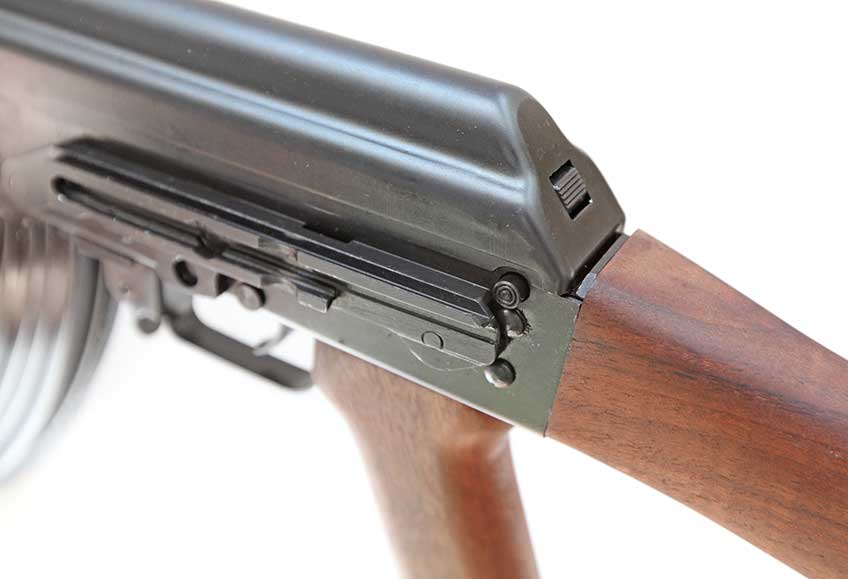 When the magazine runs empty, the shooter has the option to manually lock the bolt open using a notch in the safety lever/dust cover. The supplied magazine fit securely with no perceivable “wobble,” and the rifle functioned reliably with a wide variety of commercial and surplus AK magazines of various capacities. 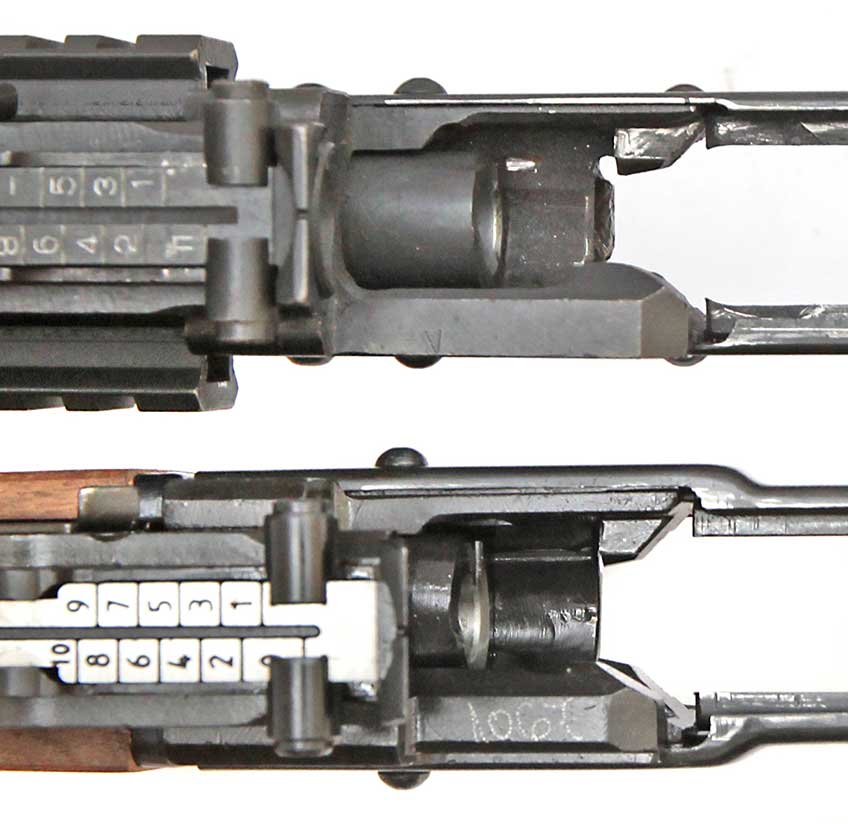 The Zastava ZPAP M70 uses a thicker-than-standard 1.5 mm stamped receiver that uses a heavy-duty “bulged” front trunnion, a set-up taken from the RPK light machinegun version of the AK.

The major components of the rifle, including the barrel and receiver, are manufactured in Serbia and imported into the U.S., where the appropriate number of American-made parts are added for 922(r) compliance. Among the additions are an American walnut stock, which uses more of a traditional Soviet AK profile than the distinctive Yugo AK stock profile. The rifle is also available with a telescoping M4-type stock and synthetic handguard. 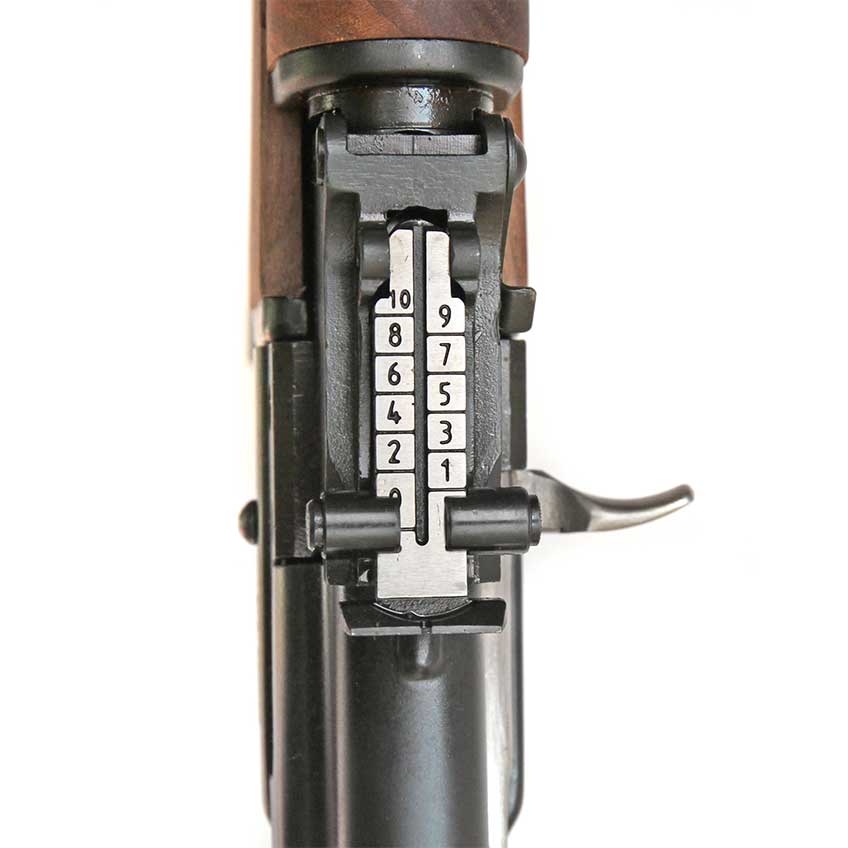 Wood and metal finish on the ZPAP M70, including the rivet job on the stamped receiver, are excellent throughout. Two minor critiques. The first is the wood-to-metal fit. It’s great by AK standards, but the quality of the wood that the ZPAP is wearing seems like it would have warranted a more careful fitting. Second, the pistol grip lacks the checkering or texturing necessary to get a positive grip under less-than-ideal conditions. 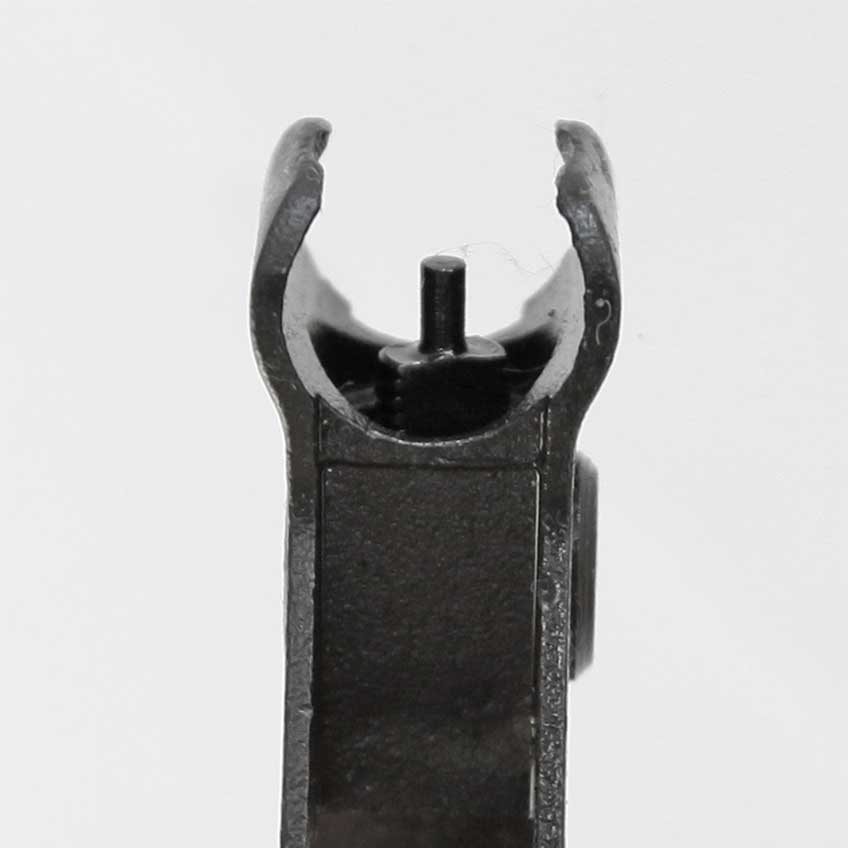 On the range, the ZPAP’s reliability was, well, pure Kalashnikov. From the most budget imported steel-cased ammunition to high-end American-made brass-cased fodder, from round one, the ZPAP functioned without a hitch. We ignored the scope mount and did our accuracy testing with the ZPAP’s standard AK-type open sights. It fit with the rifle’s classic look, and that’s how Mikhail intended it anyway.

The better-than-typical trigger breaks at just over four lbs. after about 3/8″ of take-up and reset positively. Accuracy averaged five-shot groups at just over three inches, with Hornady’s American Gunner load with its HP Match bullet turned in groupings of just over two inches, a great showing, given the AK platform’s short sight radius and less-than-stellar reputation for accuracy. 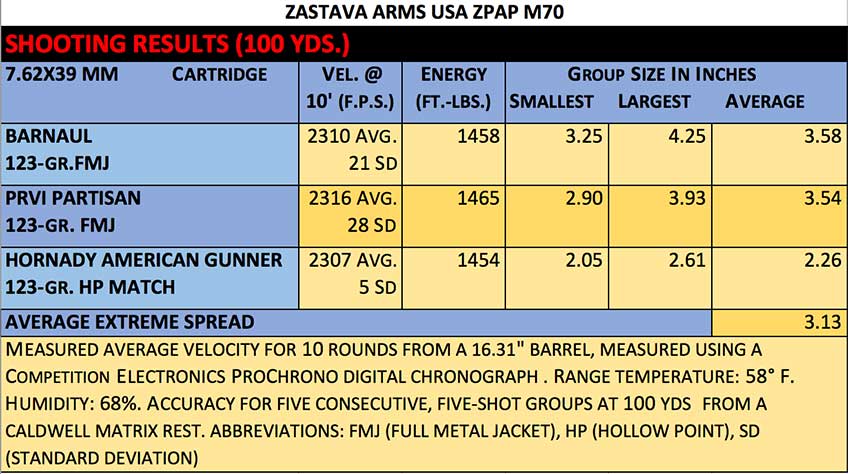 With the ZPAP M70, Zastava Arms USA has brought one of the most prolific and iconic of the Kalashnikov variants to the U.S. market. The result checks all of the boxes for the AK aficionado, with a well-made and authentic rifle that comes in well under a thousand dollars.