An old adage in the collecting field is “buy the gun, not the story.” Sometimes, though, guns can tell a story all their own. Some are supported by documentation accompanying the rifle, and in other cases, the changes, updates, stamps and marks on a gun can share details of a larger saga. One such gun is the Vetterli-Vitali, an Italian design that’s not particularly expensive or sought-after, but these military rifles played a role in a number of seminal world events, and that makes them unique witnesses to history that we can still appreciate today.

This example of a Model 1871 Vetterli was a military arm produced by the Societe Industrial Suisse and later sold commercially. Note that there’s no provision for a magazine on the underside of the stock as it was designed as a single-shot arm.

The model designation for this particular martial arm is a bit of a mouthful. It’s the M1870/87/15 Vetterli-Vitali-Carcano, and already in its name, it’s evident that it has quite a service history. The design itself emerged in Switzerland with the Modell 1869 Repetiergewehr Vetterli, which was built with a 12-round tubular magazine under the barrel. A year later, the Italian Army adopted a single-shot variant of the design as the Fucile di Fanteria, Modello 1870 Vetterli. As the Kingdom of Italy consolidated its position following multiple wars of independence and foreign occupation, the M1870 Vetterli gave the Italian military a fairly modern arm for the period. Although a single-shot, it fired a 10.35×47 mm centerfire cartridge, making it the first centerfire bolt-action rifle adopted by a major military power.

Like the Swiss model, the initial Italian Model 1870 Vetterli was also a single-shot design, so there was no magazine protruding from the bottom of the action.

Despite its adoption in 1870, the single-shot Vitali was produced for nearly 15 years. By the mid-1880s, though, bolt-action magazine rifles were becoming the norm. By 1884, Germany had converted its M1871 Mauser to feed from a tubular magazine, and the French M1886 Lebel not only had a tube magazine, it also fired a modern smokeless-powder cartridge that would revolutionize firearm technology. The Italians weren’t that forward thinking, but a change was needed. In 1887, the military developed a magazine conversion that could be applied retroactively on previous single-shot models and incorporated into new production.

An example of an early Italian M1870/87 Vetterli-Vitali magazine conversion. The 10.4 mm chambering of the gun was unchanged at this time, but the metal magazine with the prominent magazine well was installed in the late 1880s. Filling the magazine required the use of a wooden charger block that was withdrawn from the top of the gun after loading.

This particular rifle was built in Brescia in 1884, so while it isn’t as old as some Vetterli models, its production falls only a few years before the 1887 Vitali magazine conversion. At some point in its history, it would have been converted. Typically, the date of conversion would be marked inside a shield stamp on the right side of the stock. That identifying feature on this Vetterli-Vitali disappeared long ago, probably due to sanding during an arsenal refinish. However, the bulk of these conversions would have been done in the late 1880s and early 1890s, because by 1891, a new Italian service rifle appeared on the scene. The M91 Carcano superseded the Vetterli-Vitali in frontline service, but converted magazine rifles firing the large 11.35 mm cartridge continued to see rear-echelon service. 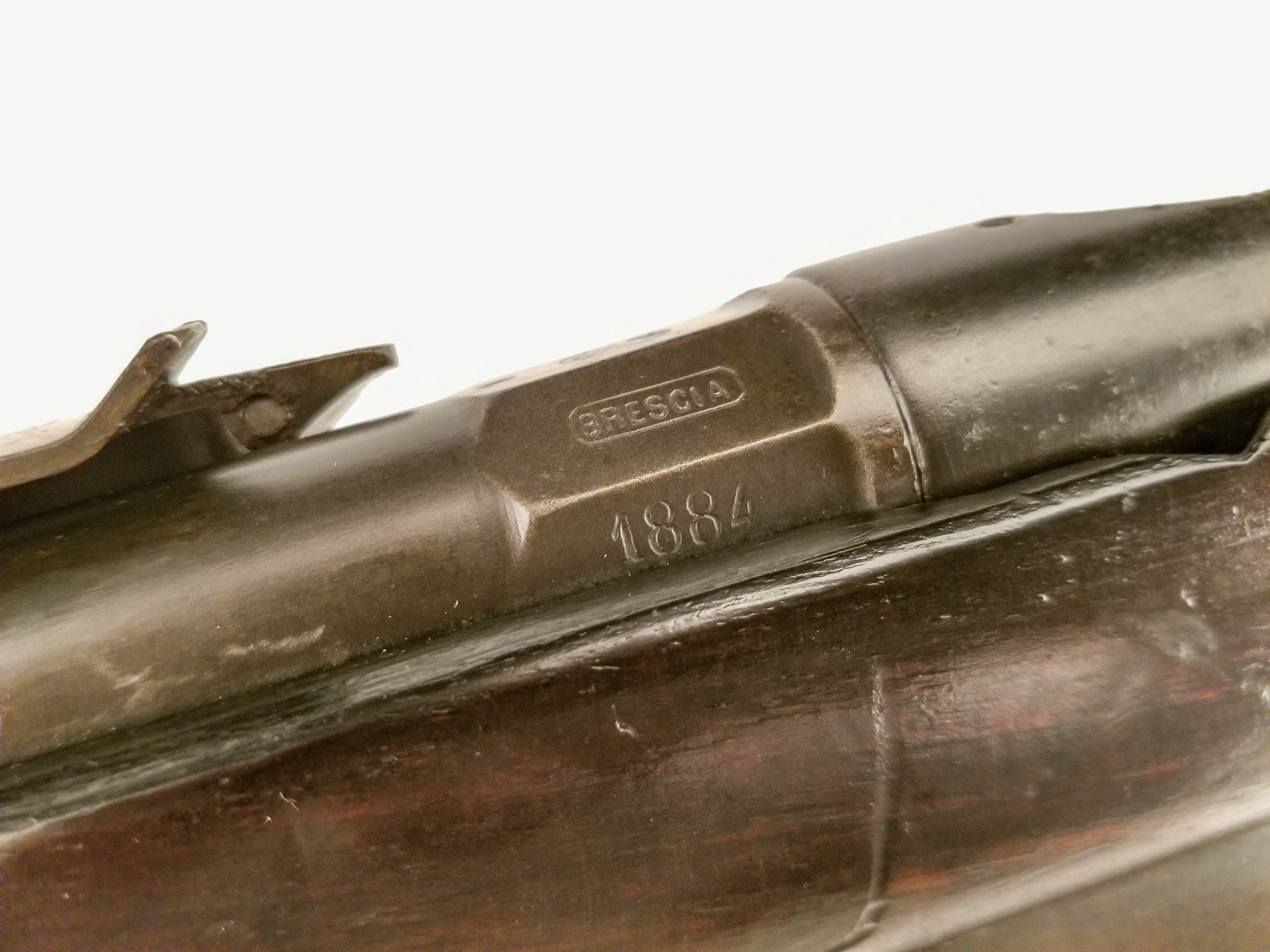 Normally, in most cases, these large-caliber black-powder single-shots and magazine conversions had fallen far out of favor by the time World War I began in 1914. Germany, at this time, was relying on its M1888 Commission Rifle for rear-line service, and that was a small-bore, smokeless-powder repeater far ahead of its M1871 design. Britain had long declared its Martini-Henry obsolete, though a scant few of them did see service in a converted form chambered for the .303 British. By 1914, the Italian military had so many Carcanos in service that its Vetterli-Vitalis were relegated to storage. Then Luigi Cadorna came onto the scene. 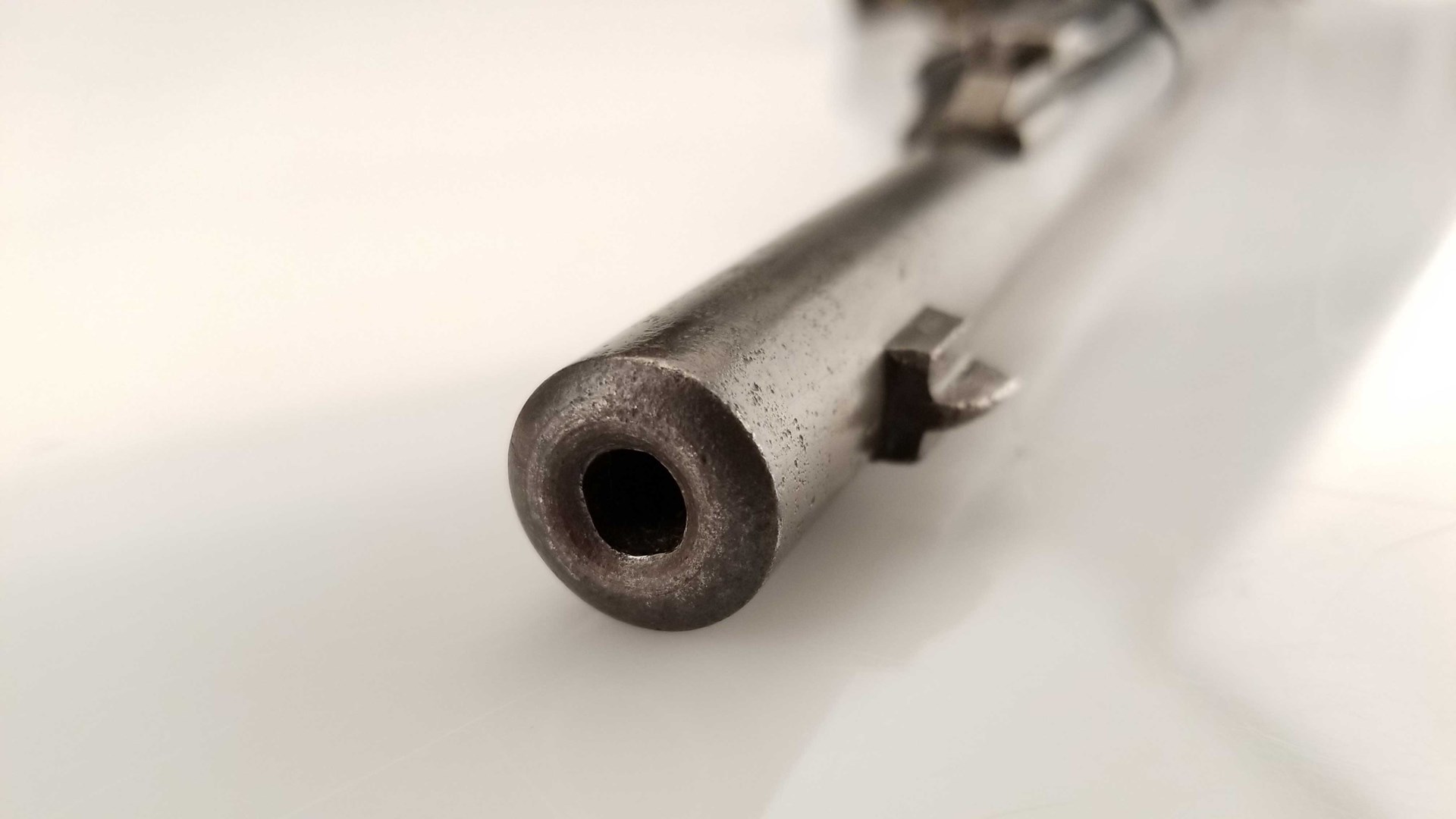 A careful examination of the muzzle on this M1870/87/15 Vetterli-Vitali will reveal the seam between the original 10.4 mm barrel and the 6.5 mm Salerno barrel sleeve.

In a conflict replete with horrible leadership, Luigi Cadorna stands out as one of the worst. It was not his idea to return the obsolescent Vetterli-Vitali back to military service, but his multiple failed offensives along the Isonzo River had lost hundreds of thousands of Italian soldiers. Gone, too, were many of the M91 Carcano rifles those soldiers carried into battle. Put simply, Cadorna was losing men so rapidly that Italian rifle factories found it impossible to keep up with combat losses. By 1915, the shortage was so severe that alternatives had to be found. A barrel-sleeving technique termed the “Salerno method” was used to convert the 11.35 mm black-powder Vetterli-Vitali to the modern 6.5 Carcano round. These converted arms were then given to rear-guard troops, thereby freeing up more modern rifles for frontline service. 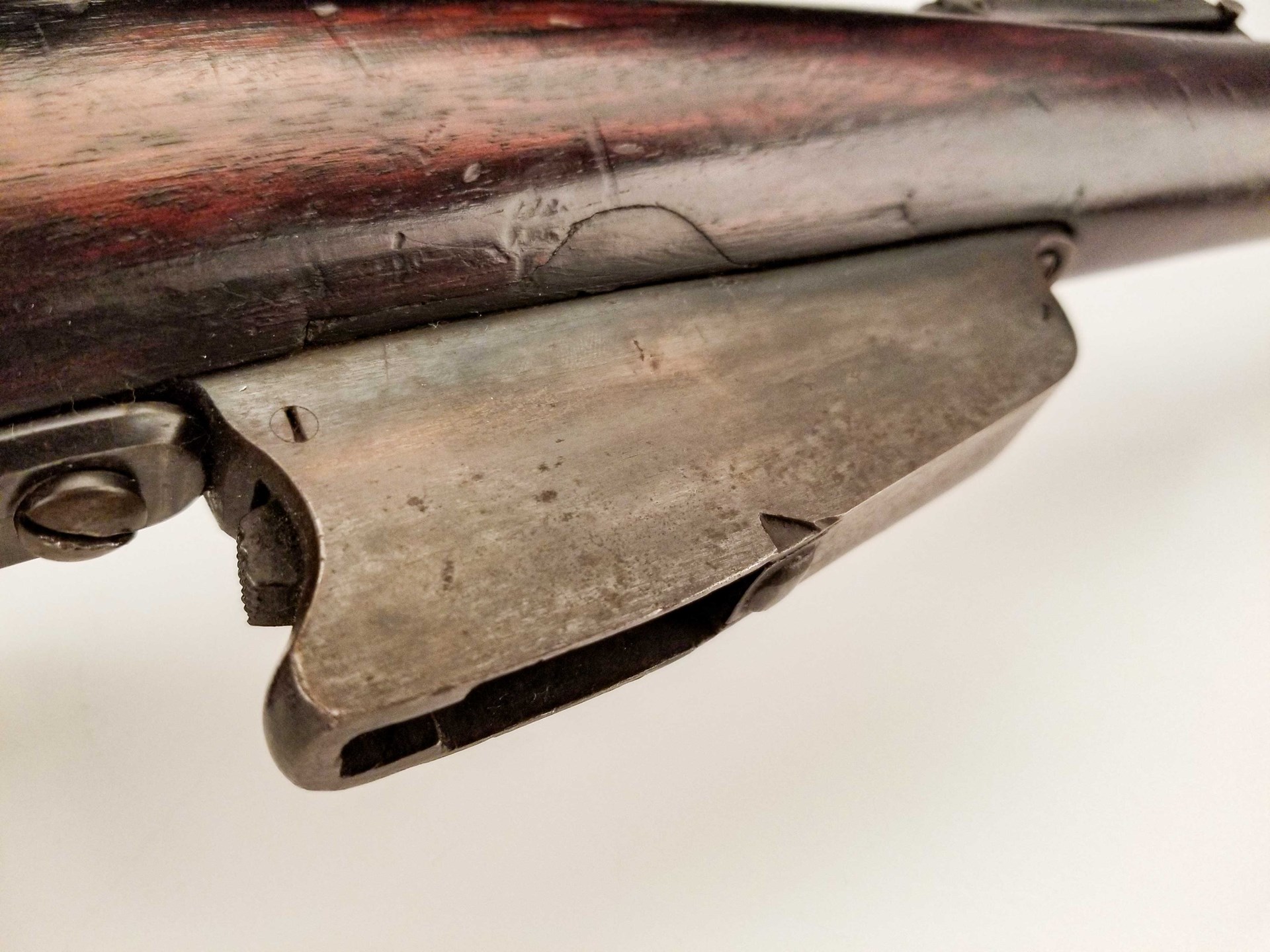 This conversion required a great deal of work on the rifle. In addition to the barrel sleeve, the bolt face was machined to fit the 6.5 Carcano case head, and the old Vitali magazine was removed and a new Carcano magazine installed that fed from contemporary en-bloc clips. That led to its final designation as the M1870/87/15 Vetterli-Vitali, and some times, collectors will tack on the “Carcano” to designate the magazine and cartridge conversion. However, this particular rifle has a few more clues that add to its history, and it also illustrates an interesting time in the run-up to World War II. This is also the point where we depart from the known and venture into the unknown, as much research still remains to be done on the following information. 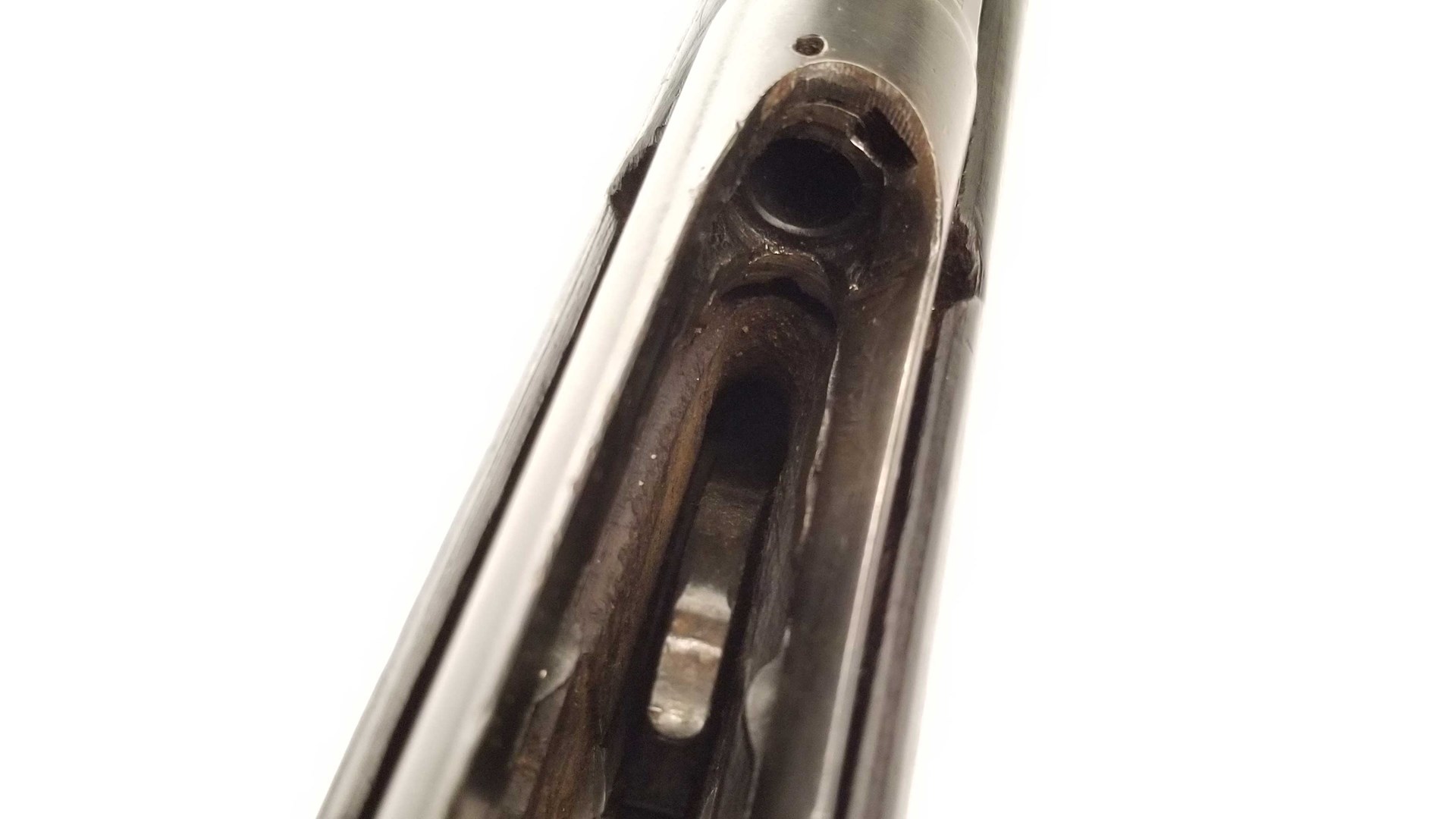 This rifle, like many others, is outfitted with the “MP8” flaming-bomb insignia stamped into the left side of the stock. This stamp is not limited to any particular make or model of gun, and there’s no clear indication of exactly when these stamps were applied. The one piece of information researchers seem agree on is that this stamp was applied to guns in Spanish military inventory following the country’s civil war from 1936-1939. It is known that Vetterli-Vitali rifles were used by both sides during the Spanish Civil War. During World War I, Russia received thousands of unconverted Vetterli-Vitali rifles for emergency use, and Stalin forwarded these 11.35 mm rifles to the Republicans during the war. Franco’s nationalists received outside help from other fascist governments at the time, notably through the German Condor Legion, and the presence of these 6.5 Carcano-converted Vetterli-Vitali rifles indicates that Mussolini cleared Italian military stores of these obsolete, emergency-use rifles and gave them to Franco’s forces as aid. In Orwell’s “Homage to Catalonia,” there’s a specific passage that references his search for arms during fighting in Barcelona. 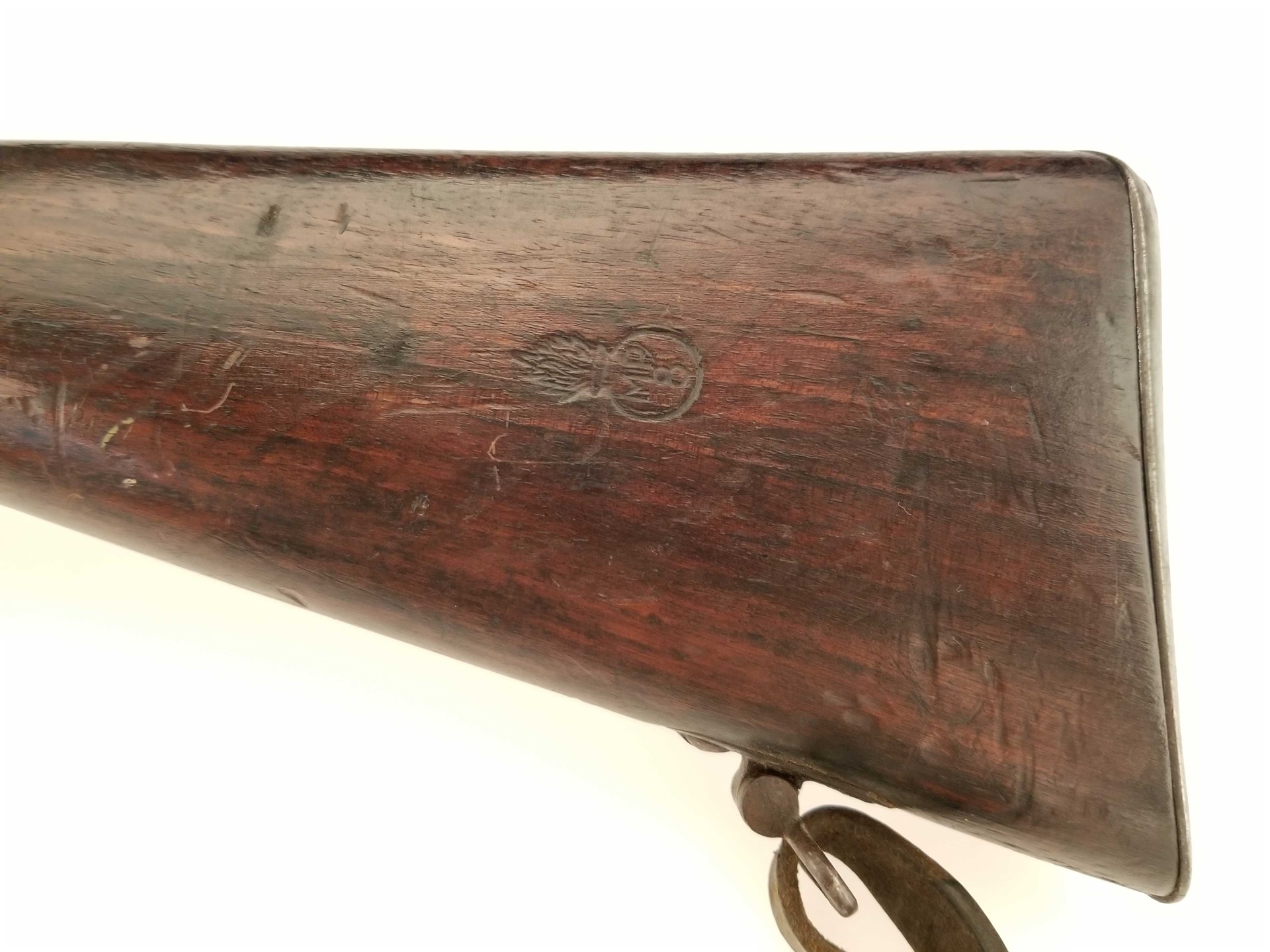 “All we found there were about two dozen small-bore rifles of an obsolete pattern and a few shot-guns, with no cartridges for any of them,” possibly a reference to the 6.5 mm Vetterli-Vitalis sent to Spain. In any case, the guns were likely refurbished after the war, and some have speculated that the “MP8” stamp is a reference to a specific reclamation depot where these rifles were refurbished, possibly during or immediately after World War II. These guns were discovered in Spain by Sam Cummings of Interarms and brought into the United States in the 1950s. 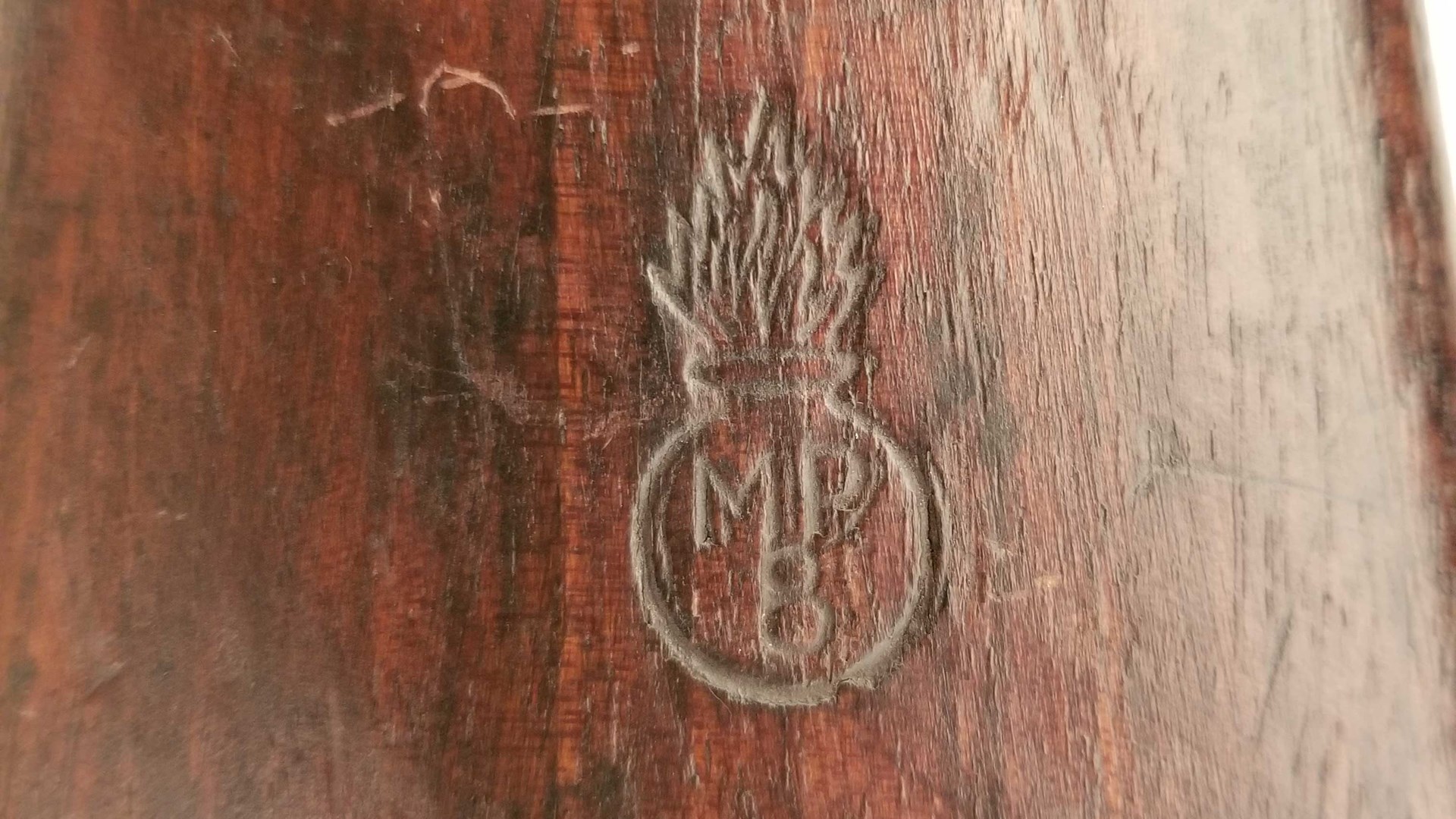 From the evidence we have at hand, this particular firearm saw service of some kind, whether frontline or rear-echelon, from the 1880s until the 1940s, and now it sits here. These converted Vetterli-Vitalis are not particular popular with today’s collectors, and because of that, they can be had cheaply. For around $250, one can have a strikingly piece of history to hang on the wall, and that’s about the safest thing to do with them. The soft-soldered Salerno sleeves are not well anchored in the bore of the old 11.35 mm barrel, and the anemic rear-locking lug on the Vetterli bolt was designed for low-pressure blackpowder rounds, not high-pressure 6.5 Carcano rounds. Though examples of these guns have been fired over the decades without issue, others have failed spectacularly. They should not be considered safe to shoot, and certainly not with full-power loads. Regardless, they are fascinating rifles to see and to research, and hopefully, more will come to appreciate their rich history in the years to come.