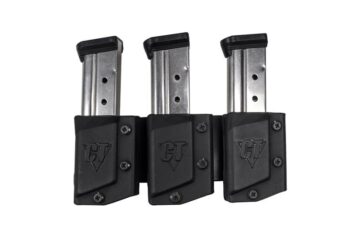 July 5, 2022 Guns In The News
Home»Commentary»Blackpowder Basics: How To Shoot An Old-School Muzzleloading Rifle
Commentary

Muzzleloaders have come a long way since their renaissance in the 1950s and ‘60s. Contemporary muzzleloaders are anything but primitive, with their high-tech materials, state-of-the-art designs and modern bullets and propellants. While modern muzzleloaders are easy to shoot, it’s hard to beat the satisfaction of loading and firing a traditional muzzleloader. Brass and blued steel. Hardwood stocks. A large cloud of pungent smoke. Nothing harkens back to the beginnings of the American experience like an old-school muzzleloader. 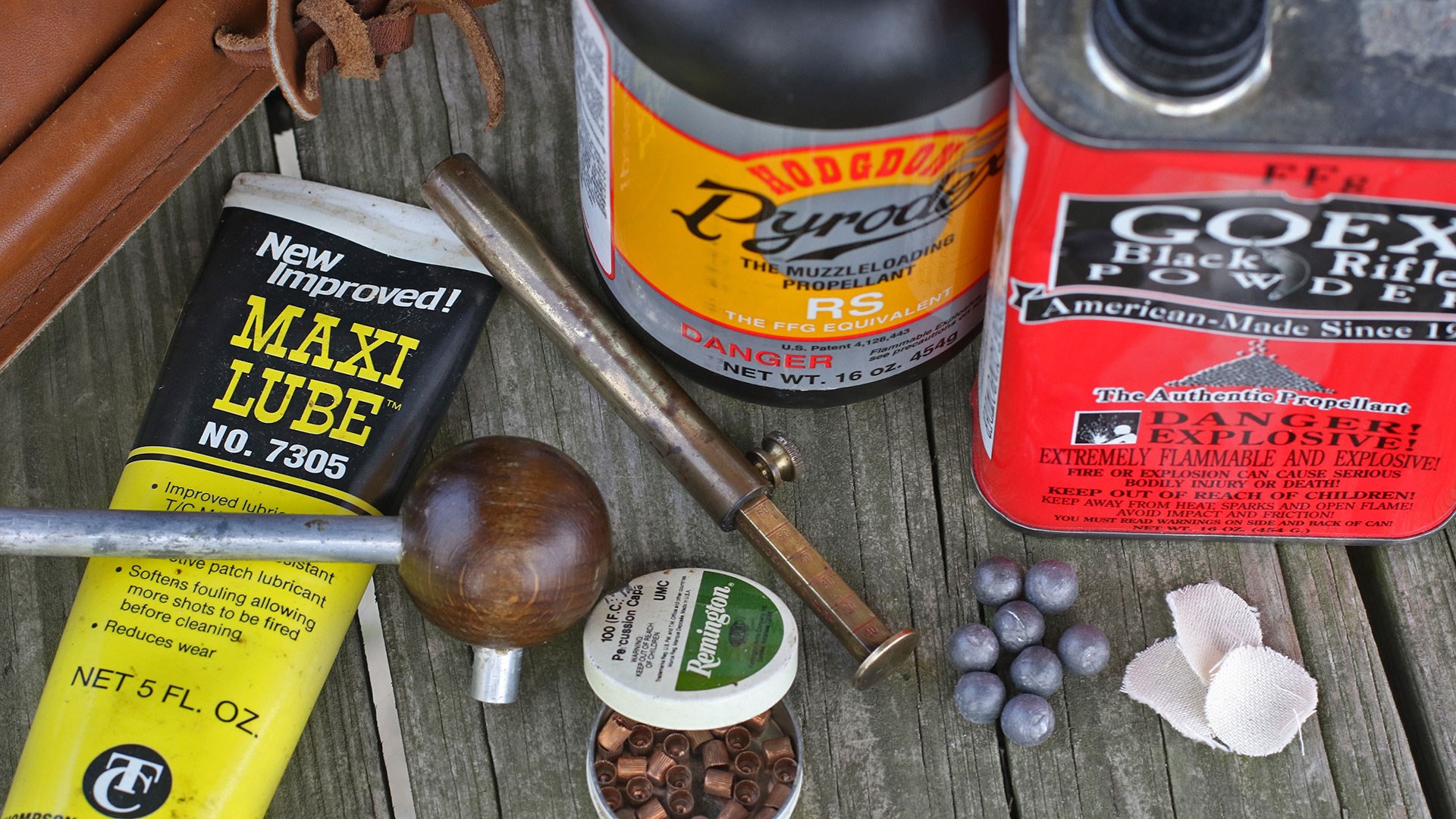 The tools and components you will need to assemble to shoot a traditional muzzleloader.

Before you get started shooting traditional muzzleloaders, you’ll need to assemble the correct tools and components. These include:

Powder: Blackpowder comes in different sized grains, designated between Fg and FFFFg. Most smaller bore muzzleloaders will use FFFg powder, while .50 caliber or larger rifles will use FFg.

There are blackpowder substitutes that produce less fouling, such as Pyrodex. Choose your black powder substitute carefully, as many modern muzzleloading powders are designed to be ignited by 209 shotgun primers and may not fire reliably with a traditional muzzleloader caplock or flintlock ignition system.

Powder measure: The powder load used in traditional muzzleloaders is measured by volume and not by weight. Powder measures are adjustable to vary the size of your load based on your needs.

Bullets: Your owner’s manual should tell you the correct size of bullet for your rifle’s bore. Traditional-style round ball and conical bullet designs are available in lead-free alternatives for those who shoot or hunt in an area that requires lead-free projectiles.

Patches or patch-making material: For shooting round balls, you will need caliber-specific, pre-cut patches or a suitable cloth material that you can cut patches from.

Lubricant: An appropriate muzzleloading lubricant, such as Wonder Lube or Thompson/Center Bore Butter, is needed for patches and conical bullets.

Ball starter: A starter is a tool used to start a round ball into the barrel without damaging the muzzle and will be sized to your rifle’s bore.

The first step in loading a traditional muzzleloader is to make sure your rifle’s bore is clean, free of oil and unloaded. To do this, run a dry patch down the barrel and make sure the rod goes all the way to the breech plug to confirm that your rifle isn’t already loaded.

Before loading a muzzleloader, it’s helpful to fire a few caps to make sure the nipple and vent hole into the breech is clear.

Measure out the appropriate amount of powder. Your firearm’s owner’s manual should tell you what the appropriate charge is for your firearm. Using the measure (and a funnel, if necessary) pour the measured charge into the barrel. Never pour powder directly from the can or a powder horn into the barrel. Tap the butt of the rifle lightly against the ground to settle the powder. When loading a muzzleloader, make sure you keep your hands and face away from the line of the bore.

Place a round ball on a lubricated patch over the muzzle of your rifle. The patch makes a gas seal around the ball and helps the ball engage the rifling. If you’re not using a pre-cut patch, you can start a ball into the bore in your patch-making material and cut off the excess.

Using the short end of the starter, start the ball and patch into the bore. Once it is seated in the muzzle, use the long end of the starter to push the patched ball further into the barrel. Then take your ramrod and push the ball all the way down the bore until it is seated on the powder. You don’t have to pound the ball onto the powder, just make sure that it is firmly seated. Remember to remove your ramrod from the bore and return it to the thimbles under the barrel. 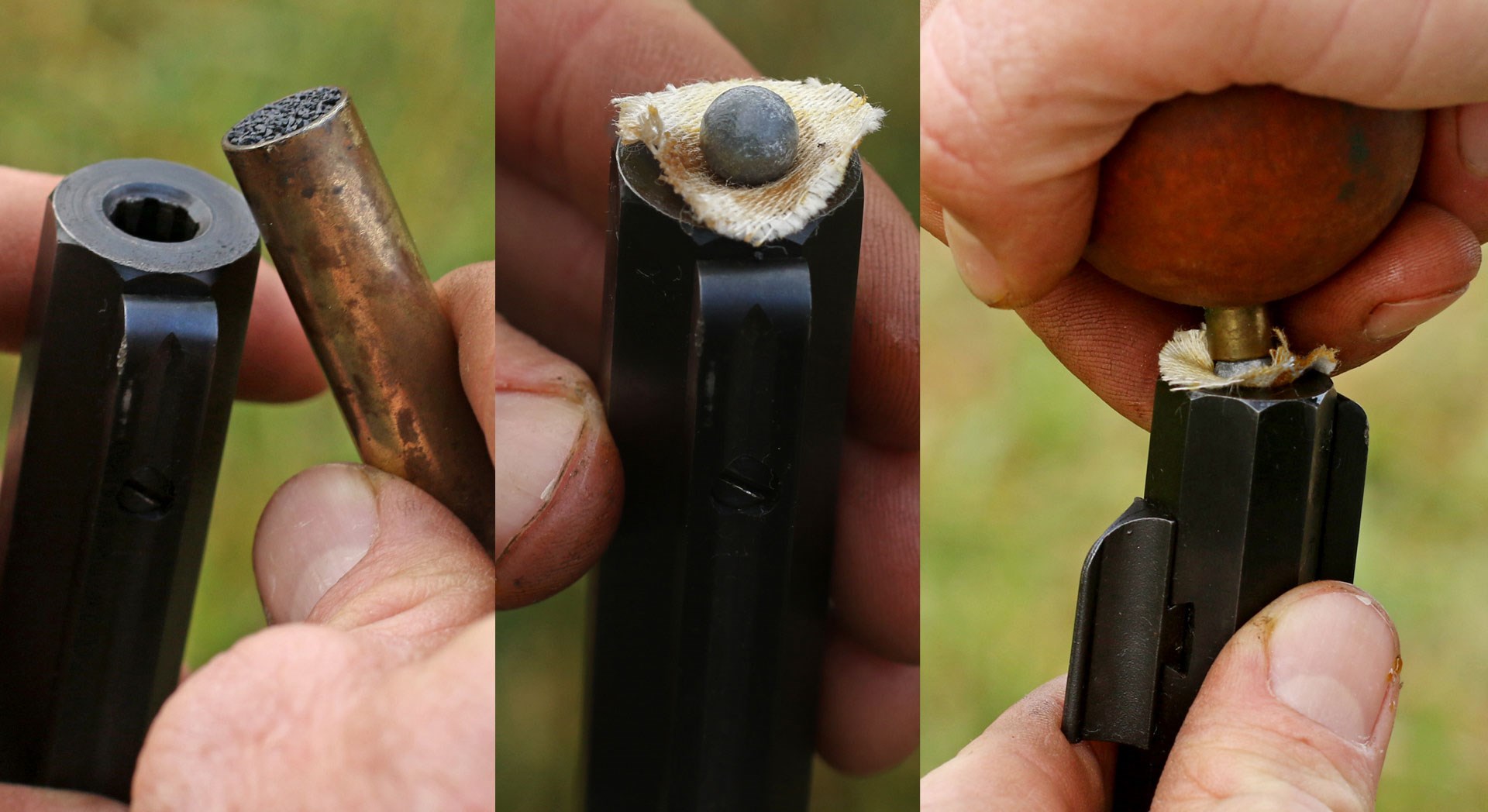 Loading a measured charge of powder. Placing a patch and ball on the muzzle. Using the starter to start the patched ball into the bore. 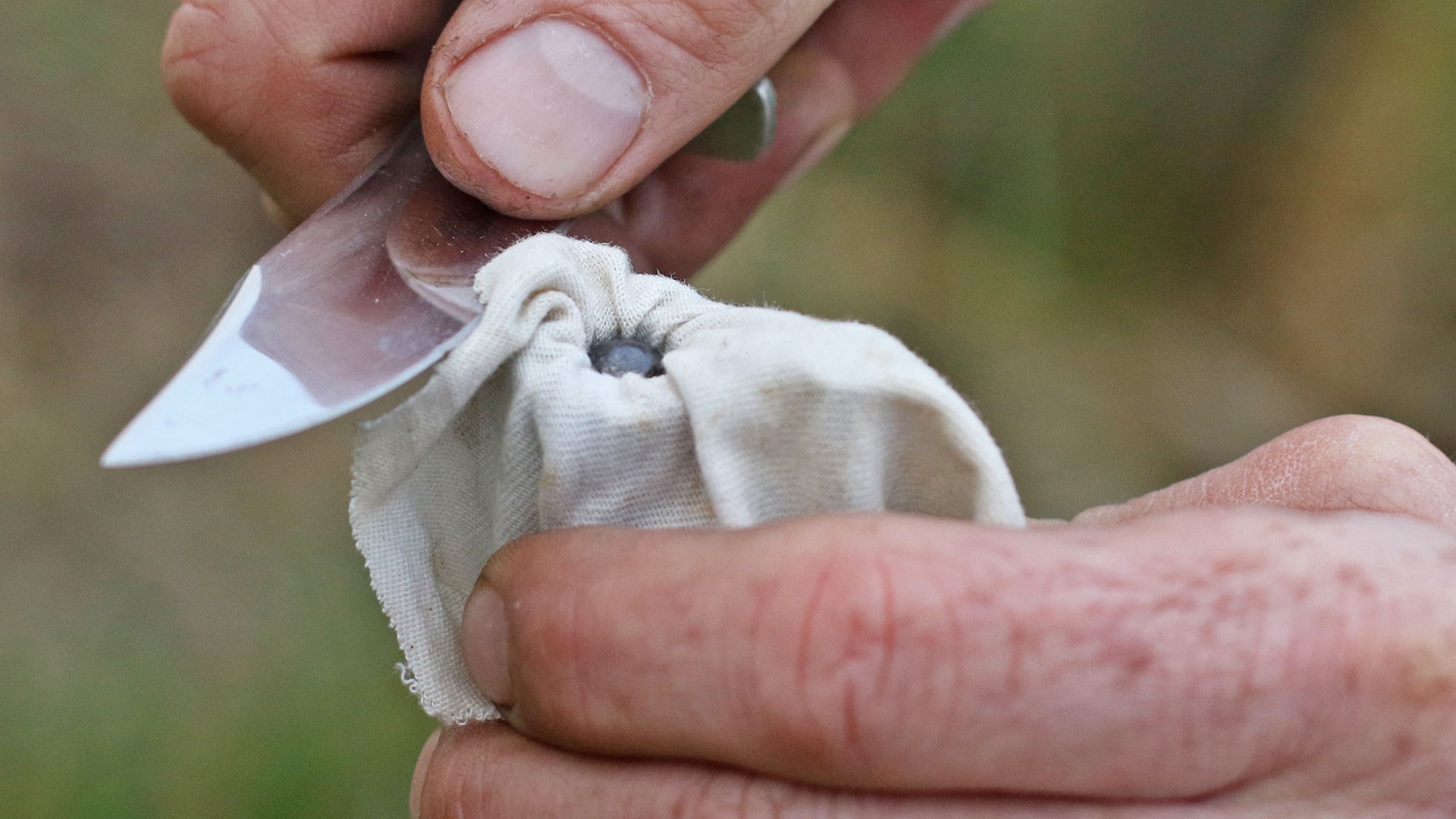 You can cut your own patch by starting a ball into the muzzle with a large piece of patch material and cutting off the excess.

Holding the rifle in the shooting position, bring the hammer to half-cock. Place a percussion cap on the nipple. 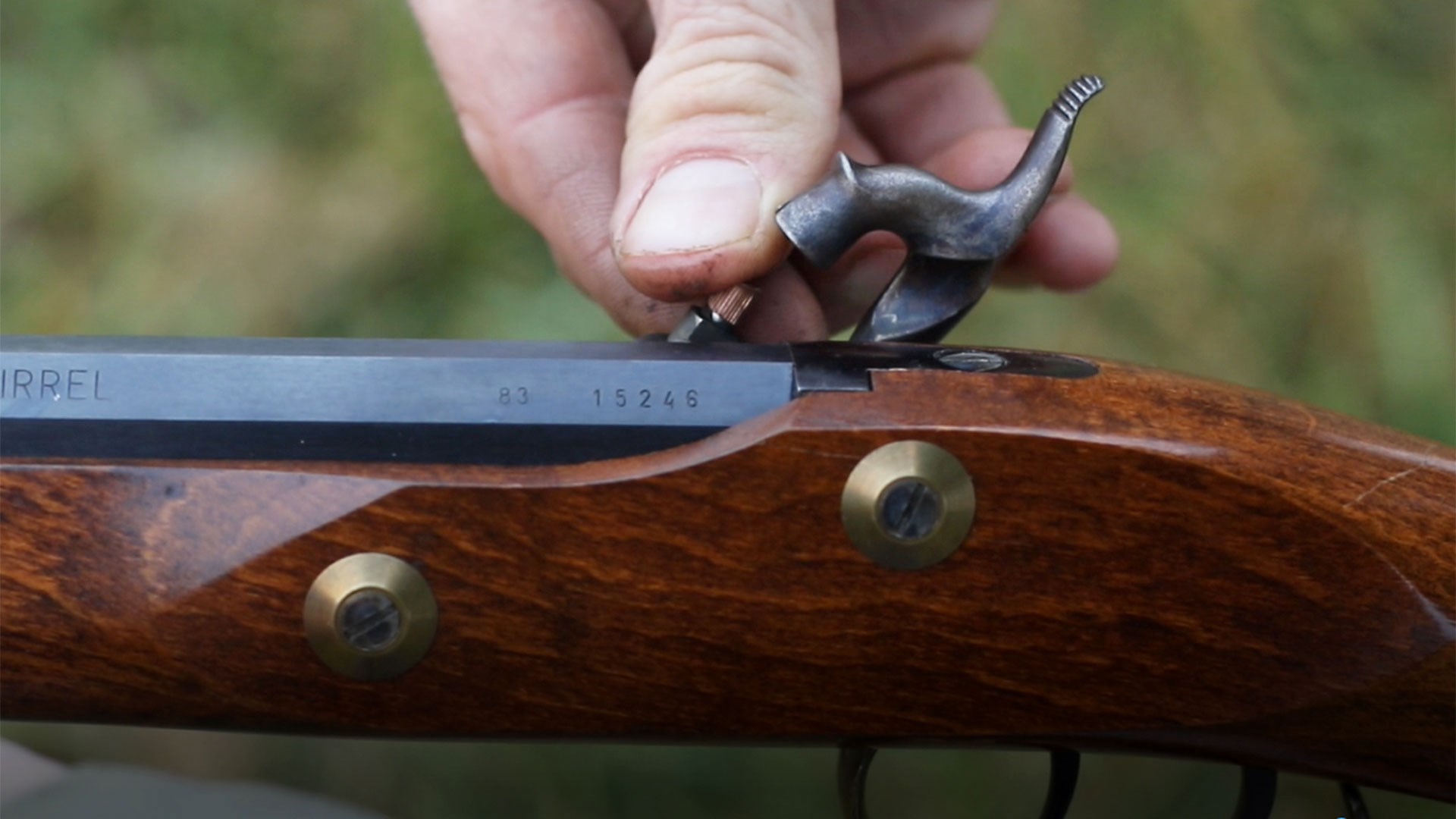 With the hammer at half-cock, place the percussion cap on the nipple.

With the rifle in the firing position, pull the hammer to full cock. You’re ready to fire. 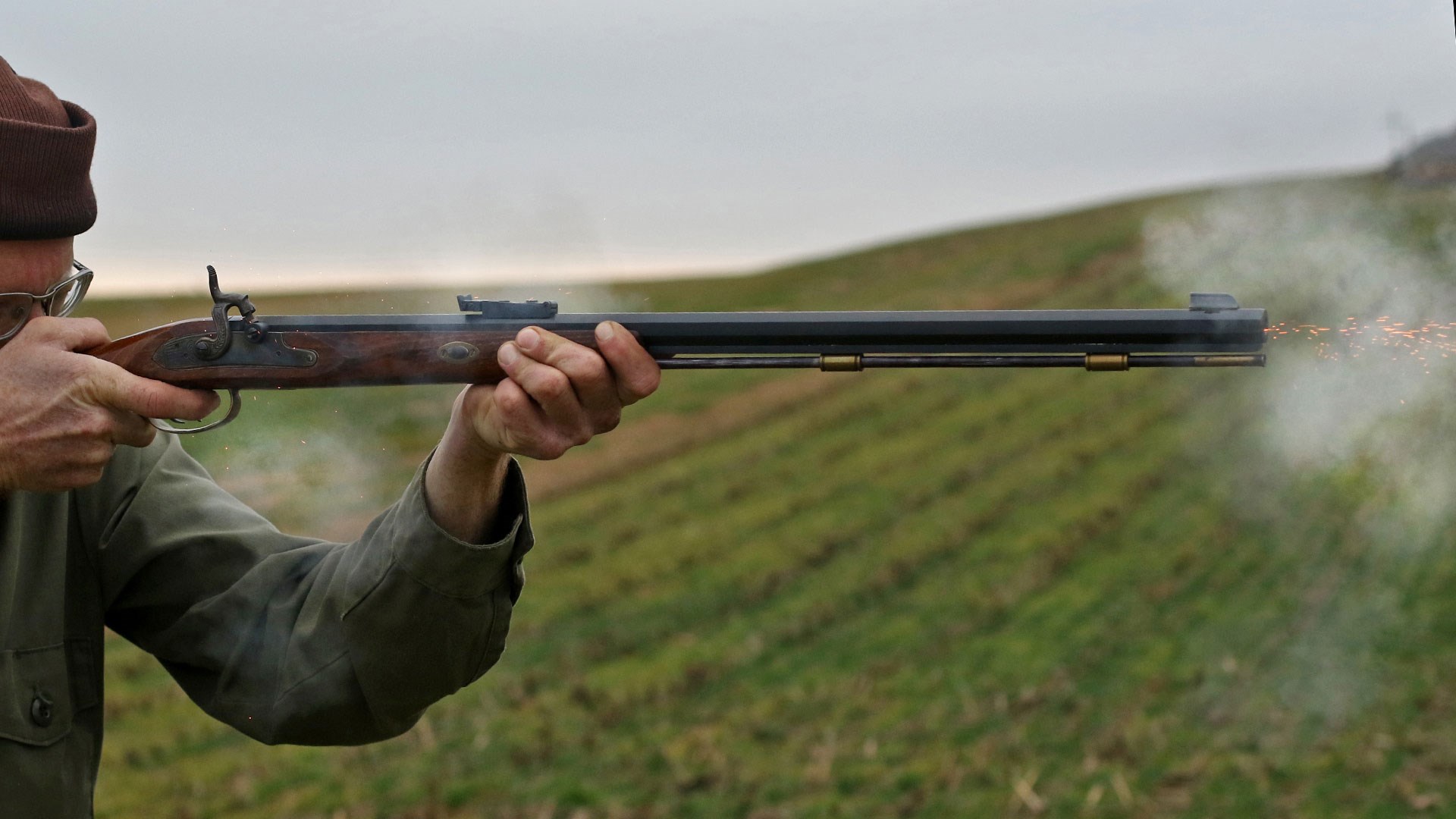 The reward for a successful loading process is a cloud of smoke.

Many traditional muzzleloading firearms use a double set trigger. This system is used to give a very light, yet safe, trigger pull. To operate double set triggers, with the rifle in the firing position and the hammer fully cocked, pull the rear set trigger firmly until it clicks. This sets the front firing “hair” trigger. A light touch of the hair trigger will fire the rifle. 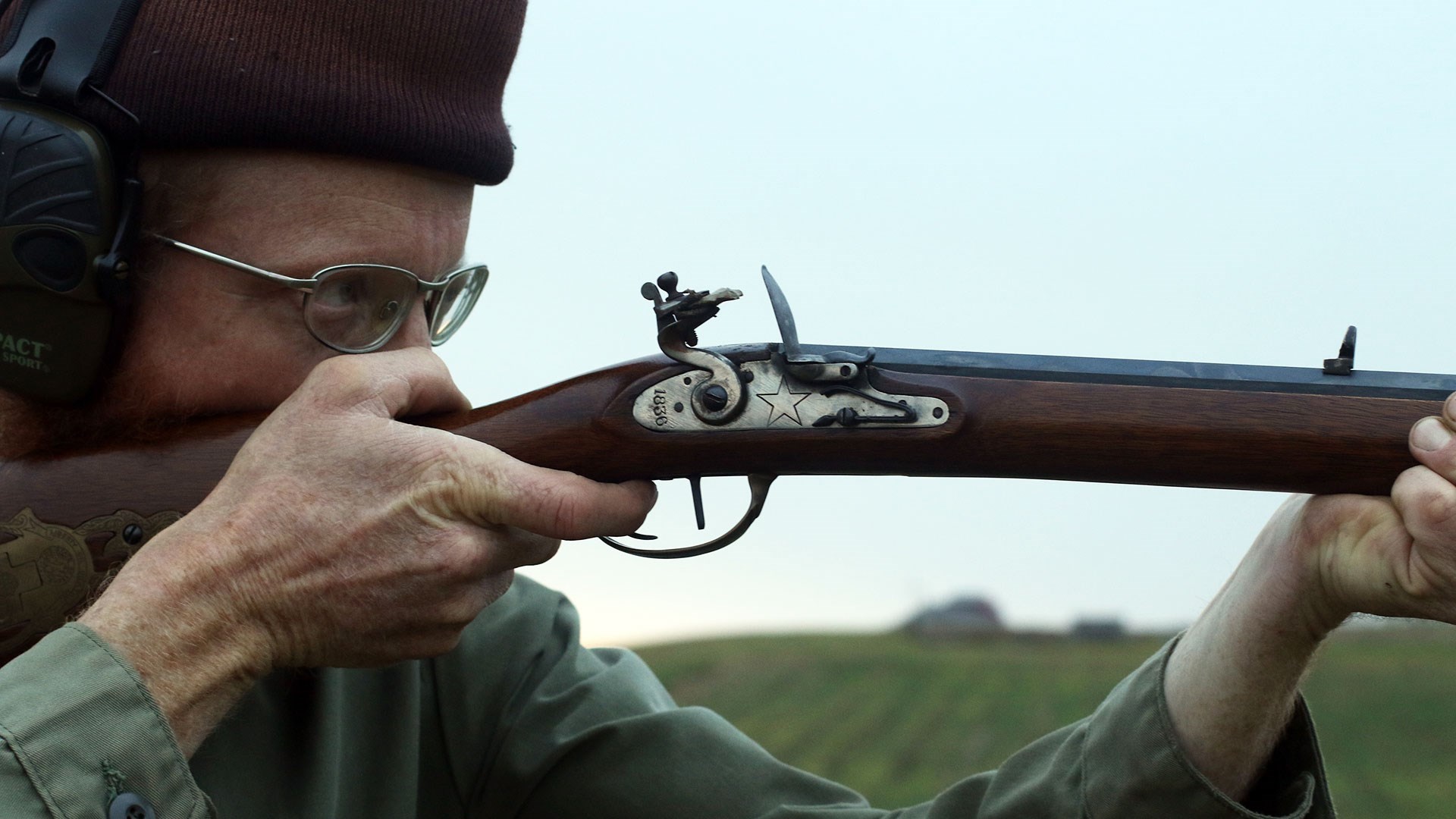 With a set trigger system, the rear set trigger is pulled to make the front firing “hair” trigger have a lighter pull.

A note on misfires. With all traditional-style muzzleloaders you will occasionally get a hang fire (a delay between pulling the trigger and the rifle firing) or a misfire (the rifle completely fails to fire). As it will be a few moments before you know which problem you have on your hands, keep a muzzleloader in the firing position and pointed in a safe direction for 60 seconds in the event that it does not fire.

Black powder is highly fouling and it may become difficult to load a ball after a few shots. When your rifle becomes hard to load, swab the bore a few times with a lubricated patch or bore cleaner.

While Minié balls are used in reproduction Civil War rifles and muskets, other types of conical bullets are also used in traditional muzzleloaders. These include the Thompson/Center Maxi-Ball and Hornady Great Plains Bullets. 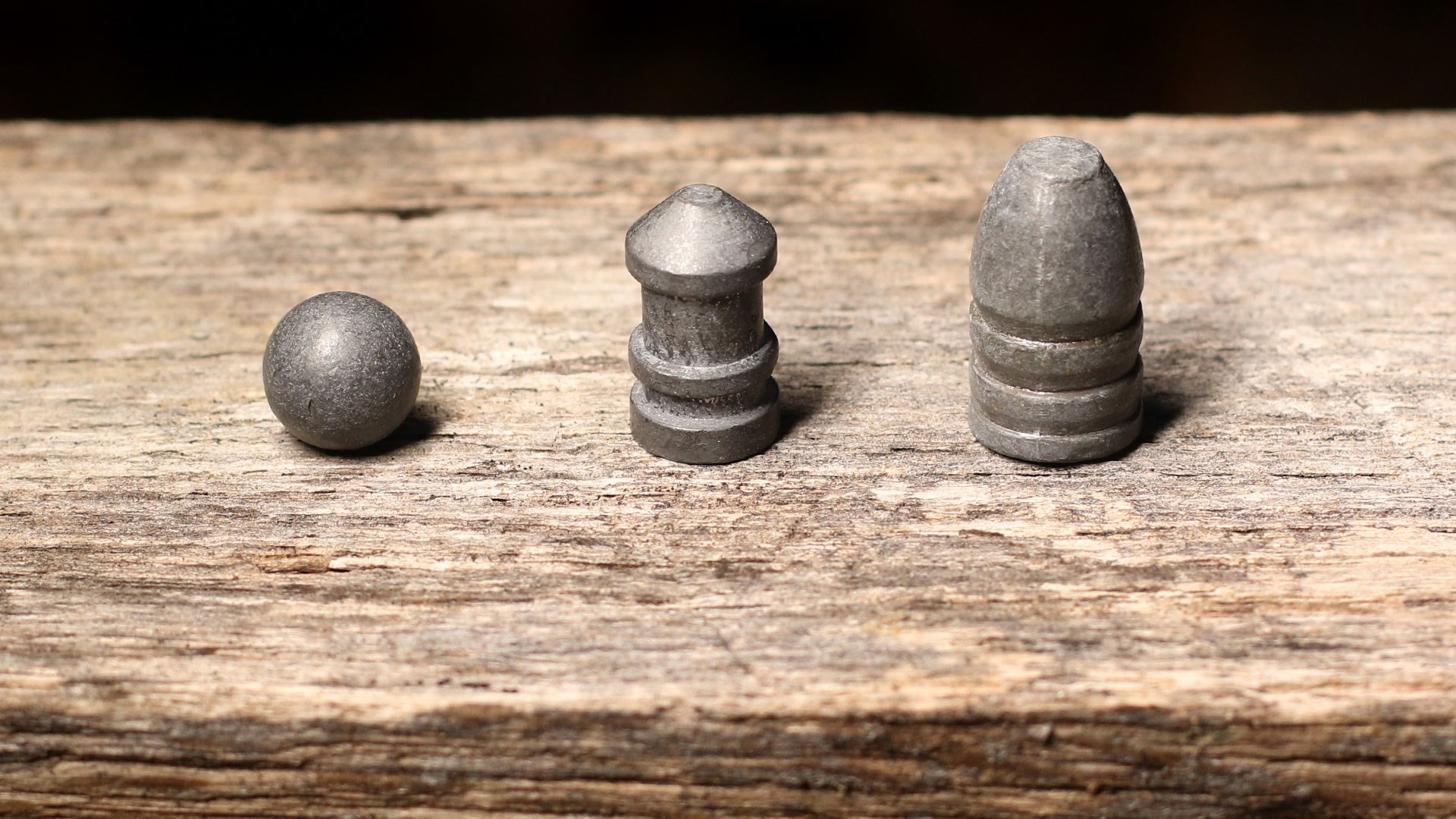 Three types of traditional muzzleloading projectiles (from left), a round ball, a conical bullet and a Minié ball.

Loading a Minié ball or conical bullet is the same as loading a round ball, except that you omit the patch. The bullet is placed in the bore right after the powder and rammed in place. 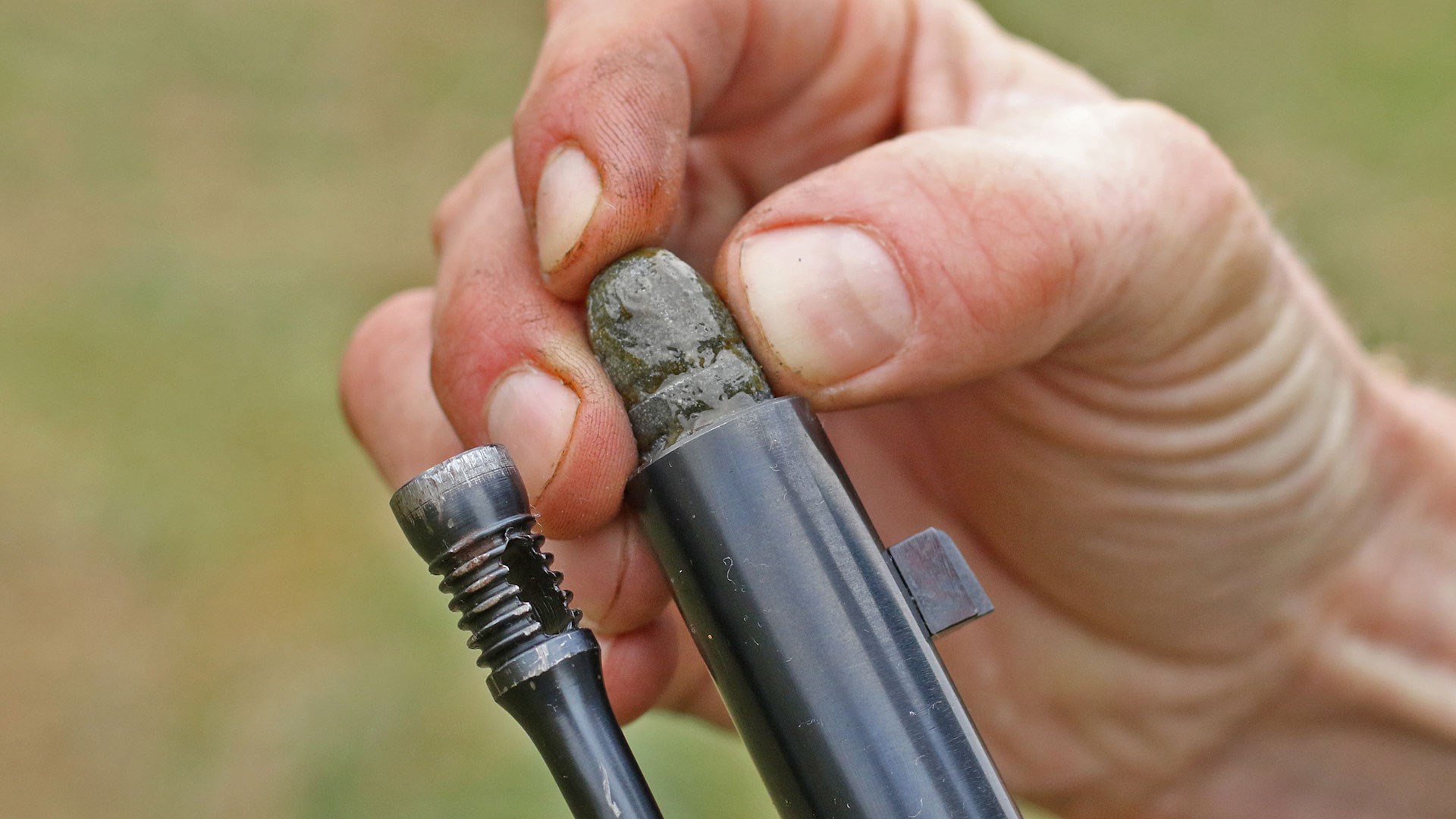 A lubricated Minié ball is loaded after the powder charge without a patch.

Many conical bullets come from the factory pre-lubricated. If not, make sure you apply a muzzleloading bullet lubricant to the bullet’s grooves before loading. 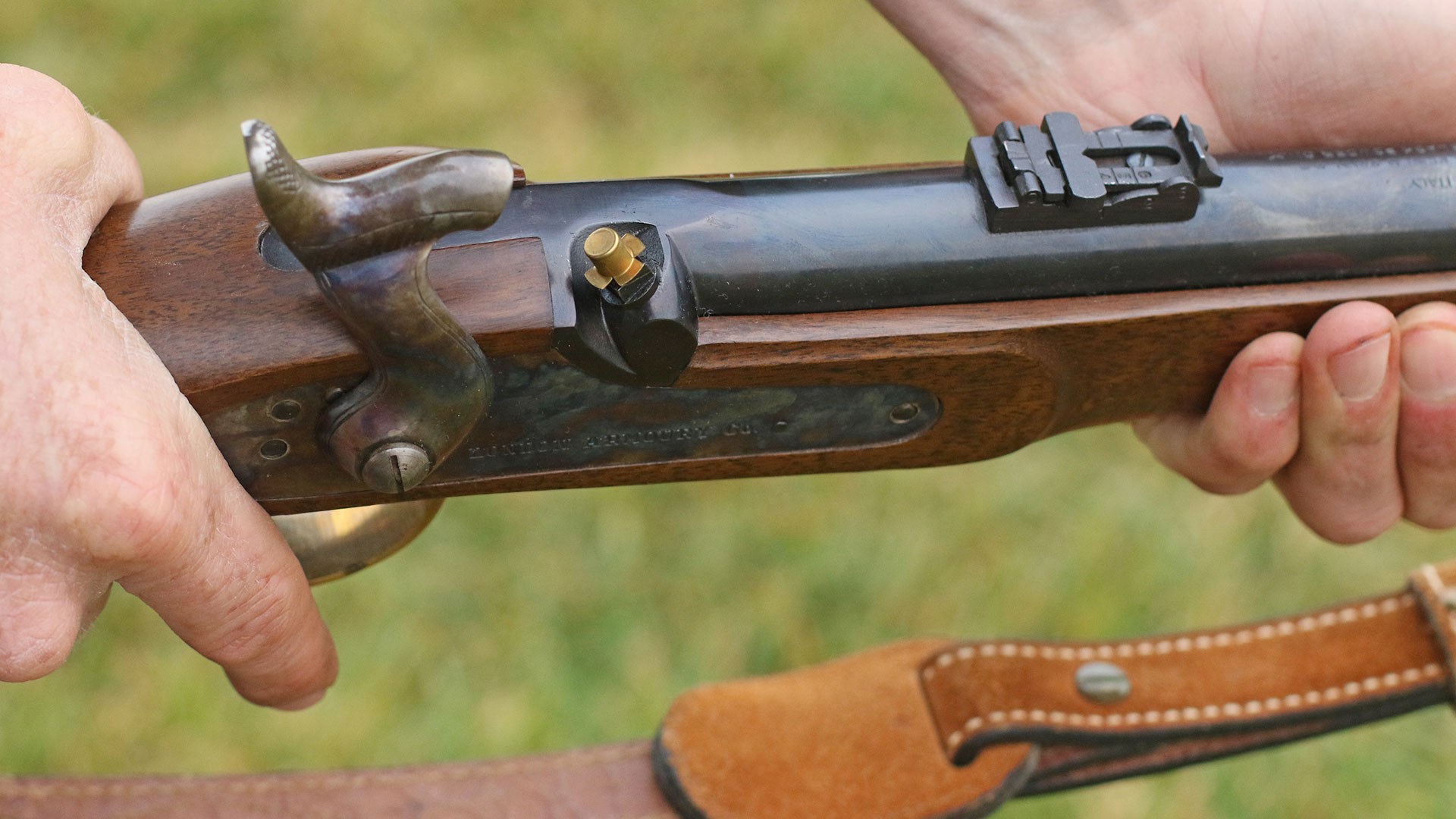 While many traditional muzzleloaders use the “caplock” or percussion cap system for ignition, the flintlock is an older method of ignition that was used into the mid-19th century.

Loading a flintlock is exactly the same as a caplock, until you reach the final step of the process. For a flintlock to operate properly, an appropriately-sized flint must be wrapped in a piece of leather and clamped in the jaws of the hammer. Once the powder and ball has been loaded in the barrel, with the hammer at half-cock, a small amount of priming powder is poured into the lock’s pan and the frizzen is closed over it. FFFFg powder should be used for priming purposes. When a flintlock is fired, the flint will scrape down the hardened face of the frizzen, pushing it out of the way as it sends a shower of sparks into the powder in the pan. This will ignite the priming charge, which in turn, ignites the main charge. 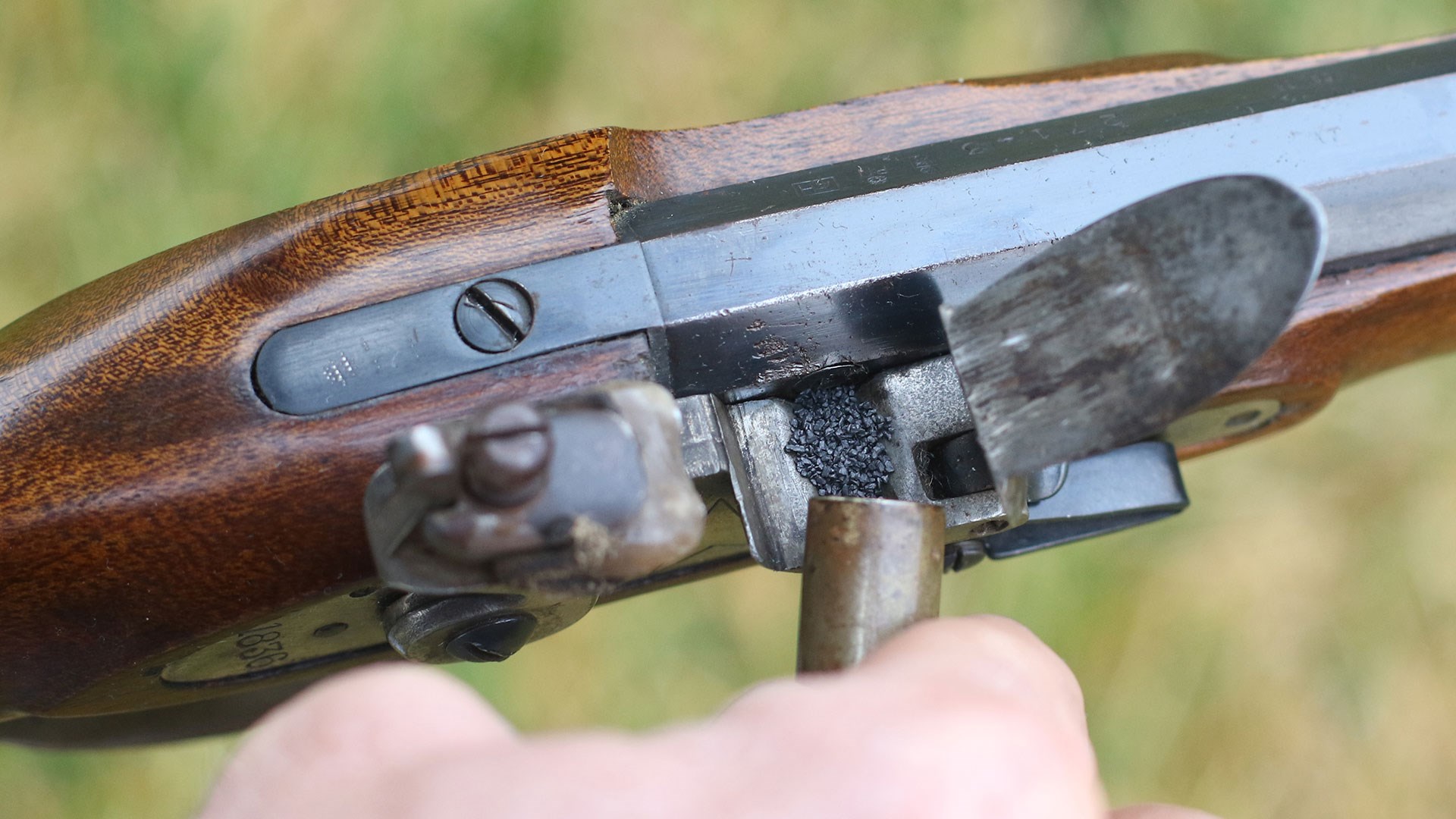 A small amount of FFFFg powder is poured into the pan of a flintlock.

The ignition system on a flintlock works by the flint scrapping down the hardened face of the frizzen and forcing it open, sending a shower of sparks into the pan and igniting the priming charge.

Once the fun of shooting traditional muzzleloaders has ended, the real work begins. Blackpowder and its substitutes are highly corrosive and, to prevent damage, you should clean your rifle the same day you shoot it. Disassemble your rifle, as per the instructions from the owner’s manual, removing the barrel from the stock. Flush the bore with hot water to dissolve the corrosive salts, followed by a muzzleloader bore cleaner. Swab the bore with oil or a preservative lubricant when you are finished. Care should also be taken to clean around the lock area.

Are you interested in learning more about how to shoot muzzleloaders? Sign up for an NRA Basic Muzzleloading Rifle Shooting Course.

Walther Arms: Beyond A Century In Business