Got a gun with that has seen better days? Perhaps Grandpa’s favorite gun was obviously “well loved?” Talented gunsmiths and other artisans are out there who can give your favorite firearm a much-needed face-lift.

For me, the candidate was a Colt Detective Special that had definitely seen better days. I purchased it more than 20 years ago for a song. The reason for my good fortune? The classic Colt snubby was the quintessential police trade-in: While its lockwork was mechanically sound, it possessed a mint bore, a solid lockup and more than its share of holster wear. However, the real eyesore was a large patch of rust on the left sideplate just over the rampant pony rollmark.

While all the aforementioned flaws placed the gun’s collector’s value somewhere between the sub-basement and the Mines of Moria, I saw a diamond in the rough. The serial number placed is production in the 60s and it has the original long grip frame of the 1930s, making it the perfect candidate for a nostalgic build: a Fitz Special.

In the end, my local gunsmith did a superb job and delivered what I wanted: An action job that rivaled an early-production Python. When closing the cylinder, the ejector star glided past the release latch as if traversing on ball bearings and garnering a click that was barely audible. A rich, high-gloss royal-blue finish adorned the pistol and added a regal touch of class to the pistol and was exactly what I envisioned in my mind—or at least it almost was. 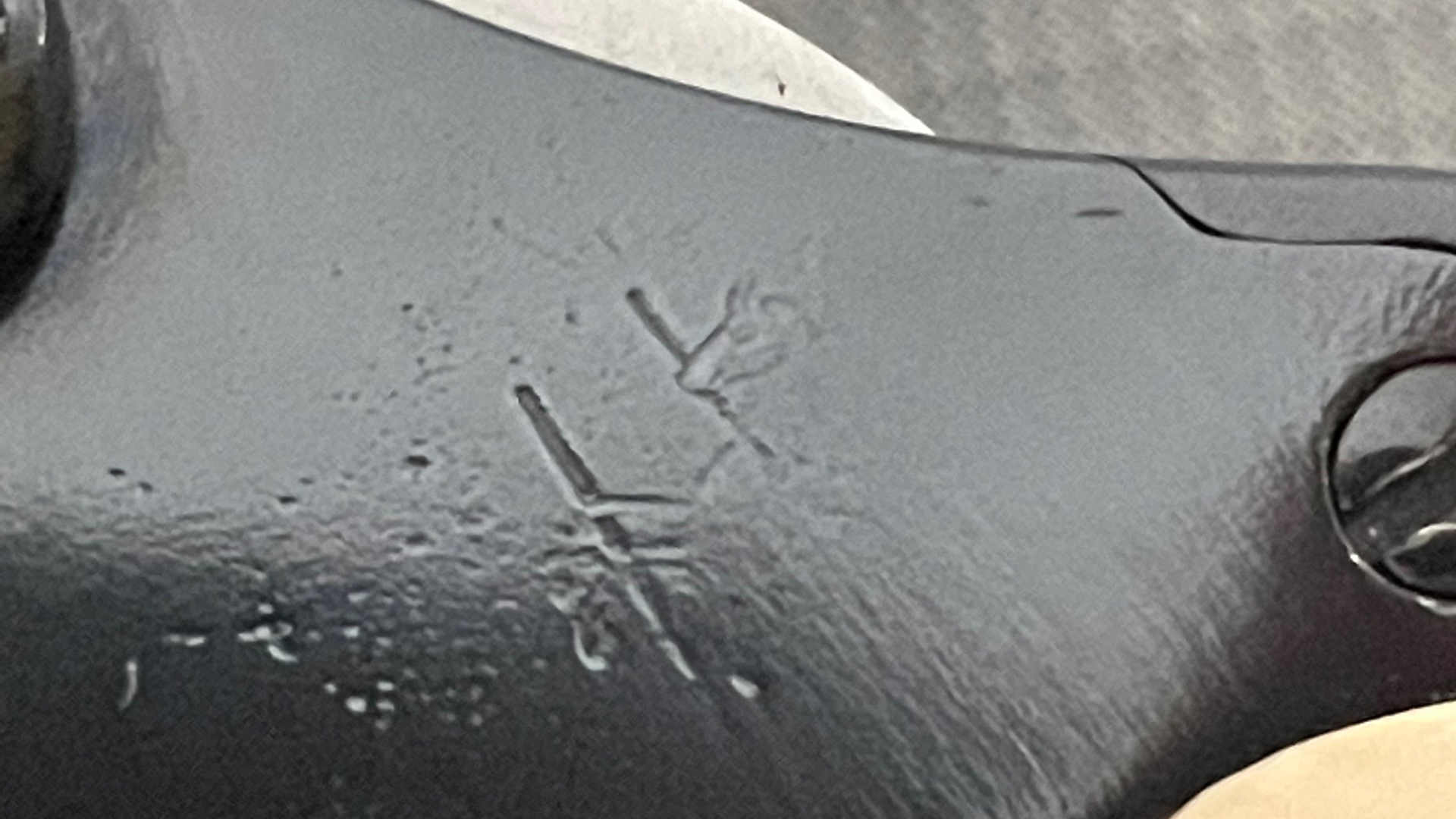 As part of the pistol’s original restoration more than 20 years ago, very little of the original rollmark remained.

In the process of removing the pitting and prepping the sideplate for its high-gloss finish, the rampant pony rollmark was virtually obliterated. My local gunsmith, who I had known since childhood, apologized, and claimed it couldn’t be helped. Moveover, none of his other supply of sideplates came even close to fitting to entertain replacement.

So, in the end, my only recourse was to accept my new beauty, warts and all. To lessen its affect, I purchased a pair of genuine-ivory stocks for it thinking they would offset the flaw—especially after the panels yellowed with time. It worked for a while. But eventually, whenever I’d remove it from my safe to admire my friend’s work, my eyes would always settle on that obliterated rollmark and I’d wish there was a way to fix the flaw.

When the blemish came up in a recent conversation with Bobby Tyler of Tyler Gun Works things took an interesting turn. 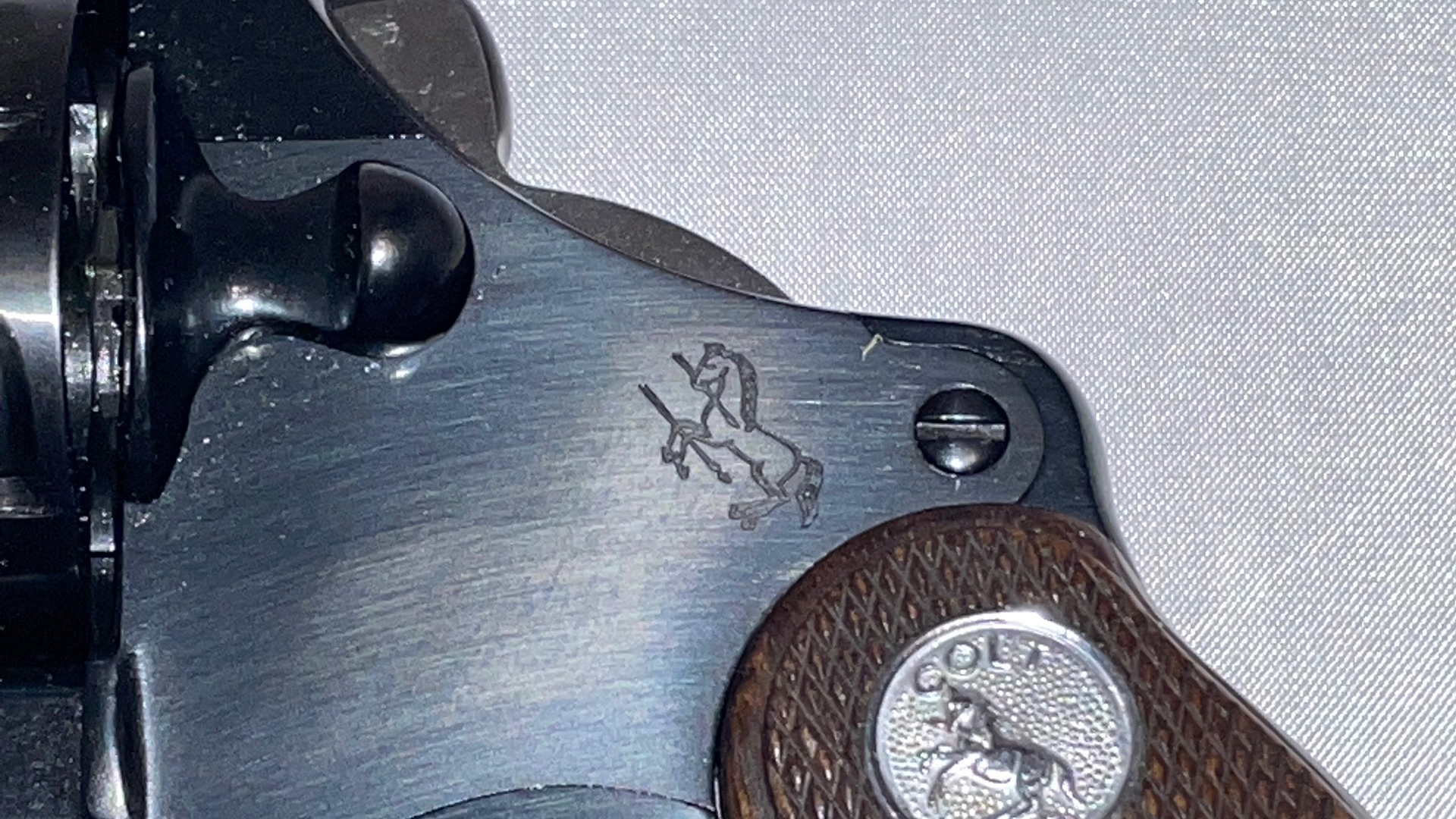 The staff at Tyler Gun Works did a fantastic job resurrecting the rampant pony to its place of prominence.

“I can fix that pony Bob,” he was quick to reply in contrast to his slow Southern drawl. When I explained that I didn’t want the added expense of fitting a new sideplate, he added, “No need for a new sideplate. I have all the old Colt rollmarks. I’ll replace it and no one will ever be able to tell.”

After making a name for himself by offering a variety of eye-catchingly elegant firearms finishes, Tyler has spent the last several years amassing a talented team of engravers and gunsmiths and the quality of the firm’s work is absolutely phenomenal. (But don’t take my word for it. Look at either his Facebook page or website and judge for yourself. Be sure to wear a bib though, because there will be drool involved.) Though the conversation was short, it resulted in my boxing up my cherished Colt and bidding it farewell.

While it was gone, the conversation with Tyler inspired me to investigate something that I’d always considered for the gun, but never pursued due to its flaw: a period-correct embellishment for a Fitz Special, and its ivory stocks would serve as the ideal canvas. As a means of research, I turned to an unlikely source: Facebook, namely a private group I belong to that’s dedicated to the snub-nose revolver.

Once there I posted an inquiry regarding recommendations for a scrimshander (one who practices the art of scrimshaw, or as dictionary.com defines it: “a carved or engraved article, especially of whale ivory, whalebone, walrus tusks, or the like, made by whalers as a leisure occupation.”) My post yielded fruit, a handful of names. Most were actively engaged in the trade, some had such tremendous backlogs (in some cases years’ worth) they weren’t taking on any more work.

Though slightly discouraging, that led me to Mike Hawkins of Mountain Ivory Shrimshaw. After a chat via social media, I soon discovered Hawkins was exactly the man for whom I had been searching. In addition to offering many examples of his impeccable work, he specializes in ivory, works quite a bit with hand-carved pistol stocks, and as luck would have it has more than 30 years of experience doing exactly what I wanted regarding embellishment: A monogram, but not just any monogram—one that would truly complement my Colt Detective Special.

Given it’s 1930s-era Fitz conversion, whatever embellishment I selected had to be the same timeframe and one such period-correct monogram came to mind—that of Gen. George S. Patton who had his initials GSP carved on his iconic Colt SAA by an anonymous scrimshander and in the stocks of his 3.5-inched barreled Smith & Wesson Registered Magnum.

Hawkins was thrilled at the opportunity to take on such a nostalgic project, and I was equally so, especially having located someone who specialized in carving initials. I immediately mailed my pair of ivory stocks. Enthusiasm aside, however, the project wasn’t quite as smooth as I would have liked. The culprit? My own indecision. While researching Patton’s monogram for this project I learned that while his monogram did appear on the stocks of two of his handguns, the placement of monogram was different for each gun: It appeared below the screw hole of his Colt SAA and above the screw hole of his Smith & Wesson Registered Magnum. 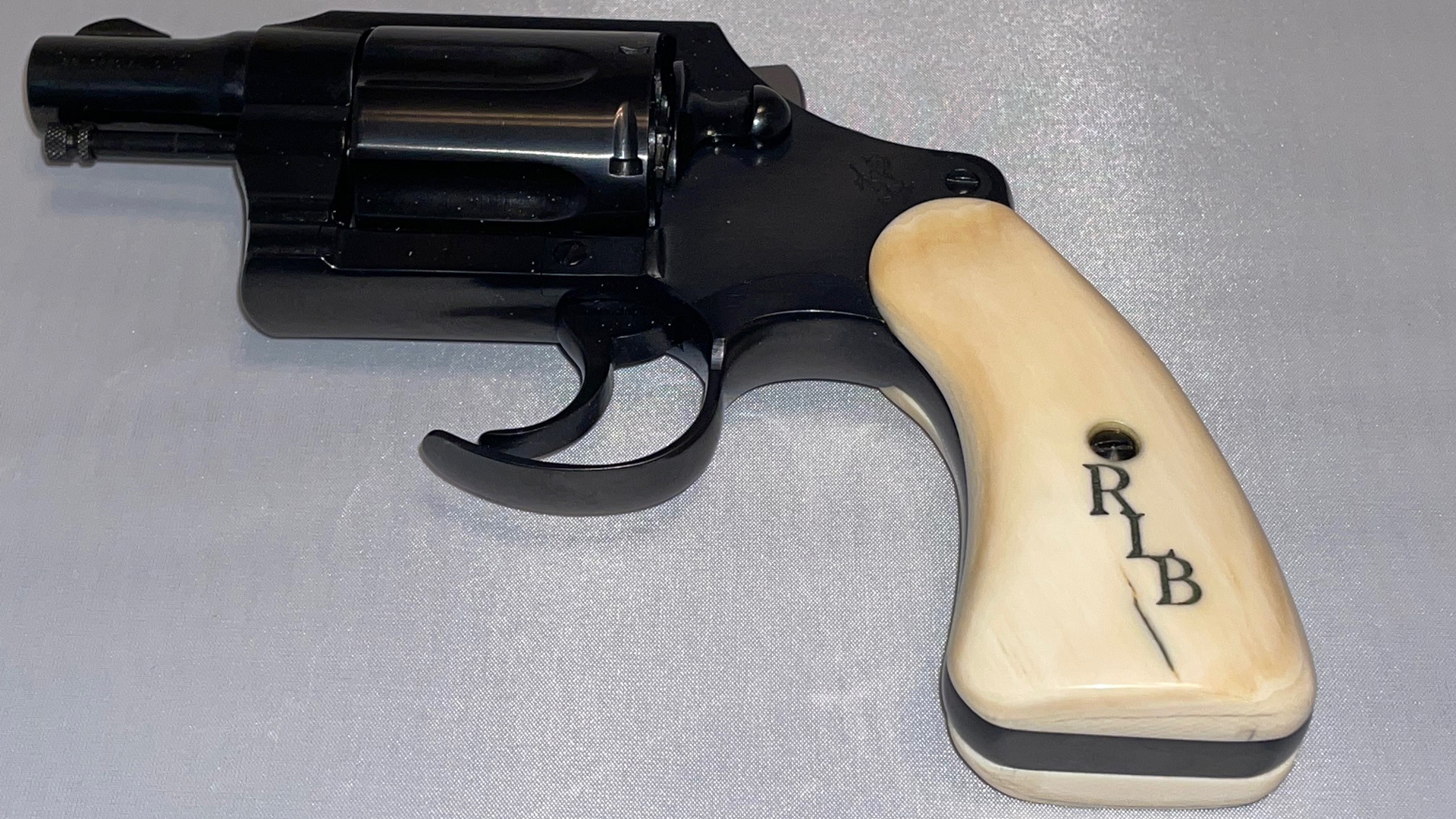 Mike Hawkins of Mountain Ivory Scrimshaw replicated a classic monogram using the author’s initials and expertly carved them into each of the genuine-ivory stocks.

I’d soon be faced with the dreaded question, “Do you want above or below?” and I couldn’t decide. Thankfully, Hawkins was prepared for this. He carved a sample of the monogram to scale on a scrap of imitation ivory and texted me a photo of it so I could see what the end result would look like and confirm that it was indeed what I wanted. Then he traced the outline on my stocks on a piece of paper and drew examples of the monogram showing what the placement would look like above the screw hole and below—texting each sketch to me to serve as examples.

In then end, though I still couldn’t make up my mind. I didn’t want such a monumental decision to be left to the flip of a coin, so I circled back to the members of that Facebook group, where I posted photos of the snubby along with the sketches and asked their opinion: Above or below? I did the same with friends, fellow gunwriters and even two of the wisest people I know: my mother and my wife. To my surprise, the majority told me the monogram would look better below the screw hole.

In the end, I couldn’t be happier with the decision. New friends were made along the way and my classic Colt got some much-needed bodywork, its rollmark restored and a fresh coat of paint, so to speak. Now, if I could just settle on a period-correct front-sight enhancement to aid this editor’s trifocal-bespectacled eyes…