January 31, 2023 Guns In The News
Home»Commentary»Efficiency Vs Speed
Commentary

A consummate action shooter consistently reaches for that perfect balance between speed and accuracy. The paradox of such a balance is that the cost for one is at the expense of the other. Shoot too fast and the price tag for losing control is inaccuracy. Conversely, spending too much time verifying or reverifying alignment attenuates those precious tenths of a second which could mean the difference between success or failure in a critical incident or professional standing in a qualification or competition.

Several factors may contribute to or compromise the balance of speed and accuracy. Shooter athleticism, manual dexterity, visual acuity, physical and mental conditioning, skill level and ability to perform under duress just to name a few. However, the balance is more often the result of control level and efficiency of movement.

Although two sides of the same coin, interrelated and inextricably bound in a symbiotic relationship, speed and accuracy can be viewed as separate shooting performance measurement components. Accuracy is nothing more than marksmanship or your ability to hit what you’re aiming at. Whereas, according to champion competitive shooter Rob Leatham, “Speed is no more inaccurate than slow is accurate.”

The mark of any professional is making the performance of their skill, especially under duress, look easy. A major league baseball player can consistently hit a ball moving faster than a minor league or collegiate-level player. The same applies to a grandmaster or master level action shooter who can sustain accuracy at greater speeds than their lower-ranked competitors.

The very best of the best shooters have trained themselves to push the very limits of high-speed accuracy with equally impressive consistency.

What three factors contribute to such high-speed accuracy and consistency? Proficiency, mechanical and mental efficiency:

Proficiency, the state or quality of being competent, is an integral part of efficiency. It is well-known throughout the professional shooting community that you can’t do it fast if you can’t do it at all. For example, if you’re trying to deliver ten rounds into a four-inch target at twenty-five yards from your holster in under fifteen seconds and you can’t make that round placement during slow fire (not on a timer), then what is there to measure if you don’t have the basic skill and requisite proficiency with your grip, hold and fire control? 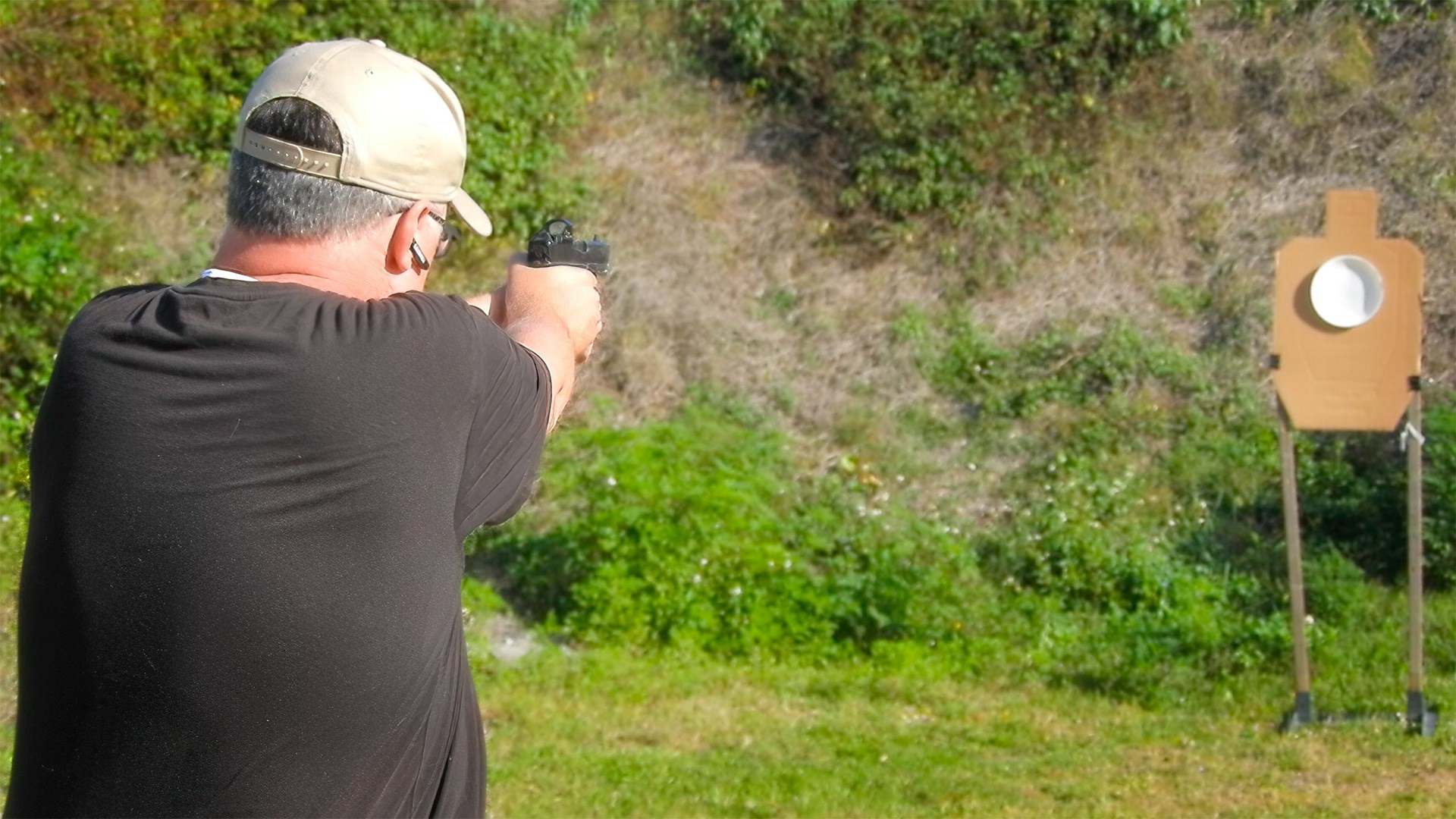 To further develop proficiency, it may be a good idea to initially reduce both the round count and/ or the target distance. Perhaps starting with five rounds at the same size four-inch target at the fifteen-yard line may be a good starting point. Once you’ve gained round-placement consistency at this distance and with the lower round count, then start adding rounds until you can center-punch ten of them at fifteen yards.

After gaining this proficiency then move the target back out to twenty-five yards and take it from there working your way up to the requisite ten rounds at the twenty-five-yard line without a timer. Once you have developed the skill to do it and can consistently demonstrate that accuracy component, you now have the proficiency needed to start measuring how long it takes to perform that task.

Start with doubling your time. Can you do it in 30 seconds or less? When the time comes that you can meet or exceed this standard you can then take it down to 20 seconds and then eventually you will reach your 15 second performance goal. However, without proficiency in the basic skill, there’s no chance of doing “it” faster.

First step to mechanical efficiency is finding your maximum mechanical capability. If, for example, you may be working toward a sub-second draw from concealment to a single shot upper-thoracic A-zone hit, you may first want to face the berm with no target in front of you. On the buzzer, and while maintaining optimal safety, draw from cover and orient your muzzle to the berm with no target which eliminates building a more controlled grip, as well as the aiming and verification process leaving only the mechanical capability of fire control at maximum physical speed. If you run this a dozen times and your maximum mechanical speed is 1.08 seconds without grip, alignment and sights verification, then it’s not physically possible to go any faster after layering in those components. If, on the other hand, you do have the capability to break a one-second draw into the berm then you’re in business and can work toward building a better grip (control) and alignment.

The shortest distance between two points is a straight line. Especially when it comes to pistol presentations, if you need to get that muzzle oriented with the target in a hurry, then you take the most direct route and not the most circuitous. You don’t want to go fishing, bowling or any other non-linear trajectory on the way out you want the shortest distance between two points.

Hundredths of a second are added to running splits (multiple rounds on the same target) if there’s either too much hang time, variance in your six-to-twelve sight/ dot movement or not enough control to return the muzzle to the target. The pros make it look effortless and to a certain extent it is less effort. Less tension is less energy input into the steering or driving the gun. Less input translates to more energy efficiency in that there’s no extraneous input into the muzzle orientation with the target. The only remaining task is your fire control process.

The same concept applies to transitions (movement between targets). Adding any bit of over-travel or under travel movement between targets adds nothing but time. Rapid muzzle movement and your ability to stop the muzzle in the visual center of the next target are what build that proficiency which you can later measure on a timer.

Mental efficiency is the mastery of what’s going on between your earmuffs. Novice shooters try to do everything at once whereas true professionals solve one problem at a time. Trying to have your mind think about more than one thing at the same time is like having one foot in two different canoes. It doesn’t work so well.

Lastly but certainly not least, is to reach out to the target with your mind. Your mind must be engaged. It must “get there first” as the body cannot go where the mind has not been.

Efficiency equates to speed if there is no wasted energy, there’s no wasted time. Shooting proficiency combined with mechanical and mental efficiency introduces an arguably beneficial pathway to speed.