August 10, 2022 Guns In The News
Home»Commentary»Engineering A Solution: Inside Walther’s PDP F-Series
Commentary

The Walther PDP F-Series is a 9 mm duty pistol intended for serious use—competition, personal protection, law enforcement—for women, and it has well-thought-out features and ergonomics intended to meet their needs. So, how did Walther approach it? In short, with input from serious women shooters and engineers at every step of the development and design process.

Setting out to adapt its Performance Duty Pistol (PDP) to female shooters resulted in Walther creating a completely new frame. Although it has the lines of the PDP, especially through the slide, the rear of the F-Series frame is completely different, dimensionally, in its trigger reach and even in its striker-fired operation. This isn’t just a new backstrap and a marketing campaign—it’s a new gun.

With the PDP, Walther created one of the top (and most accurate) duty handguns made anywhere by anyone. You can read about what Field Editor Justin Dyal thought in “Best In Class? Walther’s New PDP”, and you can look up the two NRA Golden Bullseye awards it has notched. So, Walther wisely started with that solid foundation and kept the PDP Compact’s excellent 15-round magazine as well.

When asked about what makes the F-Series different, Carl Walther GmbH President and CEO Bernhard Knöbel said, “Number one is the trigger reach. Circumference is important, but shape is more important. It has a grip that has a little bit of a humpback that forces the female hand into the frame and closes the gap underneath. That makes the biggest difference, I think. Then there’s ‘rackability’ of the slide. From shooters who handle the F-Series for the first time, you hear, ‘Wow.’ That’s the biggest compliment you can get.”

Those not in the competition-shooting arena might not know that Walther builds target handguns, such as the GSP used in Olympic rapid fire, as well as LP500 airguns used at a very high level. Each of those guns must be custom-fitted, so Walther measures the hands of each shooter and builds them one at a time. It developed a database of thousands of women’s hands that aided in the creation of the F-Series. But the company also received input from some of the top women shooters and trainers in the United States, including Gabby Franco and Tatiana Whitlock. The latter told me how modified frames were shipped back and forth between here and Germany. Material was added or removed each time to get the frame dimensions just right. It’s north of $100,000 to have a new frame mold created. That, ladies and gentlemen, is called an investment.

So how did they do it? Walther concentrated on three areas. The first was trigger reach, followed by contouring the grip to better fit the smaller—and not as wide—hands of most women, and finally, as Knöbel called it, “rackability,”

Compared to a standard PDP (r.), the F-Series has had its grip circumference reduced a full inch, although there is more material at the beavertail. The sides are thinner throughout. The trigger blade has been moved rearward more than 1/4″. In addition to its ergonomic considerations, the PDP F-Series features mechanical changes, including an all-new, two-piece striker assembly that aids in reducing cocking effort by at least 20 percent.

Compared to a PDP Compact, the circumference of the F-Series grip was reduced from 7 7⁄8″ to 6 7⁄8″. Gone are the subtle swells for the fingers of the PDP—jettisoned to get the grip more svelte. The sides of the frame were slimmed from 1.187″ to 1.151″. Also, the beavertail of the grip frame was re-designed to better fit female hands. It has more material because women’s hands, typically, aren’t as bulky at the web. This allow a woman’s hand to get a proper high grip, keeping the gun anchored. The difference might seem mathematically small, but when combined with reduced trigger distance, it is like night and day. By reducing the frame’s fore-and-aft dimension, it allows smaller-handed shooters to better reach the reversible magazine release on the grip frame, too.

The F-Series employs a new two-piece striker design, differing from the original PDP and providing a factory-stated 20 percent reduction in force required to rack the slide. My own measurements averaged a 22 percent reduction compared to a standard PDP Compact. There was also a noticeable difference between the two guns when it came to depressing the bilateral 2″-long slide locks, with the F-Series being decidedly easier to release. This is still a recoil-operated gun, one that digested 400 rounds through two different models, but the amount of effort required to rack the slide and release the slide lock is greatly reduced by not having to overcome the weight of the striker spring as part of the cocking cycle.

The trigger’s shape was re-designed and moved backward 0.29″ where the finger engages its face. It pivots at the same point as the PDP, but has been re-contoured to be easier to reach with small hands. It has a blade safety in its front face, and it broke crisply at a 4-lb., 12-oz., average with a short positive reset. A coil trigger-return spring moves the trigger back into firing position with a positive click. Depressing the trigger moves the trigger bar in the frame’s inside right side, pushing up a tab to clear the passive firing pin safety then releasing the striker to go forward and strike the primer of a chambered round. 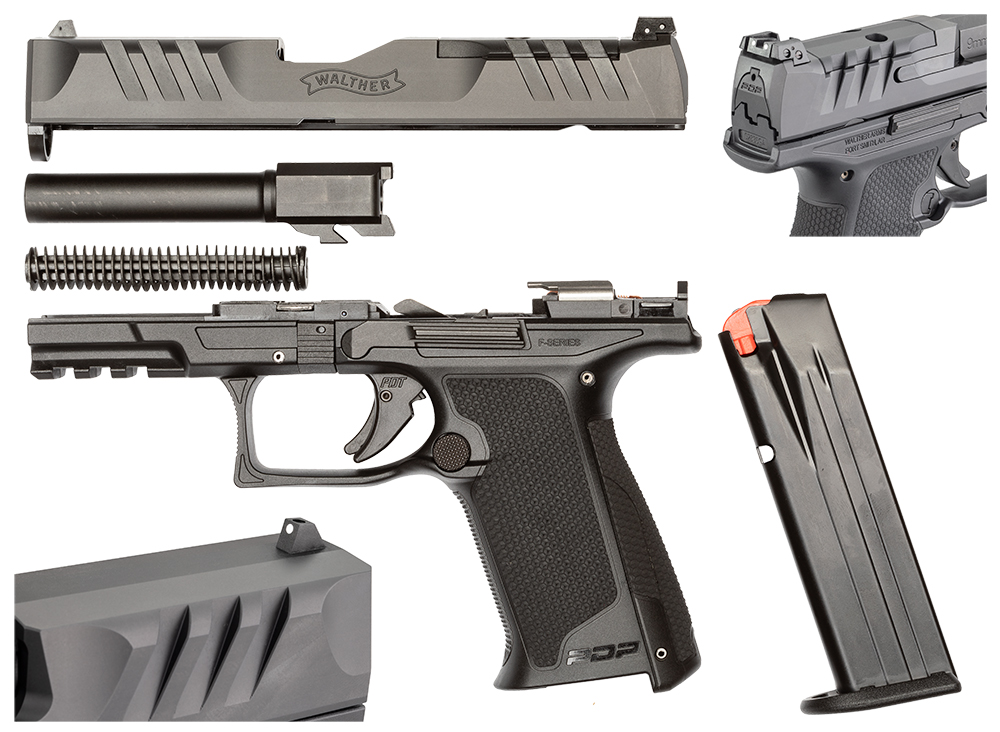 The optics-ready F-Series has six deep serrations cut in the slide called “SuperTerrain” by Walther. While the grip has been completely reworked, the front of the frame is fully compatible with PDP holsters. Sights are a fully adjustable rear with a replaceable post front.

Barrel lengths are either 4″ or 3.5″, and the former was used for accuracy testing. The steel guide rod is surrounded by dual recoil springs on the 3.5″, while a flat-wire coil spring is used on the 4″.

When it comes to the metal parts, particularly the slide and barrel, they are machined on CNC machines by Walther in Ulm, Germany, Tenifer-treated and then blued over the Tenifer.

Some commented that the F-Series guns, like all PDPs, are visually top-heavy. In the hand, it does not feel so. That is due to the three, deep cocking serrations on the slide’s rear and three forward of the ejection port, called “SuperTerrain” by Walther. They are 0.196″ wide, taper downward, are well radiused and are very effective in gripping the slide. Those serrations extend up into the cover plate for the mounting of an MRD with Walther’s Gen2 optics cut. One plate of the owner’s choice will be supplied via after-purchase voucher. 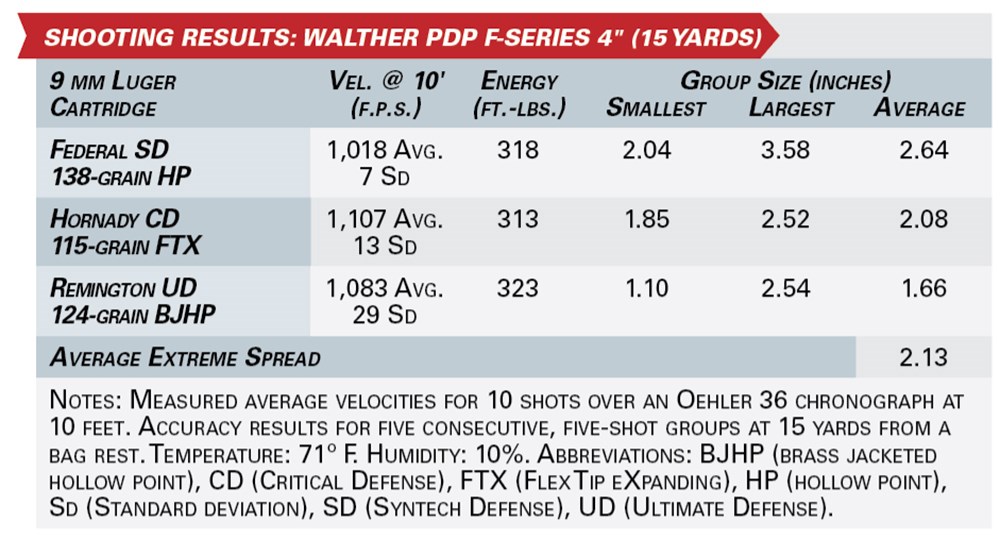 Although the slides and barrels are machined in Germany, the gun is assembled with the remaining U.S.-made parts at Walther Arms in Fort Smith, Ark.—on a line next to where the PPK and PPK/S are made. In fact, the idea for the F-Series began in Fort Smith—welcome news, no doubt, to the estimated 40 percent of new shooters who are women.

When I visited Carl Walther in Germany last year, I was made aware of the commitment Walther made, under the leadership of Knöbel, to develop a new pistol that really was designed for women. I think Walther on both sides of the Atlantic succeeded. That said, my man card may be in jeopardy as I am neither a woman, nor do I have particularly small hands, but I found myself preferring the F-Series to the PDP Compact in the hand, with only the shortened trigger reach requiring some adjustment. I have no idea what that says about me. And I’m not alone. One decidedly male, 280-lb. staffer liked the F-Series so much that he bought one—for himself. Question his masculinity at your own peril.