Boasting a truly unique design and appearance, the Mateba possessed features of both a revolver and a semi-automatic. Regretfully, such a radical departure from the norm was not received well by American consumers.

Americans have long been enthralled with small arms, as our nation is unique in their protected availability. But, once a standard for a particular style of handgun is established, we become a bit suspicious of anything that deviates from the norm. For example, consider a type of pistol that is firmly established in our gun culture—the light, small, concealable, defensive 9 mm semi-automatic pistol. That caliber requires a locked-breech design, so they have Browning-influenced, tilting-barrel-operating systems and DAO triggers. It’s familiar, accepted and sound. The resemblance from one make to the next is unmistakable. Moreover, when they were selling in big numbers, the same thing happened to the so-called “snubby” revolver. In other words, the company that produces a firearm that works or just looks different is going to face sales resistance at the gun-store counter.

It is understandable that we look at gun choices like this. But it can, and often does, cause us to overlook some decent guns. Not so long ago, there was a unique handgun on the market. It was an Italian import, made with best-quality materials to exacting specifications. Designed by an engineer unknown to our country’s arms industry, the Mateba was a magnum-class sporting revolver that incorporated some of the main features of a modern semi-automatic pistol.

Emilio Ghilsoni came by a plant equipped to manufacture food-processing machinery. Converted to a new role, the plant was soon cranking out big revolvers chambered in .357 Mag., .44 Mag. and .454 Casull. They not only operated differently, they also looked quite different. 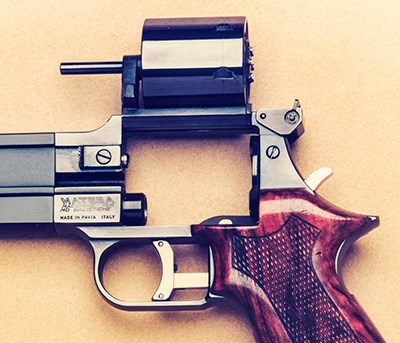 Like a modern semi-auto, the Mateba had an upper slide and a lower frame. The upper had the barrel and cylinder, plus typical adjustable rear and blade front sight. Barrels were available in several lengths. The Mateba cylinder held six rounds and swung out to the left. But, since Samuel Colt started this wheelgun business, revolvers have fired from the top chamber (at 12 o’clock). The Mateba fires from the bottom (6 o’clock). This means that the barrel is mounted below the six-chambered cylinder in an upside-down fashion. The entire upper recoils a bit when the gun fires. It would seem to be awkward, but there is no mechanical reason that it shouldn’t work.

Also, conventional revolvers have their barrels screwed firmly into their frames. The Mateba’s barrel-cylinder assembly (the upper frame) rides on a short section of rail located on its underside. A matching set of rails on the lower frame allow the upper frame to move back a short distance. This compresses a strong spring, which expands and drives the upper frame back into the battery position. The rearward push of the upper also cocks the hammer and turns the cylinder 60 degrees to align the next loaded chamber. The lower frame also houses conventional double-action/single-action lockwork for a first-shot double-action trigger pull. Subsequent shots are in single action.

Considerable effort went into doing pretty much the same thing as a conventional Smith & Wesson, Colt, Ruger or Taurus revolver. While the Mateba was beautifully made, with superb fit and finish, it cost a bit more to manufacture, import and market in the United States. Designer Ghilsoni was no fool, and was doubtless aware of another powerful “semi-automatic revolver” that operated in similar fashion. The gun was the very popular Webley-Fosbery, a British product. There are strong similarities in the recoiling system of that arm, but the Fossie barrel was conventionally right side up.

Why would he want to go to all the trouble in making the revolving aspect of this revolver in such an unconventional manner?  I am guessing he knew about a well-regarded Czech revolver of post-World War II origins which had a functional 6-o’clock barrel system. The effort was to create a more easily handled gun for bullseye shooting. Much of the discomfort of firing magnum ammunition comes from a rearward thrust along the line of the barrel, which is well above the hand. The Mateba’s low barrel axis means felt recoil that is straight back and therefore more controllable.

Further, the “semi-automatic” reference in the Mateba description is correct in the sense that a shot fired automatically cocks the hammer and cycles the cylinder. But, the gun does those things against the forward pressure of a strong spring. In effect, it is a shock absorber, and it really works. Back in the late 1990s, when the Mateba was young and I was younger, I had both a .357 Mag. and a .44 Mag. for review. Both guns performed quite well in terms of accuracy and reliability. They were also much easier on the shooter in terms of felt recoil.

The Mateba revolver did not prosper commercially. It was just too different—never made fightin’ iron. 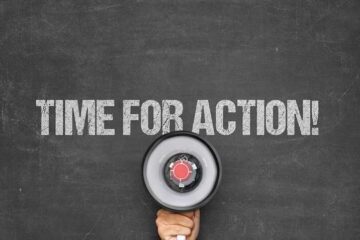