It took me a long time to become fully comfortable wearing a holstered firearm. I’ve been carrying concealed for only two short years, and in the beginning months I carried the gun without a round in the chamber. I’m by no means scared of guns — they are a part of my everyday life. As a rifle competitor, prior to obtaining my CCW license, loaded rifles stayed on the line. Walking around with a loaded pistol, though safely holstered just felt odd and kind of wrong. Gunsite Academy took my slight discomfort and replaced it with confidence. Not arrogance, but comfort in my equipment and ability.

This spring, I attended Gunsite Academy as a brand-new member of Mossberg’s SIRENS group, a select group of women in the outdoor industry who gather each year to train and grow together. I’ve long admired Linda Powell, director of Mossberg’s media relations and industry icon, and was honored to have received an invitation. She created the group approximately a decade ago with the goal of uniting women in a male-dominated industry. It’s transformed into something much more. This year, eight women gathered at Gunsite Academy in Paulden, Arizona, an elite school started by marksmanship legend Col. Jeff Cooper, to train with Mossberg’s MC2sc pistol and 940 Pro Tactical shotgun. Though SIRENS is a small, select group, everyone can learn from and share in the experiences.

Though Gunsite is famous for week-long pistol, rifle, shotgun classes and more, the SIRENS program was smaller and more custom. We had two days of red-dot pistol work and one day with Mossberg’s newest optics-ready shotgun. I had no experience with either of the specific guns. I’ll shoot anything, but rifles are my favorite, followed by pistols. My skill level runs the same way. Every single bit of training I had done leading up to this point was marksmanship-based, no matter the type of firearm. I wanted to hit center as many times as possible with as small a group as possible with rifles and handguns. A close friend has been teaching me to navigate a sporting clays course. 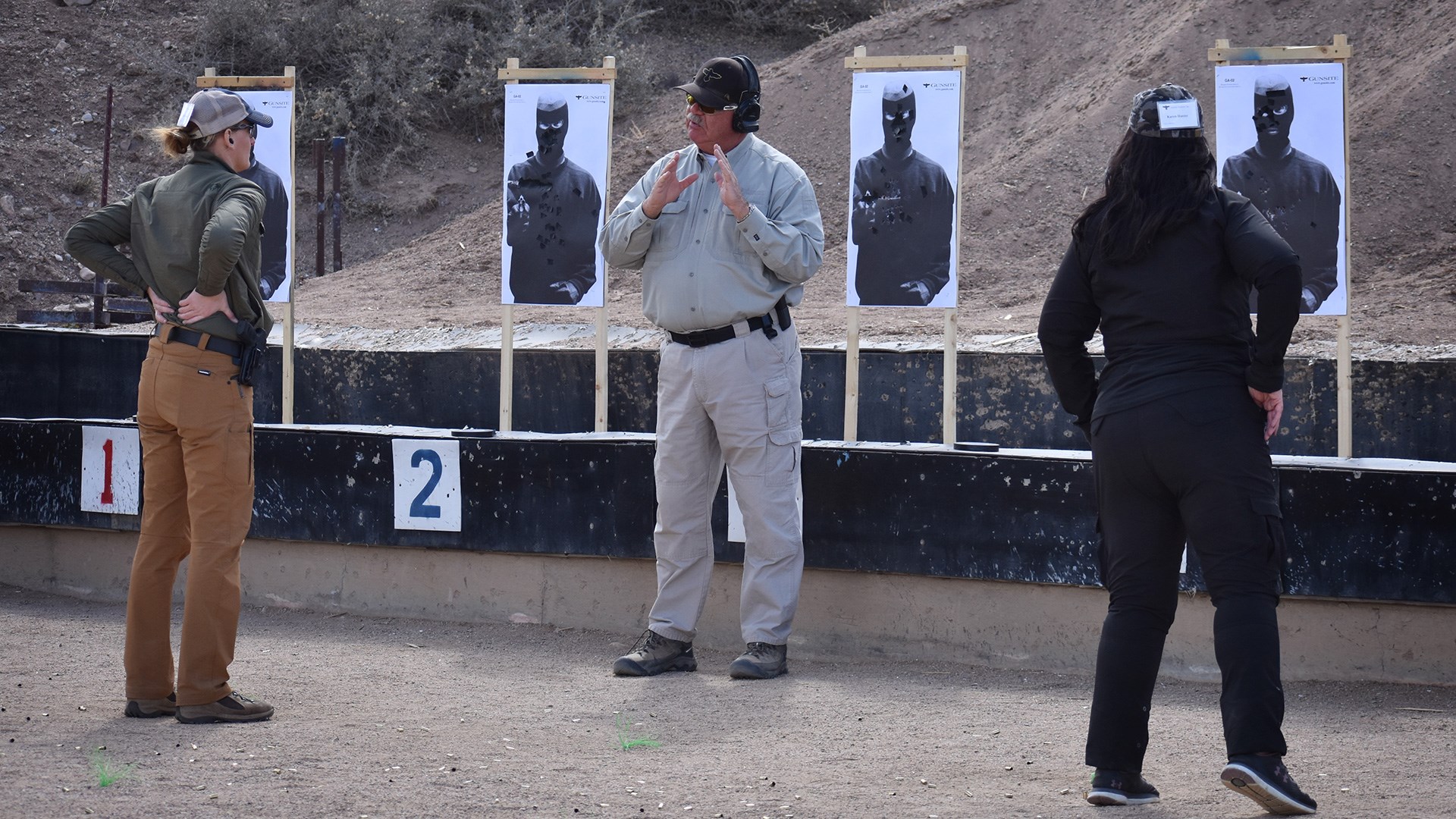 On the first day we started out with slow-fire drills at short distances. Everyone wore a DeSantis Kydex holster and mag pouch threaded onto a gun belt. We also had three magazines, one 10-round flush and two 14-round extended. Fully loaded, we each had 34 rounds of DoubleTap 124 gr. 9mm and some spares sliding around in a pocket. Round counts weren’t high and distances weren’t far, ranging from 3 to 15 yards. This was not to say it was easy. Instructors Il Ling New, Mario Marchman and training director Lew Gosnell worked with each of us on how to properly draw from a holster. I was slow at first, agonizing over every detail. There was no manual safety on the gun and I soon appreciated this fact. Targets spun sideways with very short exposures. Often, I didn’t get off all of the shots I was told to.

My biggest problem? Taking too much time. I also didn’t have the right mindset. I’ve always known a bad guy/girl won’t wait around for you to make a perfect shot. Sight alignment, sight picture, breathe….oh wait. Let me check my natural point of aim…. It isn’t realistic and wastes valuable time in a use of force situation. There needs to be a balance. The shots I made were mostly well-placed, but took too much time. Using a red dot definitely made a significant difference in quick target acquisition. I quickly became a fan of the failure drill, two shots to the body and one to the head. This was to mimic two shots being ineffective on an assailant, for body armor or some other reason. Knowing the shot needed to be good, I focused on speed with the first two and utmost accuracy on the last.

With a few exceptions, the pistol only left my hip to shoot and returned to its post shortly after – loaded and ready to go for the next drill. Soon it became second nature and I nearly forgot I had a loaded firearm on my hip. Over time I learned how to perform tactical and speed reloads. We shot at paper targets and steel, but also spent considerable time on simulators. The indoor simulators were shoot houses. We only used blue trainer guns in the first run, discussing strategy on how to navigate through a house to save/help a loved one. I’d only seen it in movies but never really thought about how to open doors or take shots from behind cover. The idea was always there, but I had never practiced it or thought about it in any detail. The second run included live-fire. Our instructors took us to a second house so we wouldn’t have prior knowledge of the layout. Though the goal was to identify and neutralize threats quickly without putting yourself at risk, I opted to take a much slower and educational route, stopping and asking questions. This is perhaps the thing I loved most about SIRENS and Gunsite — the ability to have your own experience. Gunsite instructors Aimee Grant and Il Ling New emphasized that each person coming to Gunsite has their own Gunsite experience. It’s about learning and finding what works for each individual. Sure, there is a structure and pace to be maintained, but there is room built in for you to ask for clarification or additional help on certain skills.

Tactical shotgun provided an even greater range of revelations. I had heard from several people what great tools shotguns are for personal defense. Very recently I took a Remington 870 12-gauge I had in the back of my safe and transformed it into a personal defense gun, switching out the stock and barrel and adding a few accessories. The pieces made sense and I knew how to use a shotgun, but there was a lot I needed to learn. The most interesting revelation was the difference in the types of shot used. While I am very particular about my rifle ammunition and reloads, shotgun ammunition has always seemed somewhat interchangeable to me. This is not the case. Gosnell demonstrated the difference in birdshot, buckshot and other self-defense loads at varying distances. I was astounded at the variety of patterns and achieved, some of which I would not trust my life to. The training day consisted of various exercises with the 940 Pro Tactical and Holosun HSS507K and both Federal clay target shotshells and Winchester Defender slugs.

The 7+1 capacity 940 Pro Tactical has an adjustable buttstock, allowing you to adjust length of pull. Proper fit is incredibly important and I needed the shortest possible length of pull. Recoil was relatively mild, though after dozens of rounds my shoulder still reminded me the next day. A knurled charging handle and oversized bolt release both made the gun easier to manipulate, though I continually shifted to my strong hand to reload. I quickly learned it’s imperative to always keep your strong hand on the gun and your finger in reach of the trigger. If performing reloads, with any kind of gun, do so in a way that relies on your support hand and keeps you ready. You don’t want to make yourself vulnerable for any length of time. I had never fired a shotgun with a red dot and really enjoyed it. The gun became more like a rifle with the brightness-adjustable dot. We shot at steel targets from various distances and had a friendly speed challenge at the conclusion of the day. 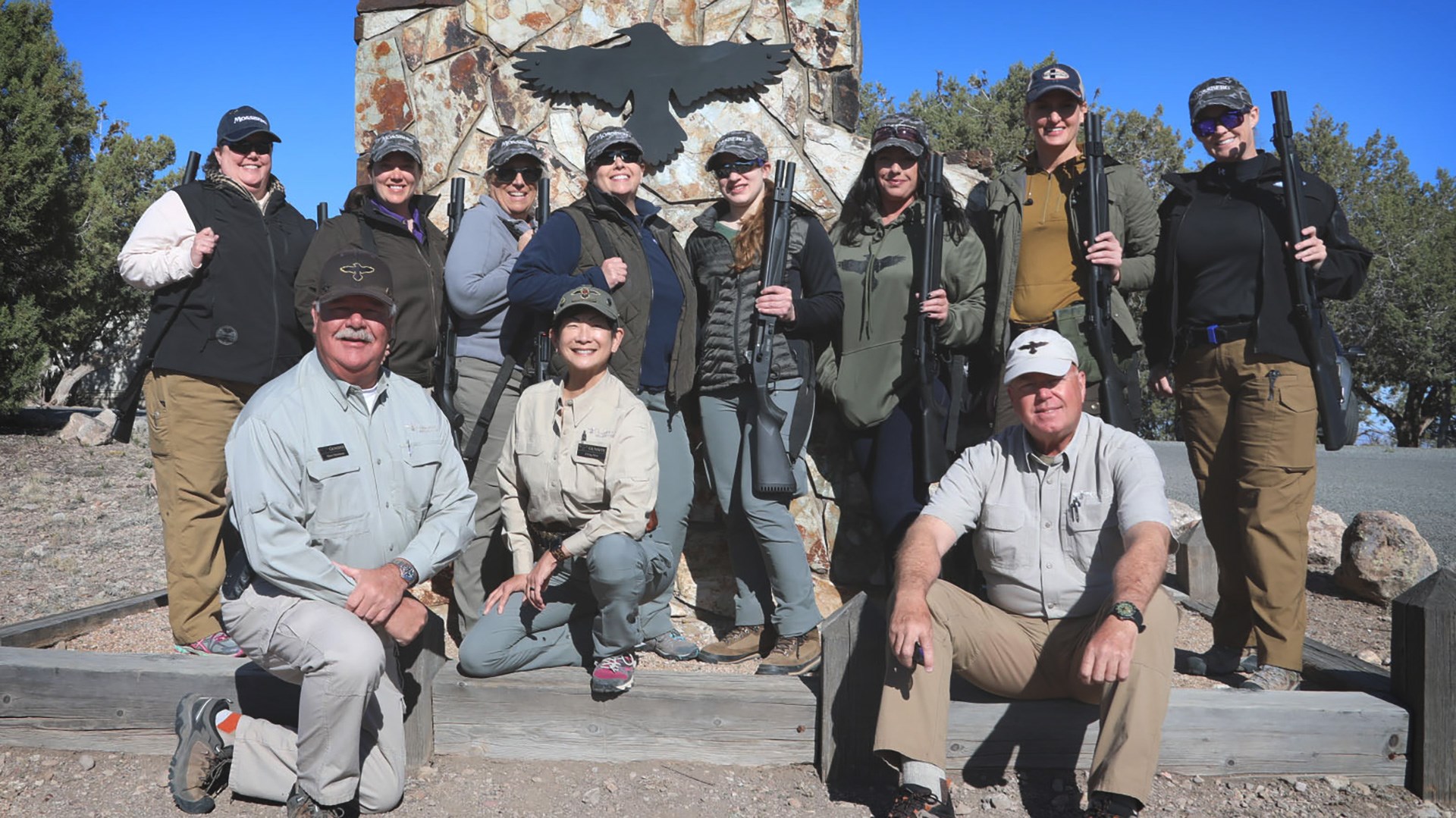 Everyone who has been to Gunsite Academy says it’s a life-changing experience. It affects everyone differently, but I emerged with a different mindset and knowledge of two firearms I had never touched before. What works in competition or at your local range isn’t always the best in a use of force situation. Gunsite’s great instructors not only taught me how to operate in a defensive situation, but how to think. Marksmanship is critical, of course, but I’ve been lacking the practice and training to defend myself to the best of my ability. I’m no ninja warrior and it’s still important to avoid conflicts, but I now I am much more comfortable than ever before in my ability to defend myself, which I never previously questioned. Gunsite had me question everything.