The fight to protect our Second Amendment rights never stops, but that’s because the enemies of freedom also never stop. 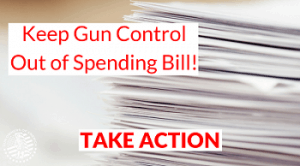 So far, Gun Owners of America has been successful at defeating the gun grabbers at every turn. But just recently, the anti-gun politicians have pulled perhaps their dirtiest trick yet.

Contact your Representative and Senators and demand they put a stop to this!

Because your elected officials are afraid of being on the record, leadership protects them by stuffing things they don’t think will pass on its own merits into what is known as the annual omnibus bill, or omni for short.

One would think because negotiations have been ongoing for years, politicians would wise-up to the fact no one wants gun control. Rather than listening to you, they would rather stuff VAWA into this upcoming omni and claim they had to vote for it to fund everything our government does.

Don’t let them get away with this anti-gun plot!

Thanks to pro-gun fighters like you, we were able to pressure lawmakers to remove anti-gun provisions such as the boyfriend loophole and red flag laws for military service members. However, this bill still contains some nasty anti-gun provisions that we will never compromise over.

One provision mandates the FBI and prosecutors to use their resources to persecute Americans who are deemed to be “prohibited persons,” even though 9 of 10 of these FBI determinations are flat-out FBI errors.

When more and more gun purchasers are reported to be waiting long periods of time for the FBI to perform its “Instant [sic] check,” the FBI is going to be diverting its resources to go after innocent Americans. And, although it’s also required to report when those denials were erroneous, law enforcement can take its own sweet time to do this.

It really is no coincidence that, out of the tens of thousands of recent FBI “denials” of firearms purchases, only 12 of the supposedly illegal purchasers were successfully prosecuted according to a GAO report in 2017.

In addition, another provision authorizes the Justice Department to make special appointments and deputizations to prosecute new gun control laws.

Click here if you are done letting Congress compromise with your rights.

It cannot be overstated, the omnibus bills usually have massive bi-partisan support, so you and every freedom-loving American need to get on this NOW. Let your Representative and Senators, be they Democrats or Republicans, know that a bi-partisan agreement to destroy the Constitution is unacceptable.

ATTITUDES SHIFT TOWARD RIGHTS OVER CONTROL AS GUN OWNERSHIP GROWS