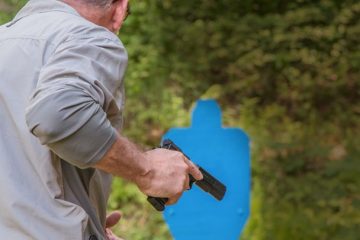 October 21, 2020 Guns In The News
Home»Guns»Handgun, Shotgun, or Rifle: Which is Best for Home Defense?
Guns

I’ve seen a number of articles regarding defensive firearms for protecting the old homestead. In most of them, the author makes a case for a shotgun over a rifle or a rifle over a shotgun. And virtually all of these articles talk about the small role the handgun plays. There is always a lot of good information in these articles, but I am going to take a different approach to the subject. In a properly set up home-defense plan, there is a place for all three types of firearms: the handgun, the shotgun and the rifle.

Obviously, the handgun is nearly always the least powerful of the three. It is also the most difficult defensive tool to shoot accurately. Its value, however, is the fact that it is the most portable of the three. That, of course, assumes a person will actually wear their handgun while in the home. We all try to stay as alert as we possibly can, but you and I know that isn’t always what happens. We often get completely involved in whatever is going on in our lives and, consequently, can sometimes be surprised. Being surprised by criminals is something to be avoided.

As a general rule, I suggest that a person carry the biggest, most powerful handgun that can be shot quickly and accurately. However, in the end, it is just possible that having a handgun—any handgun—on you is more important than what kind and caliber it happens to be.

In a market that has been caught up in a long love affair with semi-automatic rifles, I am beginning to see folks realizing the value of a shotgun for personal defense. I can tell you from personal experience that the defensive shotgun can stop fights before they ever get started, just don’t rely on the intimidation factor to work—be ready to use it. If it comes to an actual fight, a full load of 00 buckshot (properly placed of course) is so good that repeat shots are rarely needed.

Of the three types of defensive firearms, the shotgun is undoubtedly the most versatile. The home defender has access to birdshot, buckshot and slugs. Properly selecting from those three, just about any crisis can be managed quite satisfactorily. Living in a rural setting, I tend to use my shotgun the most to take care of venomous snakes, rabid animals and undesirable vermin in my yard. However, the same gun loaded with buckshot will do nicely in a gunfight to about 30 yards. And, again, the same gun loaded with slugs will deal with threats out to about 75 yards.

For the urban dweller, the shotgun is also an excellent choice. One advantage is the spherical shot loses velocity rather quickly. Because of this, the shot charge does not present as great a danger to others, and their property, in the immediate area. Having said this, of course, we have to keep in mind that we are always responsible for every shot we fire and the damage that might result. Just because it won’t travel as far as a conical bullet doesn’t mean you can ignore Rule 4.

Because I live in a rural setting, I prefer that my rifle be of the flat-shooting variety and be mounted with a scope. I’ve got a shotgun for the up-close work and need the rifle mostly for coyotes out across the pasture. But, that doesn’t mean a distant human threat isn’t a real possibility. After all, I’m not the only one with a rifle out here. As always, it’s better to have the right tool and not need it than to need the right tool and not have it.

The urban or suburban dweller, on the other hand, might be better served with a semi-automatic rifle in one of the common surplus calibers, say 5.56 NATO or 7.62×39 mm. An unmagnified reflex sight on such a rifle could be very useful for close-range situations that require a quick solution. Magazine capacity might be more important to that person than the ability to make a head shot on a coyote at 150 yards.

So, while I suggest that having all three firearm types is a proper armament for home defense, the actual types and calibers of the guns depends on a person’s individual needs. Another consideration that affects this choice is recognizing who in the family might be using these guns. Considering the needs and abilities of the smallest—or the youngest—person in the group may affect the choice of action type and chamberings.

It is important that the individual homeowner evaluate the needs and abilities of the entire family and choose home-defense guns accordingly. Fortunately, we have enough good guns of every type that just about every homeowner can be properly armed, based upon their needs and preferences.

The homeowner should find ways to conceal these guns about the dwelling so that they can be rapidly accessed when needed, yet out of sight to unauthorized visitors. One might rely on a nearby hall closet for such storage or some sort of old, closed cabinet that simply doesn’t look like a gun cabinet. Another option is to invest in one of the rapid-access gun boxes now available for both pistols and long guns, particularly in homes with children. Again, the homeowner has to use their own imagination and figure out what will work in their house. Keep firearms handy, but keep ’em out of sight (and secure, if needed), should be the train of thought.

There is an old adage that the fight is going to be what it is going to be. We can’t predict it in advance. That, I think, is the real justification for including handguns, shotguns and rifles in a home-defense plan.