June 30, 2022 Guns In The News
Home»Commentary»Handloads: A Light-Recoiling .32 ACP Practice Round
Commentary

Handloads: A Light-Recoiling .32 ACP Practice Round

There are still more than 1 million pistols in circulation chambered for the .32 ACP, although, today, it is generally considered to be an outdated defensive cartridge. But, with its relatively low operating pressure and velocity, the .32 ACP can be the basis of economical range fodder when loaded with common lead bullets. 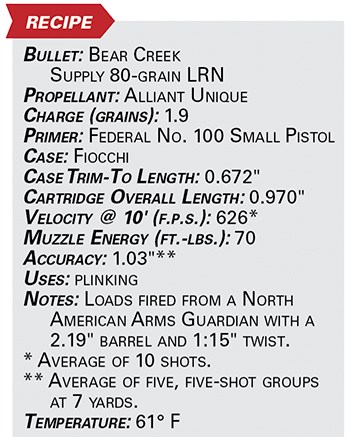 Pocket pistols chambered for the .32 ACP are built for concealability, not ergonomics, so a soft-recoiling load can help stave off blisters and pinched skin. This recipe starts with once-fired Fiocchi brass that is cleaned, re-sized and primed with standard Federal small pistol primers. Once prepped, a mild 1.9-grain charge of Alliant Unique is all that it takes to produce respectable accuracy without the associated kick of defensive ammunition. Lyman still produces a mold for a compatible bullet (#311252), but Bear Creek Supply makes an 80-grain round-nose projectile that saves an afternoon’s worth of work, and these bullets feature a proprietary coating that keeps both the gun and the reloading operation clean.

Lee’s Carbide die set is the most affordable way to address tooling and even includes the required shell holder, which is an odd duck these days. The seating die features both a taper-crimp and a roll-crimp option, and as this cartridge headspaces on the rim, it’s dealer’s choice on which to use. I like to go with a mild taper crimp, as not much is needed to keep these bullets in place under the scant recoil of this particular load. For best reliability, I seat to an overall length of 0.970″, but feel free to adjust to fit your specific magazine.

Out of 2″ barrels, you can expect velocities north of 600 f.p.s. and a bit more out of longer barrels. Firing five-round groups that measure less than an inch is no tall task for this cartridge in the hands of a capable shooter. If your marksmanship isn’t there yet, don’t worry—a single pound of powder yields 3,500 rounds, so you’ll have plenty of opportunity to practice.

Handloads: A Light-Recoiling .32 ACP Practice Round